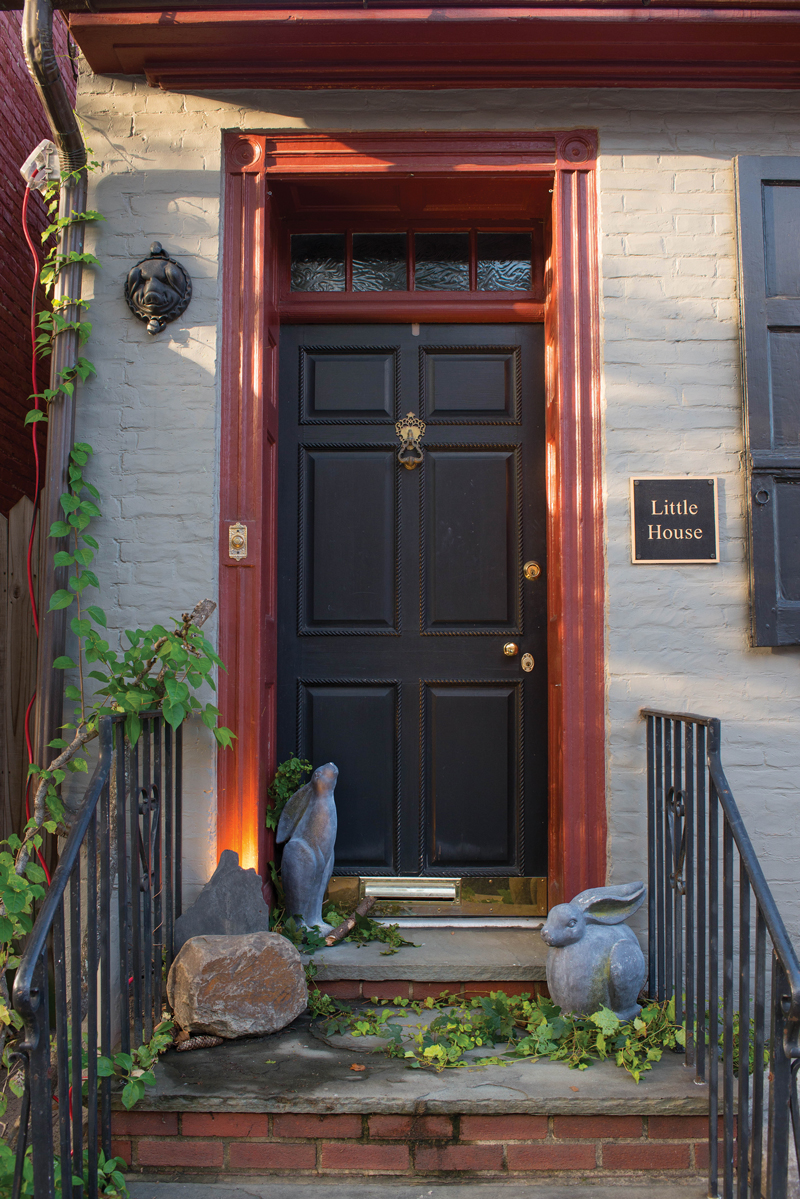 Over the last several years, a lifestyle known as living small has come into vogue. Not only have smaller homes captured our imaginations, but lifestyle gurus such as organizing consultant Marie Kondo are making us rethink our penchant for accumulating stuff. Then there are the Danes, the happiest people on Earth, who subscribe to the notion, “Less stuff; more life.” What’s it like to live small? Lancaster’s Lisa Bowman shares what she has learned.

Ten years ago, Lisa was emerging from a difficult time in her life. She had served as her mother’s primary caregiver and, when the mother of a good friend who lived on the West Coast began to experience failing health, Lisa served as a liaison between the two.

In the aftermath of the deaths of both women, Lisa deemed it was time to turn to her favorite coping mechanism and tackle a project. She spied what would become her project as she was driving through the city. A tiny house that sat on the edge of the business district caught her eye. The for-sale sign had just been posted. “I thought to myself that it’s strange for me to want to buy a house,” she recalls. On second thought, it made perfect sense. Thanks to her inheritance, she had the money she needed, and because of the recession, the real estate market wasn’t exactly booming. 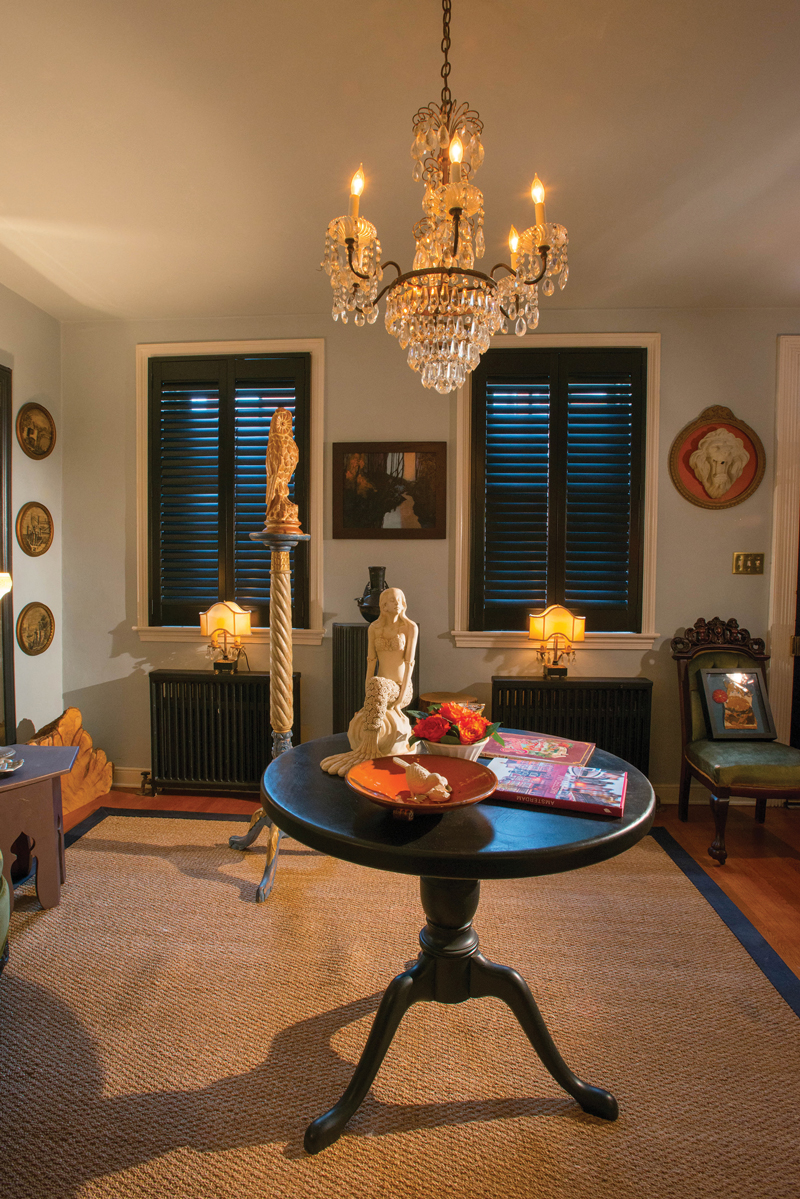 She made an offer, and the house was hers. “It became my therapy,” she recalls. “I really indulged myself. I love history, and I love aesthetics,” she explains, referencing her history degree from American University (plus a fascination with Lancaster’s past) and 15 years spent as a floral designer, which took her to places such as Great Britain (to study) and Southern California (for a change of scenery).

The house provided the best of both worlds. As for Lisa, she has come full circle and has been working in the realm of heritage tourism for the past 15 years; she is currently on staff at the Lancaster Office of Promotion. Because of Lancaster’s growing reputation as a very livable city, Lisa finds herself fielding her share of questions from potential city dwellers who stop by the Visitor’s Center. 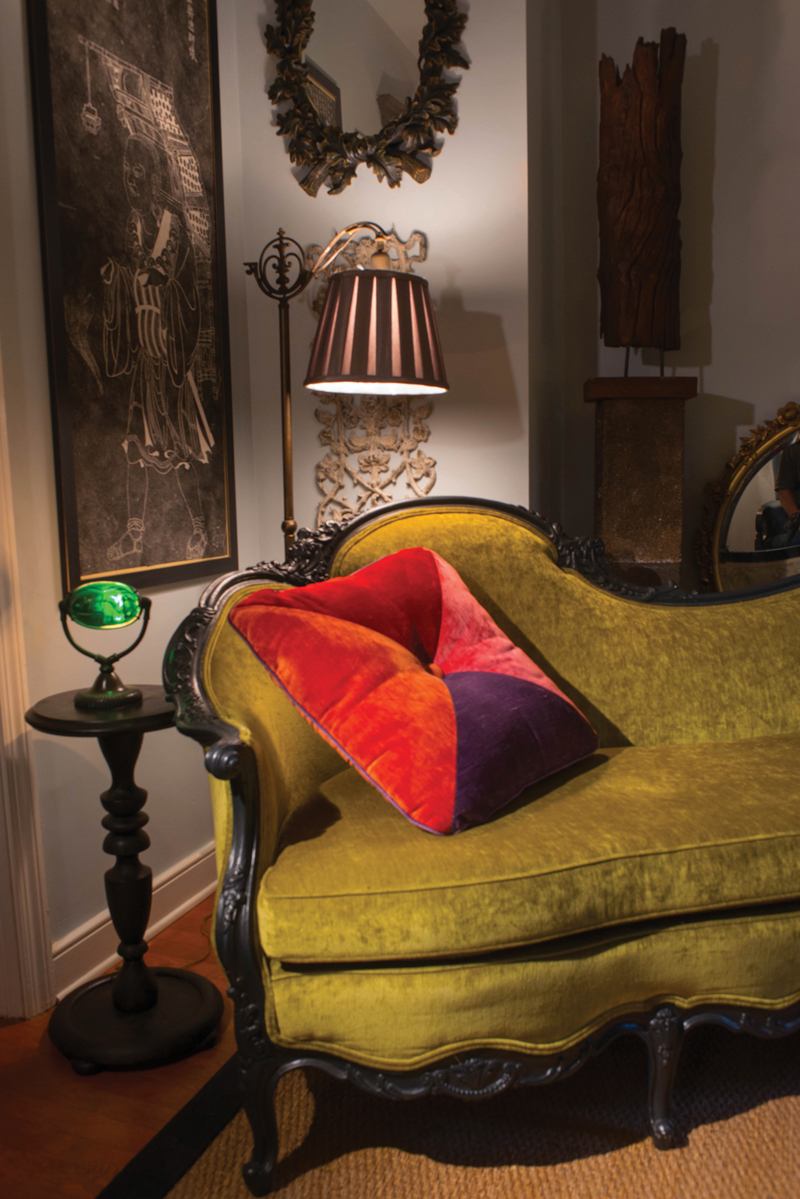 Fortunately, she can speak from experience. “This is the fourth different house I’ve lived in,” she says of Lancaster. In addition to D.C., she’s also lived in Philadelphia and New York. She’s traveled extensively through Europe and laughs that two close friends are Dutch and consider her house to be huge. “They wonder why Americans have such large yards – they never see anybody in them,” she shares.

As with any successful project, teamwork is vital to its outcome. Lisa assembled her team and went to work. “The transformation of the property was a group effort, showcasing some of the best of Lancaster County’s many talented professionals,” she says with pride.

Despite all the time and effort she devoted to the project, Lisa doesn’t regard the house as hers. “A lot of people have lived in this house,” she remarks. “Like them, I’m just passing through. One never ‘owns’ an old house. The investments you make are simply helping to preserve it for the next generation.”

The earliest records for the house date to 1835. “But, it’s probably older than that,” Lisa says, pointing out that its location meshes with the city’s Colonial period. “You go farther out, and the architecture transitions to Victorian,” she explains. Neighborhoods filled with rowhouses reflected Lancaster’s manufacturing prowess. She surmises that other houses on her block also had humble beginnings but expanded upward as their owners’ economic status improved. 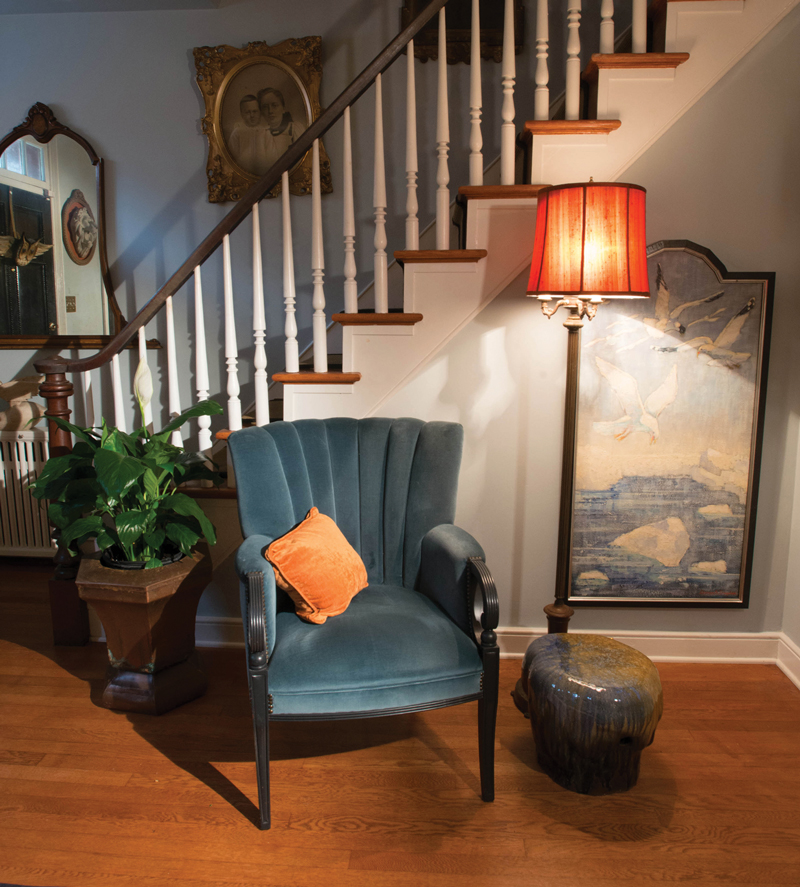 History literally surrounds the house. An early Mennonite cemetery was located behind the property (it was taken over by the Elks Club parking lot), and historians once surmised that the remains of the Conestoga Indians who were massacred a few blocks away in 1763 were interred there. The rail line that made its way across the city from the east also passed behind the house. Lisa finds it fascinating to know that Lincoln’s funeral train traveled by her house. She says the historical footnotes serve to provide her with a “sense of being part of something bigger.” 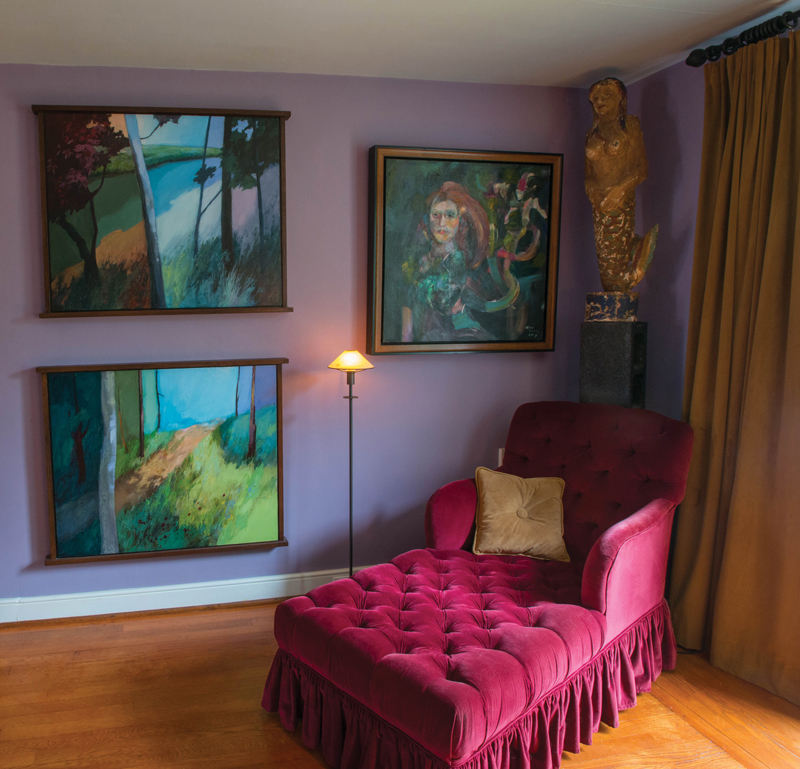 Then, there’s Lisa’s home, which offers approximately 960 square feet of living space. The first floor contains two multi-purpose rooms as well as a small galley kitchen. Upstairs, she combined two small bedrooms to create a master suite (which includes the house’s only bathroom). Similar-sized houses dot the city. In fact, a friend of Lisa’s, Amber Strazzo, lives in one that measures in at 625 square feet.

However, Lisa considers her rather spacious backyard, which offers nearly 400 square feet of additional space, to be an integral part of her home. The patio provides space for dining during all but the coldest months. The garden “rooms” and a second-floor deck provide space for entertaining.

Creating a garden was the first item on Lisa’s to-do list. “It was pretty much a slag heap back there,” she recalls. “Two truckloads of debris were removed from the yard.” From there, Lisa designed a garden around the trees that remained. “I created depth and space by including lots of things to look at,” she says. Large rocks not only anchor the garden, but also provide seating. Garden art is of the natural variety and includes flagstone that’s been turned upright to mimic modern sculpture, a water feature and tree branches set into oversized containers. 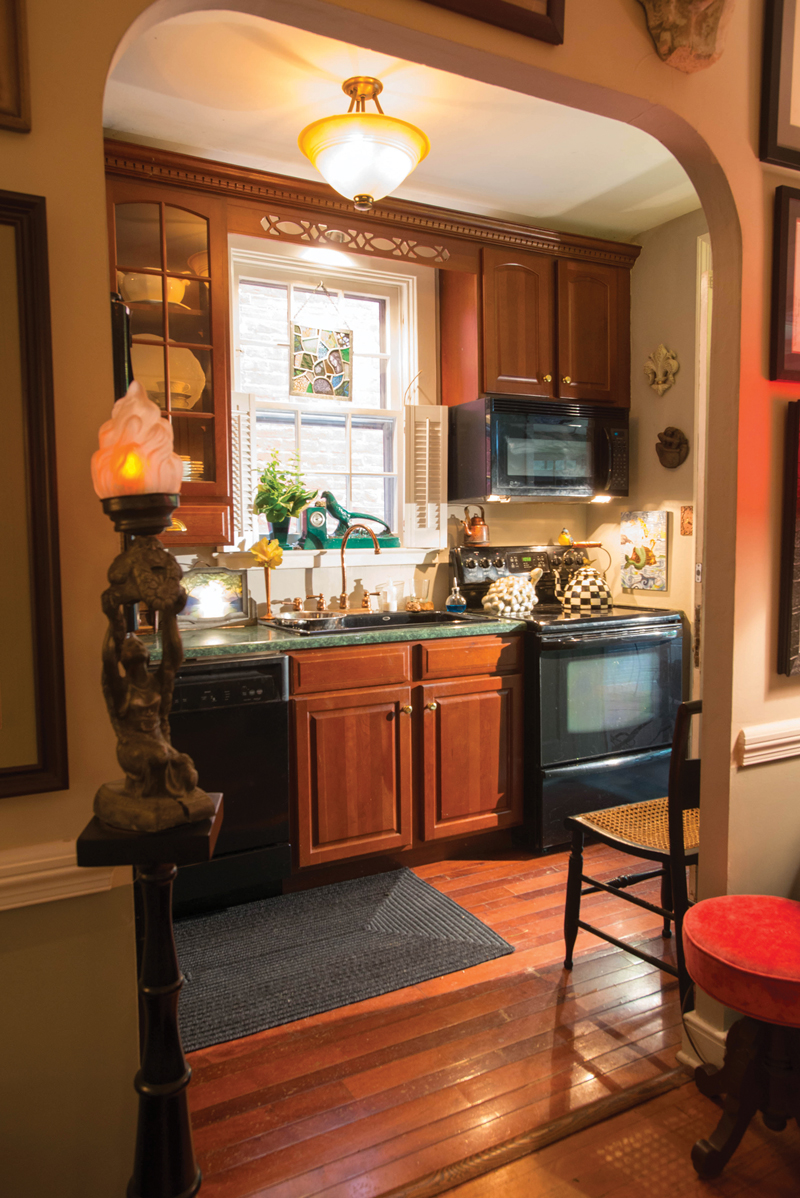 Nearly all of her building elements are of the found variety. For example, piles of discarded bricks provided the foundation for a path that winds through the garden. Shade-loving plants such as ferns, hosta and wild ginger made their way from friends’ gardens to Lisa’s. “The backyard gets very little sun, so the emphasis is on foliage and not flowers,” she explains. Lighting fixtures that were removed from the front of the house now hang in the backyard, where they illuminate the area via candle power. She also adores old tree stumps, explaining that she views them as “the chain of life,” in that they attract bugs, which in turn attract birds. “Lots of natural activity goes on in a tree stump,” she says.

The natural look extends to the front of the house. “I needed something to break up the expanse of concrete – it was too sterile looking,” she explains. Because of the southern exposure, planters would be high-maintenance. “And, I needed something that couldn’t move, so I thought of using the rocks,” she continues. During a trip to Penn Stone, she found exactly what she wanted.

Working with Joel’s Painting, Lisa devised an exterior color scheme that she carried indoors. Soft gray partners with black. Outdoors, the duo is joined with burgundy accents. Upstairs, the aesthetics change, as the walls of Lisa’s bedroom are painted a vivid purple.

Lisa looked to history in decorating the first-floor rooms. “Having rooms serve only one purpose is a modern concept,” she explains. “At one time, rooms served several purposes.” Consider the original log cabin – the open interior space served as a kitchen, dining room, living room and bedroom. 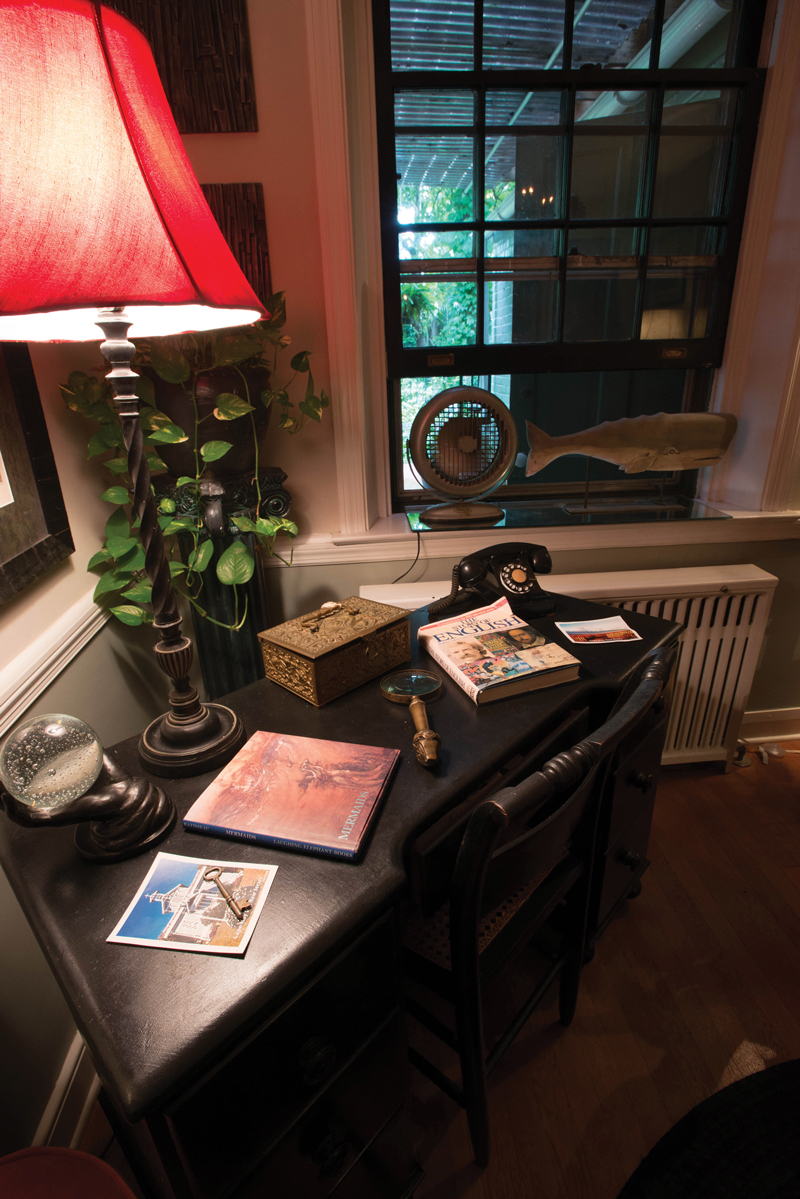 In Lisa’s case, the front room functions as a parlor. It’s furnished with a small period sofa and a variety of occasional chairs that can be moved about. A table in the center of the room does double duty, as it provides a display area for art and flowers or serves as a place for dining. “Everything multi-tasks in this house,” she remarks.

Black plantation shutters echo the color of the front door and exterior trims. They not only provide privacy, but also climate control. (There’s no central air and minimal insulation.)

The second room is more casual. A desk multi-tasks as a bar and a custom-made ottoman often serves as a dining table. In such cases, Lisa places sheepskin rugs on the floor as seating. “First-time guests are sometimes confused but end up loving to sit on the floor to eat and socialize,” she says.

As for the decor, Lisa feels she has assembled an “interesting collection of odds and ends” that reflect her past and her interest in art. She also has a keen eye for finds and subscribes to the notion that one man’s trash is another’s treasure. For example, a client was preparing to trash two crystal chandeliers when Lisa offered to take them. She fished a club chair (circa 1930s) out of a dumpster in Philly and had it recovered. The art that fills the house represents finds, auction buys and family pieces.

Through living in a house that offers less than 1,000 square feet of living space, Lisa has learned to be creative and judicious. She agrees with the thought process that if something isn’t being used, it needs to find a new home. She also agrees with Marie Kondo’s philosophy that if it doesn’t bring you joy, it should go.

In her estimation, living small naturally imparts self control. You find yourself making fewer impulsive purchases. With limited storage space, you learn to make do. For example, Lisa has one set of dinnerware. Ditto for wine glasses. Clutter is kept to a minimum by being space specific – everything has a space. If something comes into the house, Lisa does her best to eliminate something.

“I love my Little House in the city!” Lisa says. “Jane Austen once said, ‘There is nothing like staying at home for real comfort,’ and I couldn’t agree more!” 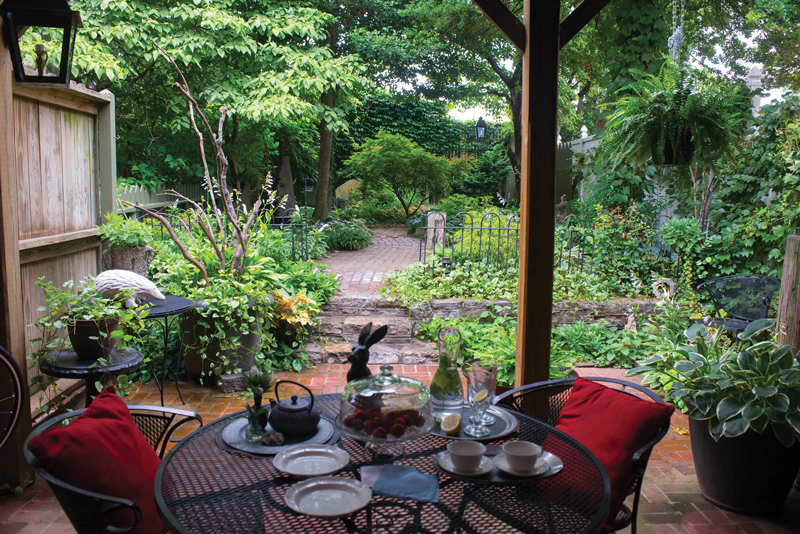 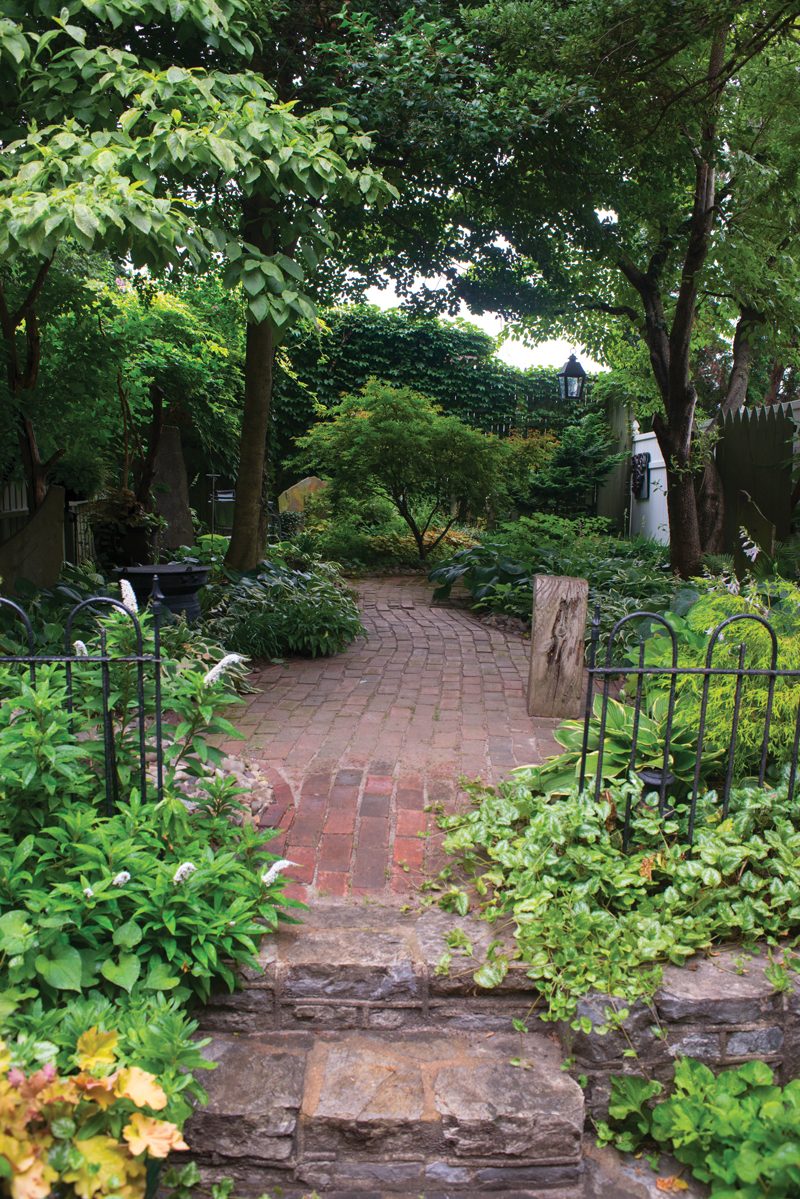 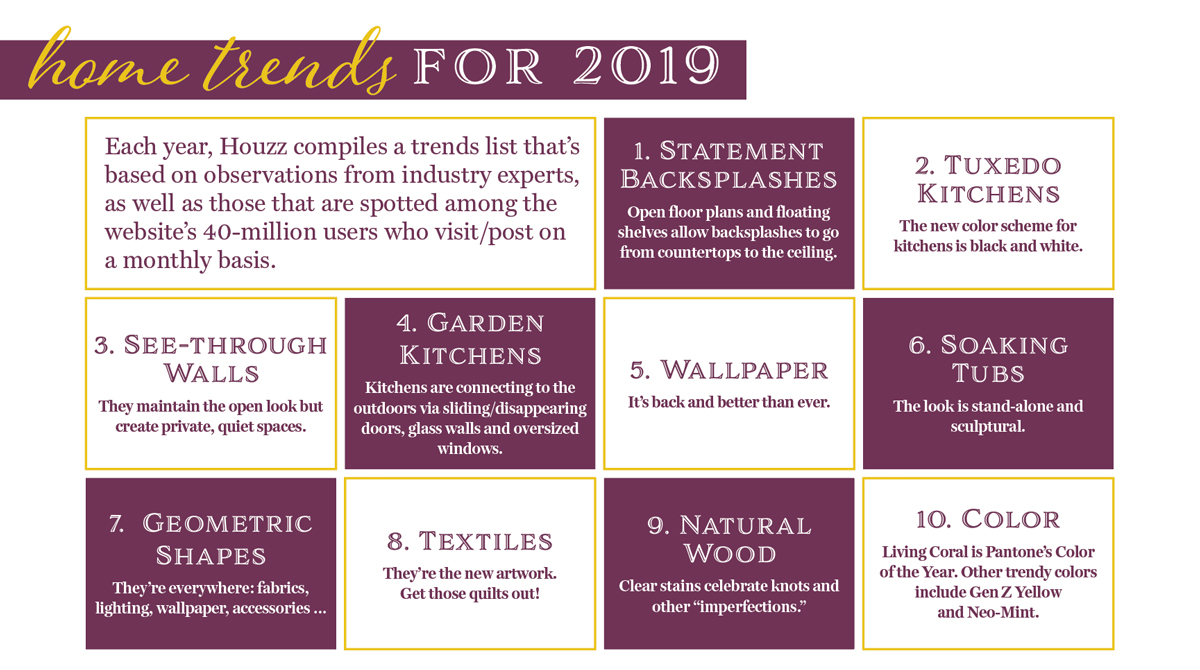 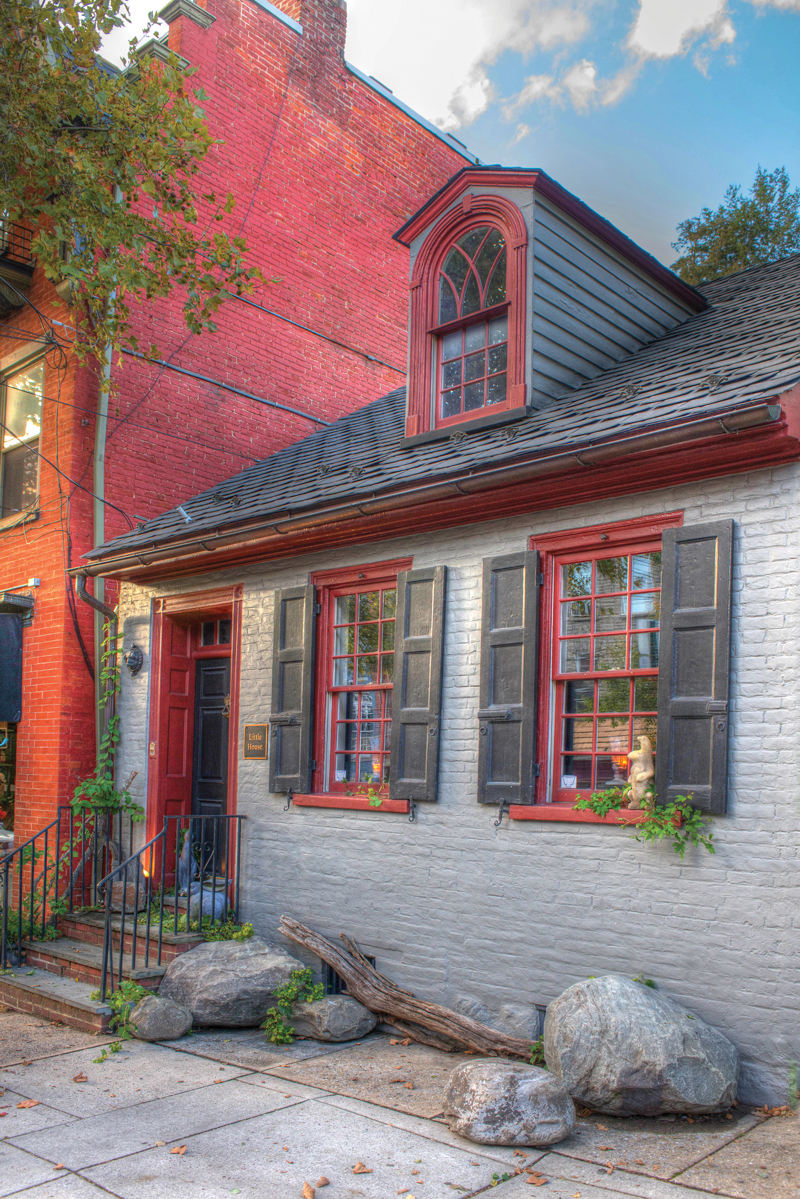