Howard Field has always loved to cook. He is such a good cook that Angela, his wife of 40 years, let him take the reins in their kitchen. It’s only natural that this avid cook devours the food section of the newspaper.

About seven years ago, Howard came across a recipe for Fromage Blanc cheese. As it was a snowy Sunday morning in February, he thought, why not try it? He grabbed a carton of Turkey Hill milk from the refrigerator and fearlessly proceeded with the recipe. He found the process interesting and began searching for other cheese recipes. Over time, family and friends willingly became his taste testers. He had some great successes in the beginning (and some not so great), but in time he honed a skill for making cheese.

One day he came home from work and announced to Angela he had left his sales job of 35 years in order to make cheese on a full-time basis. With four daughters, all Angela could envision was college and weddings in their future. She nearly hit the floor at his news of walking away from one career and launching a new one. But, with faith in Howard’s cheese-making skills and his sales expertise, she promised she’d be with him all the way.

Thus began the advent of Farm Fromage – a farm-to-table cheese company whose mission is to share the fresh local cheeses of Lancaster County with markets and customers wherever possible and, at the same time, support sustainable small dairy farms. Essentially, Farm Fromage helps farmers and their families thrive and survive on their farms.
In the beginning, Howard would drive around the county in search of signs that read, “Raw Milk.” Once found, he would stop and talk with the farmer. “I never had any problems striking up conversations with people,” he says, crediting his sales experience for this talent.

He liked the idea of using raw milk because it produced a more flavorful and finer cheese. And, it’s a proven product, as raw milk cheese has been around for over 7,200 years! “Anything our grandmothers and great-grandmothers ate is probably the way we should be eating today,” he remarks. “People were a whole lot healthier then.”

According to howard, two different kinds of cheeses are available today. “We have crafted cheese,” he says of artisan varieties that are handmade in small batches, “and krafted cheese,” which is made by large corporations and doesn’t have the benefits or flavor sensations raw milk provides. In his opinion, raw milk contributes to wonderful cheese flavors, helps local farmers and aids the local economy. Another plus is free probiotics.

Cheese can be made from any milk – cow, sheep, goat, water buffalo or even a camel. Howard is aware of people in the county who are now raising camels. The most expensive cheese in the world is made from the milk of the Balkan donkey and can cost as much as $600 a pound.

Every cheese is basically made of milk, cultures (for flavor – either natural, freeze-dried or made from yogurt or buttermilk), enzymes (rennet, which causes the milk to coagulate) and salt.

Artisan cheese is handmade in small batches – always with love, but not always from raw milk. “The flavor difference can be incredible between raw and processed cheeses,” he notes.

When asked who makes the best cheese, Howard is quick to say  Lancaster County. In his opinion, great cheese no longer has to come from foreign lands. “Nowadays, if you want a really good foreign cheese, you can get it in Oregon, Vermont or New York. If you want great local cheese, you get it in Pennsylvania,” Howard informs.

Farm Fromage began with just two farms, one cheesemaker and six cheeses. Today, the company is associated with 15 small family farms and six cheesemakers from across Pennsylvania. The selection has grown to more than 30 world-class cheeses made from raw cow, goat and sheep’s milk (as well as a raw cow and sheep’s milk blend). The company also offers a pasteurized cow’s milk cheese, Angela’s Pillow, which Howard describes as “a real crowd pleaser.”

“The definition of a great cheese is one you want another taste of,” Howard maintains. He likes to say he sells a 5-mile cheese – you’ll be down the road 5 miles and you can still taste the wonderful cheese on your tongue! A great cheese will have you wanting more.

Having no storefront, Howard conducts much of his business online, which allows him to stay in the field and personally work with his suppliers and many contacts. Farm Fromage products are also available at farmers markets (Green Circle Organics at Central Market, and as far away as Philly and D.C.), specialty stores (Lemon Street Market), restaurants (Lancaster Brewing Company and Federal Taphouse) and wineries (Waltz Vineyards).

It was through a farmers market that Howard acquired his first famous client: celebrity chef and Food Network star, Emeril Lagasse, who owns Emeril’s Chop Shop and Emeril’s Fish House in Bethlehem. He is also proud of the fact that  Junto in Chadds Ford (modern farmhouse cuisine) and The Forebay and Fire & Grain, both at the Hershey Lodge, feature cheeses from Farm Fromage.
In addition, Farm Fromage cheeses are sold at art & craft shows, wine events and garden expos.

For a complete list of Farm Fromage products, as well as a list of where you can find them, visit farmfromage.com. 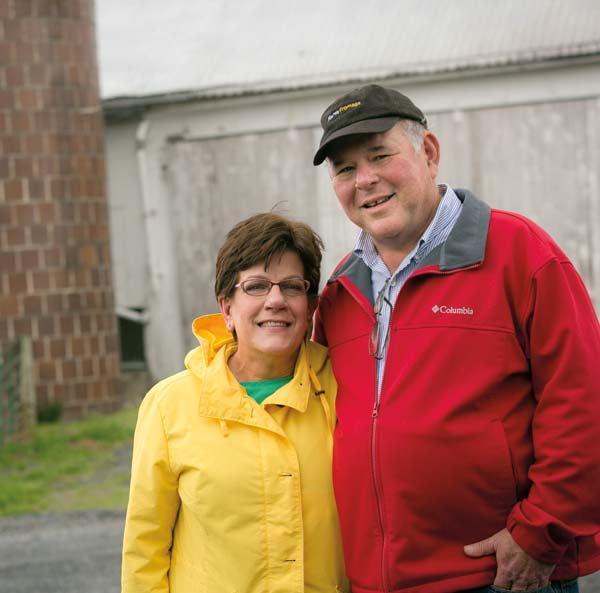