The ‘60s were a time of dramatic change. A young, dynamic president took office. The racial divide took center stage. A man landed on the moon. War was being waged in Vietnam. The generation gap widened. College students demonstrated … against everything. Mother Earth became a rallying cry.

Yet, things stayed the same. In Lancaster during the late ‘50s and early ‘60s, the baby boomers turned out in force on the Saturday after Thanksgiving to welcome Santa Claus to town. Visiting Santa at Watt & Shand was a rite of passage.

Meanwhile, in Wisconsin, the Aluminum Specialty Company was in the process of creating a holiday icon – the aluminum Christmas tree. Tom Gannon, the company’s toy sales manager, happened to be in a five-and-dime store in Chicago in 1958 when he spied a homemade metal tree on display. Ideas began to spin in his head and upon returning to the company’s headquarters in Manitowoc, Wisconsin, he successfully presented his idea for a metallic tree to its management team. The company’s design team went to work.

In 1959, the company’s metallic tree hit the market. Consumers snapped them up at an unprecedented rate. After all, aluminum was perceived as being modern. It also embodied the look of the Atomic Age and epitomized the holiday decor one might find at the futuristic home of the Jestons. The fact that it was being touted as a “permanent” tree as opposed to an artificial one, appealed to a generation that was already looking for the convenience factor in their lives.

In the early ‘60s, the company’s designers went back to the drawing board and created an improved product that was christened the Evergleam. To quell customer complaints that the tree could not be strung with lights, the color wheel, which projected light onto the tree, made its debut.

The tree ruled holiday décor until an infamous night in 1965. Americans tuned in to their televisions to hear a boy named Charlie Brown rue our attachment to all things artificial – specifically pink-hued aluminum trees. He suggested we should honor living trees, no matter how misshapen or scrawny they may be. The shiny trees lost favor with the public, and production at the Aluminum Specialty Company ceased in 1969.

Down in the mountains of North Carolina, farmers rejoiced. They had discovered a tree that grows like a weed – albeit a slow one – in their corner of the South. The little-known tree was the Fraser fir. Co-ops were formed, helping the Tar Heel State become a force in tree production. (FYI: According to the National Christmas Tree Association, the top five tree-producing states are Oregon, North Carolina, Michigan, Pennsylvania and Wisconsin.) The Fraser hit the big time in 1970, when a North Carolina-grown tree was displayed in the White House.

Over the past 50 years, the popularity of aluminum trees has ebbed and flowed. The vintage craze has helped to revive interest in them. Fans of Christmas, whose homes feature multiple trees, often include them in their holiday decor. And, they do prove to be topics of conversation. People tend to love ‘em or hate ‘em.

Dawn Fisher’s tree, which typically goes up the week of Christmas because she is so busy working on clients’ homes or places of business, pays homage to the past in that it’s aluminum. However, it’s also very 21st century due to its fullness, the fact that it can be strung with lights, and its “needles” are a combination of silver and black, which adds texture and dimension. Last year, Dawn decorated it with a color that has become a hot holiday hue, turquoise. Pops of red were delivered with faux amaryllis blooms. “I kept it up through February,” she reports. Indeed, once she removed her Santas, the room took on a winter theme, as the snowflake-lined windows and snowmen demonstrated their staying power.

For Dawn, who is originally from Annville in Lebanon County, Christmas is a year-round project. “Whatever I look at, I ask myself how it could be incorporated into Christmas,” she says, whether she’s shopping in July or December. While many of us sleep in on December 26, Dawn is up at the crack of, well dawn, in order to hit the after-Christmas sales. “I invest my income in after-Christmas sales,” she explains. “I probably have enough ornaments to decorate 50 trees,” she says of her stash. Her newest endeavor is collecting harvest-related items. “A lot of my commercial clients now want to put up harvest trees,” she explains.

Dawn cherishes her relationship with Jim Morrison and the National Christmas Center. “Jim gets you excited about Christmas,” she says. She also shares that Martha Stewart is a fan. “She’s borrowed some things from the center,” she reports, explaining that the items often serve as the inspiration for the ornaments she designs for her brand. The National Christmas Center has also been featured in Martha Stewart Living magazine. “They were supposed to do a photo shoot at the Center on September 11,” Dawn recalls of that day in 2001. “I spent the entire night of September 10 working on one of the displays.” Dawn emerged around 10 a.m., only to learn what had taken place in New York. “I had no idea what people were talking about,” she says of being immersed in her own little world of Christmas. The shoot, of course, was rescheduled and Dawn likes to think that the staff’s eventual trip to Lancaster provided them with a pleasant escape from reality. 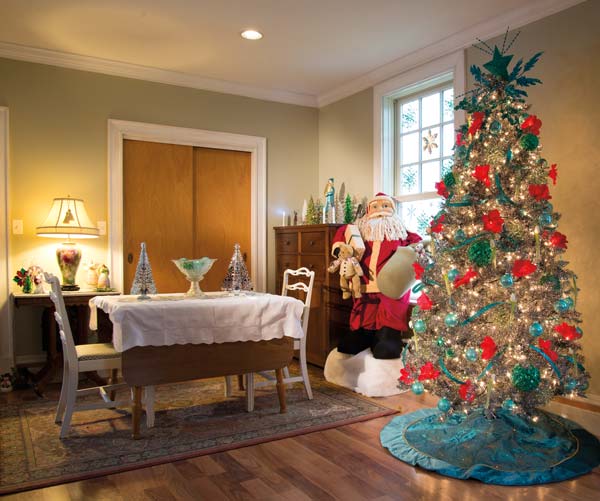 A corner of the main floor of Dawn’s Millersville home has a decided vintage theme. Last year, she utilized a red and turquoise color scheme for the space during the holidays. Turquoise/teal was a popular ornament color back in the ‘60s, so it’s right at home in Dawn’s interpretation of a vintage holiday. The focal point of the room is an aluminum tree whose needles are silver and black in color. Her collection of miniature trees tops the dining table and chest. Because Dawn is so late in putting up her tree, she keeps it in place through Valentine’s. Her snowman collection and the snowflakes on the window panes add to the post-holiday winter theme.