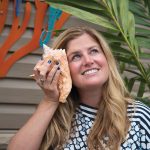 Who hasn’t collected seashells with the idea of doing something artsy with them? Andrea Schopf has done just that; this month she will exhibit her shell creations in the 80th Annual Sanibel Shell Show.

Andrea has loved shells since childhood. She remembers family vacations in Ocean Grove, New Jersey, where she “fell in love” with a store that sold seashells. She traces her fascination with shells to the fact that as a young girl, she was “always interested in the buttons and beads” her Italian grandmother stored in her sewing box for sewing and mending projects. “I’ve always been drawn to colorful things,” she adds.

Richard Ressel, her art teacher at Lancaster Catholic High School, was “a huge inspiration. He always had projects going on in our classroom,” she says, noting that she and her classmates witnessed his famous “Cabbage Hill” series come to fruition. Andrea also remembers being especially interested in a particular seascape he was working on whose centerpiece was a shell. “I just loved that painting,” she says.

Andrea, who graduated from Bloomsburg University with a degree in fine art, loves shells for another reason: “They give me something to do at the beach. I’m an active person,” she explains. “I’m not one to sit. If there’s a beach, I’m looking for shells.”

She also likes the solace shelling provides. “It’s very peaceful. I’m in my own little world when I’m looking for shells,” she remarks. And, she likes the challenges shelling provides. In fact, Coastal Living magazine equates shelling to fishing, as it involves patience, luck, wind direction, currents, tides and moon phases. “You do need to be aware of the tides,” Andrea agrees, explaining that shells are most plentiful at low tide. “If I need to be on the beach at 4 a.m., I’m there. I just put on my head lamp and go.” Shelling also introduced her to the world of snorkeling.

Shelling does have its detriments. Assuming what shellers call the “Sanibel Stoop” is often blamed for back issues. “It’s probably why I had to have back surgery last April,” she admits.

A World of Shells

Fifteen years ago, Andrea happened to read a magazine article about one of the shell capitals of the world: Sanibel Island in Florida. “I thought to myself, ‘I need to go there.’” Several trips followed. Then, five years ago, she attended the Sanibel Shell Festival, the highlight of which is the Sanibel Shell Show. “It was so inspiring!” she says. “That’s when I started gluing seashells on everything!” This year, the March 2-4 festival and show, which began as a country fair and grew into a celebration of shells (it’s sponsored by the Sanibel-Captiva Island Shell Club), is celebrating its 80th anniversary. Andrea will be entering a number of projects, including the bust that is seen on the cover. 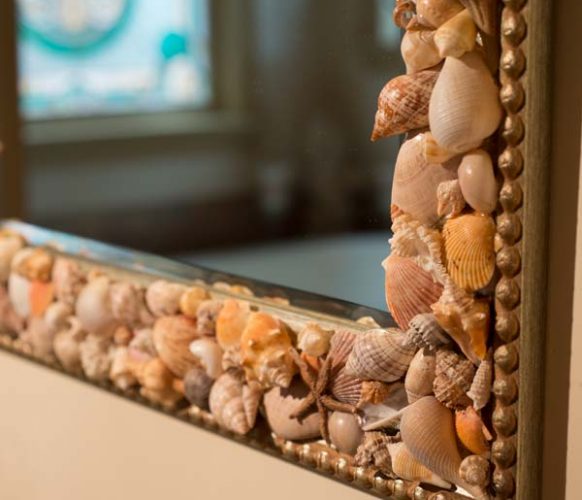 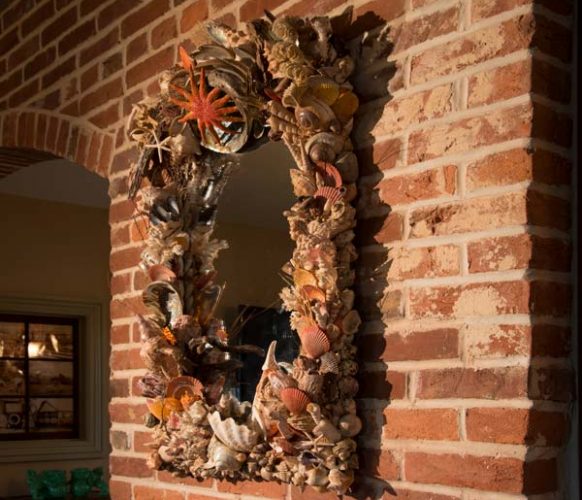 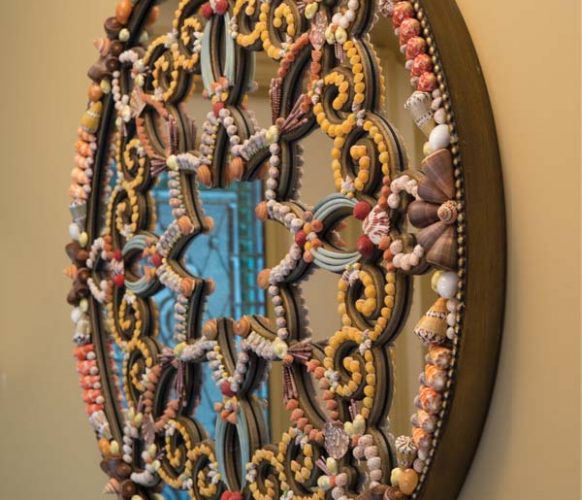 Shells from the Philippines were used to decorate this mirror. 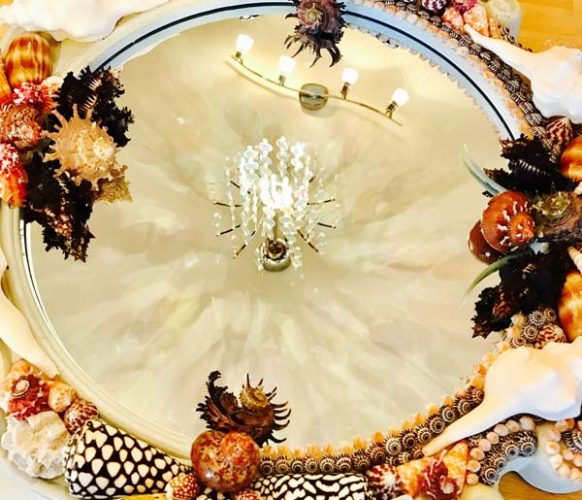 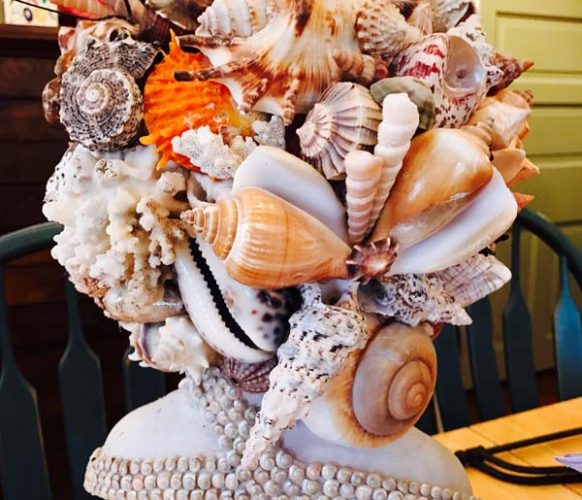 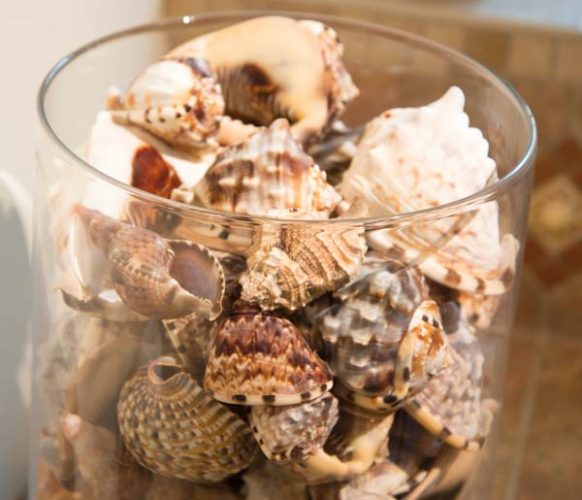 Glass cylinders are filled with shells from Haiti. 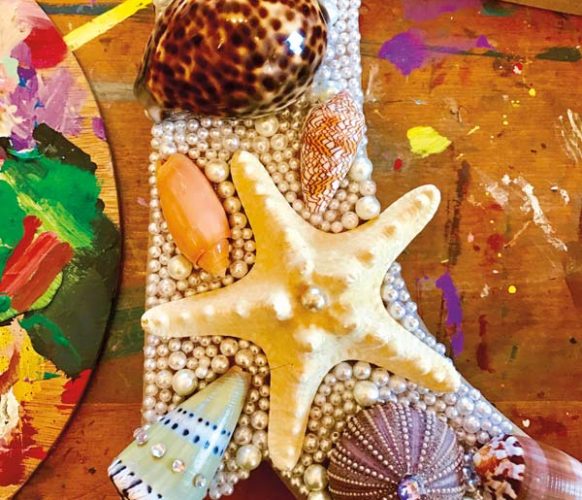 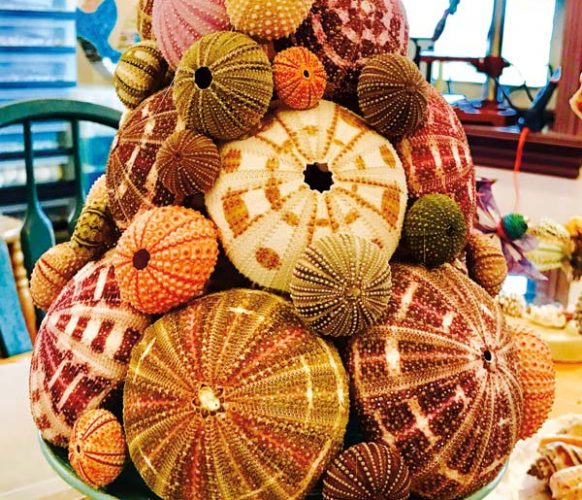 A project that Andrea is currently working on. A holiday tree she created using sea urchin shells. Photo by Sue Long.

Fortunately for Andrea, she has a supportive shelling partner. Her husband, Jim, who co-owns the Halloween attraction Field of Screams and operates Schopf Bros. Farms with his brother, Gene, has accompanied her on shelling trips that have literally taken them around the world. “If there’s a No. 1 place, it has to be Okinawa,” she says. “It’s amazing. The trip was a dream come true.” She also loves shelling on the Turks & Caicos. They’ve also been shelling on beaches along the East Coast, as well as in the Bahamas, Haiti, Costa Rica, Hawaii, Thailand, Cambodia, Vietnam, Laos, Phi Phi Islands, New Zealand and Australia. Last winter, she even managed to find some shells in Ireland.

In February 2016, Andrea and Jim joined another shell-loving couple – Andrea has gotten to know them  through a Facebook shelling group – for a tour of the Philippines. Shells are big business in this island nation, and the Schopfs’ friends, who are native Filipinos, knew which island was ground zero for shells, so the foursome headed there. “It was unbelievable,” Andrea says, adding that most of the shells and shell art that are sold in stores worldwide is sourced on this particular island. “Dealers come from all over the world to shop there.”

Her next dream destination is Bali.

As a grade school student at St. Anne’s, Andrea saw a film about Haiti. “From that point on, I always wanted to go there,” she says. Several years ago, that dream came true when one of Andrea’s childhood friends, Michelle Adams, shared she was going on a mission trip to Haiti. “I asked if I could go with her,” Andrea explains. Visiting the village of Montrouis made an impact on Andrea. She and Michelle became the founding members of Reality Church’s World Mission Team. “We’ve helped to build a school, a clinic and a pharmacy,” she reports of the work Hearts to Hands to Haiti has accomplished. Andrea also helped to build a house for the Haitian church’s pastor and his family.

Andrea is so committed to the project that she makes solo trips to Haiti every three months, staying at the home of the Haitian pastor for seven to 10 days. Her next visit is scheduled for April. Despite a language barrier (the Haitians speak a Creole-French dialect), and the fact that there’s no electricity or running water, “I’m comfortable being alone there,” she notes. Last summer, she took her 12-year-old daughter, Sydney, along for the first time and hopes the trip will become an annual mother-daughter event.

She’s also grown close to Juliana, a Haitian student who is financing her nursing school education with the colorful, paper-based jewelry she makes. Andrea always brings a stash home with her and sells it for her protégé (a selection is available at Geneva Bakery Cafe in East Petersburg). “It’s nice to help a fellow artist,” she says.

The Schopfs bought their farm – circa 1847 – just prior to their 2000 wedding. Since then, they’ve completely remodeled the farmhouse, built an addition and installed a pool and outdoor-living area. They were hands-on throughout the project, working with Don Dale on the design aspect and with Jake Brandt on construction. “We think outside the box,” Andrea explains. “Nothing stops our ideas. Fortunately, everyone we worked with was open to our ideas.” 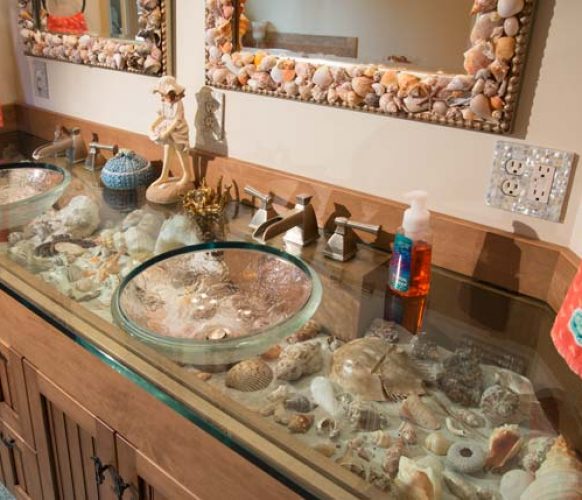 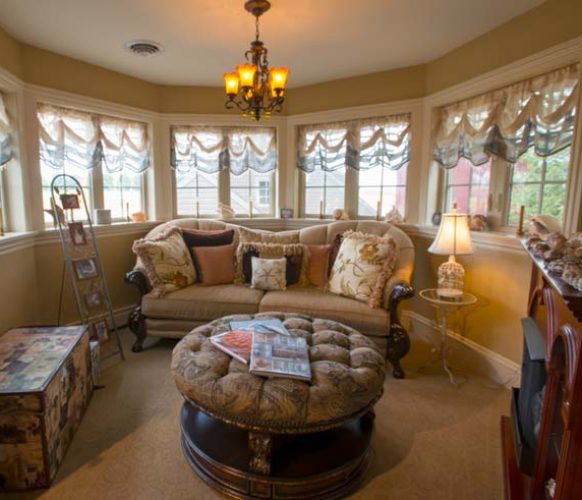 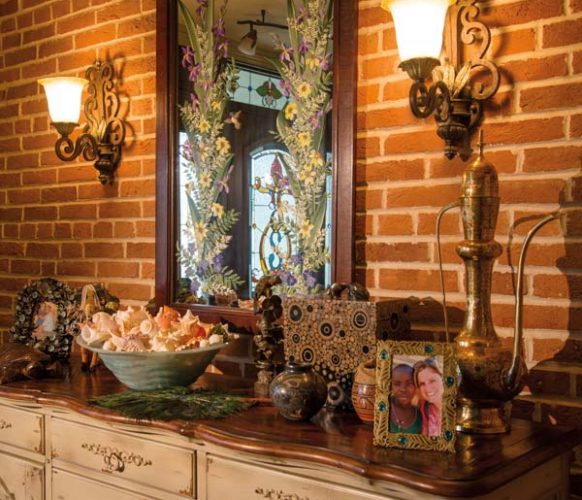 A bowl filled with shells serves as a reminder of the trips the Schopfs have taken. The framed photo is a memento of Andrea’s first trip to Haiti. 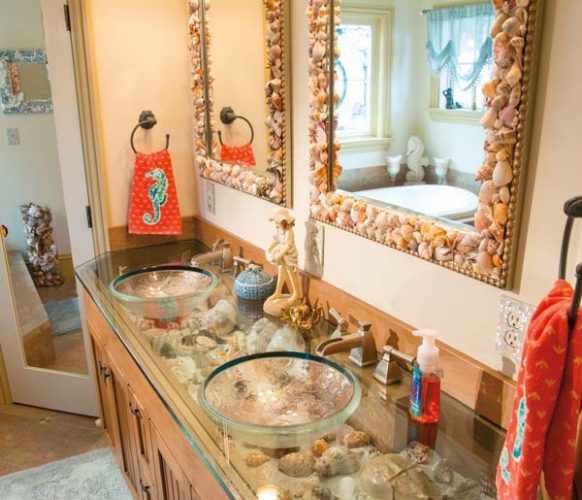 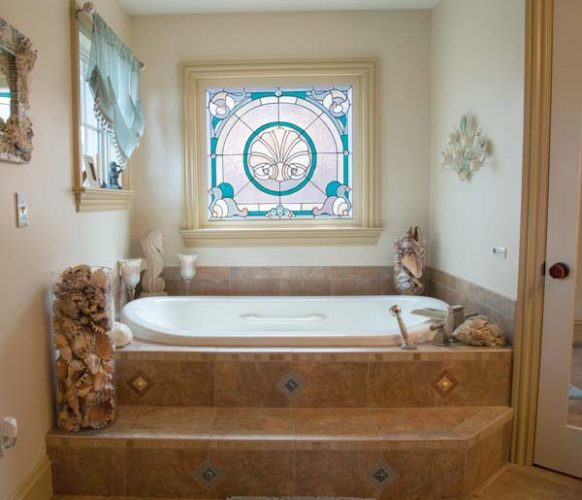 Andrea designed the stained glass window and worked with a glass artist to bring it to life. 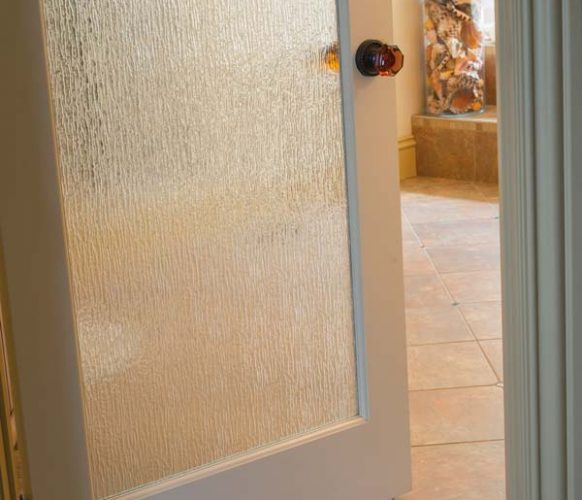 The glass door that provides access to the master bath mimics rain water. 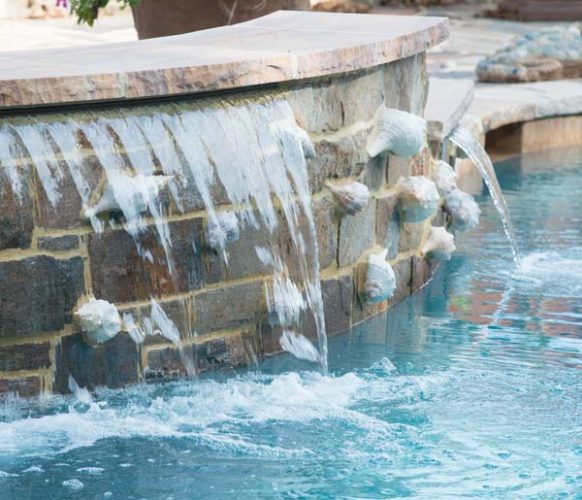 The outdoor-living area also has a shell theme. Masons from Vintage Stone devised a way to incorporate shells into the walls of the pool.

According to Andrea, the decor of the house “has meaning and holds memories.” While the master suite is awash in seashells, the foyer pays homage to farming, and the kitchen honors Andrea’s Italian heritage. Jim’s wrestling career as both an athlete and now a coach is commemorated in his basement man cave. 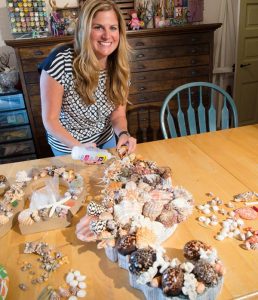 Andrea’s studio is located in the original portion of the farmhouse.

Jim designed the unique his-and-her vanity in the master bath. A portion of the vanity’s front flips down, making it possible to access the sand-and-shell-filled shelving that floats beneath the glass counter and vessel sinks. “It’s nice to be able to switch out the shells,” Andrea notes. Over the vanity are matching mirrors that Andrea designed and created. “The room was designed to fit those mirrors,” she says.

A shell-inspired, stained-glass window that Andrea designed dominates the wall over the tub. Shells from Haiti fill the glass cylinders that sit atop the steps that lead to the tub. A textured glass door that mimics rain water adds to the ambiance of the room, as does the sand-hued tile floor that’s warmed by radiant heat. Accessories – from door knobs to the towels – are beach related. The sitting area and bedroom also echo Andrea’s love of shells.

Walls throughout the house are hung with mirrors that Andrea has transformed into works of shell art. “There’s a lot more involved than simply gluing shells to a surface,” she explains. “You must first come up with a design and then find the shells that fit. It’s like creating a mosaic, only you’re using shells.” An in-home studio helps Andrea stay organized as shells are stored in drawers according to their shape, size and color. And, like most works of art, Andrea is always tweaking her creations. She’s still adding to and editing the bust that’s seen on the cover that’s embellished with shells she collected in Sanibel, Turks & Caicos and Costa Rica.
Outdoors, the pool area is embellished with shells that masons from Vintage Stone installed.

Best Shelling Beaches in the U.S.

If you love to collect shells, Coastal Living magazine suggests you put the following beaches on your must-visit list:

1. Sanibel Island, Florida. This island is actually made from shells! Friendly currents deposit shells onto a broad underwater shelf; the tides then carry them to the ocean’s edge.

3. Flag Ponds Nature Park, Lusby, Maryland. South of Annapolis on the Chesapeake Bay, the park is a mecca for fossils from nearby Calvert Cliffs.

4. Brandon, Oregon. While West Coast beaches are not heralded for their shells due to wave action, this one reveals treasures such as Japanese glass fishing floats, fossils, agate and jasper.

5. Galveston Island, Texas. Shelling is at its best when storms come out of the north and push the water away from the beach.

6. Okracoke Island, North Carolina. The egg-shaped Scotch Bonnet is often found here. Who knows? You might find Blackbeard’s treasure, too.

10. Portsmouth Island, North Carolina. This segment of Cape Lookout National Seashore is becoming a sheller’s paradise. Accessible only by ferry or boat. 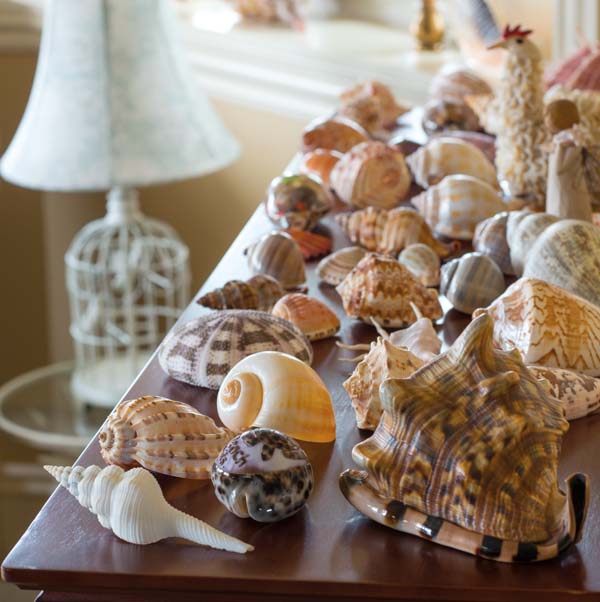 Shells decorate a tabletop and the window sills in the sitting room portion of the master suite.