As Lori Sturgess demonstrates, celebrating the holidays can be done beautifully and creatively. 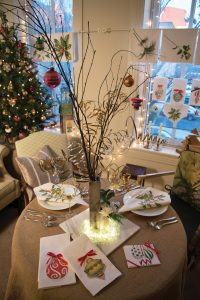 You might call Lori fearless when it comes to art. After graduating from McCaskey, she enrolled in the textile-design program at the University of Georgia. She eventually settled in Savannah, where she taught at the Savannah College of Art & Design and, due to her love of music, became involved with the Savannah Symphony. “I got my feet wet with the symphony,” she says of her penchant for becoming involved in fundraising efforts for nonprofit organizations. “Meetings were as old-school as it gets,” she says of the white-gloved ladies who gathered in dining rooms to conduct business.

Her next stop was Marietta, Georgia, where she launched her first company, Lori Betts, Ltd. The company “materialized” when a friend, who was aware of Lori’s artistic talents, invited her to travel with her to Lookout Mountain, Tennessee, where she was introduced to a woman who was in need of some design help. Specifically, she was searching for someone to customize small lampshades for her dining-room chandelier. “She had brought back some wonderful trims and other things from France,” Lori explains. 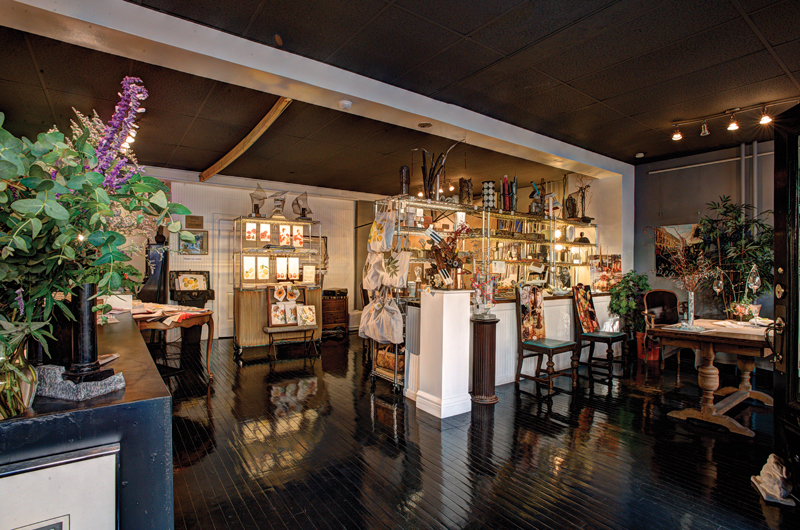 Lori was game to take on the assignment and hand-painted and embellished the shades. “I thought to myself, ‘I can do this,’” she says of the realization that she could launch a niche business. She shakes her head at the memory of skipping over formulating a business plan and other start-up steps and simply setting up shop. “I always seem to do things backwards!” she admits.

The venture soon translated into hand-painted linens that exhibit such motifs as florals, fruit, botanicals and holiday ornaments. She does remember visiting a friend in Florida, who invited her friends to her home to view Lori’s handiwork and offer honest assessments of her product. “They bought everything I had!” she says. 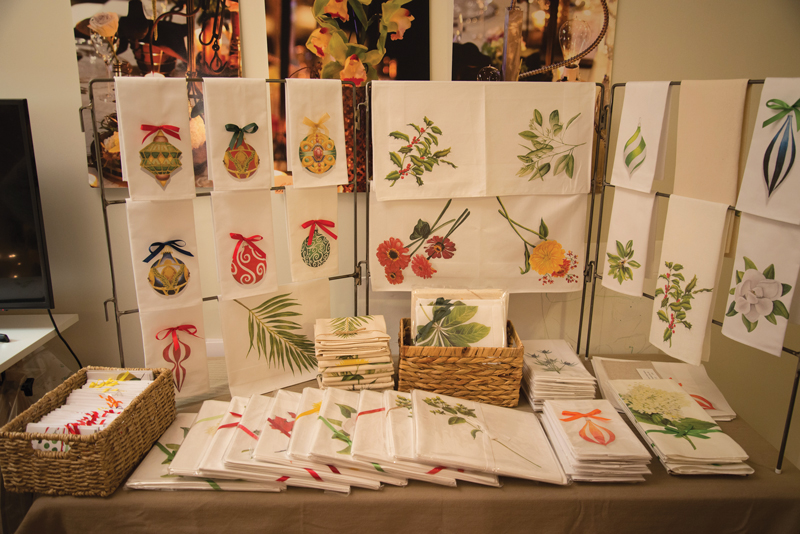 She then found a showroom at Marietta’s Design Center that was willing to represent her. “Suddenly, I had a $15,000 order to fulfill,” she recalls. At one point, she had nearly 2,000 wholesale clients on her spreadsheet. Success prompted her to hire seven artists and invest in a machine that could transfer her original designs onto the fabric. 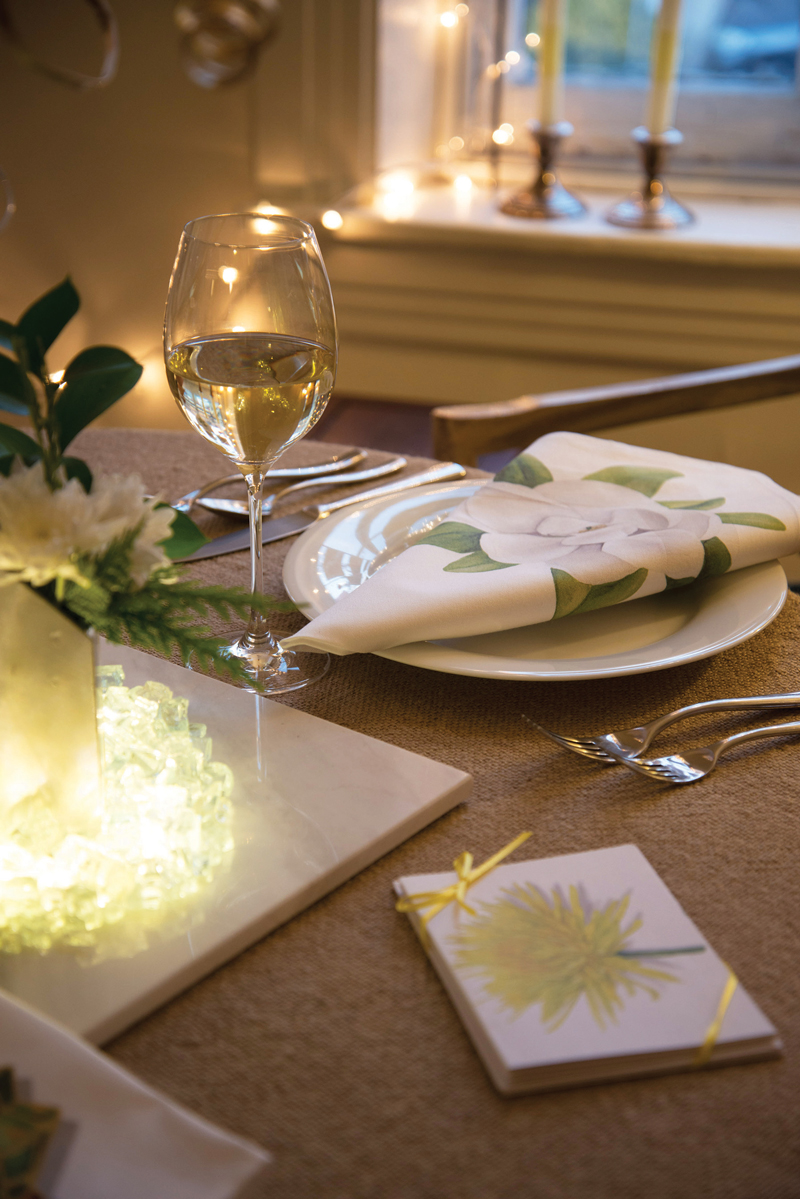 After a dozen years, she walked away from the venture and pursued other opportunities. For a time, she marketed dried-flower arrangements for a Dutch company. She worked for Le Cordon Bleu in Atlanta. She oversaw the marketing for a designer show house.

She also became infatuated with sculpture that entailed “harvesting” anything that no longer served a purpose and giving it new life as art. The new venture, Recentered Pieces, led Lori and her collaborators to create sculptures for corporate and private clients, urban areas, sculpture gardens and even a dog park. Small sculptures proved to be popular as centerpieces for corporate and benefit dinners. Repurposing even made a leap to her paintings, which exhibit unexpected elements that bring a three-dimensional perspective to the finished product. 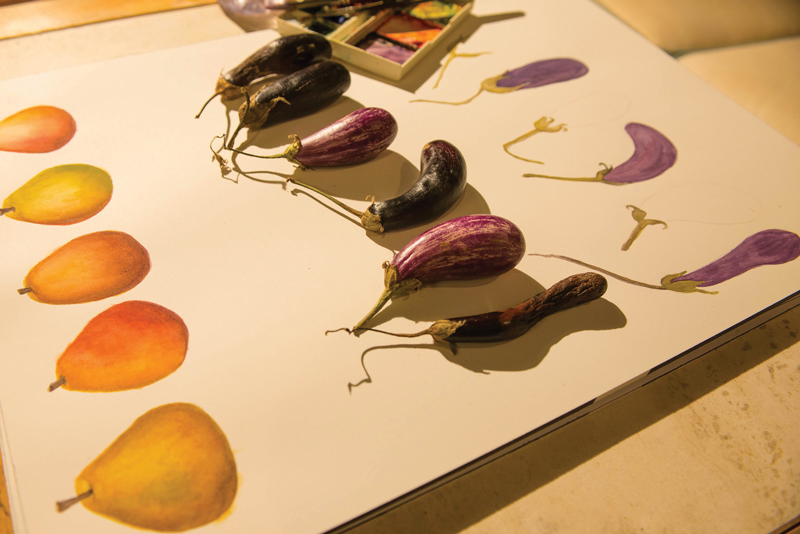 Two-and-a-half years ago, Lori returned to Lancaster, where she aimed to continue Recentered Pieces. She was inspired to relaunch Lori Betts, Ltd., when a woman from Washington, D.C. tracked her down in the hopes of buying more linens. “She purchased my linens in Bermuda 15 years ago,” Lori explains. “Considering all the moves I’ve made, she had to work hard to find me.”

Working out of her apartment above Gallery Row, Lori began creating her trademark linens. Occasional shows introduced her to potential clients. Tabletop sculptures, which can be rented, have graced such events as the Lancaster Chamber’s Annual Dinner. 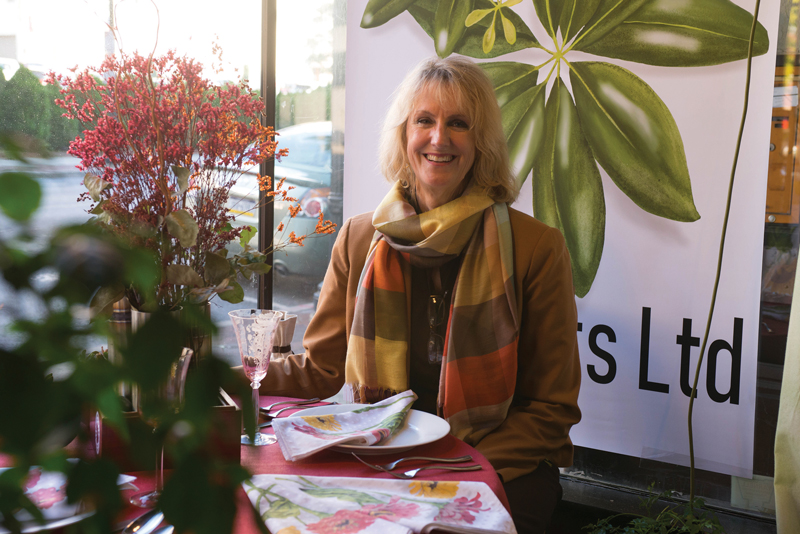 Earlier this year, Lori made the leap and opened a gallery – The Studio – on the first block of North Prince Street. She has added canvas bags and notecards to Lori Betts, Ltd.’s lineup. She is also hosting workshops for budding artists who are welcome to dig through the gallery’s buckets and baskets of harvested elements and create everything from sculptures to memory boxes. She’s also tinkering with the idea of hosting FAM trips for out-of-town designers and event planners in an effort to show what Lancaster has to offer in their fields of interest.

“It’s been a crazy, fun and flattering ride, and I can’t wait to see what’s next,” she says about her roller coaster of a career.

The Studio is located at 52 North Prince Street. Call 717-394-2072 or visit recenteredpieces.com for hours/information.