The Heart of Lancaster Arts and Craft Show, which is held at Root’s Country Market over Labor Day weekend, is celebrating its 30th anniversary. The show’s founder, Marilyn Hobday, reflects on those 30 years.

In the world of arts and crafts, late summer signals the start of the holiday season. For those who decorate their homes for the various seasons and holidays, shows such as Heart of Lancaster provide a treasure trove of unique items. “And, people shop the show for Christmas gifts,” Marilyn says of the one-of-a-kind jewelry and fashion items they can find for the people on their gift lists. She excitedly notes that the fashion aspect of the show will grow this year with the addition of new vendors whose focus is clothing, jewelry and leather.

Artistic expression and handcrafted items are as old as mankind. For centuries, people have been selling things they have made by hand. Fast forward to the 19th century, when the Industrial Age threatened that tradition and gave rise to the Arts and Crafts Movement. Launched in England during the 1880s, what came to be regarded as an anti-industrial movement spread across Europe and to North America over the next 30 years. The celebration of traditional craftsmanship influenced architecture, decorative arts, fine art and furnishings.

Another arts and crafts movement took root in the 1940s, when how-to books became the darlings of the publishing industry. According to Barbara Brabec, who writes about the industry, the books generated a demand for craft supplies. Ultimately, a craft-supply industry emerged on the West Coast and moved east. Magazines devoted to craft projects debuted in the early ‘60s, which further fueled crafting fever.

America’s Bicentennial in 1776 reinvigorated traditional crafts, as people developed interests in such hobbies as quilting, felting, hooked rugs, needlework, woodworking, etc. According to a Harris Poll conducted in the mid-70s, two out of three respondents named crafting as a hobby.

The advent of the Internet took arts and crafts to a new level, as artisans were now able to create a worldwide audience through websites. That reach has only expanded with the dawn of social media.

Today’s artisans – or “makers” in 21st-century lingo – have evolved into creative entrepreneurs who possess the talent to make irresistible things. While the creative factor has grown more sophisticated, and Etsy.com is considered a must-view source for millennials, like all segments of the economy, the Great Recession affected the arts and crafts industry. Attendance dipped, and shows that were already teetering disbanded.

The good news is that the industry appears to be back on track. “Our numbers are up,” says Marilyn of the rebound in attendance. With it, a new generation of artists and buyers is being seen at shows. Also, people are traveling again and in most instances, they are searching for souvenirs that provide an emotional attachment to their vacation. Nothing stirs memories better than handmade items.

The industry itself is also making changes. The new trend in shows might best be described as cross-pollination. Farmers markets are finding that makers add an artistic element to their venues, while arts and crafts shows are welcoming artisans who specialize in food and wine, which add a new dimension to theirs. Conceptualized in the West, the trend is now making an impact on shows in the East. And, according to Brabec, it appeals to that all-important demographic, the millennials.

Such a scenario is working in the new must-visit town in America: Waco, Texas, where Chip and Joanna Gaines of HGTV’s Fixer Upper fame have turned a complex of silos into a shopping extravaganza that features food, locally made decorative items and their own Magnolia brand products.

It seems that Marilyn was ahead of her time when she proposed the Heart of Lancaster to some of her artist friends. In her estimation, Lancaster’s arts and craftspeople needed a vehicle in their own backyard to showcase their talents. She recruited Jennie Todd, Linda Hikes, Diane Hawthorne and Tillie Schouten to serve on her planning committee. They began searching for an outdoor venue that provided plenty of parking. “The only place that fit that bill was Root’s Country Market,” Marilyn explains.

So, Marilyn approached owner Edith Longenecker with her idea. Edith was skeptical, explaining Root’s had never rented their facility to an outside organization. “She told me she’d have to think about it,” Marilyn recalls. A few days later, Edith summoned Marilyn and told her the family would be willing to give the venture a try.

Marilyn and her committee invited 83 vendors to participate. “We thought it was just great,” she says of their willingness to be guinea pigs. The show received a PR shot in the arm when WGAL’s Wendall Woodbury previewed it for one of his “Wendall’s World” segments. “He interviewed me while I painted,” Marilyn explains. “I was so grateful to Wendall; that was huge for us.” Things went so smoothly for the inaugural one-day show that at the end of the day, the vendors gave the organizers a standing ovation. “That’s unheard of,” Marilyn says.

Soon, vendors who heard about the successful show came calling. “We needed to expand,” Marilyn says. “We were turning away too many vendors.” She approached Tom Longenecker, who had taken over Root’s, with the request, and he agreed to provide space for additional vendors. She had to make the same request a second time, which brought the number of vendors to 170. She approached him a third time and secured space for the present-day total of 200 vendors. “Of course, then we needed more parking!” Marilyn reports.

Demand – both from the public and the vendors – prompted Marilyn to approach Tom with yet another request: expand the show to two days. “That was seven years ago,” she says. “Fortunately, Tom agreed to that, too.”

On With the Show

Planning the show is a nearly year-round endeavor. For 10 months out of the year, the show’s planning committee meets every Tuesday night. Vendor requests are never-ending. As a result, the committee has grown to six members and in addition to Marilyn, it includes Melissa Ward Carroll (a graphic artist), Jessica Keener (a jeweler), Christine Ott (who paints on glass), Susan Quinn (a tole artist) and Bunny Switzenberg (beeswax creations). “Everyone is talented and knowledgeable, and two of us are former teachers,” Marilyn notes.

The juried show entails “getting a good handle” on potential vendors through interviewing them via phone calls or having them submit the making process in writing. References for potential vendors are also contacted. Referrals are followed up via phone calls. “When it comes to selecting the vendors, well, a meeting can go into the wee hours,” Marilyn says of the month-long selection process. “Our goal is to provide the show with diverse artists and craftspeople and a range of price points. Although we have exhibitors from Maine to Florida, local artists are at the core of the show.”

During the show, committee members also anonymously visit booths to make certain the vendor’s products are indeed handmade and that they are interacting with the public. Manufactured products that have been artistically altered by a vendor is reason for expulsion from the show.

Due to a number of reasons, 40-50 vendors are rotated in and out each year. “We need to keep the show fresh,” Marilyn remarks. On the flip side, several vendors have been with the show for each of its 30 years.
“Secret shoppers” from art-and-craft-related organizations also visit booths in an effort to compile the all-important rankings of shows. Marilyn is proud to report that one of those organizations, Sunshine Artists, ranks Heart of Lancaster in its Top 20.

In addition to showcasing local talent, Marilyn explains that education is a critical element of the show. “We offer 50 live demonstrations during the show,” she explains. “We want to educate the public about how things are made.” She is confident that the educational aspect of the show helps to encourage future generations of artists and shoppers to become engaged.

Music and food also help to make the show a fun family destination for the last holiday weekend of the summer. This year, the jazz ensemble Over Easy (Saturday) and the Susquehanna Pipes & Drums (Sunday) will be providing musical entertainment. As for food, Root’s handles that aspect of the show and relies on many of its vendors to provide a wide selection of breakfast, lunch and snack items.

Proceeds (and donations from show patrons) also benefit a local nonprofit organization. In the past, organizations such as the S. June Smith Center, Columbia Food Bank and Make-a-Wish were beneficiaries. (This year’s organization is TBA.)

The “Heart” of the Show

Marilyn can’t believe this year marks the 30th anniversary of the show. “I was in my 30s when this began,” she says. “Now I’m a grandmother of six!”

After graduating from Millersville University, she became an art teacher at Hempfield High School, retiring in 1999. All the while she taught, Marilyn was a working artist. “I used to do 35 shows a year,” she explains. “Now, I’ve downsized to six,” naming Lititz; Boalsburg; Frederick, Maryland; and, of course, Root’s as being among her destinations. Marilyn says she maintained a non-stop schedule for one reason: to put her children through college. Son Todd, who is an accomplished furniture maker, attended college in Boston, while her daughter, Melissa, is a veterinarian in the Philadelphia area.

Marilyn also purchased a piece of Columbia history – the Poplar Street School, built in 1884 – to serve as her studio. “I fell in love with it,” she says. “The architectural aspects of buildings in Columbia are amazing!”
When she showed the building to the other love of her life, Denny Pierce (they were married on the only weekend she had available – Halloween), he could not believe she was serious about buying it. “I think he said, ‘Are you out of your mind?’” she shares, remembering that he pointed to the 57 windows that needed serious attention.

“If I didn’t buy it, it was probably headed for the wrecking ball,” she theorizes. Today, the Poplar Street School for the Arts serves as Marilyn’s studio and Todd’s workshop.

Like other successful artists, Marilyn has learned that it’s necessary to balance creativity with business. “You really need to know what customers want,” she explains. Like fashion, styles change. Forty years ago, the country look ruled. “Today, it’s more eclectic, although primitive is still very popular,” Marilyn reports. And, she maintains that it’s important to offer a wide range of price points, which in her case involves offering both originals and prints. “You never know when the person who purchased something for $10 will be back to buy something more substantial. That’s also where education comes into play: I spend a lot of time educating visitors about art. Like I always tell our vendors, you never know who’s going to walk into your booth and what they’re going to buy. I always stress that you can’t tell a book by its cover.”

The Heart of Lancaster Arts and Craft Show will be held September 2 & 3 at Root’s Country Market, 705 Greystone Road, Manheim. Hours each day are 10 a.m.-4 p.m. Visit hlcshow.com for details. 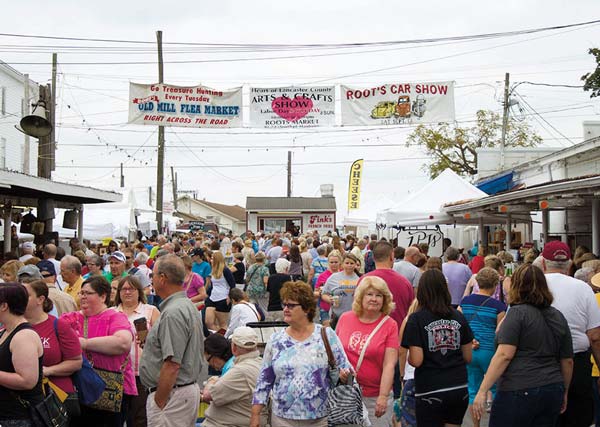