While we continue to spend most of our time at home, the Lancaster Habitat ReStore, which is an arm of Lancaster Lebanon Habitat for Humanity, has been flourishing and transforming thanks to a steady stream of donations flowing in and out, as Lancaster residents have more time to purge unwanted possessions, as well as redecorate and remodel. The home improvement store offers everything from antique furniture and lighting fixtures to tile and building materials. You never know what you’ll find when stepping foot inside the ReStore! 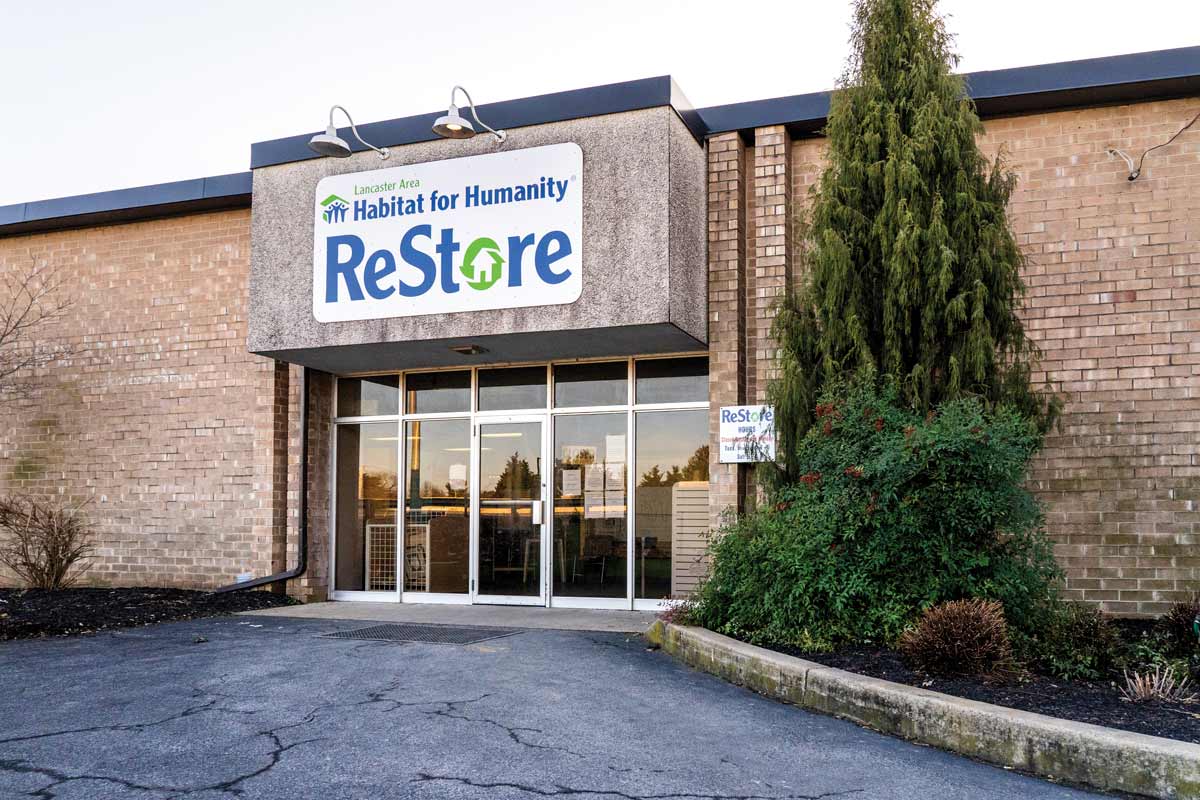 “It’s fun to see what comes through the doors,” ReStore manager Ben Mathus says while reflecting on some of the most notable donations he’s seen over the years, including a boxing ring, a troop of naked mannequins and original artwork from well-known artists.

In a time of economic trepidation, the ReStore provides affordable furniture and renovation materials for families across the county. Those who are looking for new projects to keep busy often look at the ReStore’s expanse of furniture and building materials – much of which is donated by local builders who have excess supplies in their warehouses or at the end of projects – as a canvas full of opportunity for DIY and upcycling experiments. “People enjoy breathing new life into old things,” Ben remarks. He’s seen customers transform kitchen cabinets into play kitchen sets for children, TV armoires into sewing tables or dry bars, mannequins into planters and milk jugs into end tables. The possibilities are endless. 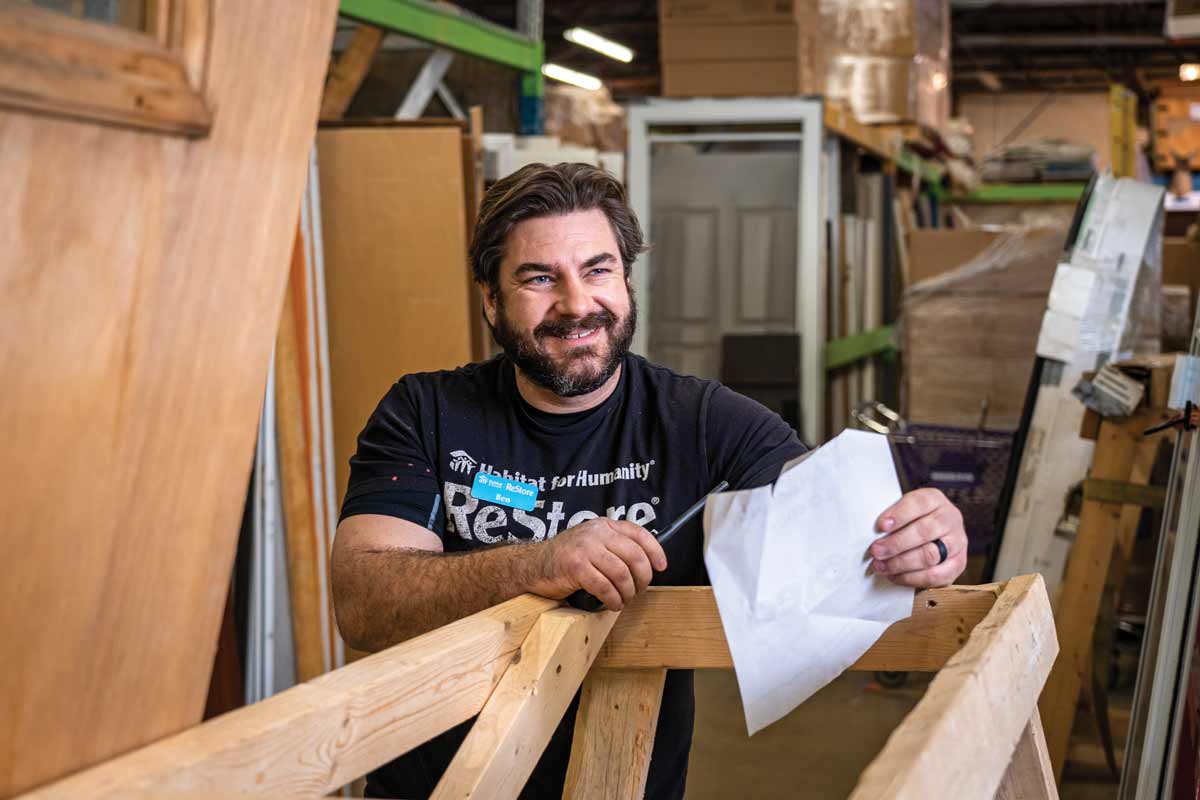 ReStore manager Ben Mathus says it is rewarding to see the families in the program find their way out of poor living conditions and into homeownership.

Looking at the bigger picture, the ReStore serves as much more than an affordable hub for secondhand items. Every purchase and donation made at the ReStore directly helps to house a local family through Lancaster Lebanon Habitat for Humanity. For Ben, the best part of working at the ReStore is watching and interacting with families as they go through Habitat’s homeownership program. “It’s rewarding to see these families find their way out of poor living conditions and into homeownership,” Ben says. “They are why we are here.”

Also important is the fact that the ReStore is good for the environment. Last year, the ReStore saved 600,000 pounds of waste from going to landfills.

Housing as a Human Right

Habitat for Humanity believes that shelter is a basic human right. This belief came to the forefront of our society last year when we were urged to stay at home as a matter of public health and safety. While many of us worked from home in pajamas and enjoyed the safety and comfort of our environs, others weren’t so lucky and were forced to shelter in place in unsafe, unaffordable or overcrowded conditions.

Lancaster Lebanon Habitat for Humanity strives to make decent housing accessible for local families through their homeownership program. Applicants for the program must fall within a specific income bracket, have reasonable credit, a manageable level of debt and the willingness to spend up to 400 hours of sweat-equity to build their home. 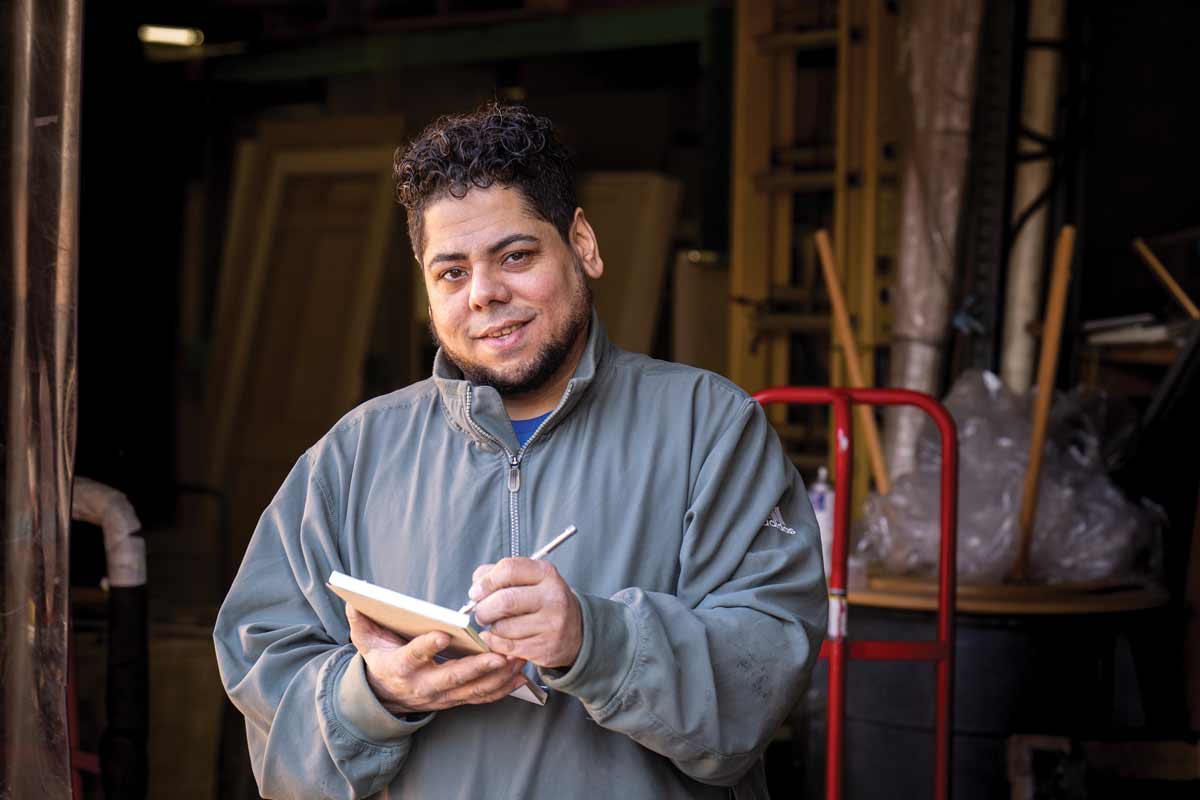 Manny Cruz and his wife, Awilda, are one of 14 families currently in Lancaster Lebanon Habitat for Humanity’s homeownership program. Even though he has surpassed his required volunteer hours at the ReStore, Manny continues to volunteer there whenever he can.

Applicants must also meet certain housing criteria. They must be experiencing inaccessible, overcrowded or substandard living conditions, spending over 30% of their gross income on housing expenses, living in an unsafe community or living in public or Section 8 housing.

Once accepted into the program, homebuyers contribute hundreds of sweat-equity hours, in which they volunteer mainly at their own or a fellow homebuyer’s house or at the ReStore. By working on build sites, homebuyers learn valuable skills and information about their homes to better prepare them for life as homeowners. To further strengthen self-sufficiency, homebuyers are also required to take classes relating to subjects like plumbing and financial literacy. 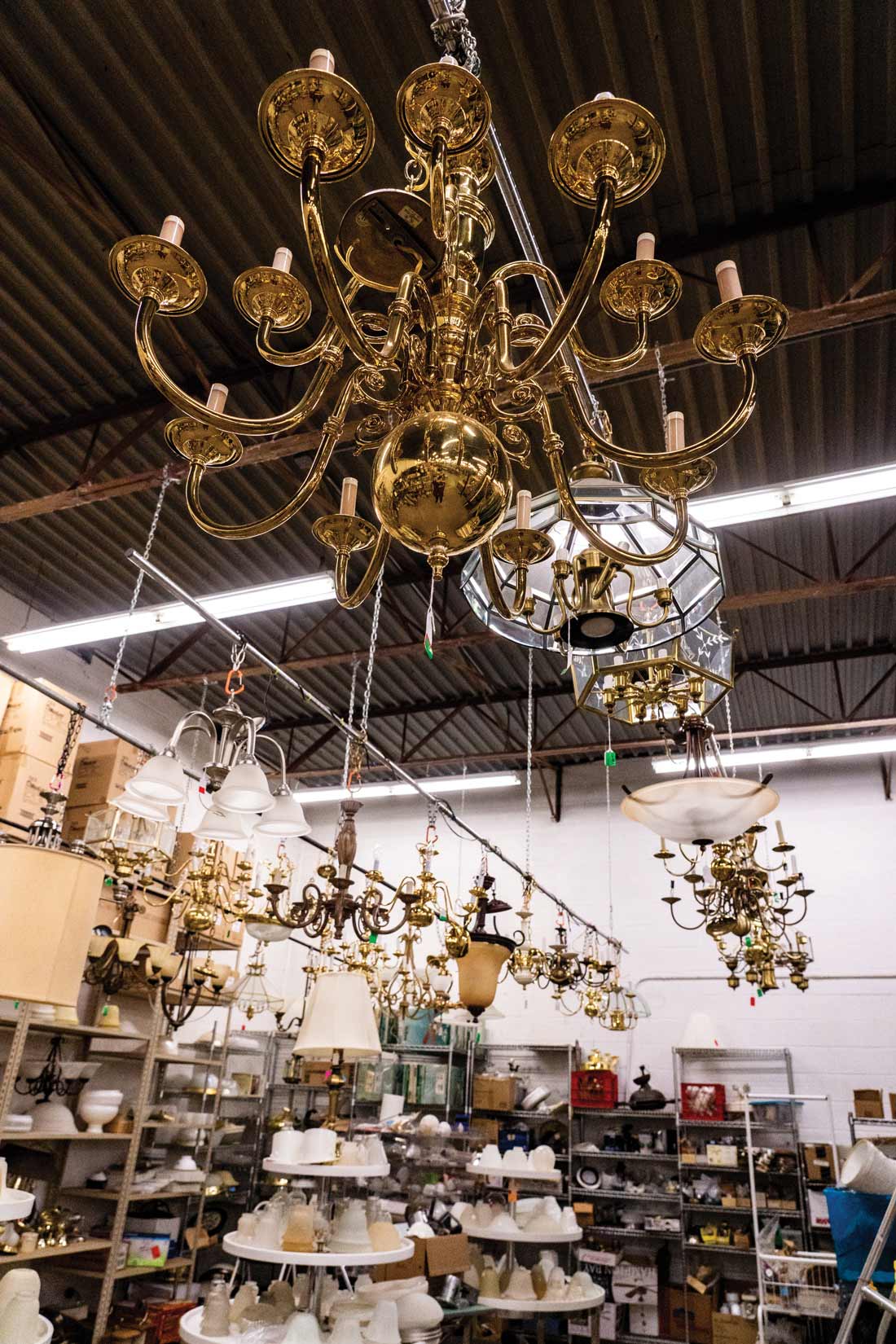 An array of chandeliers hangs above the lighting section.

After all sweat-equity hours are completed and construction on the home is finished, Habitat for Humanity – which acts as both the builder and the lender – sells the home to the family with affordable monthly mortgage payments that are molded to each buyer’s budget.

The Journey to Homeownership

Manny Cruz and his wife, Awilda, are one of 14 local families currently in Lancaster Lebanon Habitat for Humanity’s homeownership program. Originally from New York City, Manny made the move to Lancaster County four years ago, following his mother and siblings to the area. “The city was just getting way too expensive,” Manny laments, adding that he still struggles with adapting to the quiet and calmness of Lancaster County in comparison to New York City.

Manny works full-time as a brazer at Lift-All in Landisville, which manufactures slings for overhead lifting, pulling and load securement on construction or industrial sites. Outside of work, Manny can be found volunteering at the ReStore, spending time with his family and working on his car. One day, he hopes to turn his enjoyment for working on cars into a profession. “That’s always something I’ve wanted to do,” he shares. 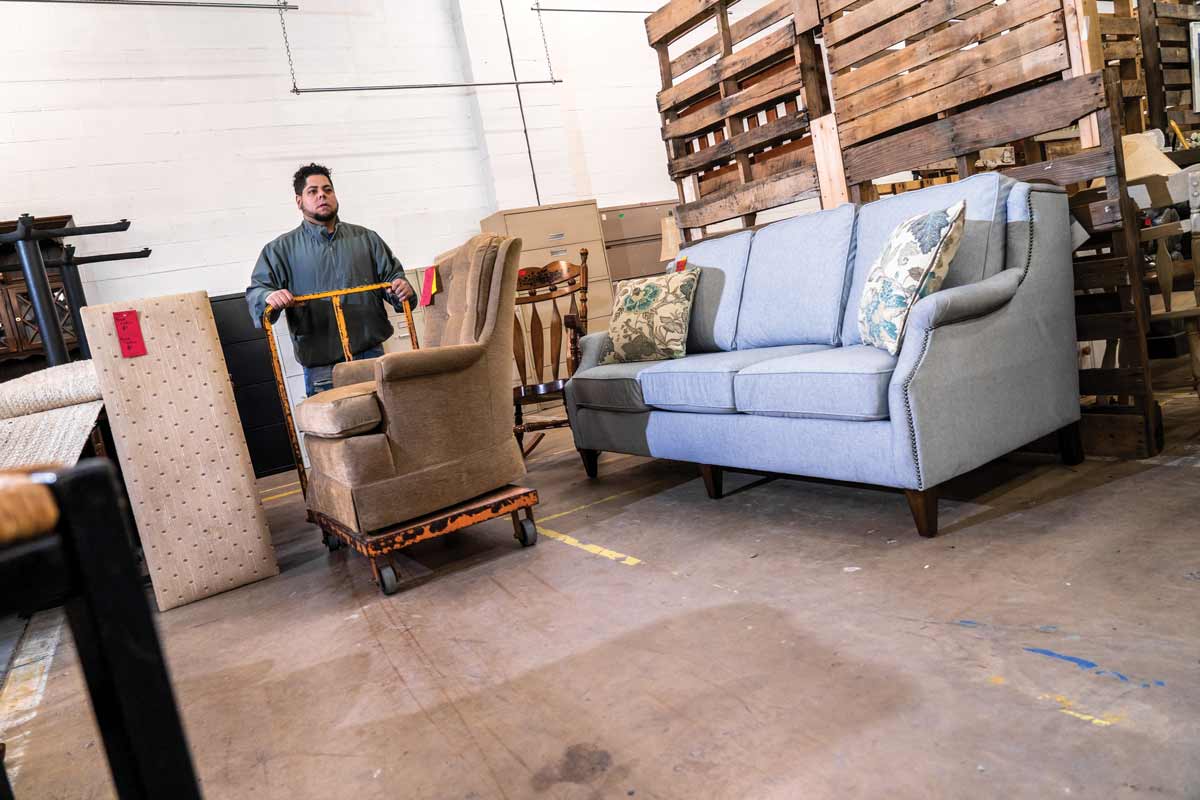 While volunteering at the ReStore, Manny oversees the donation dock and helps customers load heavy items into their cars.

Manny’s journey to homeownership through Habitat for Humanity began in January 2019 when, after encouragement from a since-passed close friend, he applied and was accepted into the program. In January 2020, Manny finished his preliminary volunteer hours, and by the following August, he was matched with his future home on Howard Avenue in southeast Lancaster city.

“Homeownership means a lot,” he emphasizes. Manny and Awilda have only been living by themselves for a few months, previously living with family. “We were living eight or nine people in the house and all fighting over one bathroom,” Manny remembers. Manny and Awilda, who each have early-teenage daughters, are excited to be able to offer the girls their own rooms when they come to visit. 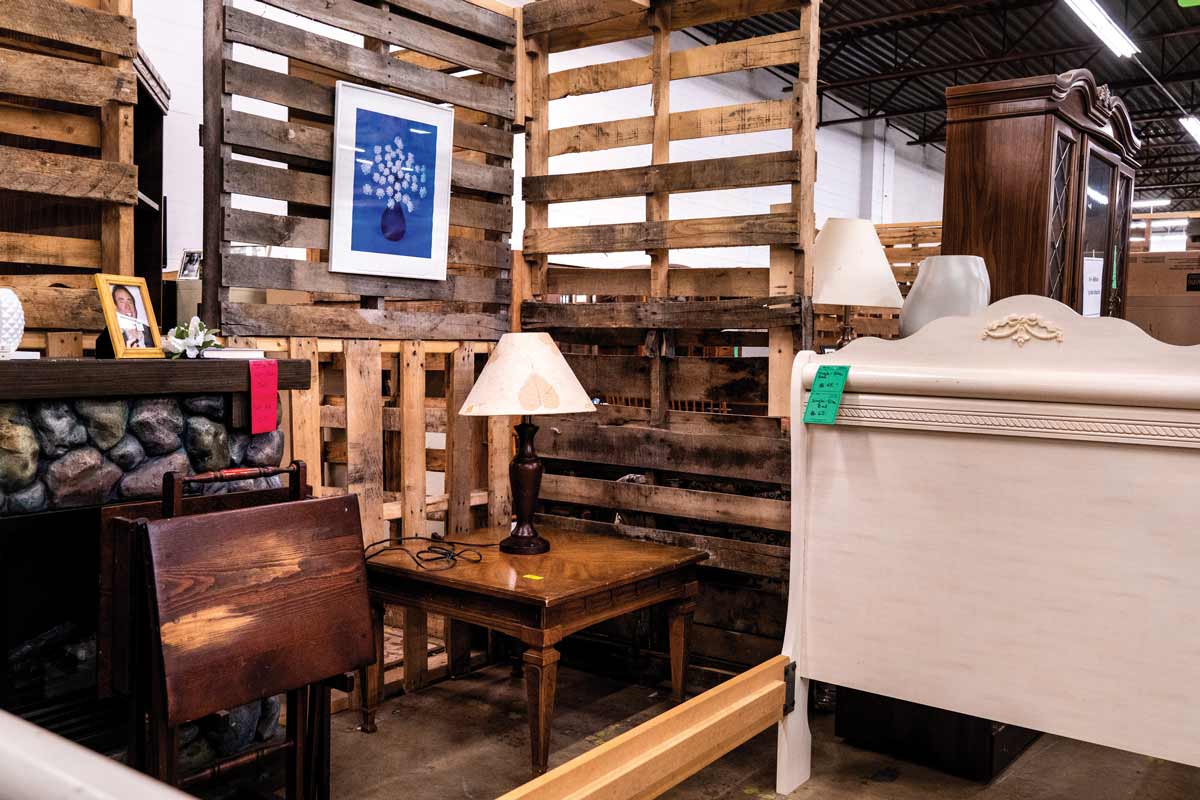 In a time of economic uncertainty, many people rely on the ReStore for affordable furniture.

Homebuyers can complete their sweat-equity hours through multiple avenues, such as construction, the ReStore, homeownership classes or volunteering at Habitat for Humanity events. In the two years that Manny has been in the program, he has already accumulated 500 volunteer hours at the ReStore and continues to volunteer there after work and on weekends (when he isn’t working on his own home). “It’s better to give than just sit at home,” Manny explains. At the ReStore, Manny oversees the donation dock where people drop off their unwanted items and helps customers load heavy purchases into their cars.

Manny and Awilda’s future home is currently under demolition and renovation, so Manny expects to knock out his required construction hours quickly. By helping with construction, Manny will learn a lot about his house, which will come in handy in the future when something needs to be repaired or replaced. Habitat’s homes usually take about nine months in total to complete. Unfortunately, COVID-19 has slowed down the process, causing delays in permits and volunteer limits on build sites, but Manny remains hopeful that his house will be completed on time.

A Staff of Many Talents

In addition to homebuyers completing their required hours, the ReStore sees a wide variety of volunteers including college students, corporate groups and the dedicated regulars who believe in Habitat’s mission. “It’s a great place to volunteer. Everyone is awesome to work with,” Manny emphasizes.

The ReStore’s social media gives followers a glimpse into the fun, close-knit environment that the staff creates. Photos of actor Nicolas Cage scatter the store (as does a masked cardboard cutout of the actor that greets customers as they enter). 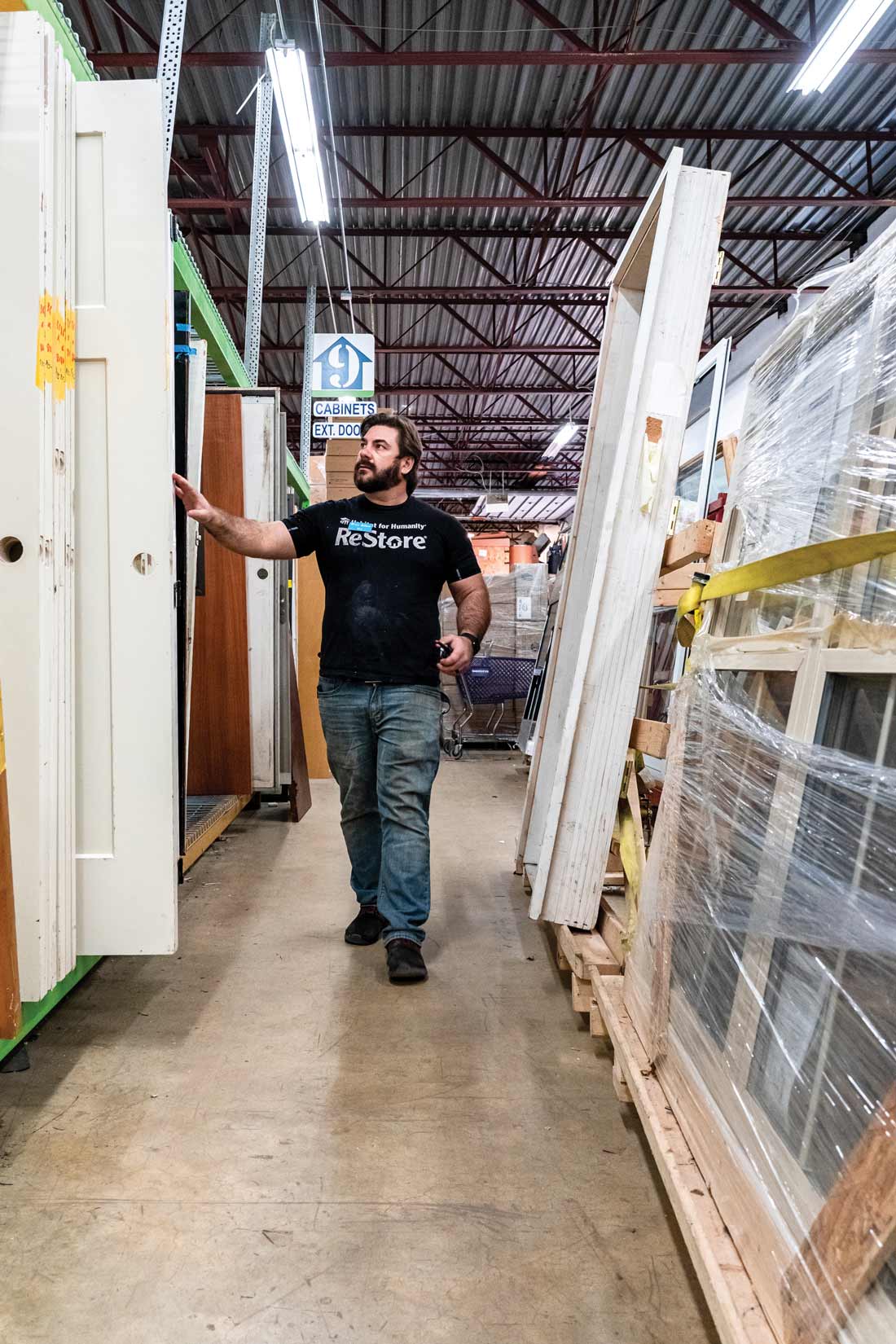 As the ReStore manager, Ben is “in charge of the circus.” From bookkeeping to pricing to laying out the store, he does it all.

Local musician and performer Ian Sanchez-Herasme doubles as the ReStore’s customer service specialist and posts frequent live tours of the store’s current offerings on Facebook. One night, while Ian sipped on wine and messed around on his piano, the ReStore Theme Song was born. The catchy tune, which can be streamed from all major music platforms, invites customers to the store and illustrates the store’s purpose: “Come to the ReStore, your purchases they mean more…helps empower families in need. Your local community will thrive just wait and see.”

Ben, who has a background in cinematography and has worked on movies like The Fault in Our Stars and television shows like Gossip Girl, filmed a music video for the jingle. The video, which follows Ian and other staff members around the ReStore, can be found on YouTube.

Land acquisition is a constant process for Lancaster Lebanon Habitat for Humanity. They have built on land donated by local churches or private entities, as well as constructed homes on properties where condemned houses once stood. Currently, the organization owns two properties in Lancaster and three on Cumberland Avenue in downtown Lebanon, which were severely damaged in 2017 during the city’s worst fire in 30 years.

The Lancaster Habitat ReStore is currently located at 155 Independence Court, Lancaster. In the coming months, the ReStore may be relocating. Keep an eye on the store’s Facebook page or website to learn of any new developments. Current hours are Tuesday through Friday, 9 a.m.-4 p.m., and Saturday, 9 a.m.-3 p.m. For more information, visit lancasterlebanonhabitat.org or their Facebook or Instagram.

ReStore manager Ben Mathus says it is rewarding to see the families in the program find their way out of poor living conditions and into homeownership.