My family is a bit unusual for Greek-Americans in that my mother’s family came to America in the late 1800s. On my mother’s side, we have moved back and forth between Philadelphia and Lancaster for four generations, starting with my grandmother and now with my youngest son. My father, who emigrated from Greece as an 18-year-old in 1924, did not have a formal education, but he was very well-read and enjoyed discussions on politics and history. My mother was born in Lancaster; initially she was a stay-at-home mom, but later became involved in different family businesses. Both my parents were committed to family. I was the oldest of three children (I have a sister and a brother). I lived in West Philadelphia and attended Bartram High School before we moved to Havertown. After graduating, I worked in center-city Philadelphia as a legal secretary in a law firm.

I have been married to my husband, Tom, for 53 years. We have two sons. Jim, our oldest, was named for his grandfather, Jimmie, who started the Stockyard Inn in 1952. From the time he was a little boy, Jim knew he wanted to be involved in the restaurant and carry on the tradition of his grandfather and his father. Our second son, Dean, pursued a different direction. His expertise is franchise law. Like his father, he attended F&M and then Cornell Law School, where he met his wife Christina, who is an estate planning attorney. We have been blessed with three beautiful grandchildren.

How I Met My Husband

I first met Tom when I was 6 years old. I was a flower girl in a wedding and Tom, who was 12, was a junior usher. We met again at a dance when I was 16. I thought he was very nice but too old. Three years later, our paths crossed again when his family attended a Name Day party my grandparents hosted. To this day, I’m not sure if it was a planned re-introduction arranged between my grandmother and (future) mother-in-law. Our families knew each other and were friends, so it was probably “meant to be” after meeting for a third time.

Many people ask me how I can work with Tom, and the reply is easy – my husband is my best friend; we have the same commitment and passion for our restaurant as we have for each other. And if we ever have disagreements, we just go into the walk-in refrigerator and cool off!

First Job in the Restaurant Industry

My first restaurant job was coming to work at the Stockyard Inn. Tom was a big influence, and he felt it was important that I was involved in the family business. I started out in the office and learned the daily routine through working on the books and doing payroll. I later learned other aspects of the business. As time went by, I spread my wings and began greeting guests at the door. I also began to manage the hospitality part of the business, which was my father-in-law’s role before he retired. I am so blessed! What a great opportunity it has been to make so many wonderful friends and to greet so many new guests over the years. It’s so very special to see multiple generations of the same families coming through our doors and reminiscing with them.

The Secret Behind the Stockyard’s Longevity

In my opinion, the biggest reason for our success is the family commitment and pride that began 64 years ago with my father-in-law’s high standards and passion for the business. It has been a joy to see the Stockyard Inn passed down from Jimmie to Tom and I, and now to Jim, the next generation. We are involved each step of the way in creating a wonderful dining experience. Jim heads the kitchen, Tom still loves to cook, and I am at the front door greeting our guests.

Another contributing factor is that we strive to keep up with today’s dining trends. We feature creative specials and drinks, and an award-winning wine list. Our beef is USDA prime. Our Bar menu is designed to attract guests who want to enjoy smaller portions of quality food in a relaxed atmosphere. We pride ourselves in providing the best in fine dining as well as casual dining. Our goal every day is to be a little bit better than the day before.

Magazines include Plate, Restaurant Business, Food & Wine and Wine Spectator. I also like to visit the websites of steakhouses that are located in larger cities.

Specialty of My House

My go-to dish for company is Seafood Mediterranean – lobster, scallops, shrimp and calamari in a fresh herb-and-olive-oil marinade, topped with cherry tomatoes and feta cheese. It gets baked and served over orzo.

Extra virgin olive oil. I use it every day.

If I Could Invite 4 People to Dinner, They Would Be

My family, of course. But, I would need additional chairs!

My Most Memorable Meal

Tom and I were in Brazil with friends. We ate at a restaurant called Ouro Verde, which means “green gold.” At the time, it was one of the Top 5 restaurants in the world. The service was impeccable and food superb. For our first course we ate lobster bisque. The main dish was a locally caught fish, prepared whole and filleted at our table. The dessert was the specialty of the house.

Every few years we go to Greece. It’s such a relaxing trip. We still have many relatives on the islands. It’s always a joy to spend time with them. 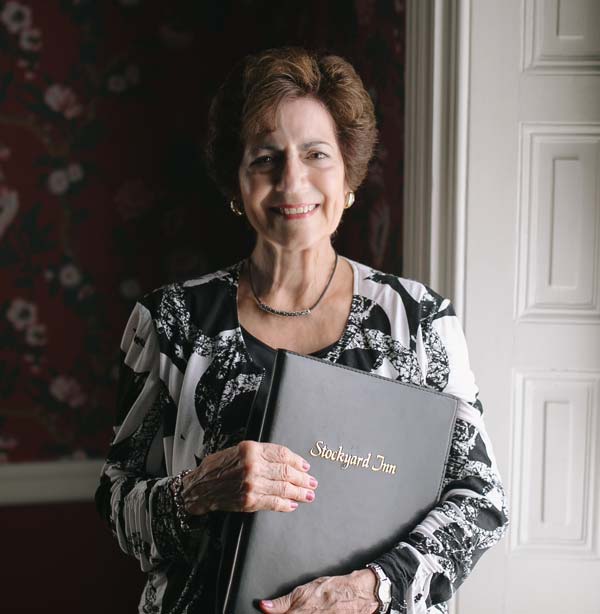