Deirdre Foley Citro has a photo of herself as a 5-year-old standing at an easel instructing other children how to paint. A fortune-teller could not have been more accurate in predicting her future as an artist and a teacher. But, who could foresee she would one day create an online marketplace for senior-aged artisans to sell their work?

Deirdre, a longtime resident of Lancaster County, worked for years as an artist, painting and teaching mosaic tile. For the past 12 years, she has maintained her Newgrange Studio at Kevin Lehman’s Pottery and Lancaster Creative Factory on South Prince Street.

Born in Washington, DC and raised in Maryland, she always knew art was her future. Her early years were spent studying at Montgomery College, Towson University, Johns Hopkins and Maryland Institute College of Art. She also studied mosaic tile in Montreal and Philadelphia. Several of her mosaics hang in the Marriott Penn Square/Lancaster County Convention Center complex. She considers herself fortunate to be involved in two things she loves: art and teaching.

This year, as she turned 64, Deirdre realized that because of arthritis, her hands were not as able to endure the long hours of “nipping” that is used in creating mosaic tile. (Nipping entails using a pincer-like tool that enables the artist to create more precise lines.) “I like to do a more exact form of mosaic, which requires nipping,” Deirdre explains.

Looking ahead to the future, Deirdre realized she may not always be able to do mosaic. However, like many other artists, she is talented in multiple media. Having worked with cloth in the past, sewing has become her newest creative outlet. Now, she is creating magic with wool and thread. She perceives this new endeavor as something she can lean on to augment her retirement income.

Through research, she has become aware that many others over the age of 55 are in need of supplementing their incomes, as well. Unfortunately, age hinders another merchandising outlet for artists: attendance at shows. “Seasoned” artists simply don’t have the ability (or the desire) to travel and set up and man booths weekend after weekend in order to exhibit their work.

Deirdre’s desire to help other artists (as well as herself) provided the impetus for creating an online site where “ageless” artisans will be able to sell their work. She prefers to use the word “ageless” rather than “aging” because although an artist may be getting older, he or she still possesses the skills that can be passed down to future generations. Part of Deirdre’s goal is to encourage artisans to mentor the younger generation. This will encourage the exchange of skills and ideas. “In my case,” Deirdre adds, “someone to teach me social-media skills. That needs to be firmly in place before the website gets actively up and running.”

Working with her husband, James, Deirdre formed a Benefit Corporation (or B-Corp) and aptly named it “Autumn Hands.” A B-Corp is a company that uses the power of business to solve social and environmental problems. In 2010, Maryland became the first state to pass B-Corp legislation. Pennsylvania followed in 2013, allowing companies whose intent is to put social goals ahead of making profit to form. This was directly in line with the Citros’ goal of using business as a force for good.

The logo art for Autumn Hands is based on an original fraktur “tree-of-life” that is altered by Deirdre and employs the colors of autumn. A vibrant green sprout at the base of the tree carries with it the idea that while people may be in the autumn of their years, they still possess the skills and knowledge that can be passed down to the next generation – the sprout representing the next generation.

Deirdre reminisces about a friend who retired and moved to Florida. She had been a ballet director and instructor for many years, but now lives on a limited income. Being a very talented woman, she now loves making ballerina teddy bears and uses this as a way to augment her income. Deirdre notes that such people will be able to benefit from this online marketplace.

James, who works in IT on a full-time basis, is there to answer any questions Deirdre has, plus he advises her about things she needs to consider going forward. She refers to him as her “help desk.” Her goal is to have the site operational sometime this winter. They have already established domain for the website: autumnhands.com. A very successful fundraiser was held this past summer and the proceeds will aid in the launch of this online marketplace.

Of course, there are other sites through which artists can sell their work: Etsy, Artfire, etc. But, as Deirdre points out, “Our goals differ in that we want to specifically help aging artisans augment their incomes.” Quality pieces, whether functional art and crafts from first-time artists or fine art from established artists, will be featured. Several artisans are already lined up to use the site. 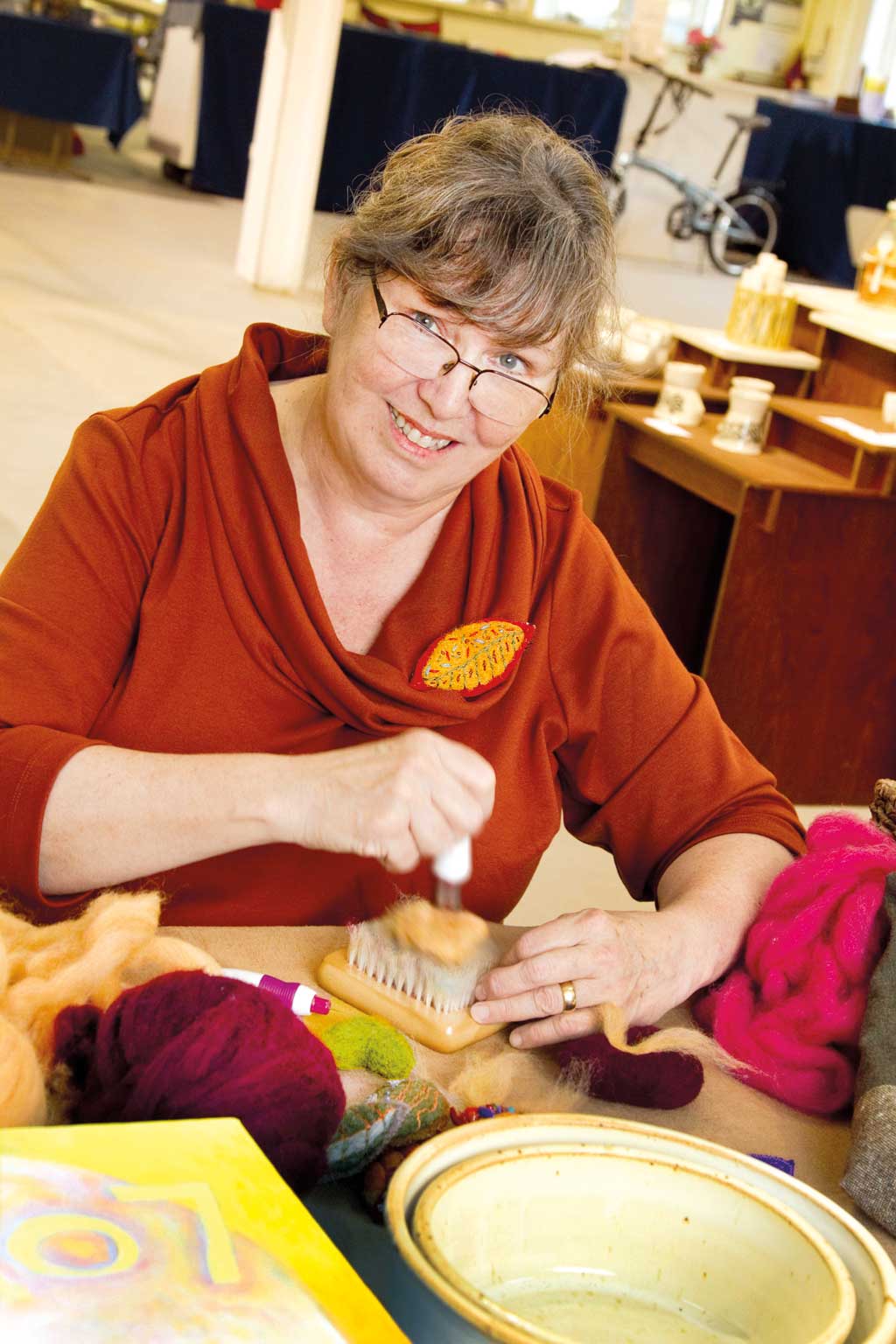 Deirdre at work on creating felt that she uses to fashion pins (she is wearing one) and other decorative items.