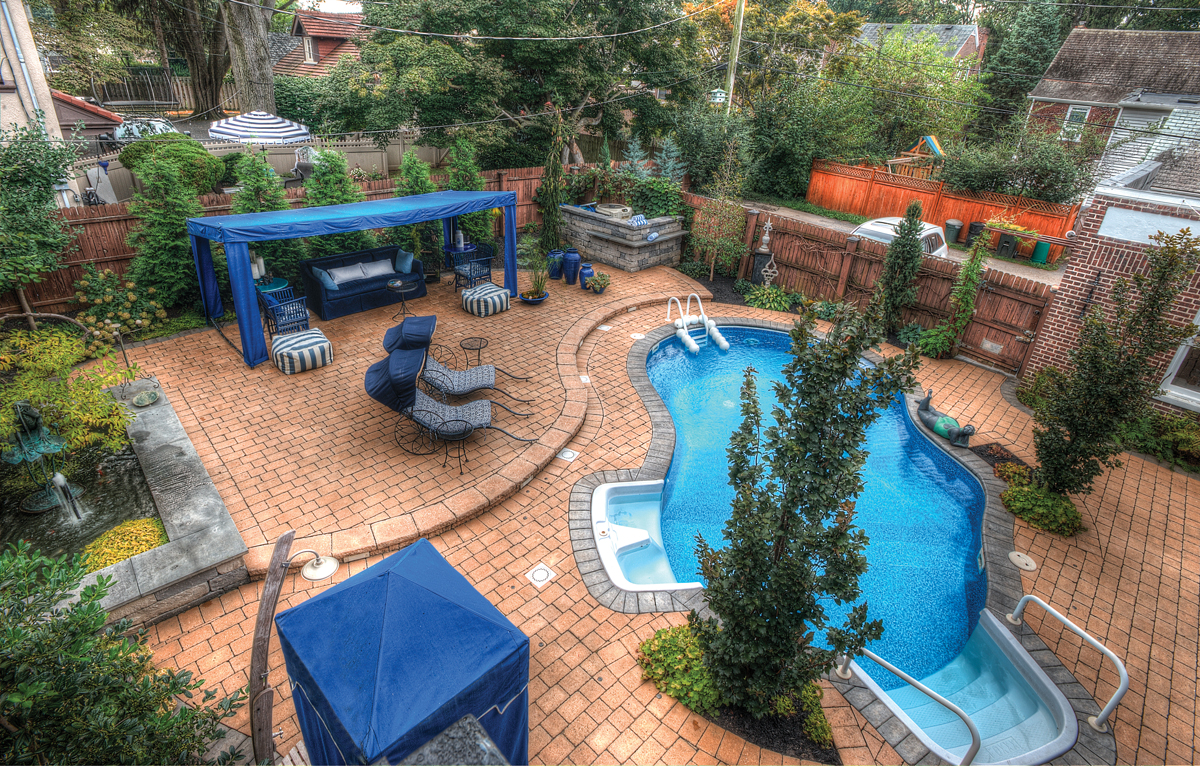 There’s a new buzz term – Outdoor Homing – that defines outdoor living in 2019. It refers to our penchant for making the outdoors as welcoming, beautiful and personal as our indoor spaces. Elaine and Glenn Pottberg’s home exemplifies the concept. Ten years ago, they were toying with the idea of downsizing. But, they loved everything about their house – except for the backyard.

The Pottbergs’ home qualifies as one of Lancaster’s storied residences. Designed by architect C. Emlen Urban, and built in the early 20s, it was destined to become a wedding gift from Andrew H. Rote to his bride, Mildred. It would be the Rotes first and only home – Mr. Rote lived there until his death in 1956 and Mildred until the early 90s, when her failing health prompted a move to a retirement community that provided nursing care. The home remained vacant until five years after her death.

When the Pottbergs first stepped inside the house, Elaine recalls her initial impression as being in a time warp – specifically the 1960s, which appealed to her love of period and vintage furnishings and accessories. “It was an amazing house,” says Elaine. “It was in perfect condition.”
She also discovered many things that were original to the house, including leaded glass, the glass door knobs and the keys for each door. The house also had some quirky elements. For example, there was a doorbell in the floor of the dining room. Elaine suspects it provided a way for the Rotes to summon their household help. (It remains in place.) The basement held a root cellar, next to which was a dumbwaiter that serviced the kitchen and second floor. 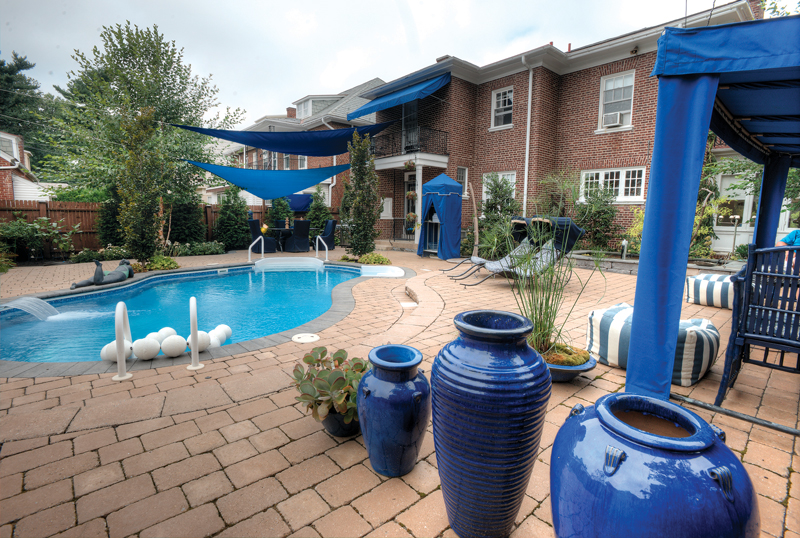 Outside of some cosmetic work, the Pottbergs left the house as it had been designed. The exception was the kitchen – it was beyond outdated. “When the new kitchen was being designed, people kept saying we had to tear down walls and open up the first floor,” Elaine explains. She and Glenn ignored the suggestions, as they preferred to maintain the integrity of Urban’s design. “So what if I have a small kitchen,” she says.

However, the backyard was in need of some serious work. “It was just grass and a tree,” Elaine explains. In 1999, they updated it by adding two patios, a koi pond, trees and extensive landscaping. But, it wasn’t the low-maintenance getaway they had hoped to achieve. “It was a lot of work!” Elaine recalls.

Ten years later, the Pottbergs started to have their stay-or-go discussions. Again, the backyard was the tipping point. The landscaping was overgrown. The trees had grown tall, plunging the rear of the house into darkness. Finally deciding they were staying put, they removed everything from the yard (except the koi pond) and started anew. 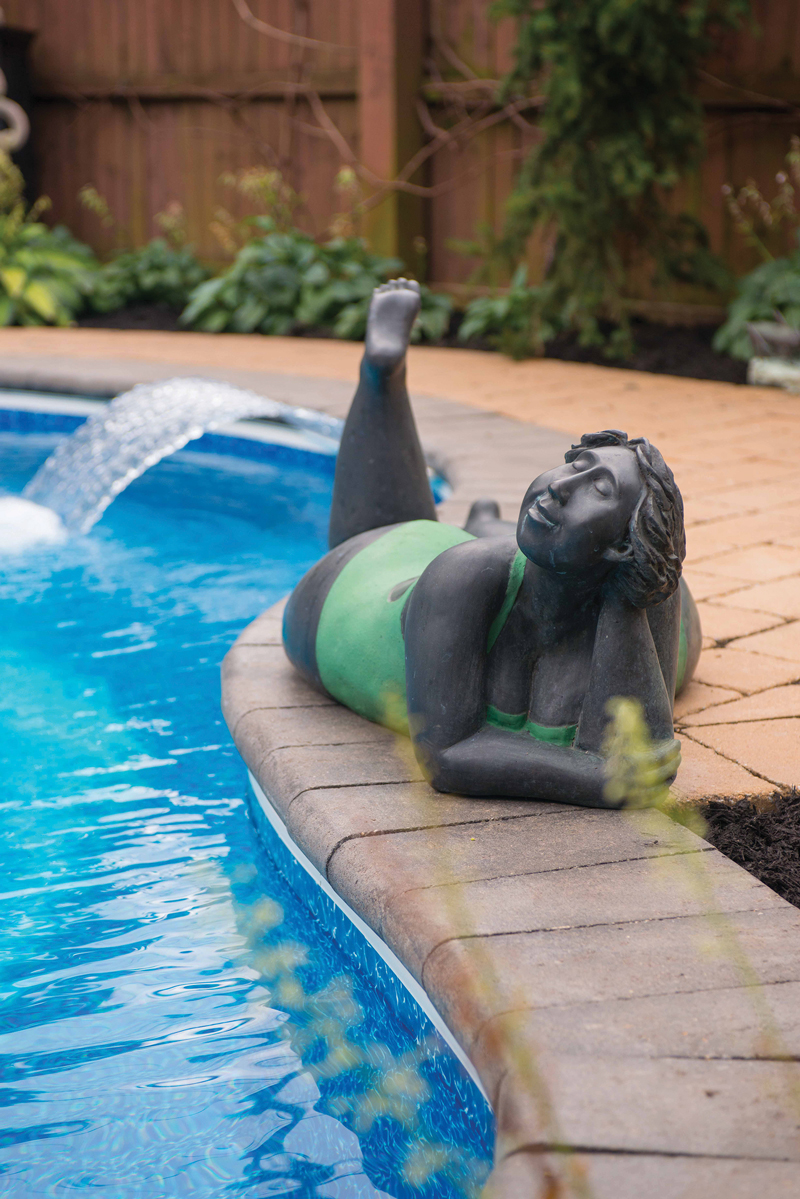 “I wanted to create my own little backyard resort,” Elaine explains, adding that such a plan would negate the need for frequent weekend trips to Rehoboth. “We were getting tired of fighting traffic every weekend,” she adds.

The Pottbergs launched their backyard makeover by installing a pool. Searching for a way to make the area as maintenance-free as possible, Elaine suggested they cover the ground with pavers. She selected the E.P. Henry pavers and hired James Stoltzfus to install them. She also came across landscape designers, Inch’s Landscaping, at the Pennsylvania Garden Show of York and was inspired by their display. “I love what they selected,” Elaine says of the river birch trees, the airy evergreens, hydrangea and other shrubs that Jeff Inch chose for the space. Lighting illuminates the area, making it perfect for entertaining.

Elaine then put her signature touch on the space. As the pool is its centerpiece, blue and white became the overall color scheme. Elaine thinks of it as Italy meets Asia. The cabana qualifies as a find. Its framework is original to the property, as it was fabricated by A.B. Rote & Co., a structural steel and ornamental-iron fabricating company that was located in Lancaster until it closed in 1996. She worked with CB Dombach to create the canvas enclosure for the cabana, as well as the sun sails that cover the dining area. 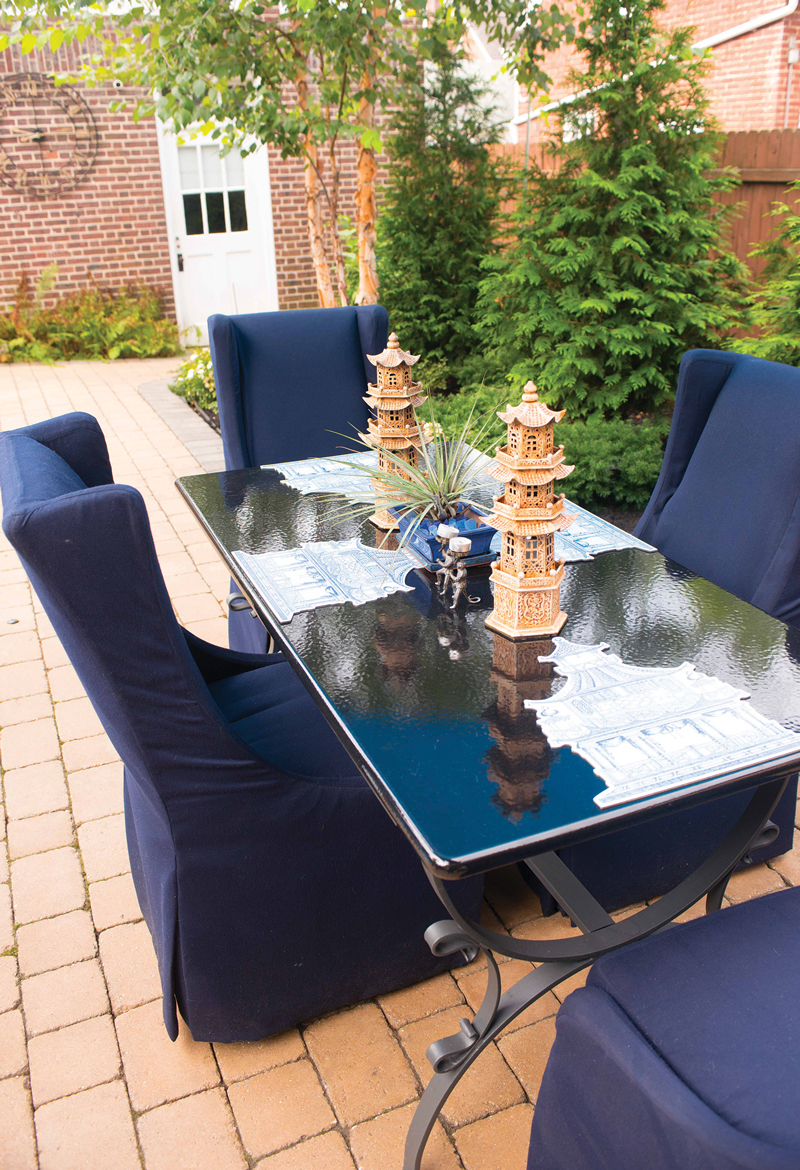 The signature blue canvas also covers the telephone booth that Elaine spied at a garage sale in New Holland. When she saw it, an idea popped into her mind: towel cabana! While the phone is no longer in place, the booth-turned-cabana is filled with everything a person would need for a day by the pool – towels, sun-tan lotion, etc. An outdoor shower, which is hooked up to the water line, stands next to the towel cabana.

The furniture is from Lane Venture – Elaine traveled to High Point, North Carolina, to visit the showroom and choose the slipcovers for the sofa in the cabana and the chairs in the dining area. 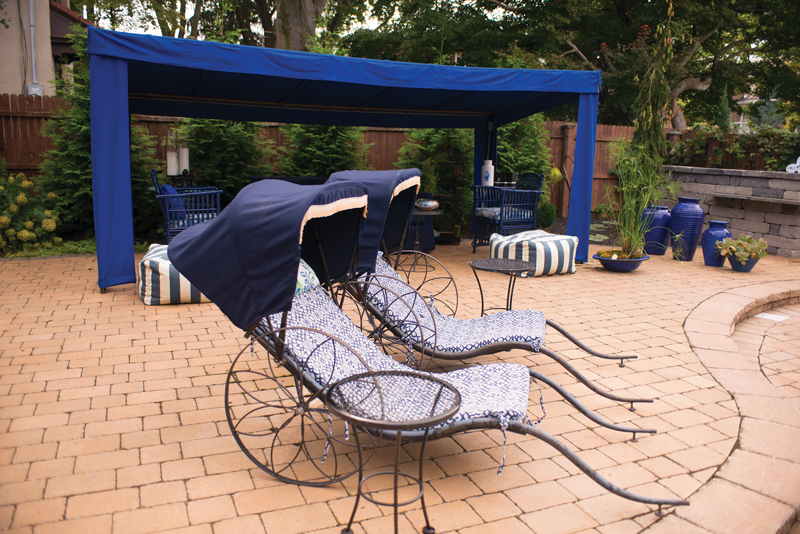 The bonneted lounge chairs represent another find. She spied the Russell Woodard chairs at the extravaganza known as Brimfield Antique Flea Markets in Massachusetts. While she passed on them at the time, she noted the dealer’s name.

As far as outdoor furniture goes, the Woodard name is legendary. Woodard and his brothers began making casual outdoor furniture in the 1930s, first making a name for themselves with wrought iron and later venturing into fiberglass and tubular iron and aluminum during the 50s and 60s. Their signature furnishings gained further fame when pieces were purchased for the White House.

While Elaine passed on the rickshaw chaise lounges, she never forgot them and tracked down the dealer – who lived in Maine – almost two years later. He still had them. She told him to consider them sold and that she would pick them up. She recruited a friend to make the trip with her and told Glenn she was going shopping and would be back in three days. 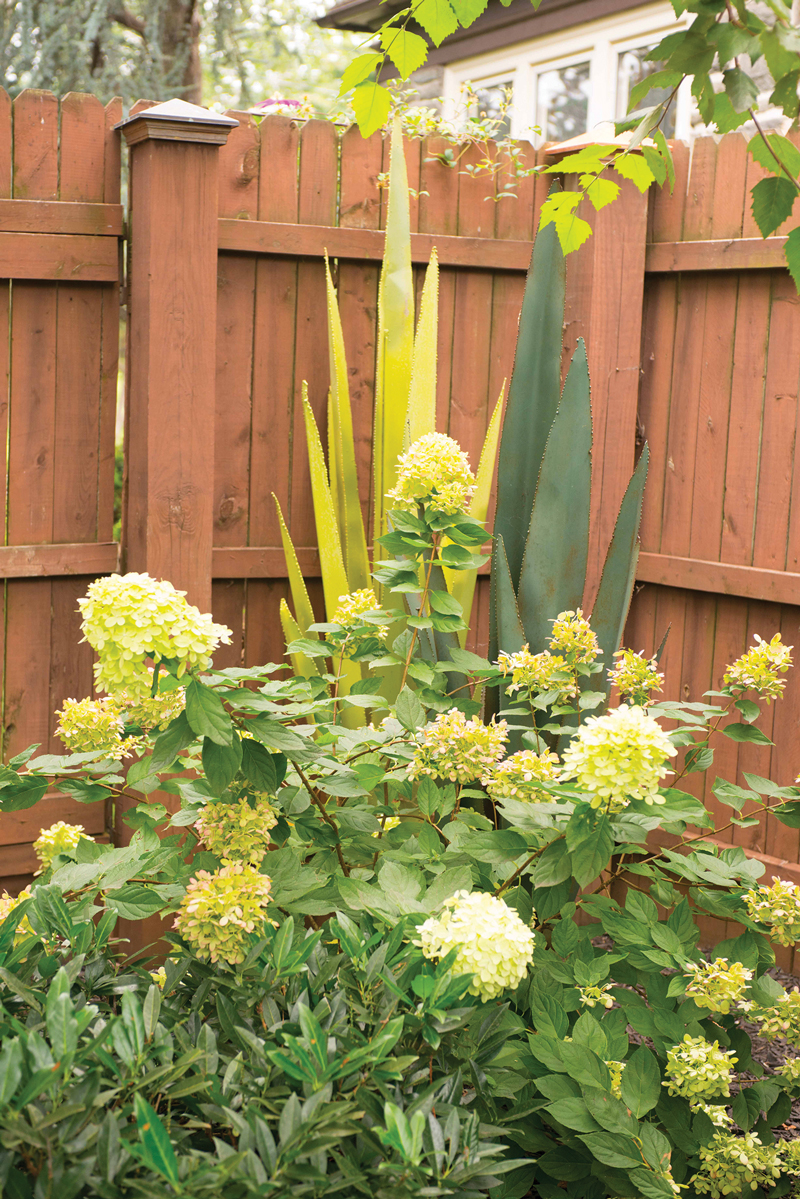 Glenn goes with the flow. He was game to haul the phone booth home. He made room in the car for the oversized cobalt-blue pottery Elaine spied in Point Pleasant, New Jersey. Ditto for the Bathing Beauty sculpture that caught her eye in Delaware and now lazes by the pool. They drove the metal yucca “plants” they spied in Mexico to a town in Arizona and shipped them back to Lancaster. 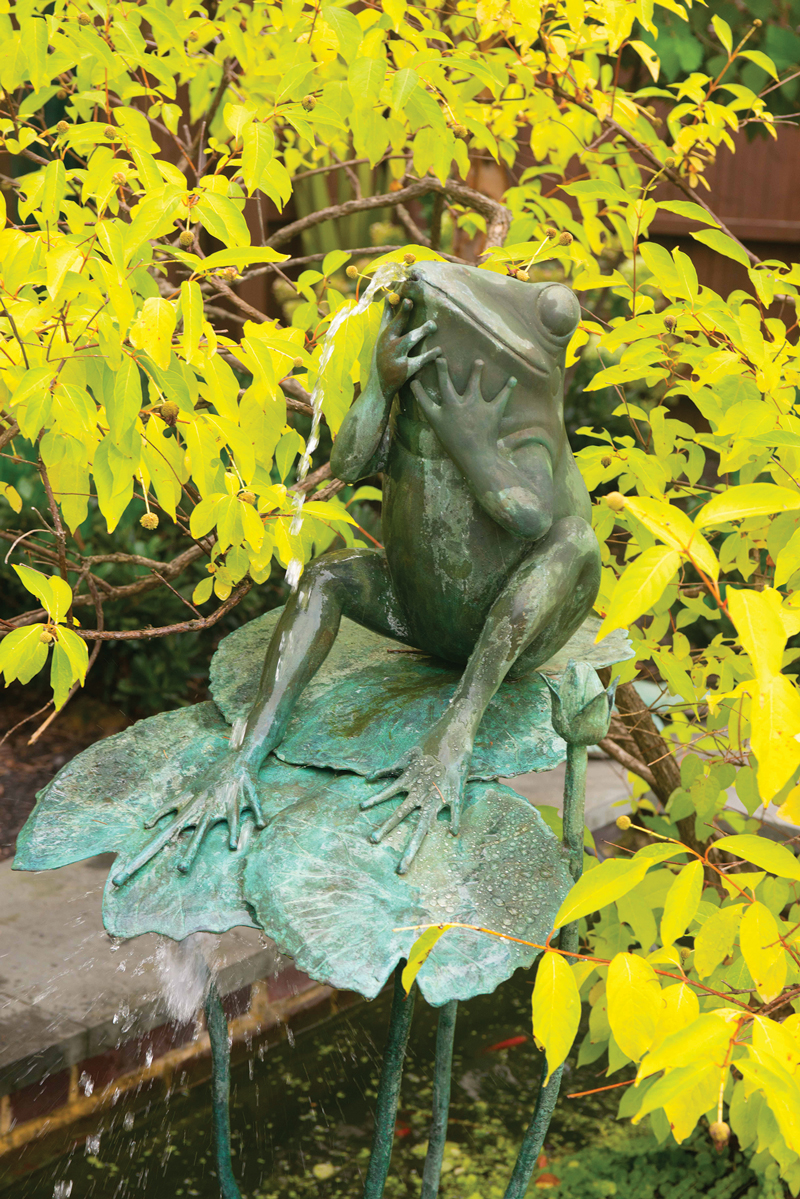 DIY projects also figure into the decor. For example, Elaine spray-painted the rattan chairs so that they would echo the color scheme. She’s also a fan of bird cages – the larger the better – and fills them with plants and other objects. 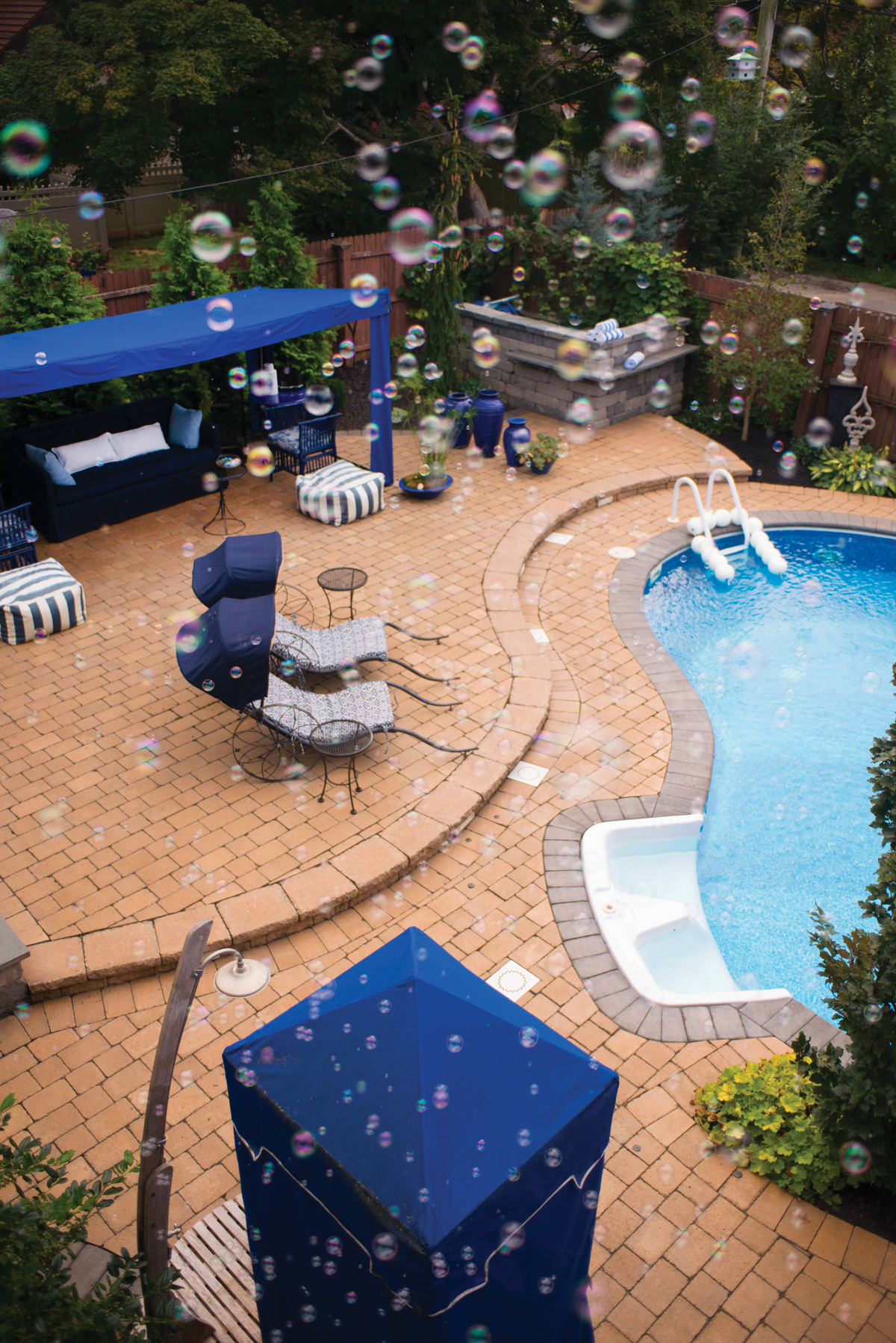 They’ve even put the fence that skirts the back of the property to work as a living wall. It’s filling in with succulents that require very little maintenance. Last, but not least, is the bubble machine. “Round is my favorite shape,” Elaine explains. “I think bubbles are romantic and pretty. Plus, they’re fun – who doesn’t like bubbles?” she asks. The bubbles are a hit with guests, whether they’re adults attending a cocktail party or children celebrating birthdays.

Glenn and Elaine love this extension of their home. It’s their go-to place to relax, as well as entertain. It’s very low-maintenance. “Now, we don’t have to mow the lawn, and there’s no need for edging and weeding,” Elaine notes. “We use much less mulch. We can simply enjoy it.”