Craving Southern-style barbecue and all the fixins? Divine Swine In-Out BBQ in Manheim is definitely a place to try. Opened in November 2014 by Scott and Heather Bowser, owners of Mount Hope Estate & Winery and the Pennsylvania Renaissance Faire, the restaurant’s barbecue meats are smoked on the premises.

Cooking and serving barbecue has always been a passion of Scott’s, and Heather’s family is from the South. They’ve worked to bring traditional Southern barbecue north. We’ve had a place specializing in smoked meats at the Faire for some time. The restaurant is an extension of that,” explains Candace Smith, Mount Hope’s director of sales & communications.

The facility that houses Divine Swine is located across Route 72 from the Ren Faire, which is open weekends through October 30. The farm-style building had housed Hitz Farm Market for a number of years. “When the opportunity to purchase the farm market property came up, Scott and Heather took it,” Candace says.

She adds that like the name suggests, there are “a lot of in and out orders due to the fact that we’re close to the [Lancaster-Lebanon] turnpike exit, and we do have people stopping in after the Faire or other events that we host. We also have a lot of customers from the local area.”

Divine Swine seats about 100 indoors and another 50 on the outdoor patio. Indoor seating is located on two levels. Seating on the first floor is a mix of keg hi-tops (yes, the base is an actual keg), counter seating and a booth. The second floor boasts booths, tables and a children’s area that features a chalkboard paint wall. The “farm eclectic” décor includes a variety of pig-shaped cutting boards and a wall that’s covered with old doors. “The doors have a lot of character, and they’re a real conversation starter,” Candace says.

Divine Swine’s smoke master arrives at 2 a.m. to prepare meats for the smoker. Candace says the meats are smoked using either hickory or apple wood. “The challenge is that you make a specific quantity of smoked meat each day, so we sometimes run out of an item. That’s something that is hard for people to understand. But, now that we have nearly two years under our belt, we have more of a handle on the quantities to smoke,” she explains.

Meats are served without barbecue sauce, which allows customers to select their favorite or to create something original by combining several of the sauces made in-house. Candace points out that some of the recipes, including the corn pudding, are made using recipes from Heather’s family.

Popular menu items include the Cheesy Swine – a sandwich that entails pulled-pork stuffed between Texas Toast with mac & cheese and melted sharp cheddar cheese and then grilled – and its cousins, the Cheesy Bovine (beef brisket) and Cheesy Chicken. St. Louis-style ribs are also on the best-seller list. Wednesday night is Divine Swine’s rib feast with specials on full- and half-racks. Divine Dine for Two is offered Thursday and includes two sandwiches, two sides and two sodas for $20 (eat-in only).

Other menu items include a hearty chili, Cajun sausage, smoked beer chicken, hush puppies (available as a side or an appetizer), fresh-cut fries and brisket poutine fries (fries, smoked brisket and cheese curds with a light brown beer gravy).

There’s even a kid’s menu.

To complement Divine Swine’s tasty meats, guests can enjoy a craft brew from Divine Swine Brewing Co. The brew list features ales, lagers and some seasonal offerings. For those who prefer wine, Mount Hope wines, such as honey mead, pink Catawba, sangria and even margarita wine, are offered. And, yes, they pair well with the tasty menu items.

For yet another taste treat, try Lancaster County Cider. Candace notes these hard ciders are also crafted locally by Divine Swine’s owners. It’s available in a sweet cider as well as seasonal flavors such as pumpkin. Initially offered in November, the hard cider has become quite popular. It’s on tap at the Ren Faire and Divine Swine and is also sold in 22 oz. bottles at the Mount Hope Winery and the Mount Hope Wine Gallery and Rumspringa Brewery in Intercourse.

Another area of growth for Divine Swine has been catering, whether it’s an office luncheon, a family picnic or special celebration. 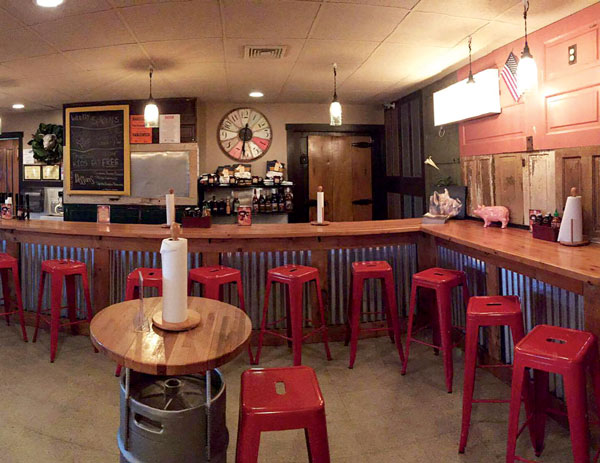 The first floor of Divine Swine features a wood-topped bar and hi-tops crafted from beer kegs.