We value many trees in our gardens and public landscapes for their showy spring flowers or brilliant fall display. However, the splendor of a tree’s bark is one ornamental feature that is often overlooked.

I’ve noticed that Lancaster County gardens feature deciduous shrubs for their colorful bark or stems during the winter. The red- and yellow-stemmed dogwoods (Cornus), willows (Salix), and several species of Japanese maples (Acer palmatum ‘Sango-kaku’ is an outstanding example) are some that come to mind.

But there are also trees worth featuring in our borders because of their bark, which will grab our attention during the dormant season. In this first of a two-part gardening journey, we are featuring some conifers. Conifers! Gardeners do not usually think of planting conifers for their bark. I think you’ll be pleasantly surprised. (A future column will recommend deciduous trees with exceptional bark.)

What follows are a few landscape-sized conifers that have distinctive bark. 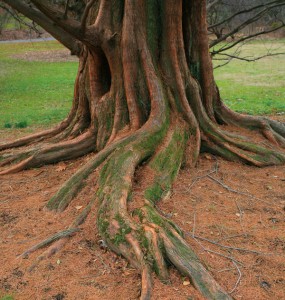 Considered one of the greatest botanical finds of the last century, the DAWN REDWOOD (Metasequoia glyptostroboides) was known only from fossil records until a small population was discovered in the forests of central China in 1941. Seeds were collected and distributed in 1948; today it is widely planted and available in most nurseries. Because it is strong and vigorous – reaching 40 to 50 feet in fewer than 20 years – it is best suited to larger properties. It becomes broad and conical, very uniform, with a sharply pointed top on a central single stem. It has a very distinctive winter habit. It is a good choice for wet, even boggy soils; however it will grow on dry sites once established. It will accept pollution and urban conditions.

Although technically a conifer, it is deciduous; its ferny leaves, which are green in the spring and summer, turn yellow-brown to pink, even apricot, then a vibrant copper-brown before being shed in the fall.

BARK: In winter, the tree’s distinctive winter habit and bark are on display. The orange to russet-brown bark develops fissures with age and peels in long strips. The base of the tree becomes buttressed and irregularly fluted. Children know this conifer as the “armpit tree.”

Put thought into where you place a dawn redwood; it will rapidly grow too large for small gardens, but it is just the thing in a wide range of larger gardens and parks. 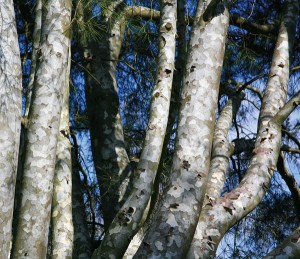 LACEBARK PINE (Pinus bungeana) is native to China. It grows extremely slow when young (therefore, it’s one of the more costly and rarer conifers available in nurseries). With age it reaches 30 feet tall and becomes open, flat-topped and rounded with a rather sparse branching habit.
The stiff, dark-green needles are grouped in threes (our native white pine has groups of five).
It requires good drainage and full sun.
Because of its open habit, heavy snow loads should be brushed off promptly to avoid limbs breaking.
BARK: Its most ornamental feature is the bark, which peels in patches (somewhat like a sycamore, though not with that tree’s messy shedding) to reveal a patchwork of brown, gray, olive, light purple and white after the tree is 8 to 10 years old. Ancient trees become bone white. One could contend that it has the most beautiful bark of any conifer.

It should be planted where it can be viewed throughout the year. 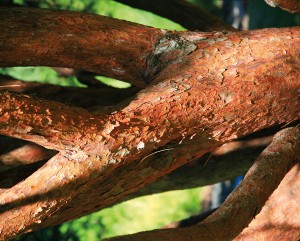 It is very slow growing and prefers full sun and well-drained soils.

It does not look like a typical pine tree because of its irregular habit and multi-trunked curved trunk with horizontal branches and a flat or domed top. A commonly available selection is ‘Umbraculifera’ (also called ‘Tanyosho’) and referred to as the umbrella pine.

This two-needled pine is particularly admired as a bonsai specimen and is indispensable in Asian gardens. It grows larger in its native countries and is a source of building lumber, but in gardens it rarely exceeds 20 feet.
It has no major pest or disease problems.

BARK:  The bark is orange to orange-red or bright reddish brown, and peels away from the trunk in scales. Old trees display scaly gray plates with deep reddish furrows. 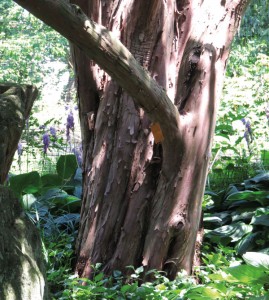 ENGLISH YEW (Taxus baccata) is one of Britain’s three native conifers; many magnificent specimens can be seen there, some claimed to be thousands of years old.

Yews are often used these days as a clipped foundation planting (not the best use in your writer’s opinion).

This conifer is more suitable trimmed into dense hedges and screens or shaped into topiary and used on large properties. However, when allowed to mature, it becomes a broad-spreading, dark-green evergreen tree.
Yews will tolerate considerable shade but do not like wet soil. Its foliage is poisonous to farm livestock, but not to moose, elk or deer. (Suburban gardeners are well aware of the special fondness of white-tailed deer for garden yews.)

The tree’s alkaloids have been developed as an anti-cancer drug.

The wood of a yew is very durable and has a certain elasticity, making it ideal for its traditional use for making bows and other ancient weaponry. It is claimed that Robin Hood made his weapons from this wood and that he was buried beneath a yew. Yews are a symbol of immortality, and over the centuries have been widely planted in cemeteries.

BARK: The bark is reddish to dark-chestnut-brown and exfoliates from the trunk and larger branches in long, thin strips revealing purple-red patches.

The SCOTS PINE (Pinus sylvestris) is native to the British Isles and is established in most of Europe, Asia, Canada and northern United States. It is an important and popular holiday tree because of its rapid growth and blue-green color.

BARK: Its orange scaly bark exfoliates in small, irregular papery plates. The bark is very conspicuous since the trees are often high-branched.

I don’t recommend planting Scots pine due to the fact that the species is intolerant of heat and drought and, therefore, does not do well in our area over the long term. 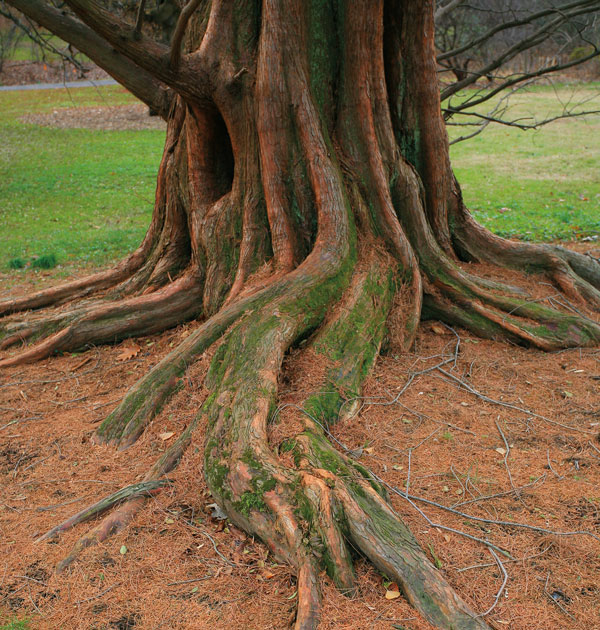