Barns are quintessentially Lancaster County, standing as a testament to the county’s agricultural heritage. Adaptive reuse is helping to ensure that these beloved structures survive and thrive in their new roles as restaurants, event venues, commercial spaces and yes, even as homes. 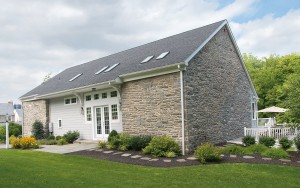 Natural light fills the interior space of the one-time barn thanks to skylights, French doors and windows of various sizes.

With twins on the way, the size of Nikki and Dean Metzler’s family was set to become a fivesome, which meant they would be outgrowing their condominium. “We definitely needed a bigger house,” Nikki says. So, they began attending open houses and visiting communities whose homes offered everything on their must-have list. Nikki, however, was also looking for something that spoke to her soul. As fate would have it, her soul-connection – a stone farmhouse dating to the early 1800s – was about a mile away. “I always admired that house,” she says of driving by it on an almost daily basis. One day, a For Sale sign appeared. To her dismay, the sign didn’t apply to the farmhouse; rather, it was for the barn and acreage at the rear of the property.

Curious, Nikki studied the barn, which dates to 1811. Previous owners had begun a remodeling project but abandoned it, leaving the roofless stone shell and new timber framing exposed to the elements. “As soon as I saw it, I wanted it,” Nikki relates. “I always knew I wanted something that’s not typical.”

Nikki’s Franklin County roots undoubtedly influenced her style. “I grew up in a log home. My parents operated a museum that had a reconstructed barn [on the premises],” she explains, adding that they were also involved in a number of preservation-related organizations. As for Dean, he admits he “would have been happy living in a development.” However, Nikki’s enthusiasm was infectious and he supported her determination to breathe new life into the barn. With farmland preservation near and dear to her heart, Nikki takes pride in the fact that “we were able to take something that was already here” and not impact farmland. 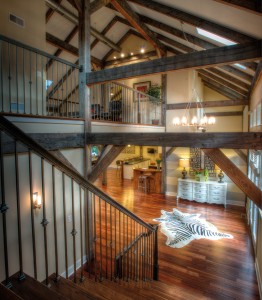 How do you heat and cool a 4,000 sq. ft. barn? The Metzlers chose to go with a geothermal system. “It’s double the efficiency of a regular heat pump, plus it’s very quiet,” says Dean. “We’re happy we made the initial investment.”

The couple also purchased the adjoining plots of land that were for sale in an effort to save the woodland that skirts Mill Creek. According to Dean, the bucolic backyard and adjoining woodland provide never-ending views of nature, as deer, fox, owls and, on occasion, “wayward cows” from a nearby farm appear.

The Metzlers were able to obtain the architectural plans for the previous project. They liked the wide-open floor plan that defines the first floor (describing it as “open but intimate”), the cozy spaces the pitched roof creates on the second floor and the clean lines of the multi-use space that encompasses half of the lower level.

Next, they needed a general contractor and after interviewing several companies, they chose to work with Costello Builders. For Costello, a company that is known for custom homes that employ modern amenities and Old World ambiance, the barn revival would be a unique project to add to their portfolio. Interior designer Laurie Collins was brought in to assist with the selection process.

The kitchen design was of utmost importance. Kevin Martin of Horizon Kitchens regularly collaborates with Costello and was approached to take on the project. Upon meeting with the Metzlers, Kevin determined that Nikki’s primary goal was to create a kitchen that is efficient and organized. Thus, Kevin confronted his first challenge. “Every space in the barn was much larger than they were used to,” he notes, pointing out that from a size perspective, the kitchen would need to be in balance with the other “rooms.” However, Nikki preferred a compact kitchen. 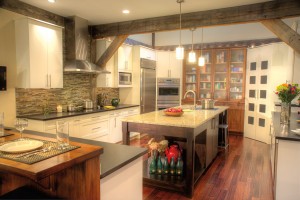 While Nikki prefers a compact kitchen, the open layout of the first floor deemed a more spacious one was required. Kevin Martin met the challenge by designing a kitchen within a kitchen; one aspect is dedicated to work zones, while the other addresses the kitchen as a social hub. Kevin’s second challenge was working around the beams that were already in place. He deems the results of the barn’s makeover as “19th-century barn meets 21st-century urban loft.”

The challenge was resolved by creating what Kevin calls “a kitchen within a kitchen.” The working area consists of clusters of zones that are separated from traffic flow by an island and two peninsulas. The more social aspect of the kitchen is defined by its relationship to the other living areas, as well as the aforementioned peninsulas that flank its entrance. One is used as a breakfast bar and the other as a buffet for entertaining purposes.

Organization is also addressed. A china cabinet and a food/appliance pantry span the rear of the kitchen. A beverage center at the front of the kitchen provides the makings for breakfast or a quick snack (and keeps the refrigerator from being opened umpteen times a day). “Our five-year-old can help himself,” Nikki points out.

A Command Center keeps the family organized. A cabinet opens to reveal doors lined with whiteboard. Messages and reminders can be written on the surface and easily removed. Connections for a laptop/tablet and a telephone are contained within the cork-lined cabinet. Below are drawers that are intended to hold “everything that gets piled on counters or on the staircase,” says Kevin, who points out that the other popular “organizer” – the refrigerator – is becoming obsolete due to the fact that stainless is not magnet-friendly. “A Command Center adds another layer of organization to a home,” he observes. “I’d say that 50% of the kitchens we do contains one. And, they’re totally customized, so each one is different. For example, to make this one more user-friendly, we made the counter higher.” 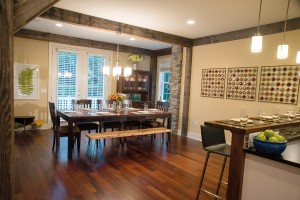 Aesthetically, the kitchen’s style is transitional contemporary. The maple cabinetry – painted a creamy white via a multi-layering process – is composed of flat-slab doors and recessed panel drawers. Bar pulls add a contemporary touch to the cabinetry. The china cabinet’s coffee-stain/glaze provides contrasting color, as does the espresso stain on the farm-table-inspired island. The mosaic-inspired backsplash sparkles with stone and glass. Acid-etched glass adds interest to the doors of the pantry and china cabinet. Polished granite covers the island, while a leathered version tops the counters and peninsulas. Multiple levels of lighting – ranging from skylights to pendants – illuminate the space. Hand-scraped hickory hardwood unites all the living spaces that comprise the first floor.

One might assume that furnishing a barn is challenging. Nikki points out that while the first floor may not have walls, the timber framing and lighting create defined spaces. Thus, their living-room furnishings fit perfectly into the designated space, as did those from the dining room (including, appropriately enough, the benches crafted from barn wood). Oversized art pieces balance the height of the ceiling.

The Metzlers are fans of repurposing and have purchased fill-in items from such diverse sources as garage sales and Craigslist. Dean works his magic with paint to give them an updated look. 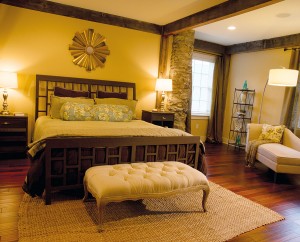 The master suite, which is located on the first floor. 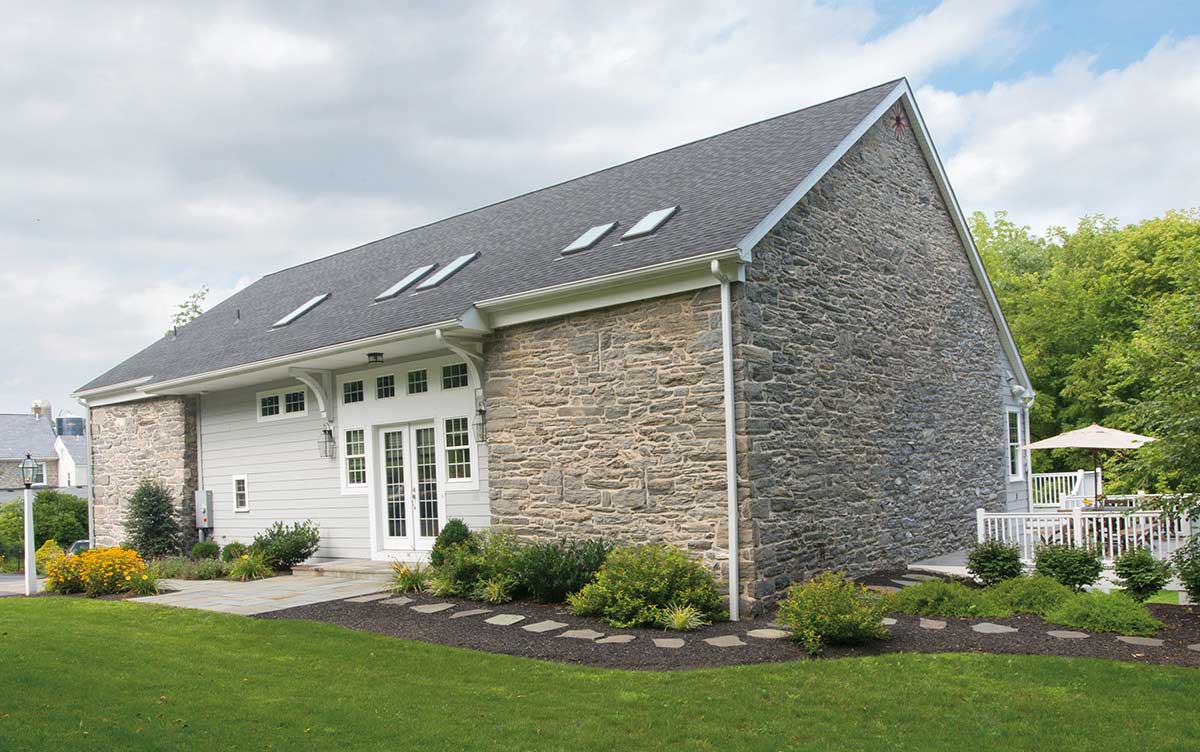 Natural light fills the interior space of the one-time barn thanks to skylights, French doors and windows of various sizes.