How often do you page through a magazine and wonder what inspired a photo spread or what went on behind the scenes of a photo shoot? I always have to laugh when I think back to one of my earliest photo shoots. Vogue magazine came to Lancaster in the early ’90s to photograph a huge spread about the latest style – minimalism. Apparently in the mind of Anna Wintour, the Amish best exemplify the look, so why not go to the source.

As I was acquainted with the owner of the bed & breakfast where the crew would be based, she was able to get us permission to hang out and do behind-the-scenes photography that would run in Lancaster County Magazine in conjunction with the spread that was due to run in Vogue’s September issue. As it turned out, Vogue discovered its competition was preparing to unveil its own take on minimalism in its August issue, so they bumped the Lancaster piece to August. We had no choice but to stick with our September issue, which made us late to the party.

Still, it was very exciting to be a fly on the wall. I still remember stopping by the B&B ahead of the arrival of one of that era’s supermodels and a makeup artist who complained non-stop about the quality of cell service in the Intercourse area. I mean, for gosh sakes, he had to get in touch with Madonna! Surveying the room in which nothing but black clothing from the likes of Ralph Lauren, Calvin Klein and Jil Sander was being stored was mind-blowing!

In my naivety, I expected the photographers and staff to be running around in Chanel suits. That was not the case. They were all embracing the grunge look from head to toe! The supermodel spent all her downtime puffing away on cigarettes. It was sort of disillusioning to see the reality of a big-time photo shoot.

Which brings us to the summer of 2021. Think back to August and what do you remember? Rain and lots of it! We photographed this month’s cover story in two parts. Planning for it started back in March, when the project was simply a construction site that Dwight Graybill of Cocalico Builders invited me to see. The view from it was simply magical. Then again, I was only permitted to turn in my chair to see the view when darkness set in, which probably coincided with finishing off wine bottle number two (or, maybe it was three).

Later, the wheels started spinning in my head. After watching one too many Hallmark movies, a Sex and the City marathon, blubbering through an episode of This is Us and hearing friends say they can’t wait to go dancing again, an idea struck! We’d up the ante and take it beyond a typical home feature.

In May, I presented my idea to Dwight and homeowners Connie Kaplan and Jimmy Borst, who were game to be a part of it. Bobbi Nicole Bentzel of Glamour Room and Tiffany Rupert of Tiffany’s Bridal Boutique agreed to style Connie for the shoot. Jimmy got a tuxedo from Men’s Wearhouse. The cover premise would be they’ve arrived home from a black-tie benefit or wedding, kicked off their shoes and topped off the evening by dancing with the lights of Reading glowing in the background. Photographer Nick Gould was on board and devised a schedule that would accommodate his mid-August vacation as well as my late-month vacation.

On August 4, the weather was gorgeous – as in low 80s and no humidity – for the architectural shots. It was such a beautiful night that nobody wanted to leave. So, we sat and drank wine until 10 or so.

Unfortunately, it was a totally different story a week later for the cover shoot and interiors. On the drive to Glamour Room, the sky was ominous. As we rolled up the driveway of Jimmy and Connie’s home in Galen Hall around 5:30 p.m., the sky turned black. About 30 minutes later – just as Nick and his assistant, Lexi, arrived – the wind began to howl, lightning lit up the sky, thunder echoed across the valley and the skies opened up. Everyone consulted the radar apps on their phones. It looked like the storms would be in the area for the next two hours. There went our schedule! The shot we had meticulously set up the week before would be impossible to get.

Nick quickly came up with Plan B, which prompted a move from the outdoor dining area to in front of the fireplace. Furniture had to be moved and the floor thoroughly dried so that Connie’s dress wouldn’t get wet. Did I mention it was 95 degrees and 150% humidity? Or that Nick and I were on our hands and knees trying to dry the floor with towels?

Despite her best efforts, Connie’s beautiful hair began to droop. Her makeup was sliding off her face. The weather showed no signs of cutting us a break. So, we moved on to Plan C – interior shots and the Cocalico Builders team. 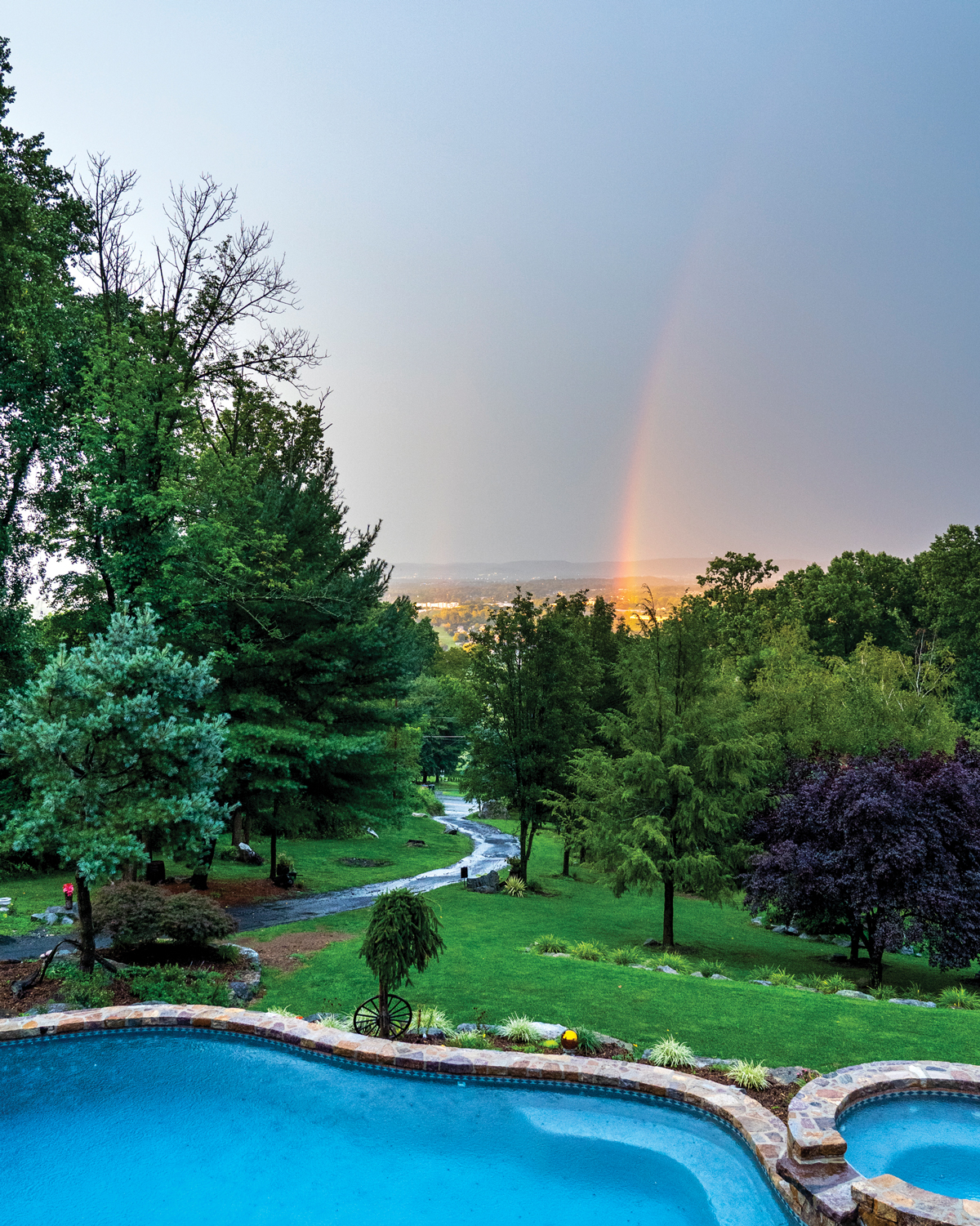 Then, about 8:15 p.m., a miracle happened. The sun began to shine. A rainbow arced over the city of Reading, where the buildings were now bathed in a golden glow. It got maybe five degrees cooler. We told Connie and Jimmy to get dressed, pronto! Despite darkness setting in, Nick got his shots. We all danced!

We hit the road a little before 11 p.m., leaving the place a wreck. Poor Nick had to be in King of Prussia bright and early the next day for a job. I was in a state of exhaustion until Sunday.

Despite Mother Nature not cooperating, it occurred to me that after all these years, I can still say, “I love my job!”