How does one go from prepping and primping sheep for Farm Show competitions to doing hair and makeup for Oscar-winning actress Jennifer Lawrence? For Bobbi Nicole Bentzel, the owner of Glamour Room, it was a career path that started in Manheim and took her to Philadelphia, New York, Los Angeles and back home to Lancaster County. 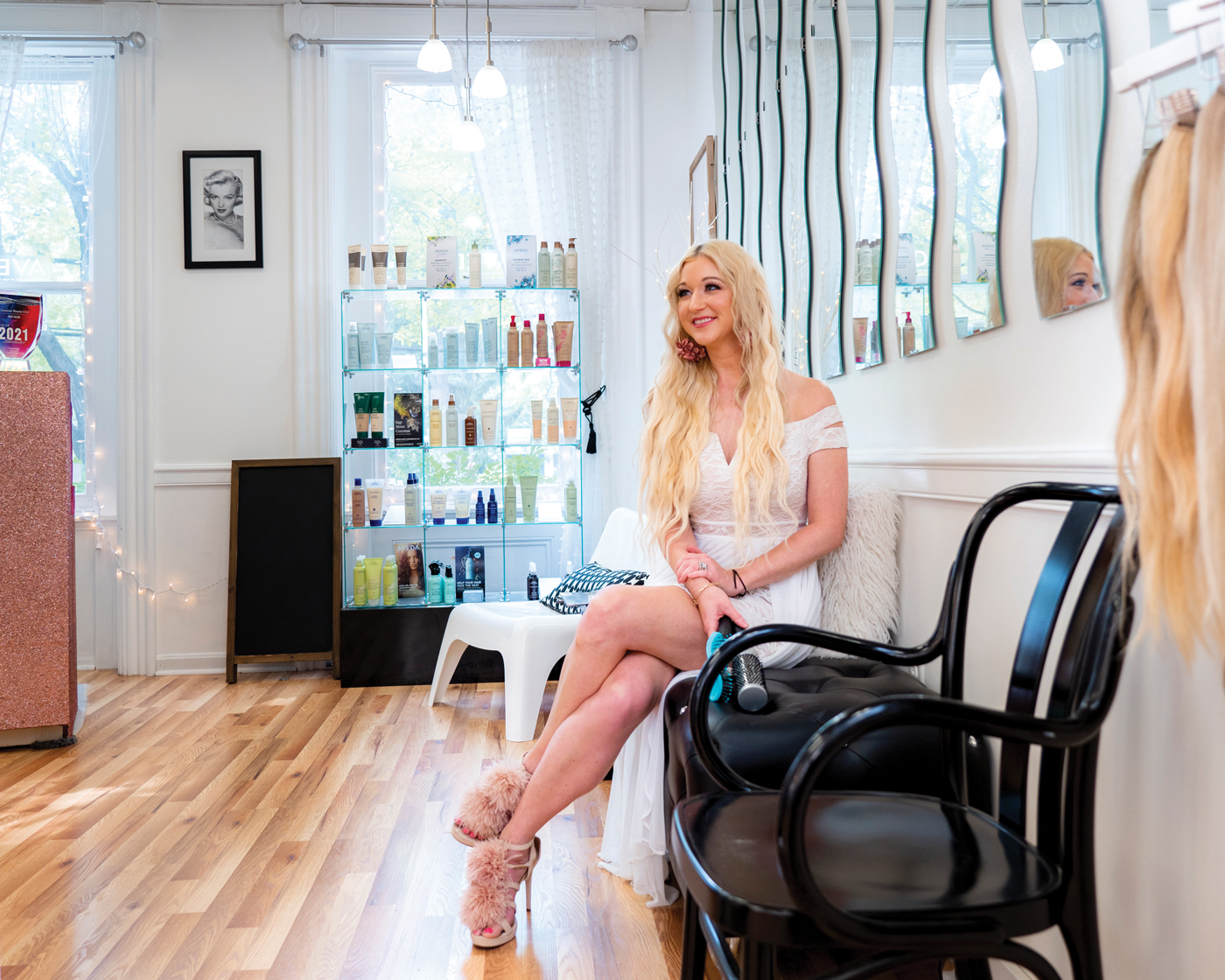 Bobbi Nicole Bentzel transformed a former doctor’s office in the city into a salon that reflects her love of glitz, glam, Marilyn Monroe and the color pink.

Bobbi is simply a delight to talk to. First off, while she loved working with Jennifer Lawrence for an awards show, her all-time in-awe client was Johnny Depp. “Oh, my, gosh … I just love him,” she says. “I kept the brushes I used for him and never used them again.” While working on a photo shoot for fashion designer Michael Kors, she met the man himself. “What I really liked about that project were the shoes one of the models wore. I ended up buying them,” she says of the feathery stilettos she wore for our photo shoot. “I just love shoes!” she says.

Let’s get back to those sheep. “Their names were Glitz and Glamour,” she says of the duo she showed on the fair circuit and helped her to win Grand Champion honors at the Pennsylvania Farm Show in Harrisburg. “I was so excited to be on WGAL!” she says of the news coverage she and her sheep received. To this day, she thinks the secret to her success on the show circuit entailed grooming – the sheep’s beauty routine included a dusting of sparkle before they took to the show ring. 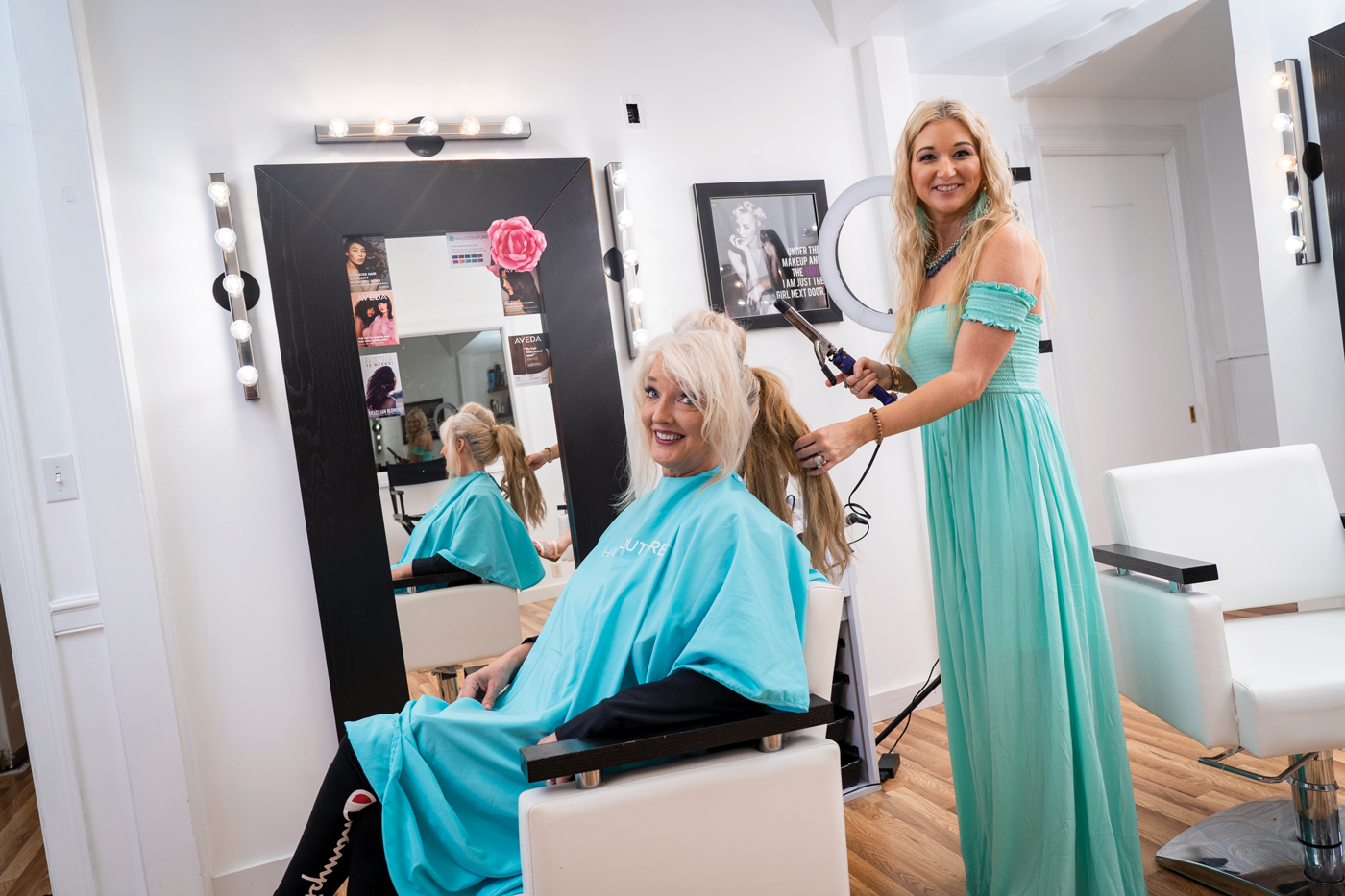 Bobbi always dreamed of bigger things and after graduating from Manheim Central, she set her sights on Philadelphia. “I loved living there,” she says. She enrolled at the Jean Madeline Aveda Institute and after completing her courses, went to work for a salon in Rittenhouse Square. “That was a learning experience in itself,” she says of working with the salon’s wealthy clientele. “I wasn’t used to dealing with people who were accompanied by maids and drivers! Some days I’d find myself holding a dog while I styled its owner’s hair.”

Next, the ambitious Bobbi headed for New York. “I figured there were more opportunities there,” she says. Her intuition was spot on. She prepped models for New York Fashion Week, which ultimately provided her with a ticket to France for Paris Fashion Week. Her work also took her to Miami and Los Angeles for such projects as the Golden Globes, the Victoria’s Secret Angels fashion show, the Nike Kids event, as well as Hollywood galas. “It was very exciting!” she says. 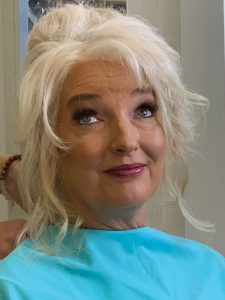 For Connie’s makeup, Bobbi’s plan was to create a dewy, sun-kissed look that extended to rosy lips. The softened smoky eye was enhanced with false lashes. Connie reports that people often tell her she looks like Erika Jayne, one of the stars of The Real Housewives of Beverly Hills. Photo by Sue Long.

Motherhood prompted her to return to her roots. “My kids needed a babysitter, so I called my mother and said, ‘Mom, I’m coming home.’” Back home, she parlayed her experience into styling the hosts and models at QVC in West Chester.

Opening her own salon was always in Bobbi’s playbook. Three years ago, she found a perfect location on the 400 block of North Duke Street. “It was formerly a doctor’s office,” she explains. “I spent nearly a year remodeling it. I had very specific ideas about how I wanted it to look,” she says of the salon area that was inspired in part by Bobbi’s heroine, Marilyn Monroe. “It’s a little bit Hollywood,” she says of the design. “And, it’s a little bit me,” she says of the touches of pink and glitter – her two favorite colors – that accent the space. Down the hall are two rooms that are devoted to skincare.

A year after opening, Covid arrived. “We were closed from March to July [2020],” she explains. “I was so worried! But, we made it through. Aveda was so helpful – they guided us through all the steps we needed to take to reopen and stay safe. I’m continuing to follow their guidelines. We were busy when we reopened. I credit that to social media – I kept our name out there and stayed in touch with clients through posting how-to videos that focused on trimming hair and touching up root growth. We rebounded nicely.”

Despite her tutorial efforts, Bobbi remembers that during her first month back in operation, most of it was spent in repair mode. “Hacked hair, waxing disasters and color fiascos kept coming through the door!” she recalls, adding that she spent considerable time remedying “colors gone crazy and leopard spots.” Women who stopped dying their hair and went naturally gray during the quarantine had second thoughts and turned to Bobbi for help in restoring their preferred hues. “It was a wild ride!” she says. 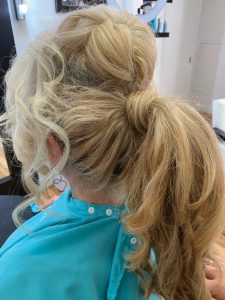 Then, something unexpected occurred. Clients who had recovered from Covid began to notice alarming changes in their hair. “I’d estimate that 95% of my clients who had Covid experienced hair loss,” Bobbi shares. “Others noticed that their hair post-Covid was dry, brittle and dull. I started doing research and suggested they take supplements such as vitamin E-biotin and regularly treat their hair with a conditioner. Bleaching and perms were no-nos.”

Because Glamour Room is located just a short walk from Lancaster General Hospital, Bobbi’s clientele includes quite a few nurses and other frontline workers. “Their skin has definitely shown signs of stress,” she notes. “It’s really irritated. They’ve been dealing with breakouts for the first time in a long time. Part of that has to do with wearing masks for as long as they do.” Clients who are not in the medical field but were wearing masks for extended periods also began to notice similar issues with their skin.

To remedy the situation, she recommended they use her favorite Aveda products, treat their skin with steam and use generous amounts of moisturizer. Services such as facials are therapeutic from both an aesthetic and mental standpoint. Stephanie Collman, Glamour Room’s skin specialist, has been so busy with facials and the must-have treatment, micro-needling, that an expansion is on the drawing board.

With Covid restrictions lifted, one service that has made a comeback is hair and makeup for special events. “Weddings are back with a vengeance,” Bobbi notes. Because weddings are in catch-up mode, she reports they have been “happening every day of the week.” Glamour Room has been helping bridal parties look their best by providing services in the salon or on-site. “All the venues now have wonderful get-ready facilities,” Bobbi has come to discover. 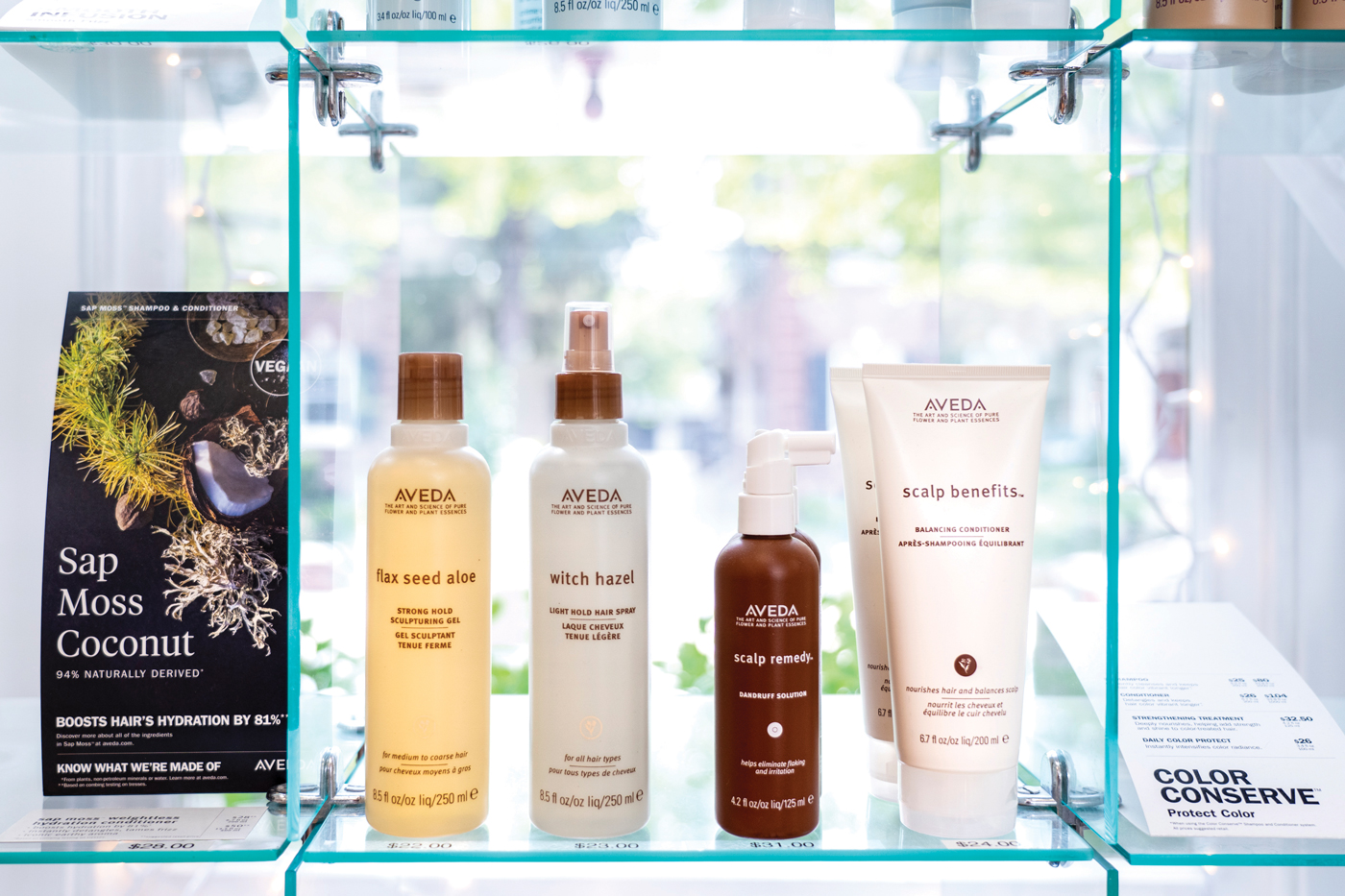 Bobbi’s stock of Aveda’s plant-infused products has proven to be beneficial for post-Covid clients dealing with hair issues.

What’s trending? Bobbi, who also devotes her time to styling models for commercial shoots, fashion shows and other projects, says self-styling tools continue to improve. She raves about the new Dyson dryer that is a brush and dryer in one. “It’s really quiet and comes with interchangeable brushes,” she notes. “It’s going to be my Christmas present to myself.”

The new color trends for hair include fantasy or hologram (think of the rainbow) and twilighting, which is a combo of balayage and baby lights. 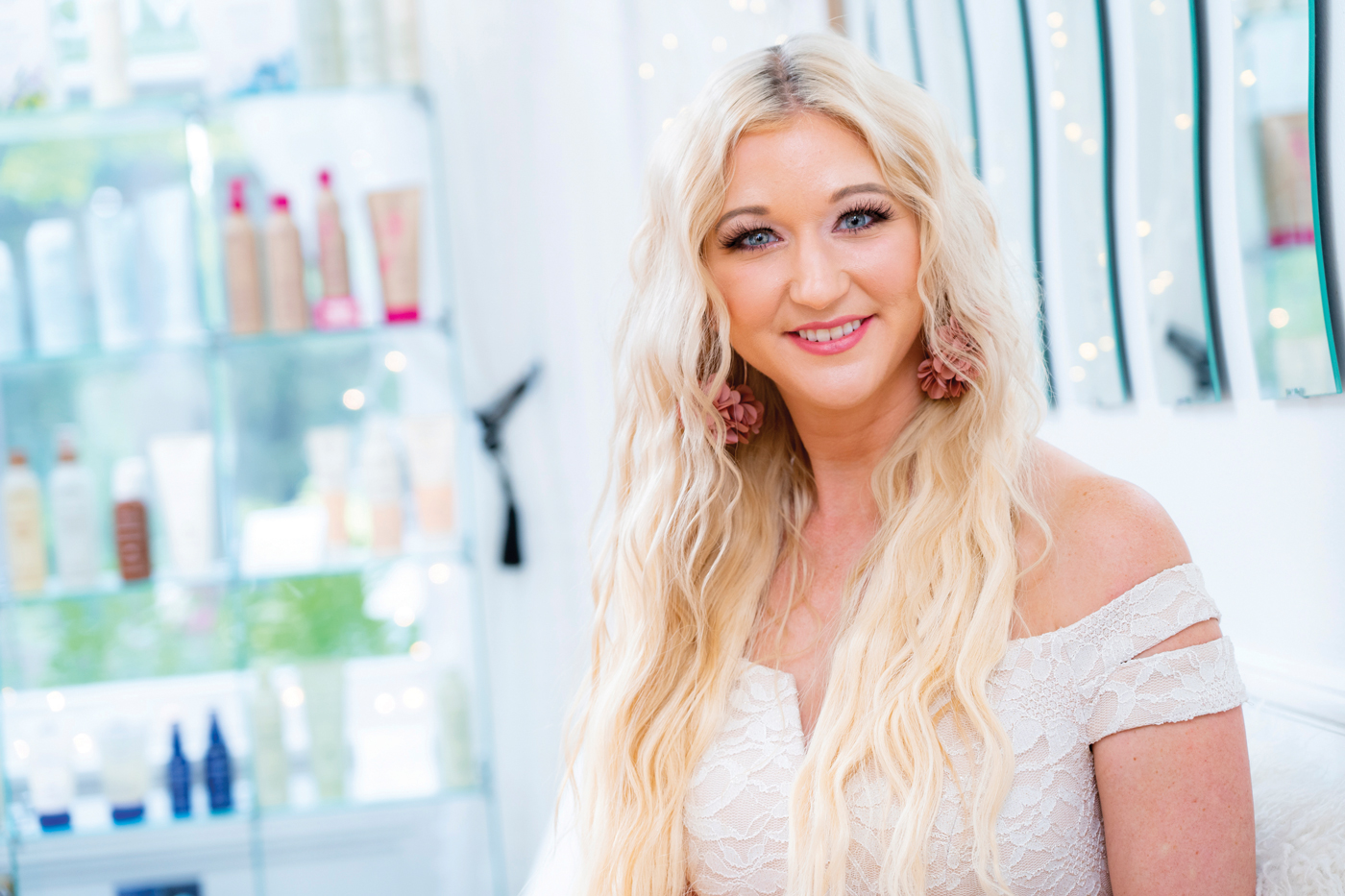 Bobbi’s career path, which began in Manheim, has taken her to Philadelphia, New York, Los Angeles and back home again.

Probably the service generating the most interest is hair extensions. “They are all the rage,” Bobbi says. “I bet I do two to three a week.” She used a HaloCouture product to create Connie’s combination updo/high-ponytail for the cover shoot. It blended so well that it was difficult to differentiate Connie’s hair from the extensions.

As for makeup, the dewy, glossy, sun-kissed look is in vogue.

Bobbi’s career path, which began in Manheim, has taken her to Philadelphia, New York, Los Angeles and back home again.