What better place to vacation than in the state whose official slogan is “Vacationland”?

Since my July column featured a staycation theme, I figured a proper follow-up would entail a visit to a favorite out-of-state destination – Boothbay Harbor, Maine. My wife and I have visited the region several times, the last being more than 10 years ago. As Mainers would say, I thought it was “right time” I make a return visit.

I have a special place in my heart for Maine; it’s where I first discovered craft beer (then it was called microbrew) many moons ago while living in the foothills of the western part of the state. Since moving back to PA in 2003, the number of craft breweries in Vacationland has quadrupled, so I was primed for a return! 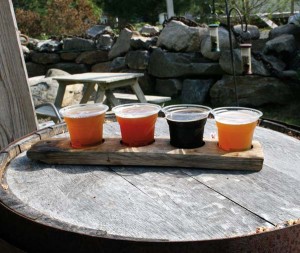 The flight of craft beers at Boothbay Craft Brewery provided a taste of local life, as the name of each beer relates to the area.

As a beer fanatic, my first stop in this rocky, forested, coastal setting was Boothbay Craft Brewery, home of “imperial attitude ales.” Weary from 10 traffic-filled hours on the road, I was excited to pull into the dusty driveway that leads to the industrial brewery and its rustic pub. Being a sunny, less-than-humid day, we opted to forego the wilderness-inspired seating indoors and settled into the courtyard with a few other families. A toddler and his sibling rolled bocce balls in the dirt court. A rooster strolled among the tables.

After a brief look at the beer list, I opted for a flight of the brewery’s regular offerings: 633 American pale ale, Black Rocks stout, Dexter “Rippa” red IPA, and Ken Brown ale. The names relate to the area. Boothbay’s phone exchange is 633. Ledges on the nearby Sheepscot River carry the name of Black Rocks. The Dexter, locally called the “rippa,” is a wooden-handled knife found on most commercial fishing vessels. The brown ale was created to honor Brown’s Wharf, a family operated, harbor-front inn. By the way, the 633 was, by far, my favorite.

Not quite ready for a full meal, we ordered a selection of in-house, wood-fired breads made from the brewing process’s spent grains. To complement the bread, we opted for the Farmers Charcuterie & Artisanal Cheese board, a chef’s choice of handcrafted meats and local cheeses from Dragonfly Cove Goat Farm. “Eat Local & Collaborate. It’s what we do,” reads the menu.

We headed out of the town of Boothbay and, after a two-mile drive, entered Boothbay Harbor. The winding streets speckled with quaint specialty shops and tourist haunts opened to the cool scent of the Bay of Maine, where a myriad of fishing boats dots the quiet water. We rounded the shoreline in search of Cap’n Fish’s Waterfront Inn.

Cap’n Fish’s is an affordable setting in a town where amenities are not necessarily cheap. Luxury accommodations and the quaint B&B can be found anywhere around, but Cap’n Fish’s offered a room with a view and a discount for its whale-watching tours. Our room was clean but expectedly dated; the staff was accommodating and friendly. While our harborside room overlooked most of the parking lot, it nonetheless provided us with a view of the entire harbor – from the Tugboat Inn restaurant to the pier nearest us where the lobstermen awake early to gather the prize of the bay.

That evening we walked across the footbridge and into the heart of “downtown” Boothbay Harbor. The 1,000-foot, circa-1900 bridge connects the bay’s two sides and simply saves walkers about a half mile of travel (plus it cuts down on auto traffic in an area with limited parking). Another bonus: Walking helps shed any unwanted calories that come courtesy of the opulent eating that’s available in coastal Maine. Speaking of which, I found a few places I would highly recommend.

Definitely get the calamari at McSeagull’s; it’s fresh, flash-fried and crispy, yet delicate. (My mouth is watering as I write.) We first stepped into McSeagull’s to wait out a brief storm that blew in from New York one afternoon. We quickly became well-accustomed to this place after taking a seat at the bar (if any, this qualifies as Boothbay Harbor’s “local’s place”). Our bartender Gigi treated us like old friends as we made new conversation with fellow travelers up from Massachusetts. Here we drank beers from Peak Organic Brewing Company out of Portland.

Right next to McSeagull’s is Mine Oyster Raw Bar. We dove into bivalves from Glidden Point Oyster Company and sampled poutine; traditionally a Canadian dish, poutine is one of my favorite snacks – a pile of fresh-cut fries smothered in beef gravy and melting cheese curds. We paired the savory and salty eats with Shipyard Brewing Company’s flagship Export ale.

Back on the other side of the bay, we stopped for a sunset cocktail on the water at the Rocktide Inn’s On the Rocks Lounge. I quickly fell in love with this contemporary-styled eatery and its modern cocktail menu. Here, while basking in the open air on the Sea Deck, the sun slowly crept behind the townscape of Boothbay Harbor as we sipped Blueberry mojitos made from fresh, local ingredients.

On the water at Cap’n Fish’s sits a seemingly traditional coastal bar, Cod’s Head Fish House & BBQ, which sounds and looks like it could easily be a dive bar. We found the exact opposite when we visited for breakfast on our final day in Boothbay Harbor. I had the Smoky Hash, which during my visit consisted of smoked brisket, potatoes, peppers, onions, tomatoes, garlic and two poached eggs covered in Hollandaise sauce. All other breakfast establishments have officially been put on notice!

Our three days in Boothbay seemed to last forever, but ultimately our stay ended. Yes, I ate my fair share of lobster, but I assume you figured as much. It had been 10 years since I was last in Maine. I can guarantee it will surely not be another 10 before I’m back again. 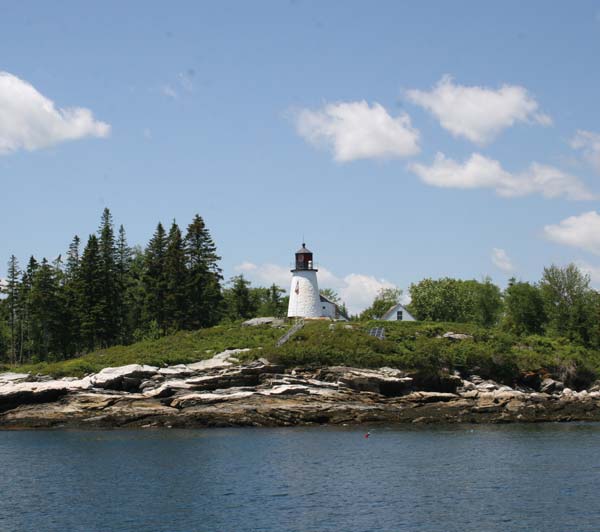 Built in 1821, Burnt Island lighthouse in Boothbay Harbor is one of the most recognizable lighthouses in Maine.