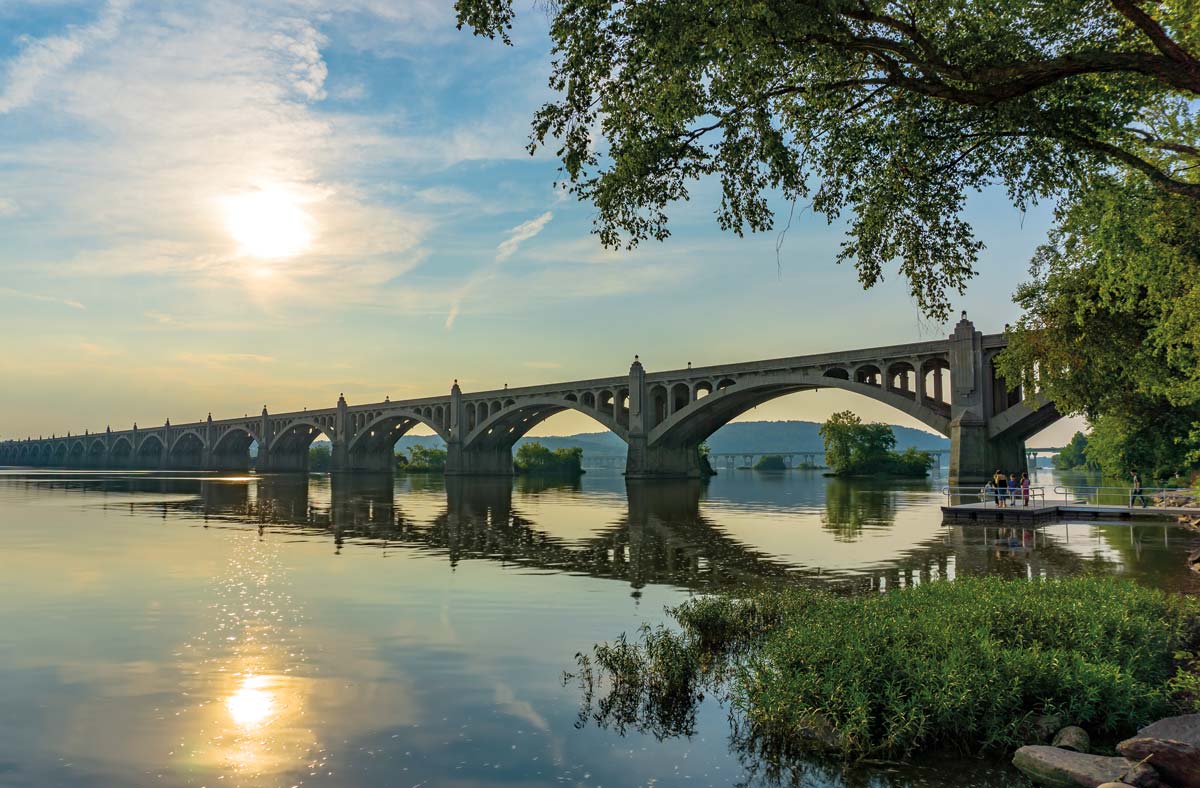 There’s something exhilarating about walking across a bridge. Residents of Columbia and Wrightsville can take advantage of that unique opportunity and walk, run or bike across the mile-long Veterans Memorial Bridge that spans the Susquehanna on a regular basis. This month, gridlock will occur on the bridge when thousands of visitors turn out for the annual Bridge Bust arts-and-crafts event.

Commonly referred to as the Columbia-Wrightsville Bridge, it is listed on the National Register of Historic Places and is also a Historic Civil Engineering Landmark. Construction of the concrete-and-steel bridge began in 1929 and was completed a year later. Originally named the Lancaster-York Intercounty Bridge, its closure was imminent when the Wright’s Ferry Bridge (Route 30) was completed in the 70s. But citizens of the river towns made their displeasure known, and thus the bridge was saved. It was renamed and officially dedicated on November 11, 1980.

The veterans memorial bridge is the fifth bridge to span the river in this area. The first bridge was completed on December 5, 1814, and was heralded as the world’s longest covered bridge. It was destroyed by severe winter weather and ice on February 5, 1832.

A second “world’s longest” covered bridge was completed in 1834. It differed from the first in that it eventually carried steam locomotives, which were pulled by teams of mules to reduce the potential for fire. However, steam locomotives were not the cause of the fire that ultimately destroyed the bridge. Instead, area residents and Pennsylvania militiamen lit the fateful fire on the night of June 28, 1863, sparing Lancaster County from advancing Confederate forces and thwarting General Robert E. Lee’s goal of attacking Harrisburg. A few days later, the Battle of Gettysburg was waged.

Construction of a third bridge began in 1868. The wood, stone and steel structure was destroyed by a hurricane in 1896.

Iron was used to build the Pennsylvania Railroad Iron Bridge (1897). While it was resistant to nature’s fury, traffic jams occurred as a result of locomotives and automobiles having to share it. (Rail traffic continued to use it until 1958, after which time it was razed and sold for scrap.)

The Bridge Bust will be held October 3, 8 a.m.-4 p.m. (rain/shine). More than 300 vendors will line the bridge, selling art, crafts, antiques, food and more. For details, visit parivertowns.com or call 684-5249. I hope to see you there, as I will be leading a photowalk around the bridge and in downtown Columbia that day.