Almost any Sailor or Marine aboard the amphibious assault ship USS Iwo Jima (LHD 7) will admit that the hardest part of a deployment is being away from their family. As service members, they have chosen to serve their country despite the fact that it puts oceans between them and their loved ones. In one unique case, two brothers aboard Iwo Jima have been deployed together, despite the fact that they are from two different commands and two different services.

Jon and Chris Hemler are brothers from Lancaster. They are currently serving aboard Iwo Jima on a scheduled seven-month deployment to the U.S. 6th and 5th Fleet areas of operation. Jon, a lieutenant junior grade, is a Navy pilot assigned to a detachment from Helicopter Sea Combat Squadron (HSC) 28, Norfolk, Virginia. Chris, a first lieutenant in the Marine Corps assigned to the 24th Marine Expeditionary Unit, is the assistant officer in charge of a detachment from Marine Air Support Squadron 1, Marine Corps Air Station Cherry Point, North Carolina.

“We were both really surprised when we discovered we would be deploying together on Iwo. I mean … what are the odds of that happening?” asks Jon, the elder of the two. “We are in such different pipelines, the odds seemed really small. It was pretty shocking,” agrees Chris. The Hemler brothers, born only 13 months apart, have been able to spend their birthdays together on this deployment, and Chris was able to attend Jon’s promotion ceremony that was held in June.
Their wives and family were equally surprised by the news. Their mother, Audrey Hemler, says, “My understanding was that siblings would not be deployed together. Many times ‘understandings’ are not correct. My immediate reaction was that I would not want them to be deployed together because of the fear of them both being in dangerous situations at the same time and being away from us and their wives at the same time. After processing the idea, I thought that it would be a blessing for them. They would be able to support and be there for each other as they have for many times in their lives.”

As predicted, it has turned out to be quite a blessing not only for Jon and Chris, but also for Sailors and Marines who never would have “blended” without these two as a sort of catalyst. “I hate to sound cliché but our relationship as brothers has kind of helped bring the blue and green together. We have made friends with each other’s friends and interacted with people who we wouldn’t have otherwise interacted with,” Chris notes. The wardroom aboard a deployed amphibious assault ship has the tendency to mimic a high school cafeteria. Navy officers associate with those of their own warfare community, and the Marines do the same. It typically takes pre-existing relationships for that trend to be bucked, which is exactly what the Hemlers have done.

Jon made the decision to attend the U.S. Naval Academy while in high school. After a year of preparatory school, he joined the class of 2011. Chris did not attend the academy right after high school. But after visiting the academy during his brother’s Plebe Parent Weekend, just before heading to Pennsylvania State University to start his freshmen year on a Navy ROTC scholarship, Chris decided he would like to apply to the academy. He finished his first year at PSU and transferred to the academy, putting him a year behind his brother.

The Hemler brothers represent the matchless strength and value of the Navy and Marine Corps team aboard Iwo Jima, which is the flagship for the Amphibious Ready Group and, with the embarked 24th Marine Expeditionary Unit, provides a versatile, sea-based expeditionary force that can be tailored to a variety of missions in the U. S. 5th Fleet area of operations. 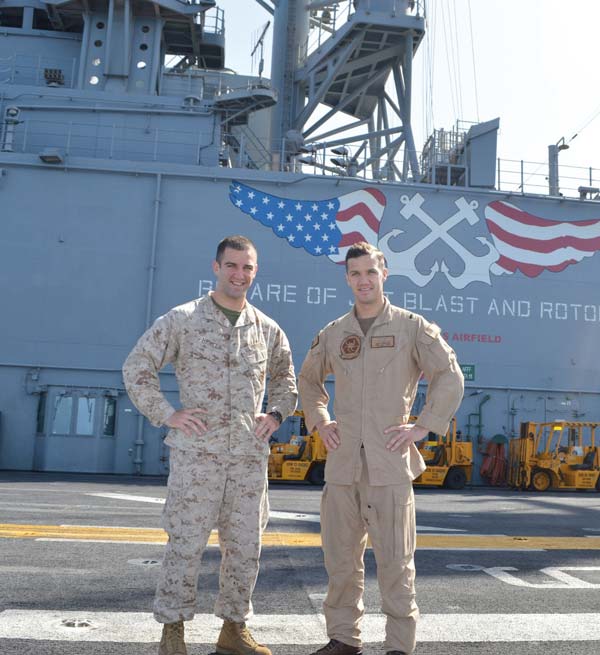