As a child, scampering through the Peppermint Forest, climbing the Gumdrop Mountains and ending up mired in the Molasses Swamp – courtesy of the board game Candy Land – was as close as I came to building a gingerbread house. Last December, I set out to take a closer look at the storybook charm of these edible art forms. 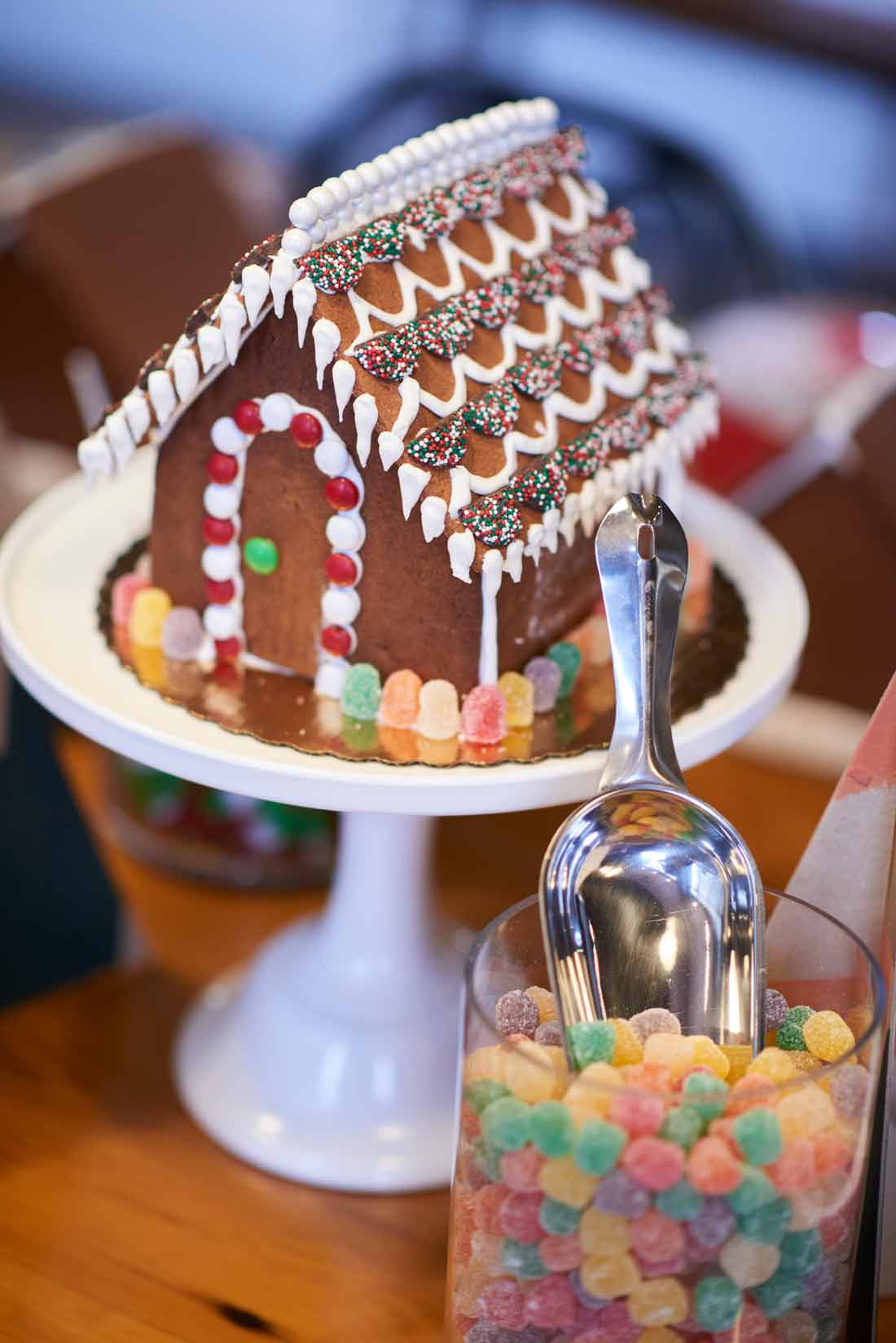 Perhaps the earliest, popularized use of gingerbread houses is found in the published works of the Brothers Grimm. Jacob and Wilhelm Grimm, who were regarded as some of the most influential academics, philologists and cultural researchers of the 19th century, were deeply interested in the folktales and folk music of their native Germany. Recognizing that the treasured folktales – which spanned untold generations – were in danger of being lost to the progression of time, the brothers spent their lives interviewing people who knew of such tales and recording them for posterity.

Because of the Grimms, tales such as Little Red Riding Hood, Snow White, Cinderella, The Frog Prince, Rapunzel and, of course, Hansel and Gretel, live on through Grimm’s Fairy Tales, first published in 1812. The tales originally contained adult subject matter but over time, their unsavory parts were eliminated in order to make them child-friendly. By the time of its seventh printing in 1859, the year Wilhelm died, the tome included more than 200 folk/fairy tales.

As for Candy Land, credit for the beloved board game goes to Eleanor Abbott, who developed its concept while she recovered from polio in 1948. The prototype for the game was then tested among children who were recovering from polio at a hospital in San Diego, California. The game proved so popular that Abbott was encouraged to contact the Milton Bradley Company, whose main product at the time was school supplies. Milton Bradley introduced the game in time for Christmas 1949 and the rest is history. Owned by Hasbro since 1984, Candy Land has undergone several “makeovers” and is now considered a brand of its own. It is estimated that 1 million games are sold annually. 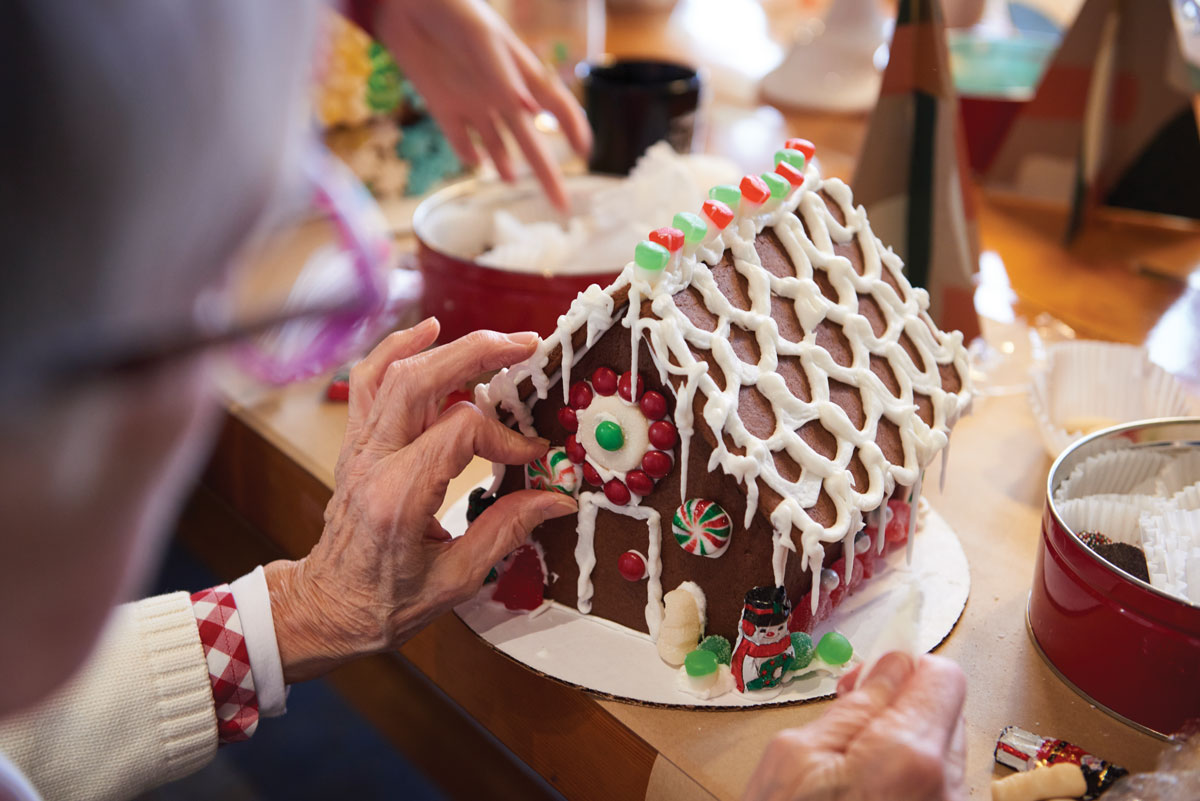 In a tale more akin to Halloween than Christmas, Hansel and Gretel portrays two children who are lost in the woods and are lured into a house made of gingerbread and sweet confections by a witch/cannibal with sinister motives. Gretel wisely outwits the witch and kills her. The two take the witch’s jewels and return home to their father whose wife (their stepmother) has disappeared.

Gingerbread existed well before the Brothers Grimm influence took hold. Ginger root was first cultivated in ancient China, where it was primarily used for medicinal purposes. From there, it traveled to Europe, where it was used to disguise the taste of preserved meat. Henry VIII became a fan of a ginger-based concoction that was thought to ward off the plague.

According to Rhonda Massingham Hart, author of Making Gingerbread Houses, the first-known recipe for gingerbread dates to 2400 B.C. Greece. Like all food, gingerbread developed regional nuances. For example, 13th-century German monks became known for their nutty and citrusy cake that was sweetened with honey and often spiced with anise, cloves, cinnamon, cardamom and, of course, ginger. 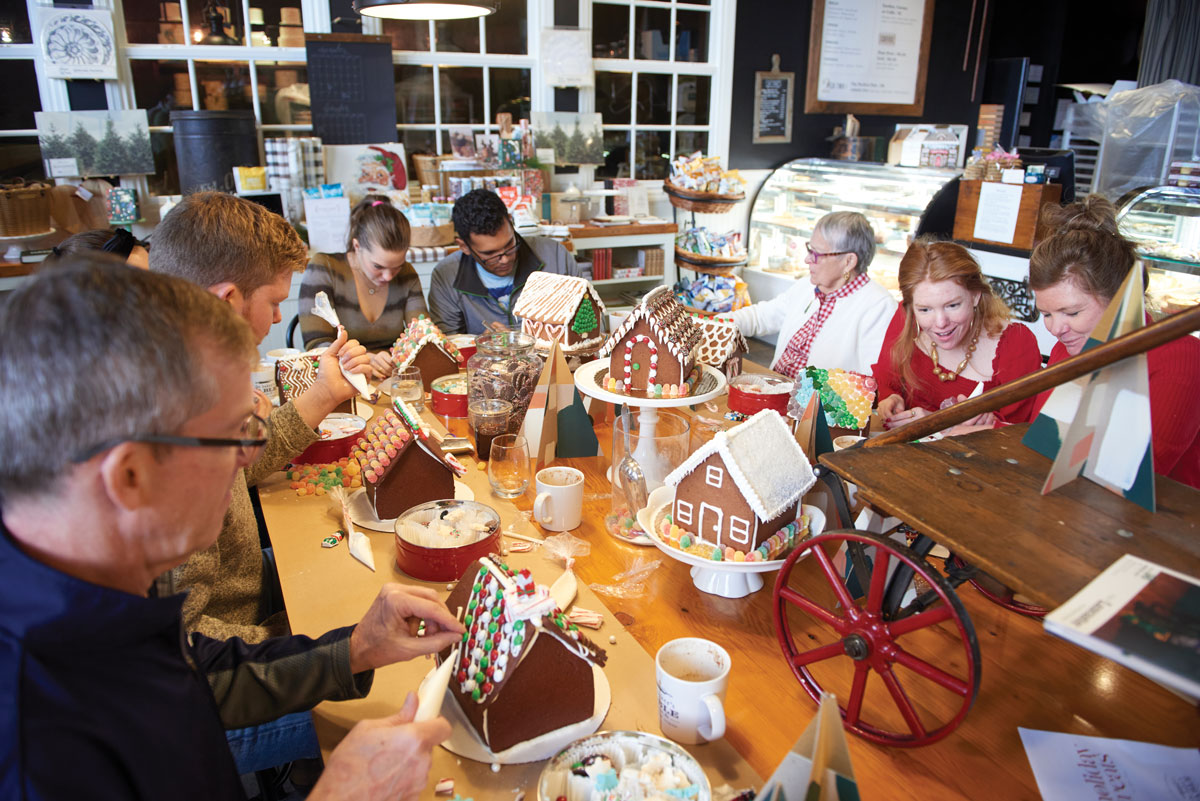 Gingerbread was a favorite treat at Medieval fairs – often called Gingerbread Fairs – held in parts of Europe. Legend has it that Queen Elizabeth I suggested that bakers decorate the various-shaped cookies with gold leaf to make them more delectable. Elaborately decorated gingerbread came to be viewed as the height of elegance in England.

Of course, the arrival of Europeans in America was accompanied by the tradition of making gingerbread. It also regained its “architectural” connection, as the intricate trim that distinguishes Victorian-era homes is referred to as gingerbread.

Every holiday season, The Baker’s Table at the Cork Factory Hotel in Lancaster, offers gingerbread house workshops, where folks gather around the large farmhouse-style table to learn about and create their own works of confectionary art. Attendees are provided all the essentials for sugar-based construction: an assembled gingerbread house on a cake board, piping bags primed with icing, a vast assortment of candies and the ever-crucial cup of hot cocoa, complete with delightful little marshmallows.

Long before learning a cup of cocoa is involved, these workshops had caught my eye; last December, I joined one, along with the family of Linda and Craig Husted. Like me, decorating gingerbread houses was a first for the entire Husted family. “We’re a group of artists, designers and engineers, so the activity was well-suited for us,” says Linda. “We like projects that allow us to make things and be creative.” 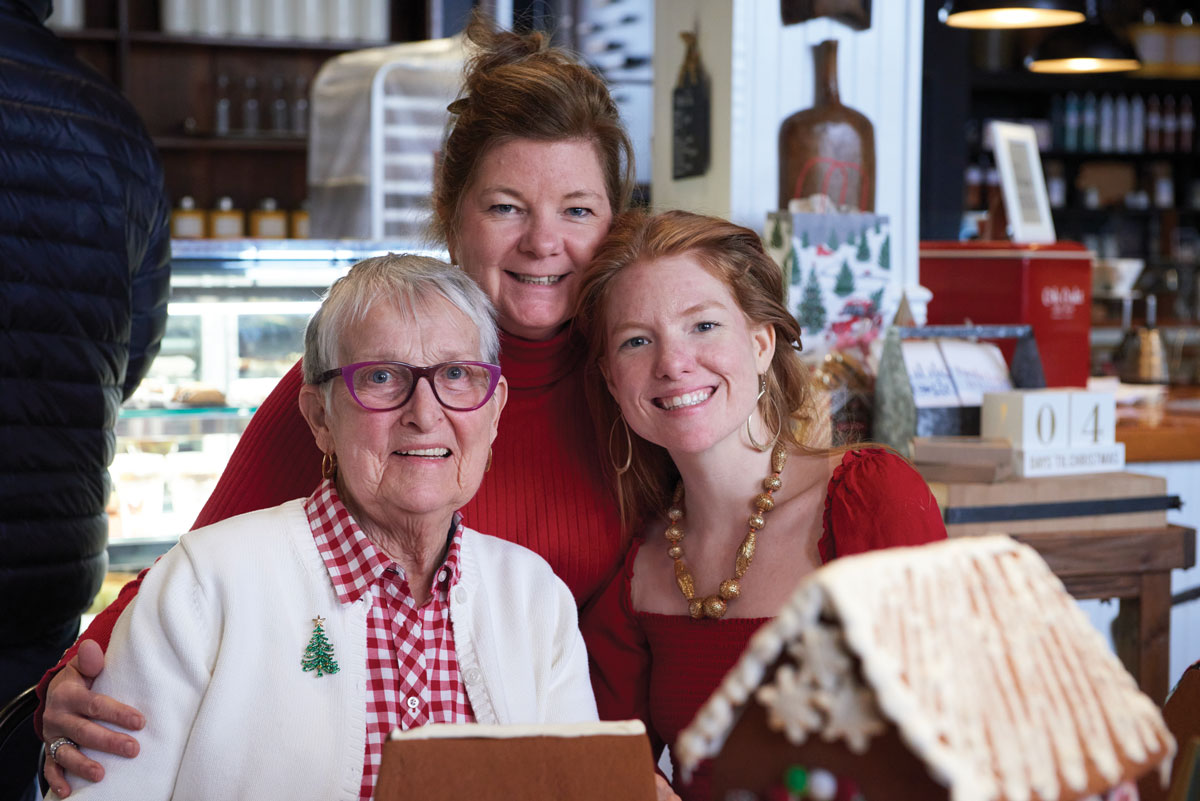 Three generations of Husted women – Barbara, Linda and Morgan – celebrated the season by building gingerbread houses with other family members.

The Husteds’ three children are all young adults who live throughout the United States, and returning home for Christmas, together they elected to attend the workshop. “We loved being together as a dispersed family in the warm environment that The Baker’s Table offers,” says Linda. “The houses and candy provided by The Baker’s Table were overwhelmingly beautiful, adding to our pleasure. I think the process of playing with cookies, candy and the icing is probably as close to a childhood activity that an adult can experience. It was relaxing and just uncomplicated fun in what can be a very busy season,” she says.

Considering that 2020 is the year to stay home and be crafty/creative, this might be the perfect time to create your own gingerbread house. If you plan to bake gingerbread from scratch to “frame” your candy-covered creation, you’ll want to complete all baking and assembly a day in advance, which will provide time for the icing joints to harden. Otherwise, the house may come crashing down under the weight of sugary treats.

Gingerbread recipes of a structural design often call for all-purpose flour, salt, brown sugar, molasses or corn syrup, shortening, baking soda, ginger, nutmeg, cinnamon and cloves. An enameled Dutch oven is a wise choice for mixing, as there is a lot of liquid to heat. (For softer gingerbread, such as cookies intended to be eaten and not used for their strength, butter and vanilla are added.)

The Spruce Eats cites a gingerbread recipe geared entirely for strength, not flavor, but many others exist. Find it at thespruceeats.com/gingerbread-house-dough-recipe-1136139. 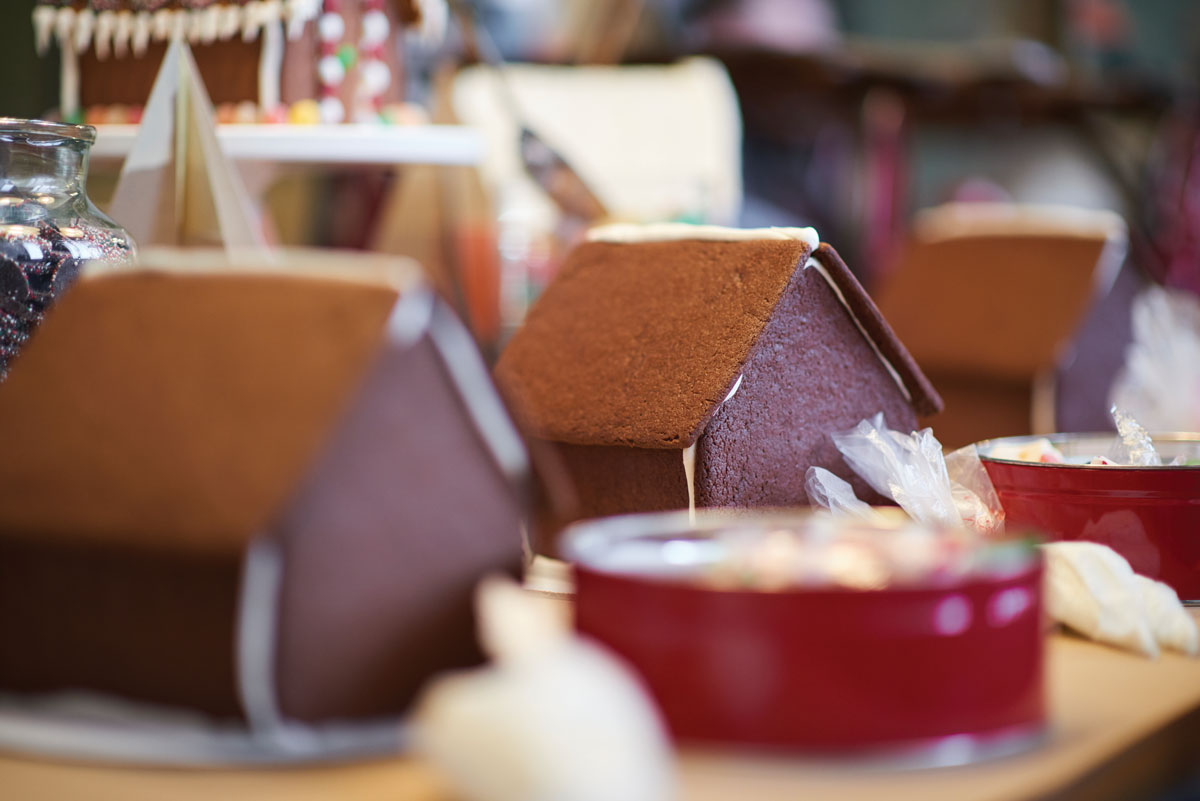 Solidly assembled gingerbread houses await icing and candy decorations. Built a day in advance of decorating, the royal icing that secures gingerbread walls will have time to harden.

In choosing your design, there are oodles of free/printable templates online, as well as silicone molds that can be purchased to help create neat, square pieces. Often, a ruler and sharp paring knife will do well. Detail can be sculpted in the unbaked gingerbread with a tapered spatula or knife for textured detail, such as scalloped siding, shingles or bricks.

When pre-cutting doors and windows in the walls, consider leaving the cutouts in place during the bake to hold the shape of each opening (they’ll need to be recut after or even mid-baking while still hot). Removing door and window pieces while baking makes for curved, less-precise edges out of the oven, which can also be desirable. A Microplane or hand grater can later be used to smooth edges.

For hardcore gingerbread house builders, hard candy can be melted to create beautiful “stained glass” windows. After the gingerbread is baked and windows are removed, place a piece of hard candy in each opening on a baking sheet, bake at 350 degrees for an additional 15 minutes or until the candy is fully melted.

Using a double-boiler method, similarly colored candy can also be melted in a bowl set in boiling water. When liquified, a toothpick can push the candy to the edges of window openings, filling any gaps. Let rest until completely cool and the candy has fully hardened. 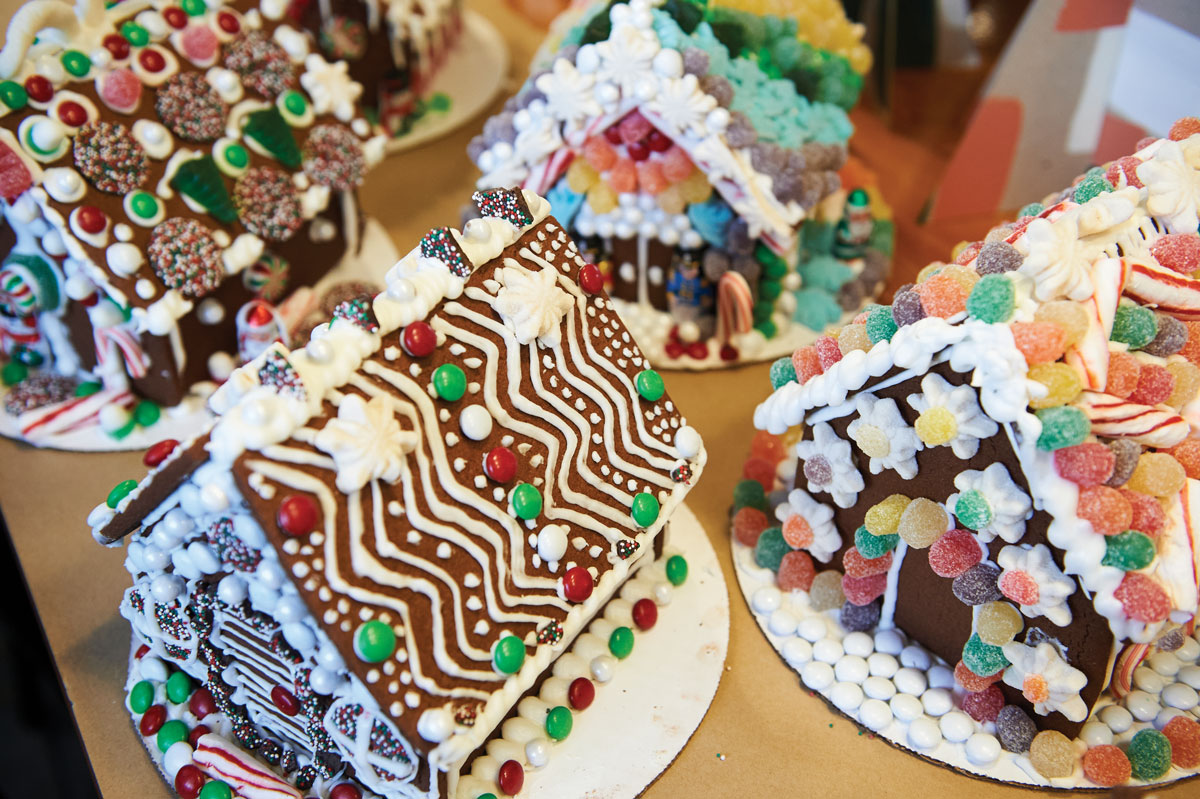 Icing is used as the mortar to build the house structure and to bond candy to gingerbread, so it needs to dry and harden. Royal icing is a definitive choice. To make it, combine 1 pound of sifted confectioners’ sugar, about 1/2 cup or 3-4 egg whites at room temperature and 1/2 teaspoon of cream of tartar. It will take upwards of 10 minutes of mixing until the icing forms stiff peaks. Don’t overdo it – overworked icing will crack and weaken when it dries. If you have a stand mixer, now is the time to use it. When finished, keep the icing covered as it will dry quickly.

To add color to the icing, separate the desired portions into small bowls and mix in paste food coloring with a toothpick. Just be aware that liquid food coloring can turn the icing soupy and wet and it will not set as nicely. 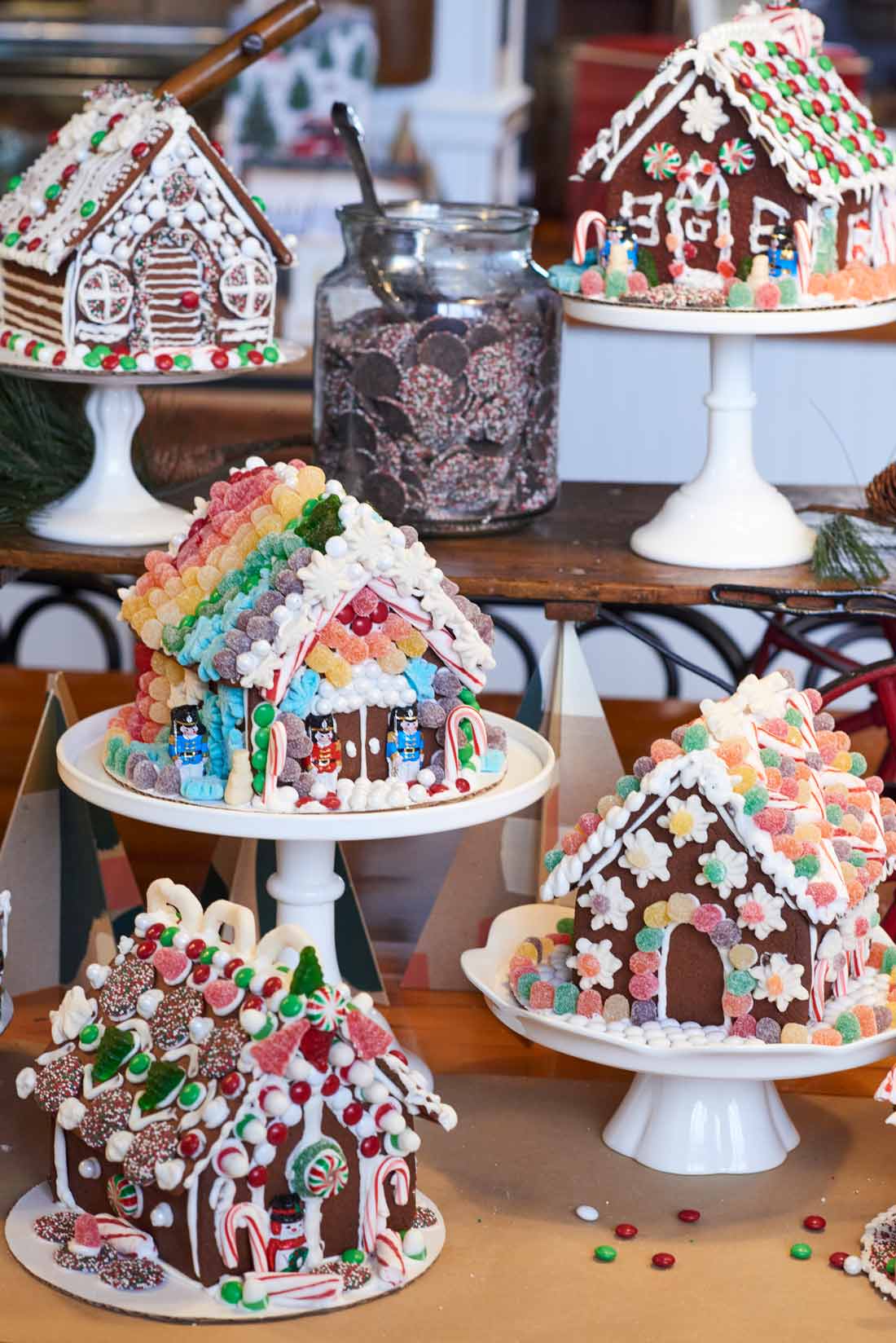 When it comes to piping the icing, the openings of disposable decorating bags can be cut for varying thicknesses. I discovered firsthand that piping bags can explode, deeming paper towels as essential equipment, so make sure not to cut the opening too narrow or squeeze less-viscus icing too hard.

If you have a piping bag with an assortment of threaded tips, commonly sold at craft stores, a door opens to creativity. Iced textures adorn your gingerbread house and its surrounding landscape to create eaves of snow, icicles, snowflakes, green wreaths, red bows and intricate patterns. 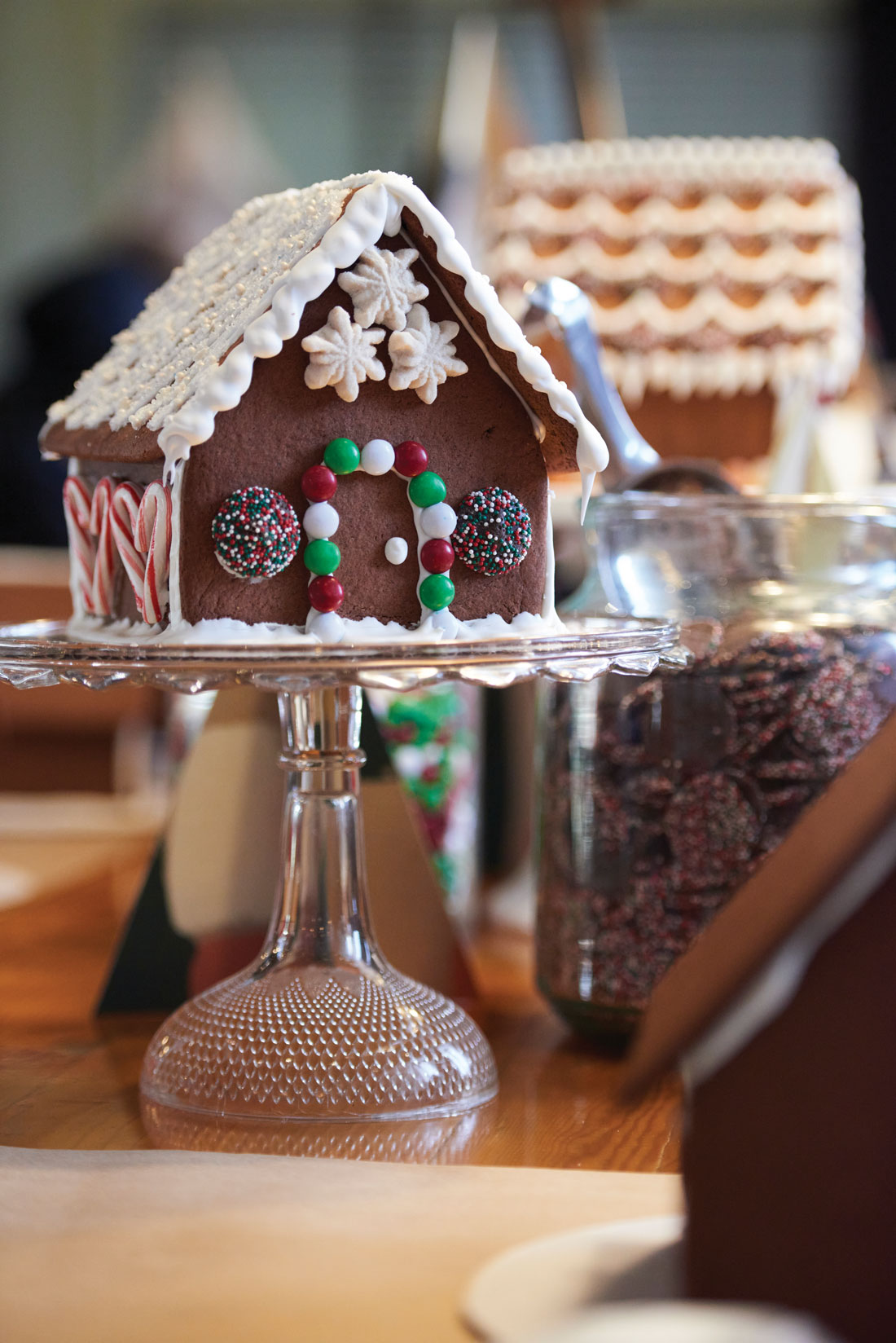 Now, for the best part: candy! The magic of any gingerbread house awaits in the rainbow of blissful candy options. As vast as they are sweet, try not to eat them all during construction! A diverse selection of candy with different colors, sizes, shapes and textures guarantees personality; a creative fantasy will emerge with every design.

For those of you still clinging to leftover Halloween candy that’s now bordering on stale, you might consider taking a more Hansel and Gretel approach. Elements such as licorice and candy corn could create a gingerbread house worthy of Jack Skellington, the stop-motion character from Tim Burton’s The Nightmare Before Christmas.

If your family is going to do the work of baking one gingerbread house, you might as well bake a few and look for candy in bulk. Grocery stores such as Stauffers have many options in their bulk food and candy aisles. Other sources include Candy*ology and Wilbur Chocolate’s retail store (both in Lititz), as well as Miesse Candies & Ice Cream and Sweetish Candy (both in Lancaster). A bit further afield, IKEA has a curious selection of candy at its Swedish Food Market.

During construction, as candy supplies dwindle, particularly of those precious-few pieces having the precise shape and color you need to complete your gingerbread masterpiece, bartering ensues. 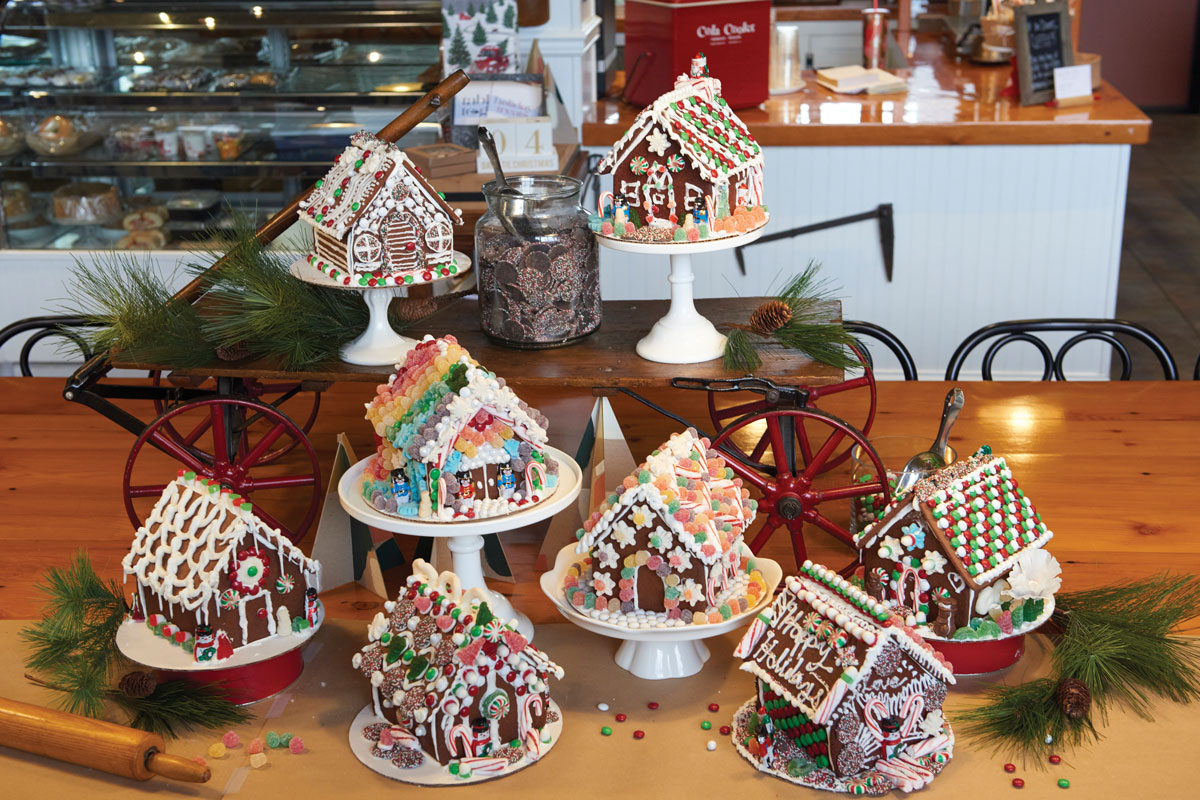 The Husted family’s colorful confectionery creations at The Baker’s Table.

“I wasn’t expecting it to become a competition but when it appeared that everyone was trying to make the most unique version they could of a traditional gingerbread house, it took our enjoyment to another level of fun,” says Linda. “As an activity, we decided to continue the gingerbread competition and have each person present their gingerbread house to the family with an explanation of their design. This became a funny sales-type pitch to win individual family members over and vote for the best gingerbread house.”

When asked about the fate of their cozy gingerbread village, Linda reports, “Our gingerbread houses were displayed in the dining room when we took them home. We continued to nibble at them as we passed by them each day!”

My own gingerbread house met a similar fate. 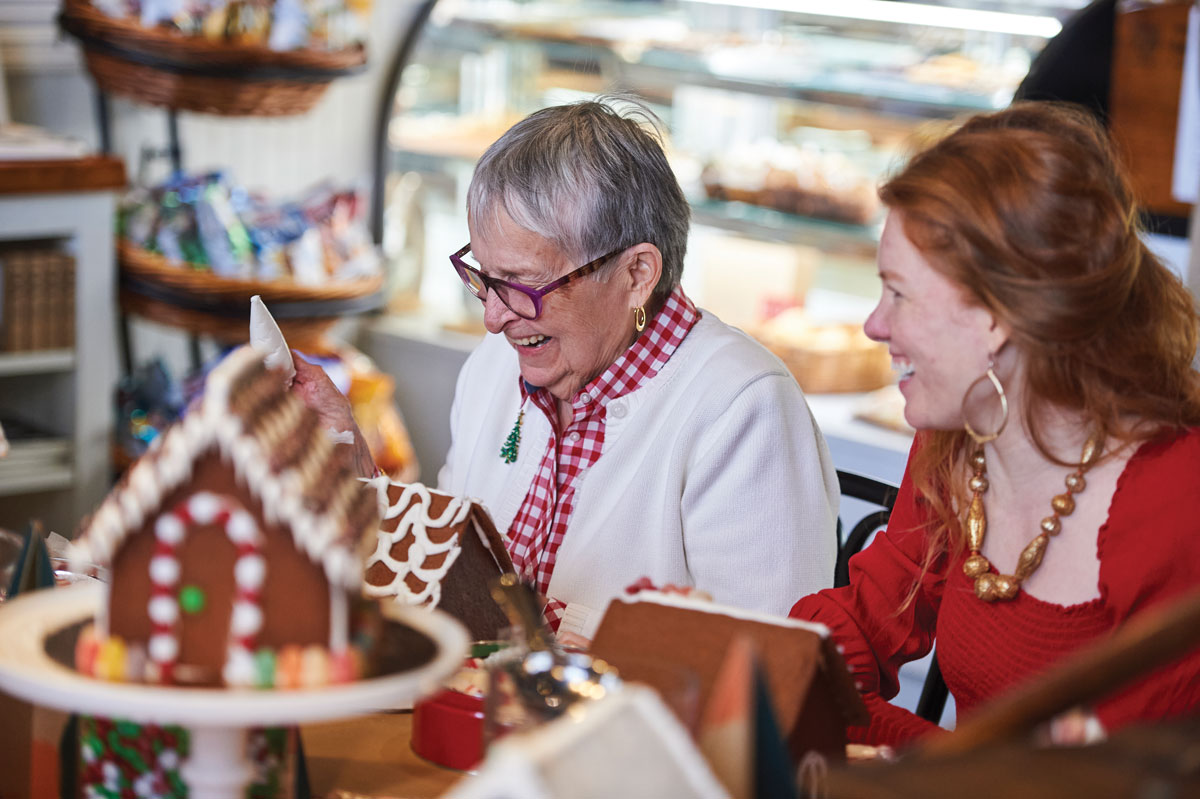 The Husted family’s colorful confectionery creations at The Baker’s Table.