When Jim Pinkerton says he must attend to his “queen bee,” he is not referring to his wife of 30 years, Joanne. He is actually referring to a bee! Jim is one of the thousands of beekeeping enthusiasts in this country who share an interest in apiculture – the keeping of bees!

Jim, who has always loved nature, credits his uncle, a teacher who lived in the Catskills of New York and kept bees (at one point he had several hundred hives), for his almost instantaneous fascination with apiculture.

In 2000, Jim’s uncle retired and moved to Luther Acres in Lititz. He brought six hives with him, relocating two of them to the backyard of Jim’s thriving business in Mount Joy, The Gathering Place. This allowed Jim to have close, daily contact with the hives, plus it allowed him to tap expert help on the part of his uncle. Jim became hooked on beekeeping, admitting, “It’s become my passion.”

Jim became an active member of the Lancaster County Beekeepers Society (LCBS), which was founded in 1876, serving a five-year term as its president. December 2015 marked the end of his tenure, as five years is the maximum amount of time a president may serve. He remains active in the club, still preparing the LCBS newsletter.

Jim names the observation beehive at the North Museum as his favorite accomplishment during his term as president of LCBS. Jim and Dan Chambers (who is another past-president of the club) implemented and continue to maintain the museum’s hive. Dan did the cabinet work and the building of the hive.

In the beginning, they built a shelf outside a window of what is now the Explore Nature Gallery and located a hive on it, which allowed visitors to observe bee activity. This was interesting for a while, but children really couldn’t see the bees working deep inside the hive. So, Jim and Dan went back to work. Today, there is an observation hive inside the museum. The four-framed hive features glass on both sides and a tube that goes from the hive and through the wall to the outside. “You are able to watch the bees come and go and observe the queen laying eggs all the time,” Jim says. He shares that several years ago the hive produced 90 pounds of honey during the month of July alone. It was a banner year for F&M’s Linden trees, which have a scent bees just love.

Jim is also proud of the club’s working hives at Penn State’s College of Agricultural Sciences, Southeast Agricultural Research and Extension Center, which is located near Manheim. More affectionately known by LCBS members as “the farm,” members accepted Penn State’s invitation to install and maintain four hives there.

A Hobby for All Ages

Since it was winter when this interview took place – just days after January’s 31 inches of snow – I was interested in knowing how bees survive a cold, snowy winter. According to Jim, “If you were to open a hive at this time of year, you would see a cluster of bees about the size of a soccer ball, and in the center of this would be the queen.” The movement of all the wings produces heat, thus maintaining the hive at 92 degrees, winter and summer. Essentially, the bees warm the hive in winter and air-condition and dehumidify it in summer.

Life of a Bee

A hive, as a whole, acts as one living organism. Its members work as a self-sustaining unit. The hive’s caste-like society consists of worker bees (all females), drones (males who live only to mate with a queen) and, of course, the queen. The worker bees are multi-taskers (they are female after all), who do all the work in the hive except lay eggs. It’s the worker bees who leave the hive to gather pollen, bringing it back in their “pollen baskets” that are located on their back legs. The queen’s primary role is reproduction or the laying of the eggs.

With the exception of the queen, a bee’s lifespan is about six weeks. A queen may live three to five years, and in that time she lays approximately 2,000 eggs per day. Due to the six-week turnover, the queen must constantly lay eggs in order to replace the dying/dead bees.

All three types of adult bees – drones, workers and queens – pass through three different developmental stages before emerging as adults: egg, larva and pupa. The three stages are collectively labeled as “brood.” While the developmental stages are similar, they differ in duration. Egg to worker is 21 days; egg to drone is 24 days, and egg to queen is 16 days. Unfertilized eggs become drones, while fertilized eggs become either workers or queens.

Bees are very complex. They employ different forms of communication that relate to specific needs within a colony. One such form of communication is “the waggle dance.” Essentially, it’s the manner in which one bee informs other bees where they can find a patch of flowers she has just visited, water sources she has just discovered or how to find a new nest site. Each movement is very specific and literally draws other bees a map of where to go and how to get there. Pheromones emitted by the bees serve as an advanced form of communication and are used in almost every aspect of bee colony life.

A Vital Part of the Ecosystem

Bees, of course, are very important to the world’s ecosystem. As bees gather pollen and nectar that are vital to their survival, they pollinate food crops that are essential to our survival. Albert Einstein is quoted as saying, “If the bee disappeared off the surface of the earth, then man would only have four years left to live.”

Indeed, they are industrious pollinators. Bees need the flowers for food, while the flowers need the bees in order to reproduce. Nectar and pollen are a bee’s only food source. Pollen is protein-rich baby bee food, while nectar supplies adult bees with energy.

A beekeeper must learn to “read” his bees in order to avoid or at least limit the amount of stings he or she receives. “You’ll know by certain signs when not to bother them,” Jim says.  Bees, in turn, can read the mood of the keeper, so a calm, steady approach when working with them is important. Some beekeepers wear a “veil” to protect their face and eyes, while others don whole suits (with gloves) for protection.

Hives must be checked frequently to assess their health and ensure that a queen is present. Beekeeping requires dedication and hard work, but it can yield profits in the long run. “It is one of those few hobbies that can provide support,” Jim notes. Of course, he’s referring to honey, which seems to be a cure-all for whatever ails people these days.  Beeswax for candles is always in demand, as are other bee-related products like royal jelly and propolis (bee glue) that are sold at health food stores. Jim sells his honey locally.

Beekeeping has survived through the centuries, but today, bees are being threatened by a disorder known as Colony Collapse Disorder or CCD. According to Jim, who maintains 30 hives that are spread out in different locations in the Mount Joy area, “One day you have a healthy hive, and the next day you’ll check on it only to find there are no bees, just a few dead ones left behind.” Beekeepers are greatly discouraged by this phenomenon, as it necessitates the repopulating of a hive.

Scientists give no one answer as to why this mysterious disorder exists. Some believe it may be a combination of issues that stress the bees, including toxic sprays, malnutrition (no proper food source available near the hives), extreme weather conditions, electromagnetic radiation from cell towers, mites, viruses, etc. But these are all just theories and despite the development of CCD, beekeeping remains alive and well today, as beekeepers have become experts at employing different ways of replenishing their bees.

Jim doesn’t allow the CCD issue to worry him; he prefers to face the future by being positive and enjoying the challenges involved with his hobby.  “The constant challenges are what make beekeeping fun,” he remarks. 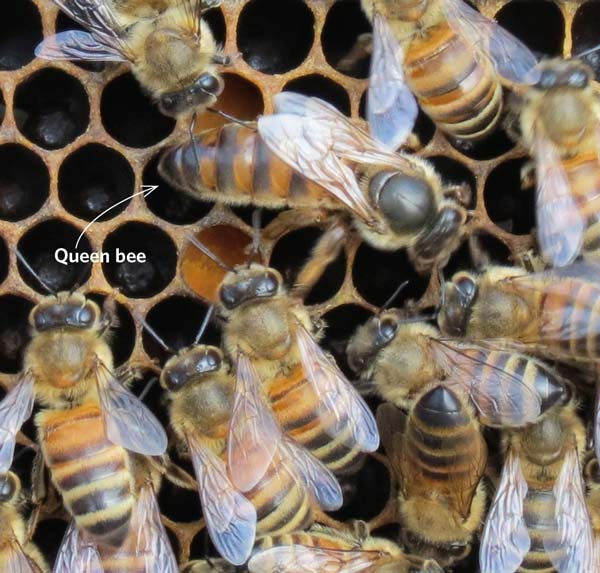