Who hasn’t played Candy Land at some point in their life? For many of us, it represented our introduction to board games. However, it seems Candy Land provides an even deeper link to the world in which we’ve been living for the last 20 months. 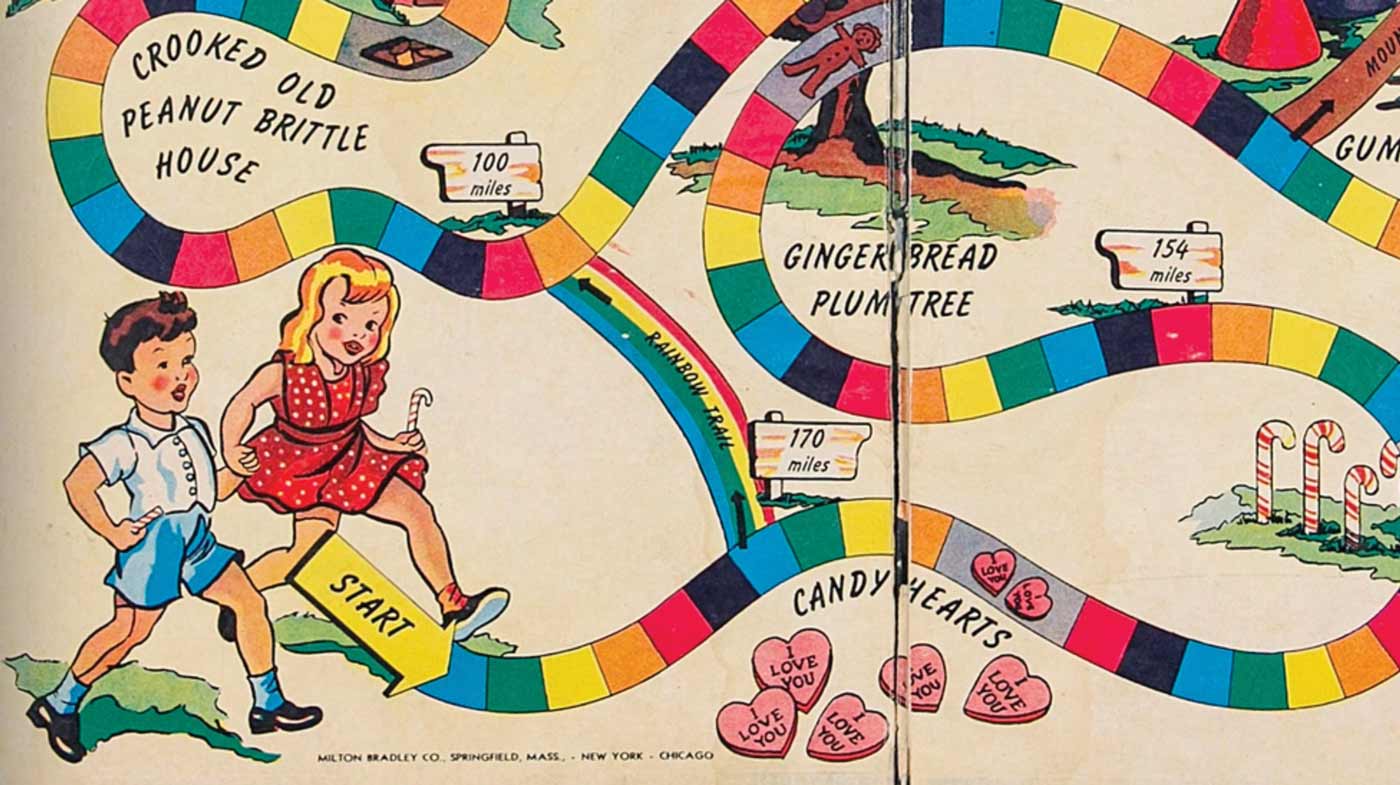 Little did I know that a story about Candy Land-related Christmas decorations would take me down a rabbit hole that relates to the past and the present. It just goes to show that you learn something new every day.

The controversy over Covid vaccines made me think back to the early ’60s. I remember going to a school building with my family on what I recall were a series of Sunday mornings and downing sugar cubes that contained some sort of medicine. I remember the sugar cubes being kind of tasty.

That memory prompted me to ask several of my peers if they recall doing that, as well. All of them recalled the ritual and said it was to receive the polio vaccine, which had been developed by Dr. Jonas Salk and his team at the University of Pittsburgh in 1955. More than 400 million doses were distributed in the United States between 1955 and 1962. The vaccine helped to all but eradicate – there was a 90% reduction in cases – the poliomyelitis virus (or polio as it came to be known) in this country over that time period. Today it stands at 99%, which according to the World Health Organization mirrors statistics worldwide, with only Afghanistan and Pakistan being problematic areas.

The poliomyelitis virus has existed since the dawn of time and has made its presence known in all areas of the world at one time or another. It became especially virulent in the United States during the 20th century, peaking in the ’40s and ’50s, with 1952 being the watershed year with 57,879 cases that resulted in 3,145 deaths. Unfortunately, children were most affected by the virus, which attacks the nerves in the spinal cord, causing paralysis in the legs and lungs. Leg braces and iron lungs were used to combat the damage the virus caused. (The leg braces prompted me to think of the movie Forrest Gump.) One article I read called polio “the most feared disease of the 20th century.” Another depicted it as being a disease that “maimed rather than killed” its victims  – some temporarily, some permanently. As a result, hospitals and sanitariums across the country were filled with children who had contracted the virus. As a kid, I remember hearing people talk about the crippled children’s hospital in Elizabethtown.

Apparently, the parents of that era were relieved that a vaccine had been developed. For some reason, the virus was most active in the summer, which prompted the closure of swimming pools, playgrounds and other recreational areas. Children were kept indoors and away from their playmates. Oddly enough, I don’t remember any of that – the kids in my neighborhood (Nassau Road) all played together and I don’t recall my parents discussing polio.

Franklin D. Roosevelt was a victim of polio, having contracted it in 1921 at the age of 39. The virus left him permanently paralyzed, causing him to use a wheelchair for the rest of his life. As president, he founded the National Institute of Infantile Paralysis whereby a nationwide effort was launched to provide monetary help for the families that were impacted by polio, as well as fund research to find a cure. The campaign kicked off in January 1938, when Roosevelt invited Americans to support the effort by sending dimes to the White House. That month, 2,680,000 dimes ($268,000) flooded the White House’s mail room, doubling the amount Roosevelt had hoped to initially raise. It is estimated that as many as 7 billion dimes had been donated to the cause by the time the vaccine was developed. The effort, which ultimately became known as the March of Dimes, was an unprecedented success that not only aided the victims of polio but it helped to change the face of philanthropy, as the dime project proved that people from all walks of life could make a difference in the lives of others.

Have you ever wondered why Franklin Roosevelt’s image is on a dime? Roosevelt died on April 12, 1945. A few weeks later, Rep. James Hobson Morrison (D-LA) introduced a bill that would create the “Roosevelt Dime” in honor of the president’s role in fighting polio. With the passage of the bill, the Treasury Department began designing the coin. The first Roosevelt Dime was minted on January 19, 1946; the dime was released to the public on January 30, which would have been Roosevelt’s 64th birthday.

That brings us to Candy Land. Eleanor Abbott, a 30-something school teacher, was battling polio in a San Diego hospital in 1948. Surrounded by bored children, she sought to provide them with entertainment through a game she devised that had simple rules and didn’t require counting or strategizing. She theorized that its candy theme would capture the attention and imagination of even the youngest patients. Best of all, it would be time consuming. The children loved Candy Land.

Friends encouraged Abbott to contact the Milton Bradley Company. The company purchased the rights to the game and had it on store shelves in time for Christmas 1949. The first games included artwork on the board that depicted a boy and girl running happily in the fresh air. The boy wore a brace on one of his legs.

Candy Land, which was inducted into the National Toy Hall of Fame in 2005, is now owned by Hasbro. In addition to the traditional board game format, it is available digitally and can be played on a computer or phone. To this day, 1 million Candy Land games are sold annually in various formats.

As for Eleanor Abbott, she led a life of relative obscurity after leaving the hospital and resided with her sister in the San Diego area until her death in 1988. Legend holds that she donated all the royalties she received from Candy Land to children’s charities.