The strong hands that once raised beef cattle, tended to chickens and plowed fields have retired from farm life. Now, those same hands belong to an accomplished carver of birds and waterfowl.

Harold Buckwalter got a late start at carving. It was not until 13 years ago – at the age of 70 – that he retired from farming and decided he would pursue something that had always fascinated him: carving.

There has always been an artistic side to Harold; his first high school woodshop class prompted him to become a life-long woodworker. The first piece of furniture he made is the grandfather clock that sits in a corner of his living room. Dolores, his wife of 61 years, points out that Harold made most of the wood furniture you see in their home, as well as the kitchen cabinets and natural wood floors. Harold notes that woodworking runs in the family, as four of his brothers are cabinet makers.

Not long after Harold retired from farming, he met Frank King, who just happened to be a carver. Knowing Harold had an interest in woodcarving, Frank offered to take him under his wing and provide him with lessons. Harold took him up on his offer. The lessons only whetted Harold’s appetite for learning more about his new hobby. So, he turned to world-renowned waterfowl carver, Jim Sprankle.

Jim, who lives in Sanibel, Florida, provided Harold with lessons in fine-art carving. In Jim’s estimation, the secret to a good piece is in the details. When Harold first met Jim at his home, he remembers seeing a large, impressive carving of an eagle with its wings outstretched and both feet perched atop a globe of the world. This piece was soon to become famously known as “Freedom Fighter.” The carving was destined for the White House as a gift for President George W. Bush. Harold was impressed with Jim from the get-go, and he reports that their friendship continues today.

The Buckwalter farm near Lititz is home to a long white building that was once a chicken house. A portion of it now serves as Harold’s woodshop. The building also houses a smaller area that’s dedicated to carving. Here, Harold whittles away the hours, working at what he loves best these days. His carving workshop is equippped with all the necessary tools that aid him in creating his works of art that take the form of cardinals, blue jays, kingfishers, western tanagers, green-winged teals, blue-winged teals, herons, Canadian geese, common mergansers, shovelers, owls and more. His “studio” and the sunroom in the house that overlooks the backyard and adjacent fields are filled with books and magazines that relate to birds. He also loves to spend time in Montana, where he “hunts” birds with his trusty binoculars and camera.

His carvings begin with a simple block of tupelo wood, which he calls “Louisiana swamp wood.” “I love working with tupelo,” he says, explaining that it’s a good choice for working with power tools. “It does not fuzz up like other woods.” Harold prefers power tools (using varied burs and bits) over hand tools, as they allow him to strive for greater and smoother detail on each bird.

It takes tremendous artistic ability to capture the exactness of the feather layout on each bird due to the fact that each row of feathers may have a different appearance and lay in a different direction. This is when a “study caste” or “mold” comes in handy. Sometimes it helps to study a picture as it gives the carver an idea of what is necessary to achieve the individual detail required. It is up to the artist to take all that one step further, adding his own take on what is needed to complete the piece.

Harold maintains that the painting process is what makes the piece a true work of art. “You must be as good a painter as you are a carver,” he says. He employs acrylic paint thinned almost to the consistency of water, sometimes using up to eight coats to get the look he wants. He uses a wet-blending technique that allows for a smooth transition of color from dark to light. “I want my birds to have a soft, natural look,” he notes. Attention to detail and accuracy are important to him.

How the finished bird is displayed is almost as important as the carved bird itself. Harold is constantly on the lookout for interesting pieces of wood and tree limbs for his birds to perch on.

He gives credit to God for his ability and patience. He’s also thankful for the peace he derives from his work. “I just love being in my workshop,” he shares. “I like to lean back in my chair sometimes and just look out at my big beautiful oak tree and relax.” 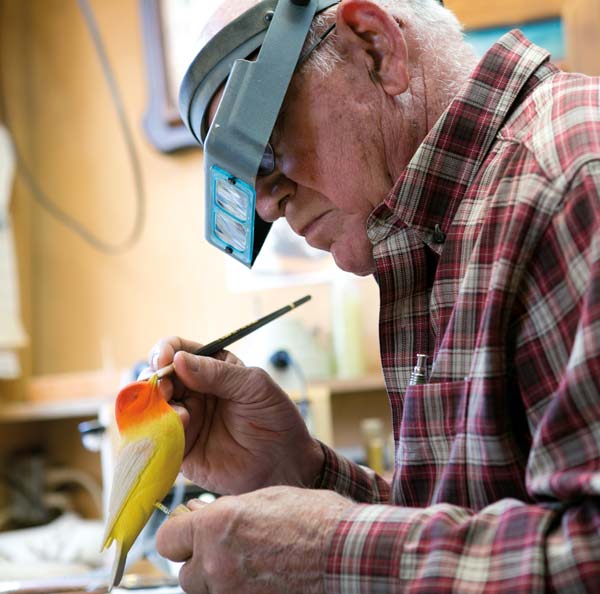 Harold painstakingly applies layers of paint and uses a wet-blending technique to bring his birds to life.