The Railroad House Inn’s elegant Victorian exterior only hints at the dining experience that awaits inside.

Listed on the National Register of Historic Places, the inn was built over a three-year period from 1820-1823. As a canal hotel, it was a haven for Susquehanna rivermen. During the late 1800s, The Railroad House, under the proprietorship of Col. Thomas Scott, enjoyed its heyday as a railroad hotel when the Pennsylvania Railroad built a passenger and freight station on South Perry Street. In the latter part of the 20th century, the Railroad House served as a bed-and-breakfast and restaurant (off and on) for a number of years.

Its proximity to the Susquehanna River accounts for the fact that the property has sustained damage from a number of floods, the latest being Tropical Storm Lee in 2011. Fortunately, the property’s various owners over the past 40 years have served as stewards of the historic property – undertaking renovations of the restaurant, garden and 12 guest rooms.

Current owners Joey Bowden, the former manager of the Bull’s Head Pub in Lititz, with over 22 years in the restaurant business, and Freddy States, co-owner of the nearby McCleary’s Pub, re-opened the restaurant 18 months ago after flood cleanup and renovations were completed.

In doing so, they also changed the restaurant’s focus, transforming it into a casual fine dining venue, while the Perry Street Cellar, located in the lower level of the building, delivers more of a pub feel. “People are more into casual dining than traditional fine dining,” Joey points out. “Perry Street Cellar is definitely relaxed and casual, while upstairs, we combine fine dining fare with a more casual feel,” he explains.

The Railroad House seats 75 in its three dining areas, plus 35 on an outdoor patio. Each dining area has its own atmosphere.

The parlor bar, which combines hints of modern elegance with Victorian charm, is home to a beautiful fireplace, shining hardwood floors, a wide bar and hi-top tables. The main dining room combines casual with a bit of  steampunk. Seating is a combination of booths and tables. Although one of the dining tables is in the center of the room, there’s privacy as guests step up into a semi-enclosed booth – Bowden describes this particular space as having a hint of steampunk.

Known as the Brodbeck Room for the sign that hangs above the fireplace, the third dining area offers more of a traditional Colonial feel. Exposed beams, a cooking hearth, lighting fixtures and furnishings all contribute to the atmosphere. “This area also can accommodate private parties,” Joey notes.

The Perry Street Cellar, which opened in September 2015, has its own entrance off Perry Street. Exposed stone walls and rafters, subdued lighting, and a long copper bar are the key elements of this pub. Live entertainment is offered most Saturdays. The focus of the menu is pub fare and craft beer.  Twelve draft lines feature a rotating selection of both rare beer and beer from up-and-coming crafters. There’s also a selection of bottled beer. “We know that not everyone is into craft beer, so we do offer some standards. Our staff is also well-versed in beer, so we often offer suggestions; if a customer likes Yuengling, we’ll offer a sample of something similar,” he explains.

Beer dinners are held the second Wednesday of the month. The beers that are offered at the dinners correspond with the pub’s seasonal menu offerings.

Menu offerings at both the Railroad House and Perry Street Cellar focus on fresh, local ingredients and change seasonally to reflect those offerings. Joey reports that the restaurant works with Lehman Farms in Wrightsville, while grass-fed beef is obtained from Drager Farms in Marietta. Other local ingredients are obtained at Lancaster Central Market. “The menu focuses on quality food. Part of our mission is to find and support local businesses, whether it’s a craft brewer or a farmer,” he states.

Joey points out that although the menu does change seasonally, some items remain constant such as burgers and tacos in Perry Street Cellar, but the presentation changes. He estimates that about 30% of the pub menu changes in some fashion seasonally, while nearly 80% of the Railroad House menu switches up.

There’s also a Sunday brunch. “Brunch has become really popular. With the opening of the new section of the Northwest River Trail last year, we’ve had more people who are walking the trail stop in for brunch,” he says.

Valentine’s day is on a tuesday this year, and although the Railroad House is typically closed that day, it will be open on February 14. A special menu of appetizers, entrées and, of course, some delectable chocolate desserts will be offered. 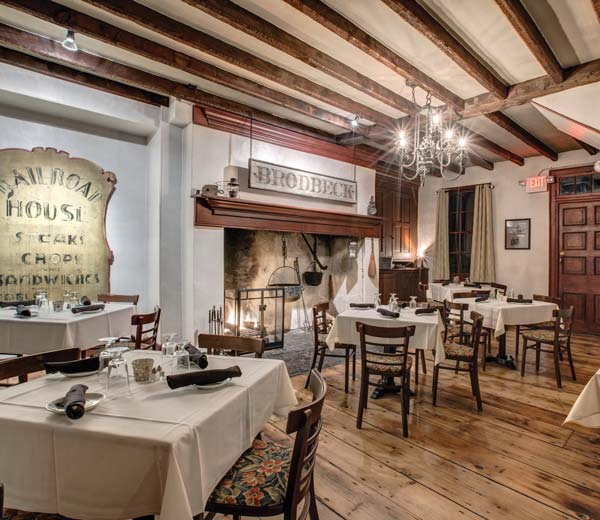 Fans of Colonial styling will love the Brodbeck Room.