The culture, cuisine and libations of Mexico take center stage on May 5, Cinco de Mayo, when the Battle of Puebla – the Mexican militia’s victory over the French Army – is commemorated. Once a day of celebration in the state of Puebla, Cinco de Mayo has been embraced in the United States, especially in cities that boast citizens of Mexican descent.

El Serrano has become a hallmark in the Lancaster dining scene since opening more than two decades ago. A major addition six or seven years ago helped to expand owner Manuel Torres’ vision of bringing a wide-ranging taste of Latin America
and Peru to the area.

In Mexico, the serrano pepper, which originated in the state of Puebla, is a much-used cooking ingredient. In Peru, serrano translates as “Men of the Andes.” In Lancaster, El Serrano is consistently voted as the best restaurant to experience Mexican/Latin American cuisine by the readers of this magazine.

El Serrano now houses three dining venues in one location – El Serrano, specializing in Latin American cuisine; Clementinas, a private dining venue; and Culturas, a tapas restaurant. There’s also a courtyard for al fresco dining; a chef’s table located in a cozy nook off the second-floor kitchen (reservation only); a lower-level wine cellar for the restaurant’s wine classes; and a newly renovated tapas bar adjacent to Culturas on the second level. In addition, El Serrano offers areas for private parties, including a lofty space on the third level that also plays host to monthly food and wine pairings, as well as the periodic tequila and Scotch/cigar dinners. Manuel describes these special dinners as being both fun and educational.

While each dining venue has a distinct flavor, the décor – tiles, chairs, tables, light fixtures and other metal work – are all handcrafted in Manuel’s native Peru. And like the exterior, which resembles a Spanish hacienda, the interior reflects his vision and painstaking attention to detail. “I want guests to feel like they’ve been transported to Peru,” he says. He points out that El Serrano’s bar is just one example of Peruvian craftsmanship – the top is mahogany and the castings on the bronze bar front tell the story of the Incas and the Spanish Conquistadores.

Located on the main level, El Serrano’s original restaurant focuses on Latin American cuisine. Dining alcoves along one wall provide an intimate, cozy setting for parties of two or four. Menu items include appetizers such as Ceviche and Fish Tacos; an array of salads; such favorites as fajitas, chimichangas and enchiladas; Peruvian dishes such as Arroz con Mariscos (scallops, shrimp and tilapia, sautéed with ranchero sauce and served with mixed vegetables); and vegetarian options, such as Crispy Yucca Fingers and Chiles Rellenos.

Clementinas, named in honor of Manuel’s mother, features four private dining rooms (with fireplaces) that can accommodate two to six guests. The prix fixe menu features five courses with a flight of Latin American wines. Clementinas is available for dining Friday and Saturday evenings (reservations required). The rooms are also available Sunday through Thursday for special events or private parties.

Manuel proudly notes that Culturas was the area’s first tapas bar. “We have food from different Latin cultures, which is why I named it Culturas,” he explains. Tapas can be anything, as long as it fits a small plate and is served with a drink. The idea is to be adventurous and sample a number of items. Culturas’ menu features both cold and hot tapas such as Ceviche, Gazpacho and Pincho (filet kabobs), as well as a few “large plates” including diver scallops and ratatouille-stuffed mushrooms.

While El Serrano is filled with people enjoying lunch, dinner or drinks throughout the year, it becomes even more of a destination in May, due to Cinco de Mayo celebrations. As part of its festivities, El Serrano hosts the statewide Ultimate Margarita Mix-Off on May 9.

El Serrano is located at 2151 Columbia Ave., Lancaster. Call 397-6191 or visit elserrano.com. Each of the three restaurants has its own hours, check the website or Facebook for details.

Other dining destinations for Cinco de Mayo and Mexican menu offerings include: 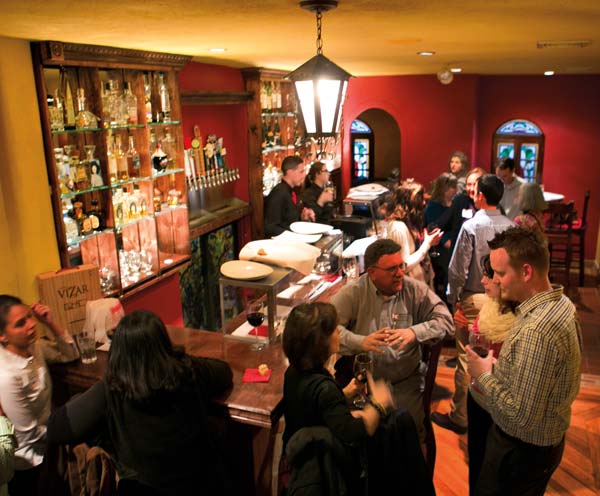 A tapas bar that is adjacent to Culturas recently made its debut.