America’s oldest farmers’ market is many things to many people. For some, it’s a shopping destination; for others, it’s a social experience. Tourists are mesmerized by it. No matter the relationship, Lancastrians are proud to call it their own.

You might call Central Market a living history cookbook due to the fact that it’s nearly as old as the county, which was established in 1729. When Andrew and James Hamilton planned the city of Lancaster a year later, they included a plot in the center of town that was dedicated to a public market. First operating as an open-air market, the concept proved to be so popular that it evolved over time, as a shed-like structure took shape in 1757. Later in the century, an arcade-style structure was built along the first block of West King Street. As many as 400 vendors conducted business on the site. Curb markets also sprang up in the vicinity of market.

The current market house dates to 1889. Its architectural style (Romanesque Revival), intricate brick and stone work and towers stand as testament to the role agriculture plays in the county’s economy. Fortunately, little has changed since 1889 outside of a few cosmetic changes that have been undertaken. Most of the significant changes are of the behind-the-scenes variety. Most obvious is the recently completed plaza-like area that borders two sides of the market house.

Visitors take comfort in the familiarity that the market house provides. Year after year, voters in our readers’ survey name Central Market as the best place to take visitors. The American Planning Association has twice (1995 and 2009) deemed it one of the country’s “great public spaces.”

The market is owned by the city and is managed by The Central Market Trust, which consists of community volunteers and the market manager.

Yes, you’ll find local flavor – fresh produce, the finest meat and delectables like sticky buns – at market, but change has been in the air for the last decade or so. Lancaster’s cultural diversity and the adventurous culinary spirit of foodies have helped to transform Central Market into an international phenomenon. Stands such as Delgiorno’s (Italian), Buona Tavola (fresh pasta with an Italian accent), Saife’s (Middle Eastern food and ingredients), Narai (Thai cuisine), Rafiki’s (African cuisine), Stella’s (Greek cuisine), Yasou! (Greek desserts) and Catering by Christina (Puerto Rican cuisine) now join with such long-time standholders as Stoner’s Homegrown Vegetables (100+ years) and Long’s Horseradish (60+ years).

The Greening of Market

Organic, grass-fed and free range are also buzzwords that have become an integral part of market. Foodies whose philosophy goes in those directions will not be disappointed by the offerings of stands such as Brogue Hydroponics, Green Circle Organics, Tulip Tree Hill Farm, Community of Oasis, and Country Meadows Farms.

Then, there are the stands that cater to our peculiarities. Lancastrians are picky about their celery, hence Sweethearts of Lancaster County is the go-to source. Chocolate milk?  Maplehofe Dairy’s is regarded as the best. Turkey jerky? Head for The Turkey Lady. 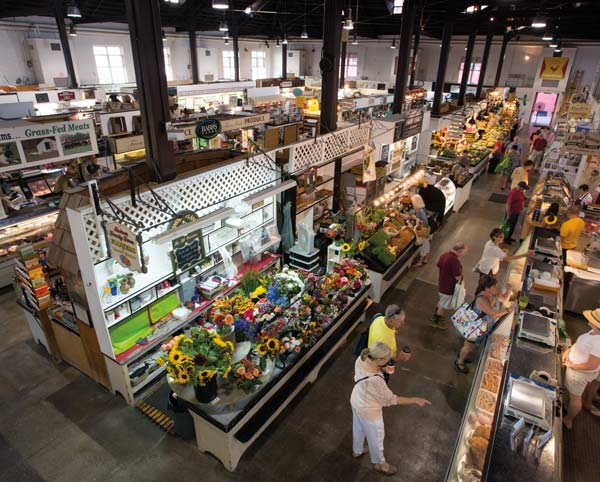 The sights, colors and aromas make Central Market a magnet for locals and tourists alike.