This Marietta restaurant combines the tradition of an Irish pub with the relaxed feel of a casual dining destination. This dual personality translates into an eclectic atmosphere.

Mccleary’s Pub was established by Michele and the late Kipp McCleary in 2000. Freddy and Danielle (Dani) States became its owners in June 2006. The building in which McCleary’s makes its home has some history connected to it. Dating to 1850, it was formerly the site of Eckman’s and Indian Queen hotels. 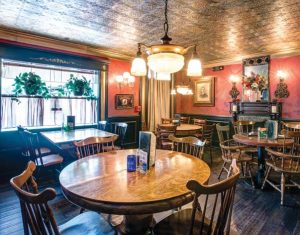 The pub exudes the charm of Ireland and Marietta.

Walk through the front door and the sensation of being transported to a cozy pub in Ireland takes over. The imposing wood and copper-topped bar, hi-tops, and traditional tables and chairs are complemented by the Victorian-style lighting fixtures and a fireplace.

Freddy explains that the beautifully crafted woodwork throughout the restaurant is the work of a local carpenter.  “People are often surprised by the pub. The front of the building isn’t that unique, but then they walk in the front door and see a traditional Irish pub,” he says.

The double-sided bar serves two pub-style areas. The second area features booth and table seating as well as a stage for live entertainment, which is in keeping with Irish tradition. The stage is used often: trivia night is the first Wednesday of the month, and there’s a full schedule of live musical entertainment that spans genres from bluegrass and blues to funk and Irish music that is offered Wednesday through Saturday nights.

While the pub has its own unique charm, the newly renovated 2,000-square-foot garden room provides a radically different experience. McCleary’s regulars will recognize this area as the former patio. Freddy points out that what had been a three-season room has been converted into a glass-enclosed four-season dining area. During warmer weather, the glass doors will open. In cooler weather, four gas-fueled fireplaces keep the area cozy and warm. Ceiling fans and a trellised ceiling provide the area with a spacious, outdoor feel.

The garden room, which has a seating capacity of 100, has its own bar. A raised dining area in one corner can double as a stage for live entertainment. “Music is important to us. Even when we don’t have live music, we have music playing, and there’s a mix of styles,” Freddy explains.

The garden room can also accommodate private parties. Additionally, there’s a banquet room on the second floor for groups up to 39 people.

With the garden room completed, the couple is now working on an adjoining outdoor seating area – McCleary’s Pier. Freddy says the intent is to recreate a rivertown pier area. Murals painted on the wall that’s shared with the garden room will depict storefronts. “It’s my vision of what I would like Marietta to become – a vibrant river town,” he says with a smile.

“We have something for everyone here. People feel comfortable whether they’re casually dressed or in something more formal. With the opening of the Northwest Lancaster County River Trail, we have people stopping here as they hike or bike the trail,” Freddy explains.

The menu offers that same variety. Freddy reports that a new menu will debut in the spring. But don’t fear, a mix of traditional Irish fare, pub food and American favorites will have their places on the menu. Irish fare includes fish and chips, bangers and mash, and shepherd’s pie. “The traditional Irish fare is our most popular, but our steaks and seafood are also favorites,” Freddy notes. One change will include the debut of daily specials such as Taco Tuesday.

As one would expect of a pub, there’s a wide variety of beer available, both on tap and bottled. Beer on tap includes regional craft brews and some seasonal items that rotate in and out. Irish brews Guinness, Smithwick’s and Boddingtons are always part of the mix. The extensive bottled list includes a number of premium and craft beers.

The wine list offers a variety of red, white and sparkling selections. The martini list is also expansive and features the signature McCleary’s martini made with Celtic Crossing liqueur. There’s also a selection of cognacs and after-dinner drinks as well as Scotches (including single-malts) and whiskey.

Mccleary’s St. Patrick’s Day celebration won’t be confined to Friday, March 17 – the fun and festivities continue throughout the weekend. Corned beef and cabbage and Guinness stew in a bread bowl will join the menu lineup. Live entertainment will include two bands on Friday, a band on Saturday, Irish dancers on Sunday and an impromptu appearance or two by bagpipers. “One of our regular diners is a piper, and he pops in periodically to play the pipes,” Freddy explains. 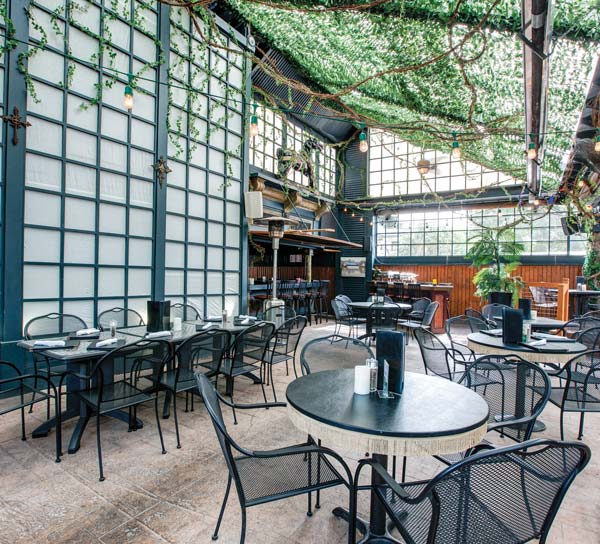 The cure for the winter blahs is as close as McCleary’s Pub, where the newly renovated, glass-enclosed garden room is now open year-round.