Last September, we listened intently to the news, notably the weather forecasts. Hurricane Florence was making her way across the Atlantic and was primed to unleash her fury on the East Coast, specifically the Carolinas. It appeared our annual trip to the Outer Banks of North Carolina would be canceled, as an evacuation order was put into effect. We needed to come up with Plan B. 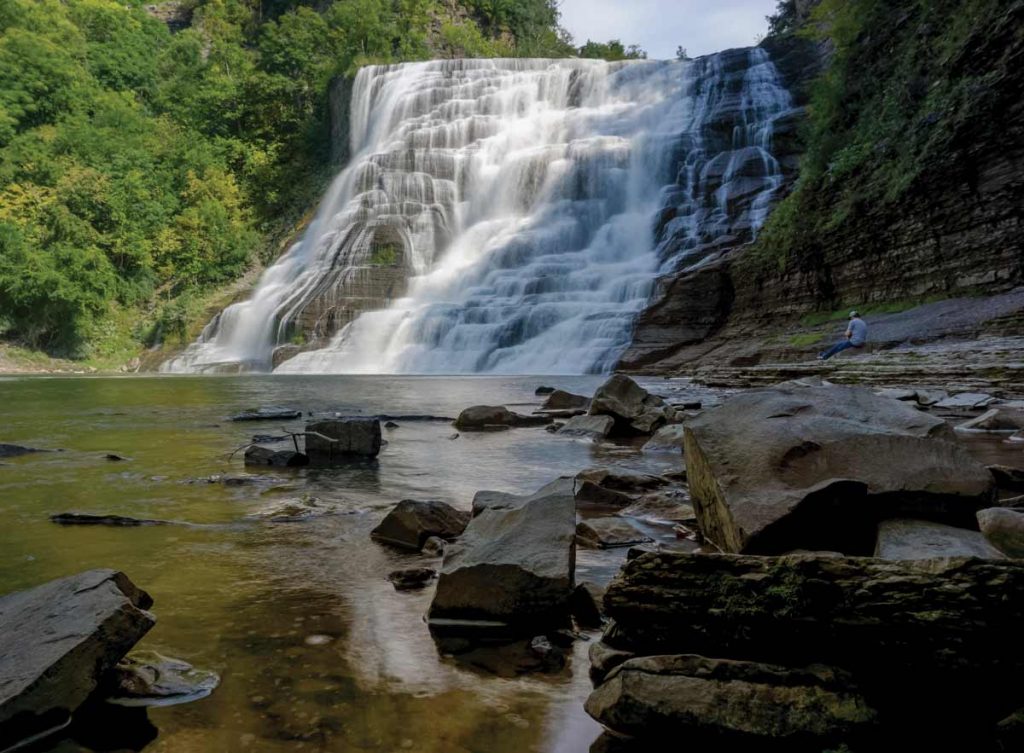 You can discover more than 150 waterfalls within a 10-mile radius of Ithaca, New York. Pictured is Ithaca Falls Natural Area’s namesake falls. It is 175 feet wide and drops 150 feet into Cayuga Lake on whose banks six mills once operated. Their ruins are still visible. Incredibly, the falls is a short walk from Ithaca’s downtown area.

Suddenly it appeared that heading north would be the answer to saving our family vacation. But, where? We had discussed a trip to Niagara Falls in the past, so we decided to head for the U.S./Canadian border. But, before we could take off, some research was needed. The first thing we learned was that Niagara Falls is not only part of the New York State Park system, but it also holds the title as the first state park in the nation, as it dates to 1885. We were sold and decided to investigate a few other state parks along our path to Niagara. After all, New York has over 2,000 waterfalls. We quickly found ourselves planning an entire trip dedicated to chasing waterfalls.

Waterfalls are literally a force of nature. They commonly form in the upper courses of rivers that flow through mountainous regions. The Poconos, the Great Smoky Mountains, Yellowstone and Yosemite all come to mind. Waterfalls are grouped into 10 broad classes, which are based on the average volume of water that’s present on the fall (determining factors include average flow and height). Niagara is regarded as the most powerful waterfalls in North America, hence its Class 10 ranking. Waterfalls are also categorized by type (under which are subtypes). For example, Niagara is a ledge-type waterfalls, meaning the water descends vertically over a vertical cliff, all the while it maintains partial contact with the bedrock. 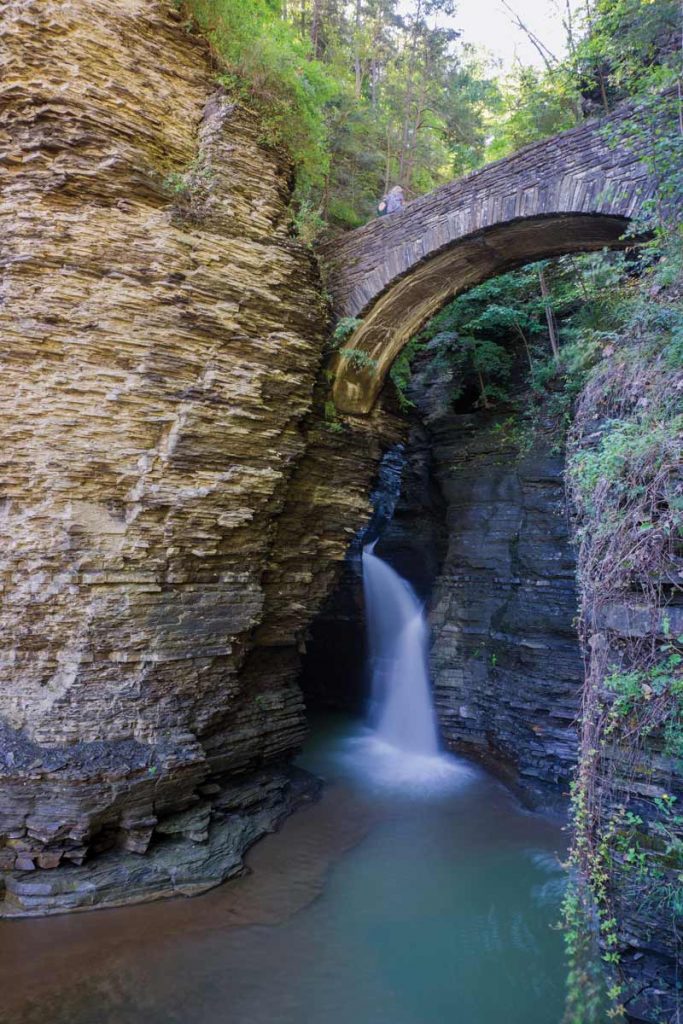 One of our stops would include Watkins Glen State Park, where I looked forward to hiking the Gorge Trail. In 2015, the park was a nominee in the USA Today Readers’ Choice Poll for Best State Park in the United States; it took third place. Unlike parks that feature one main waterfall, the roughly 2-mile Gorge Trail passes by 19 different falls on a beautiful series of interconnected pathways. 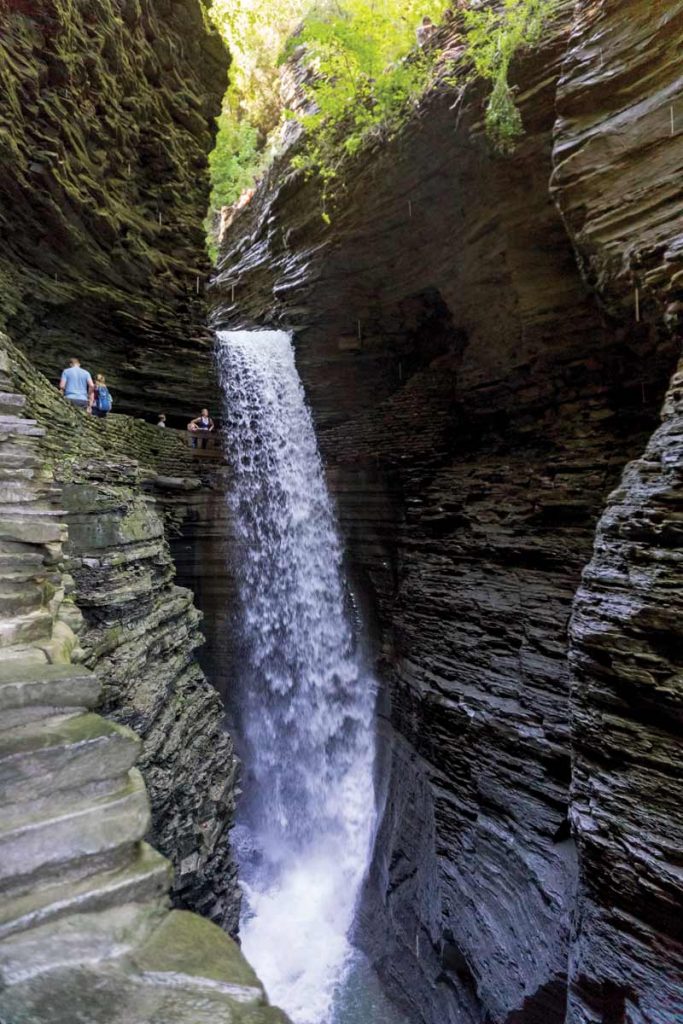 The Gorge Trail itself is a beautiful display of hand-layered stonework that guides visitors throughout the glen. Gorgeous stone staircases twist through man-made caves and across stone-arch bridges, all of which seemingly blend into the natural features of the glen. One of the most popular places in the park is definitely the narrow piece of path under the veil of the 60-foot-tall Cavern Cascade. Almost everyone stops for a quick selfie under the veil, and a few people stick their fingers into the falling water before exploding into a fit of giggles. 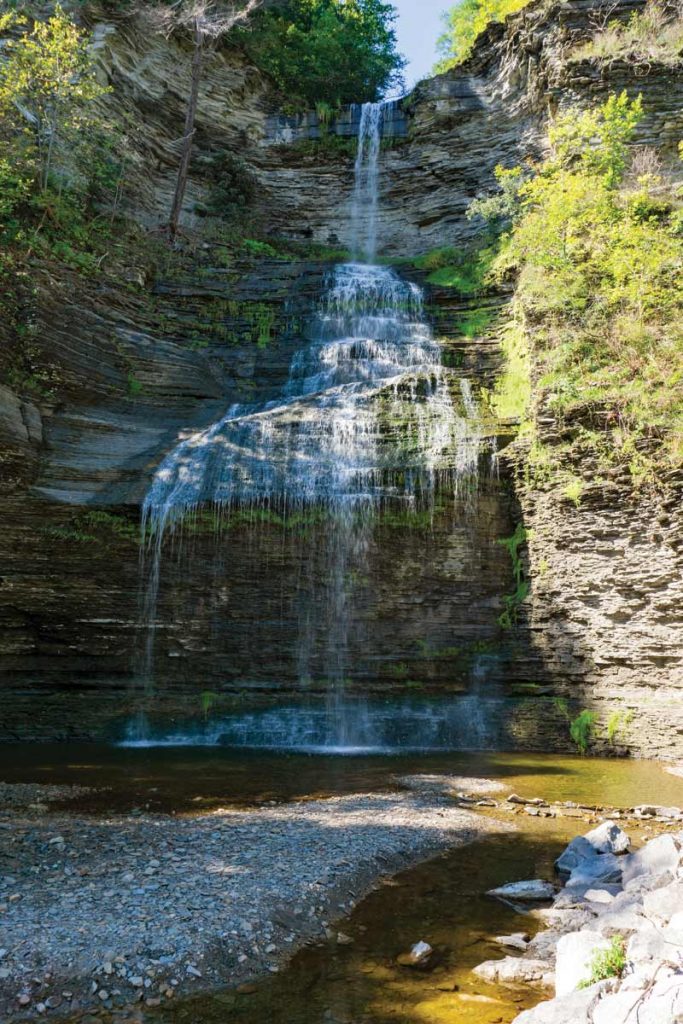 Montour Falls and a nearby namesake village take their names from Queen Catharine Montour, a prominent Seneca woman who lived in the area during the 18th century. The “valley of tumbling waters” regards itself as the southern gateway to the Finger Lakes region.

While studying the map, I noticed a few waterfalls just south of Watkins Glen in the tiny town of Montour Falls. We stopped by two of the most notable, Montour Falls and Shequaga Falls, both of which are impressive and easily accessible from along the roadside. They made for handy stops to let the kids burn off some energy before hitting the road on the next leg of our journey, Niagara. 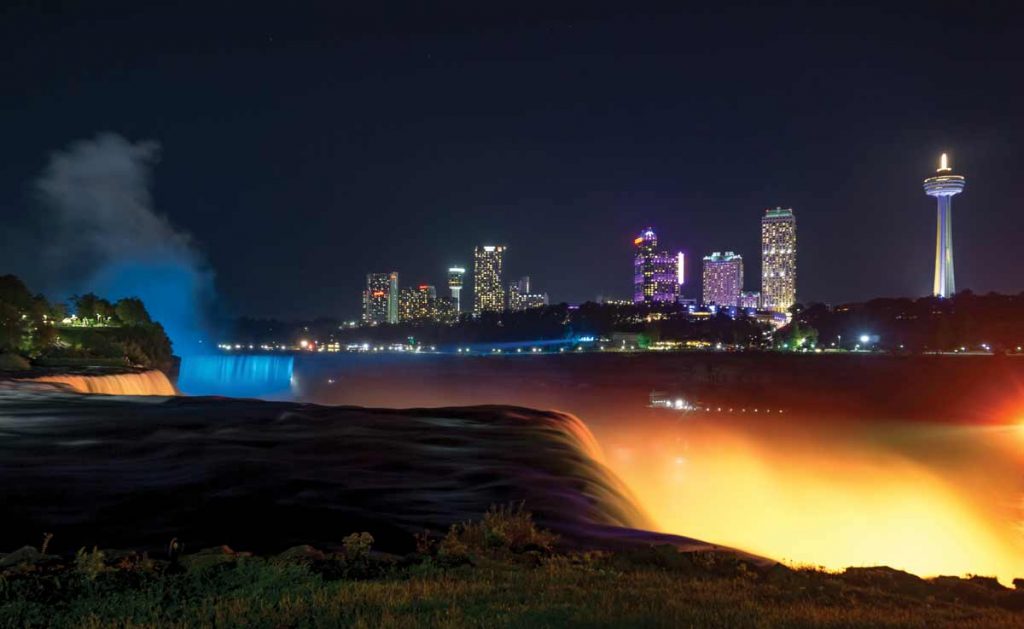 While Niagara Falls is impressive by day, at night they are spectacular thanks to an illumination system that paints them in a kaleidoscope of colors. The light show promises to get even better with the introduction of LED technology. During the summer, the falls are illuminated from dusk until 2 a.m. each day. Fireworks also light up the night sky over the falls each evening from June 17-September 2.

The next morning, our first stop was the American side of Horseshoe Falls in Niagara. We wanted a quick peek before we started exploring the park. I have to say, words and photos do little to prepare you for the sheer size and power of the falls. Indeed, they are the widest and most powerful in North America. I struggle to find a comparison to standing next to them as they rumble and roar like never-ending thunder.

Our next task was to purchase our Discovery Passes, which provide the best (and most economical) way to experience all the activities of the park. You can, of course, purchase individual tickets for each activity, but if you want to do everything, this is the way to go.

With tickets in hand, we immediately began a whirlwind of activity. We geared up for the Cave of the Winds tour, for which visitors are provided with sandals and plastic bags for shoes and anything else you want to keep dry. We then boarded an elevator that took us down 175 feet to the bottom of the gorge that’s right next to Bridal Veil falls, the smallest of the three waterfalls.

This tour provides a stunning view of the American falls, where you’re free to explore the decking that partially extends over the rushing waters of the falls. For those brave enough, there’s a special extension called the “Hurricane Deck,” which allows you to step almost directly under the mighty flow of the falls. That part is optional, but the Cave of the Winds is not – it is the must-see attraction in the park.

Still damp, we made our way to the iconic Maid of the Mist tour, which has been in operation since 1846. Initially a ferry operation, the focus shifted to sightseeing when construction of a suspension bridge over the gorge began in 1848. After a few minutes onboard, we began slowly chugging our way upstream. Here is the only spot from the American side to get an absolutely stunning panoramic view of the American falls from river level. As we approached Horseshoe Falls, the mist powerfully consumed the decks of the boat. The force was so powerful that it made almost everyone on the lower deck step back from the railing and take cover.

The next day we stayed a bit drier and took the time to enjoy the trolley tour and visit the Niagara Aquarium. That evening, we paid a visit to the illuminated falls.

We were so busy seeing the sights on the American side that we didn’t even make it to the Canadian side. But, that’s OK – it leaves room for a future trip. Not a bad deal when you consider that my children still talk about it regularly. 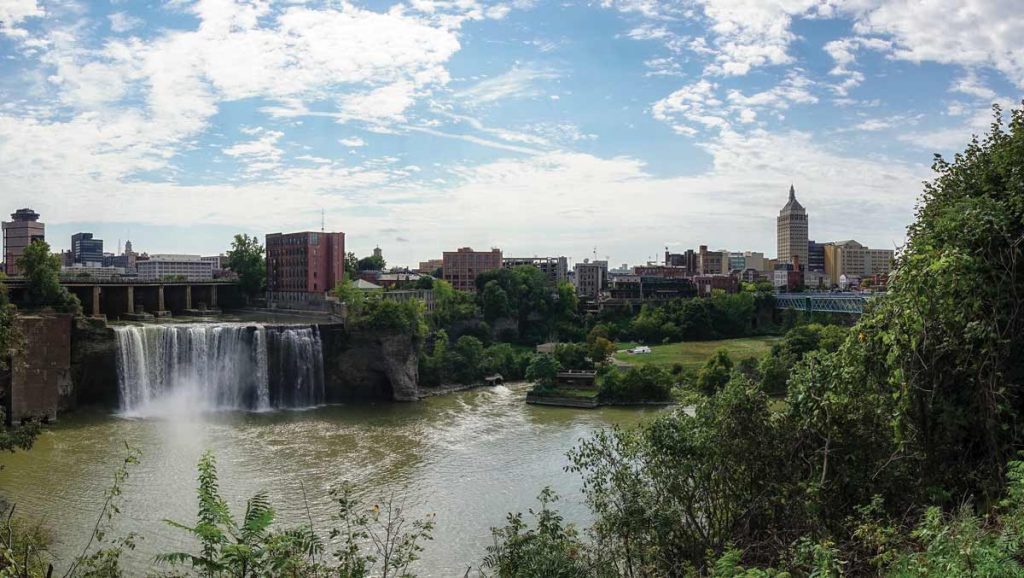 High Falls is one of three waterfalls that define the Genesee River, which flows through Rochester, New York. The area around the 96-feet-high falls was the site of much of the city’s early industrialization.

On our return trip, we had to decide between Letchworth State Park in western New York and Robert H. Treman State Park near Ithaca. While Letchworth looks amazing, we opted to save that for another time and add a few extra stops en route to Ithaca. Those late additions included the High and Lower falls in downtown Rochester, followed by the gorge overlook at Taughannock Falls State Park and finally the Ithaca Falls Natural Area.

We arrived at Robert H. Treman State Park late in the evening and didn’t have much time to explore. We quickly took a walk over to the Lower Falls, which is used as a swimming hole during the summer months. We had heard about this, and it looked pretty sweet. It even has a diving board for that perfect summer photo floating through the air with a beautiful waterfall in the background.

I was concerned the family might not be up to another day of walking, so the next morning I ventured off alone to the top of the park and explored the 2-mile Gorge Trail that passes by 12 more waterfalls, including the 115-foot Lucifer Falls. Descending from the top of the park, the trail features gorgeous stone work much like Watkins Glen but with massive gorge walls that tower over head.

Deciding this was too good to miss, I headed back to rally the troops for one last hike. The best part was that we basically had the entire place to ourselves during our hike, prompting me to declare Robert H. Treman the most underrated park I’ve ever visited.

After the trip, we counted our blessings. Our friends to the south were marginally impacted by the hurricane, and our impromptu waterfalls road trip was better than we could have possibly imagined, especially given our limited emergency budget. With over 2,000 waterfalls across New York, we barely dented our waterfalls checklist and have no shortage of ideas for future trips. 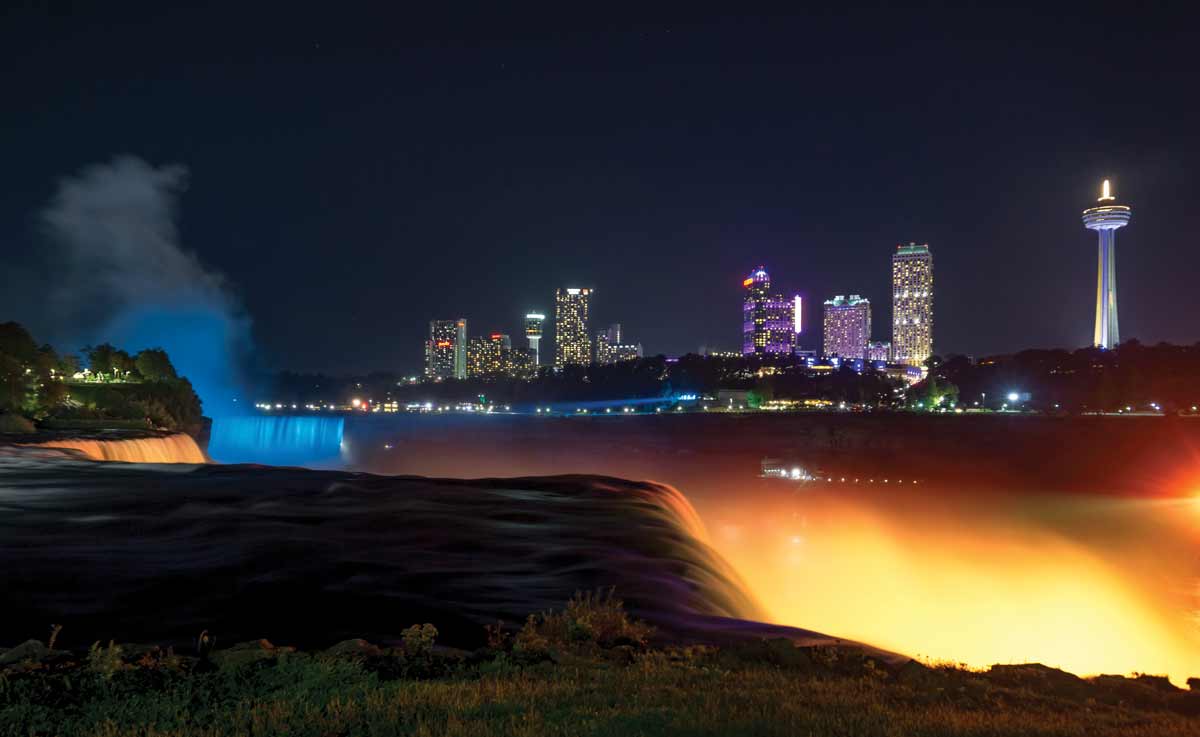 While Niagara Falls is impressive by day, at night they are spectacular thanks to an illumination system that paints them in a kaleidoscope of colors. The light show promises to get even better with the introduction of LED technology. During the summer, the falls are illuminated from dusk until 2 a.m. each day. Fireworks also light up the night sky over the falls each evening from June 17-September 2.