The accolades should have rained from the heavens in recognition of chef Cedric Barberet’s latest achievement. The masses should have flooded his Lancaster City restaurant, Bistro Barberet & Bakery, just to have the opportunity to taste a dish recognized by Food Network judges as one of the best in the country. Yet, this crowning achievement in his over 25-year, star-studded culinary career fizzled into the vacuum-like atmosphere created by COVID-19. 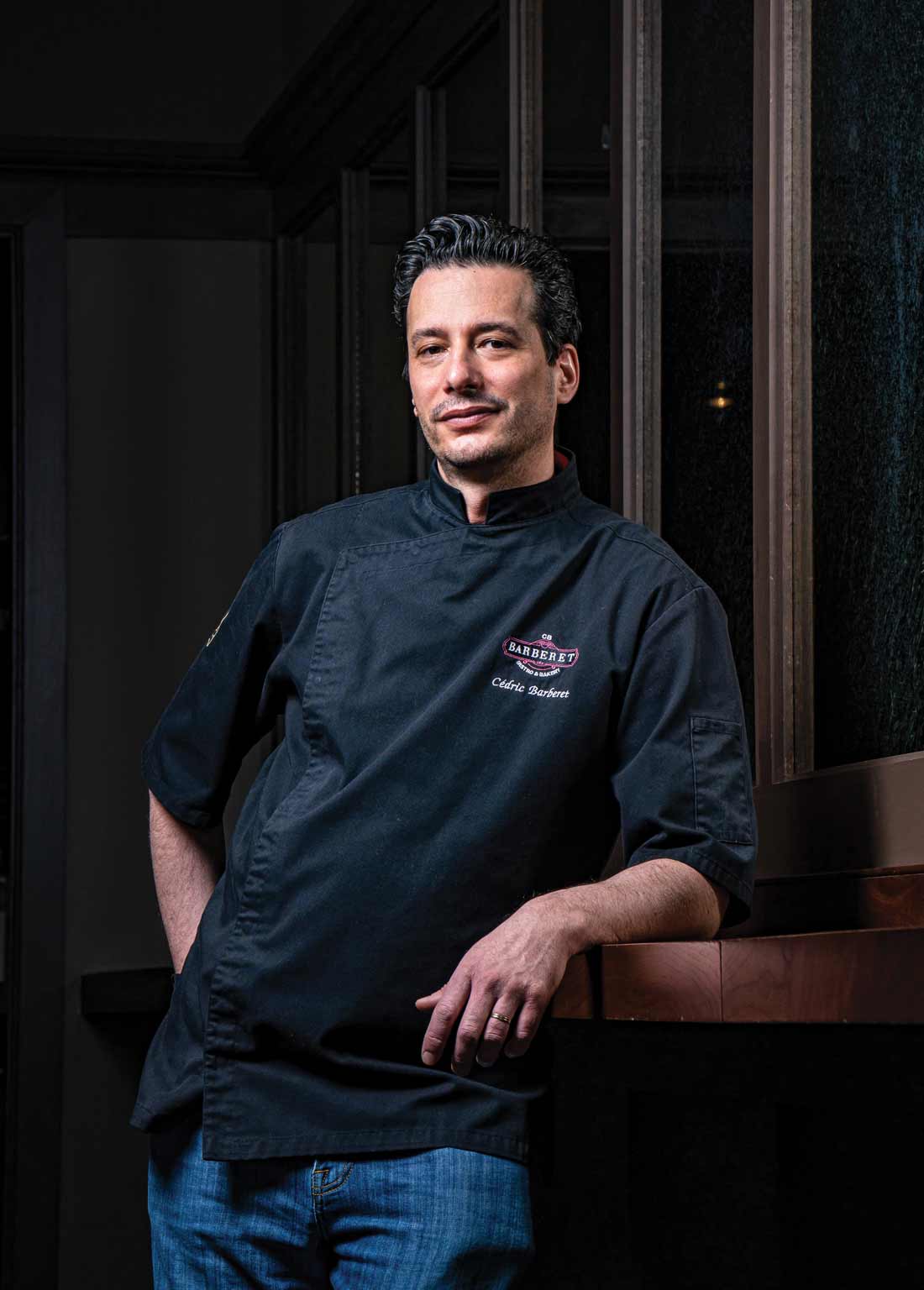 In November 2019, Cedric Barberet won the Neapolitan Delight edition of Food Network’s competition show, Chopped Sweets. Unfortunately, the world didn’t learn of his victory until the episode aired on April 20, 2020 – right in the middle of pandemic lockdowns and government stay-at-home orders. His restaurant was empty. “We probably would have been busy,” says Cedric.

Cedric is no stranger to competition and its merits or to the accolades he has received during his career. He has been honored as Chevalier de l’Ordre du
Mérite Agricole by the Académie Culinaire de France (for promoting French cooking and culture) and was named a Top 10 Best Pastry Chef in America in 2016 (by Dessert Professional Magazine). He and his restaurant were featured in Vogue Italia.

His resumé includes stops at the Mar-a-Lago Club in Palm Beach, Florida, as executive pastry chef, the M Resort Casino & Spa in Las Vegas under the auspices of chef Jean Claude Canestrier, as well as executive pastry chef at Philadelphia’s Le Bec-Fin and Buddakan restaurants. Looking for a location to open his own restaurant and bakery, Cedric and his wife, Estelle, settled in Lancaster seven years ago and opened Bistro Barberet & Bakery. His tenure at Mar-a-Lago provided him with some notoriety – he created Donald and Melania Trump’s elaborate wedding cake.

For Chopped Sweets, he set out with one objective. “My goal was not to be eliminated first,” laughs Cedric. “You never want to be the first to go.” Looking back on the experience, he describes it as “fun, but it is a lot more intense than what it seems. There is a lot of producing. I was running as much as anyone else in the competition, but they portrayed me as someone as cool as they can be.”

The show’s premise “challenges four bold pastry artists to take on one of the toughest tests of their lives.” The four contestants compete head-to-head and create desserts from a basket of mystery ingredients against “an unrelenting clock” to “demonstrate their skill, concentration and imagination as they race to see who will claim the $10,000 prize.” After each round of cooking, a contestant is eliminated until there is only one remaining.

Cedric was the last chef standing, a Chopped Sweets champion on Season 1, Episode 13. His competition included a bakery owner from Dracut, Massachusetts, a pastry chef from Detroit, and the pastry chef from the world-renowned Waldorf Astoria in Chicago (the runner-up).

Cedric arrived in Brooklyn, New York, the day before the 6:30 a.m. check-in time and made his way to a massive, nondescript warehouse, which served as the studio for filming the show. Viewers watching the final product do not get to see many of the elements the contestants had to deal with in this setting, explains Cedric. This is not a real kitchen. As he discovered, there was no proper kitchen ventilation and an absence of fans made the heat almost unbearable. 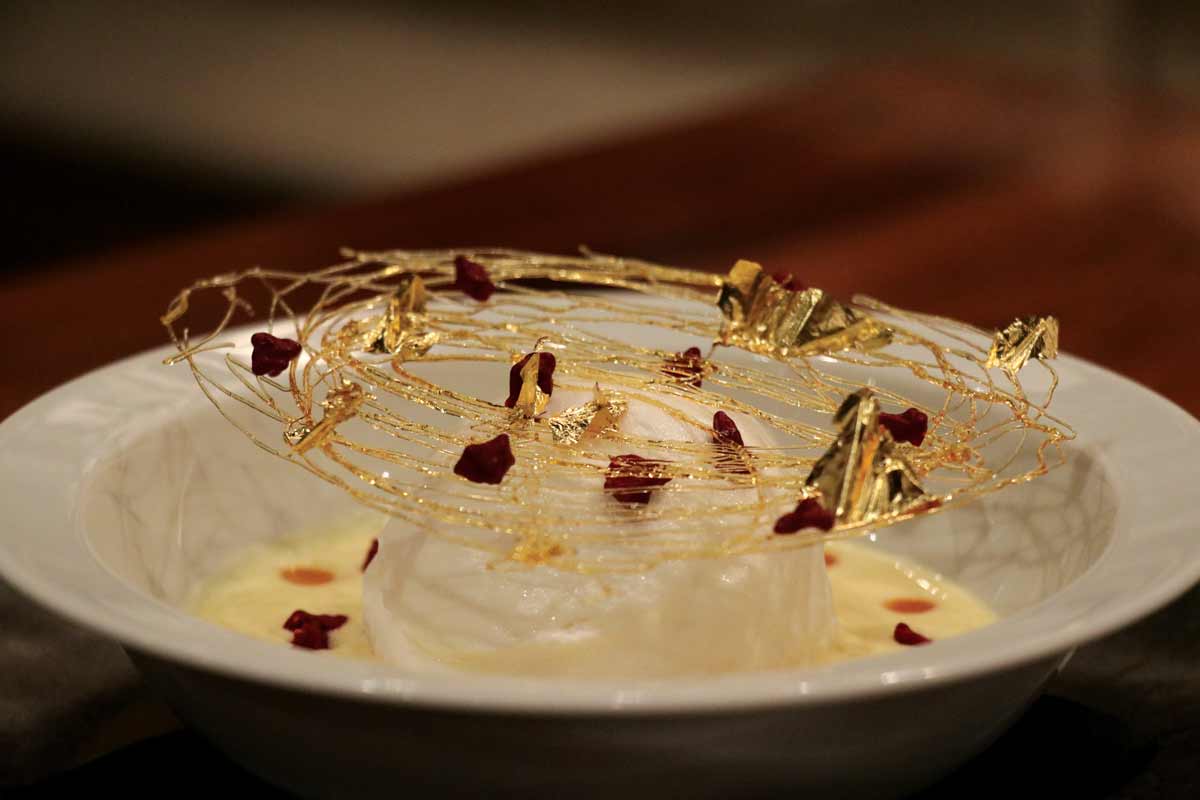 Upon tasting Cedric Barberet’s “floating island,” one of the judges described it as “sublime.” Cedric created the dish by using the ingredients in the mystery box: rotisserie chicken, vanilla bourbon cheesecake, vanilla chai latte mix and dried apricots. The dish, as Cedric prepares it, is on the menu at Bistro Barberet & Bakery. Photo by Michael C. Upton.

Contestants are tasked with creating an appetizer, an entrée and, if they are lucky enough to make it to the final round, a dessert. For each course, contestants must utilize a box of mystery ingredients. For this episode, the ingredients included: strawberry rice cereal treat, cilantro, century eggs and wild strawberry liqueur (appetizer); rotisserie chicken, vanilla bourbon cheesecake, vanilla chai latte mix and dried apricots (entrée) and a 24-layer chocolate cake, chocolate wine, frozen mixed berries and honey mustard dressing (dessert). “You really don’t know what is in the box until you open it,” revels Cedric. “But you do know the theme about 12 days before. I knew we were going to do Neapolitan, but I just did not know in what order.”

The Neapolitan theme meant that one dish would focus on vanilla, another on strawberry and another on chocolate. So, he prepared himself by developing recipes that could be adjusted for a myriad of ingredients. When he opened the box at the beginning of round two, he knew exactly what to make with the vanilla bourbon cheesecake, vanilla chai latte mix, dried apricots and rotisserie chicken that filled it. Okay, the chicken was a bit of a speed bump, but Cedric incorporated the crispy skin on top of a bourbon-apricot floating island whose finishing touch was an embellishment of edible gold leaf.

“You gotta do what you gotta do to win $10,000,” says Cedric in the show. The dish wowed the judges – Matt Adlard (aka The Topless Baker), Dan Langan (the Philly native hosts the popular series, Dan Can Bake It) and Scott Conant (a James Beard Award winner, restaurant owner and Food Network host) – and catapulted Cedric to the final showdown, which, of course, he won by creating a flexible chocolate ganache from the ingredients that were provided. 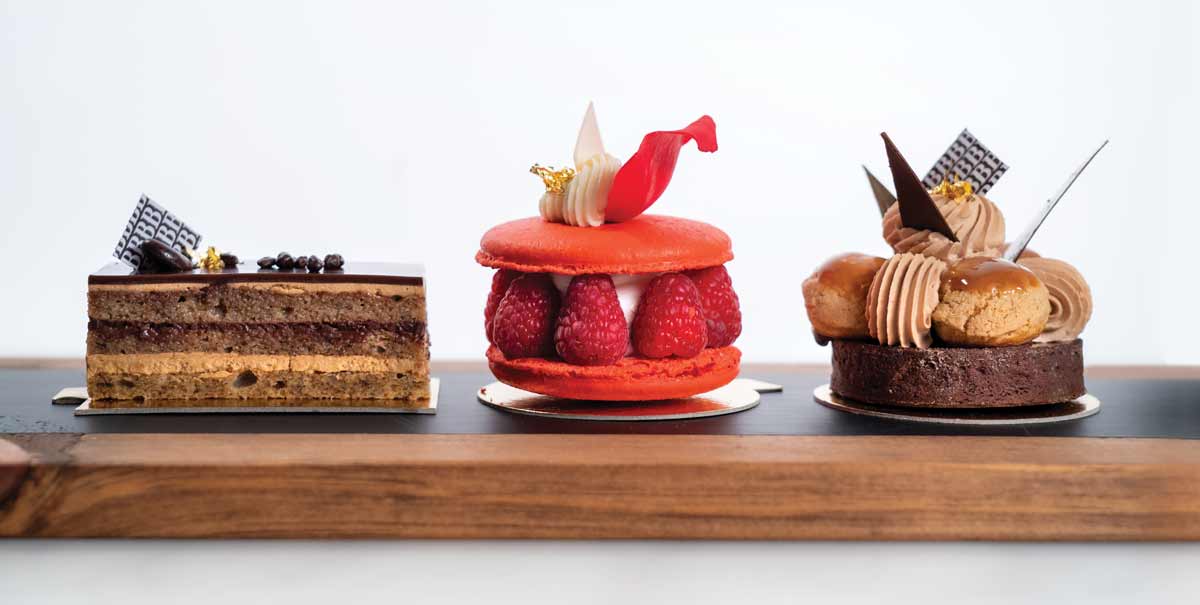 As Cedric explained in the Neapolitan Delight episode of Chopped Sweets, he is a classically trained French chef who adds “modern twists” to his creations. Photo by Nick Gould.

The floating island is a traditional dessert of meringue poached in either water or milk. Because of its controllability, Cedric prefers water. Milk, he says, provides a coating around the meringue, which some other chefs prefer.

“The meringue is set atop a bed of crème anglaise, which is a very nice, rich, custard cream made with vanilla beans. That’s why it is called a floating island,” explains Cedric.

The French dish, île flottante, first made its way into English-language cookbooks in 1747. The floating island rose to American prominence after being recorded by Benjamin Franklin in 1771. Whether incorporating liqueur-soaked sponge cakes or berry purée, the dish has had its variations over the years and ultimately fell out of favor for unknown reasons. Cedric’s variation is served with two types of caramel, crispy bits of palm sugar and freeze-dried raspberries. “The raspberries add a little more acidity to balance the sweetness from the caramel,” says Cedric, of the way he presents the dish at Bistro Barberet.

Filming takes place all in one day and Cedric didn’t leave the warehouse until 11 p.m. that evening. He was exhausted. But, as grueling as the competition was, he was leaving a winner. He shared with the judges and audience that he could not wait to share the news with his mentor/father, who heads the family-owned bakery in Villefranche-sur-Saône (eastern France), where Cedric once served as an apprentice. “He will be so proud,” he said.

The win would surely give his restaurant a boost of attention and a touch of notoriety. However, before the episode could air, Cedric was forced to shut down his restaurant and pivot to take-out because of COVID-19. He also had to cancel plans for hosting a viewing party at the restaurant. Fortunately, the floating island remains on the menu today! 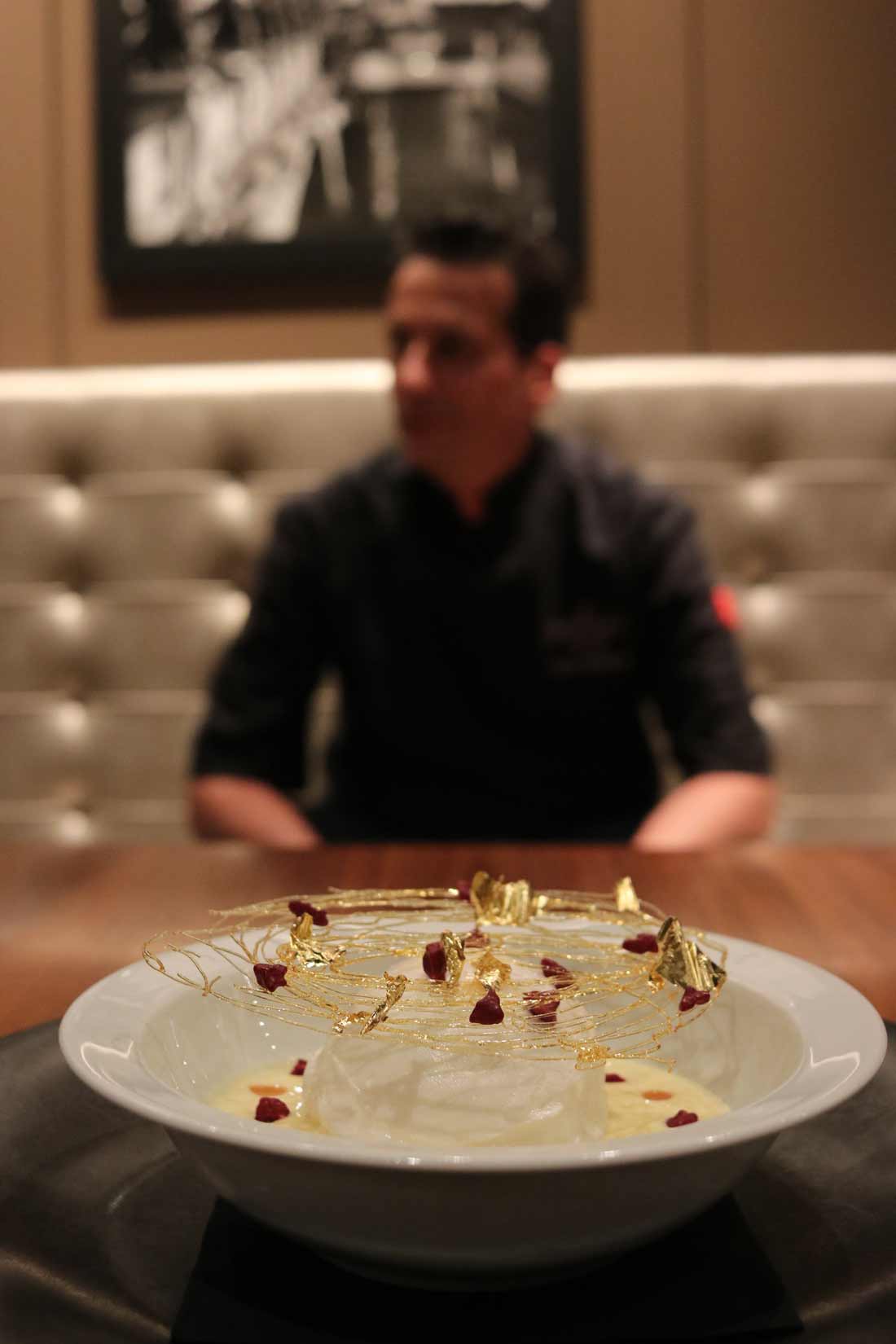 Bistro Barberet & Bakery is located at 26 E. King Street (Suite 1) in Lancaster. For information about hours and in-house dining, call 717-690-2354 or visit 26eastlancaster.com/barberet.

Most Americans are familiar with the term “Neapolitan” as an ice cream treat that entails three of the country’s favorite flavors: vanilla, chocolate and strawberry. (Turkey Hill, which was recently profiled on an episode of the History Channel’s Modern Marvels, has a line of triple-flavored ice cream it trademarks as Trio’politan.) 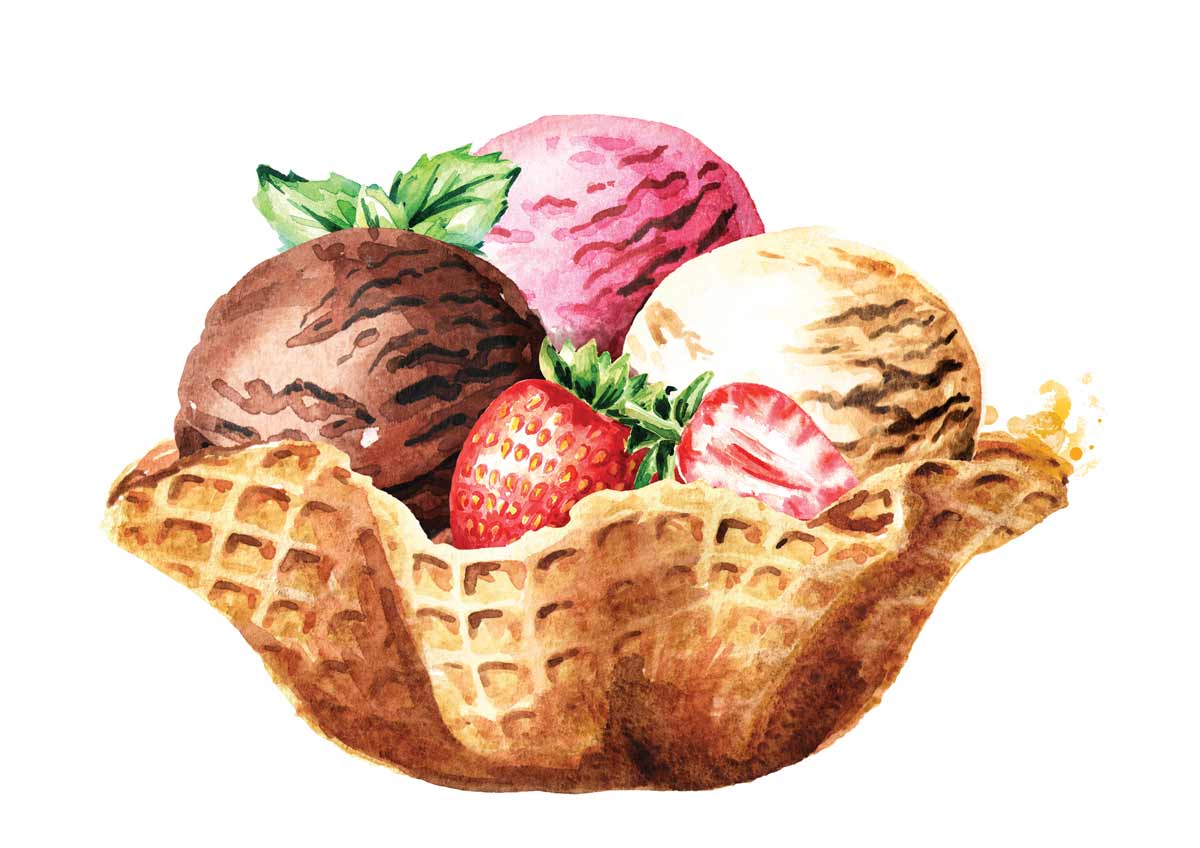 As it turns out, we have Italy – specifically Naples – to thank for Neapolitan ice cream. In the early 19th century, the Italians perfected the frozen dessert spumoni (and before that, gelato, sorbetto, granita and other icy treats), which is made with layers of different colors/flavors of gelato and often contains candied fruits and nuts. Italian immigrants brought their frozen-dessert expertise to America, where their tricolored creation became known as Neapolitan. Ice-cream makers took notice and adapted the spumoni desserts, with vanilla, chocolate and strawberry ice cream becoming the preferred flavor combo of Americans.

Upon tasting Cedric Barberet’s “floating island,” one of the judges described it as “sublime.” Cedric created the dish by using the ingredients in the mystery box: rotisserie chicken, vanilla bourbon cheesecake, vanilla chai latte mix and dried apricots. The dish, as Cedric prepares it, is on the menu at Bistro Barberet & Bakery. Photo by Michael C. Upton.