With staycations setting the trend for Summer 2020, the challenge is to find something to do that is family-friendly. Fortunately, you don’t have to look far to discover what draws an average of 100,000 visitors from around the globe to our own backyard.

Owners Jack and Donna Coleman didn’t move from New Jersey to Lancaster with the idea of becoming maze masters. Married in 1972, the first-generation farmers made the move to Ronks in 1987 to start a dairy operation. Their first herd of seven Cherry Crest Holsteins soon grew by leaps and bounds. The 200-acre farm has since moved into beef cows, broiler chickens, soybeans and corn.

Donna and Jack Coleman moved to Lancaster County from New Jersey in 1987 with the intent of becoming dairy farmers. They not only realized that goal but they also became leaders in the agri-tainment arm of tourism.

Realizing they’d have to supplement their income, the two began offering lodging. When that venture stalled, they became intrigued by an article they read about a small-scale cornfield maze that had been installed at Lebanon Valley College. Designed by Don Frantz, who co-owned the American Maze Company, it attracted attention from near and far.

The Colemans saw such a maze becoming an instant draw not only for their farm but for Lancaster County. Little did they know that they would become leaders in a new aspect of tourism called agri-tainment and come to own what is now regarded as America’s longest-running corn maze. 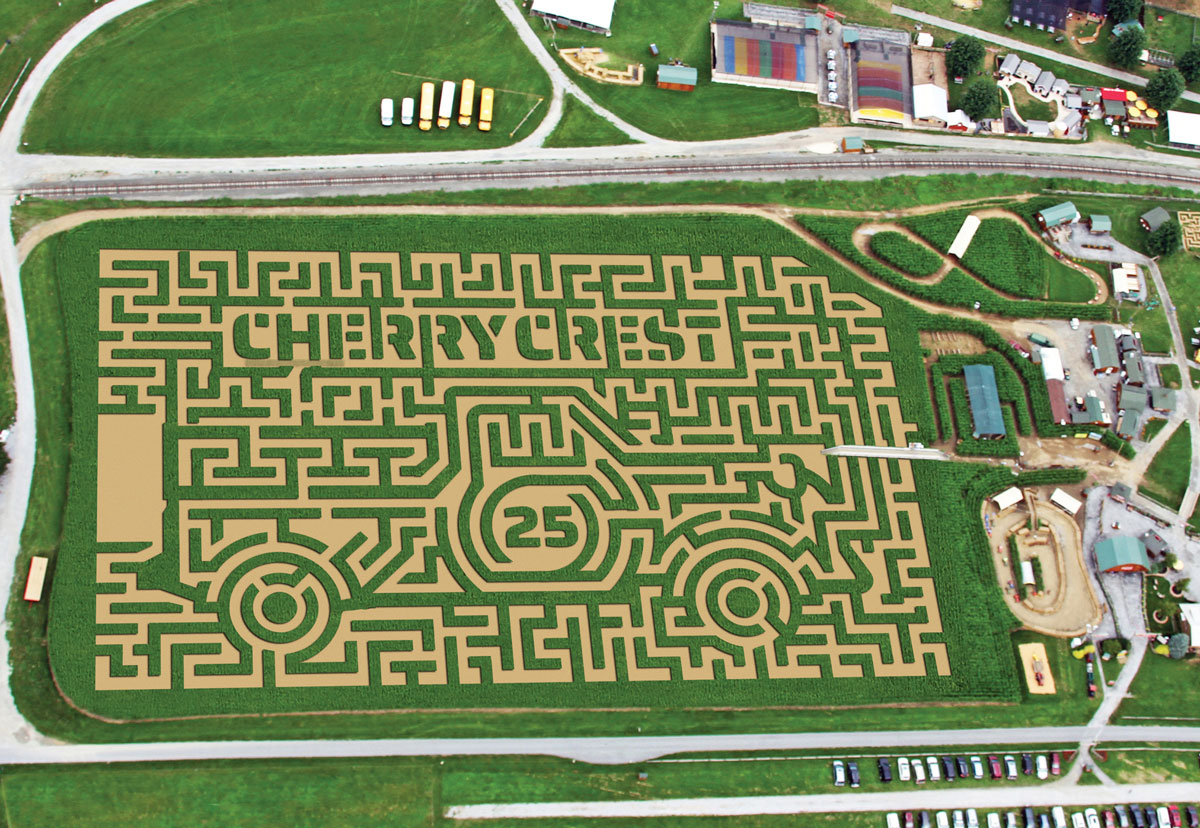 The 25th anniversary maze was inspired by the farm’s beloved vintage pick-up truck.

They contacted Frantz and by 1996, a maze in the shape of a locomotive – in honor of nearby Strasburg Rail Road – took over several acres of the farm. Since then, the maze has employed such themes as Noah’s Ark, the Liberty Bell, the solar system, a horse and buggy and man’s first walk on the moon. This year’s maze, which takes the shape of the world’s largest pick-up truck, covers more than 2.5 miles of pathways. The ever-popular Flashlight Maze kicks off weekends beginning September 18 and continues through November 7.

As for the astounding number of visitors, that can be attributed to exposure on the morning news shows, cable news outlets, countless newspaper and magazine stories and social media. 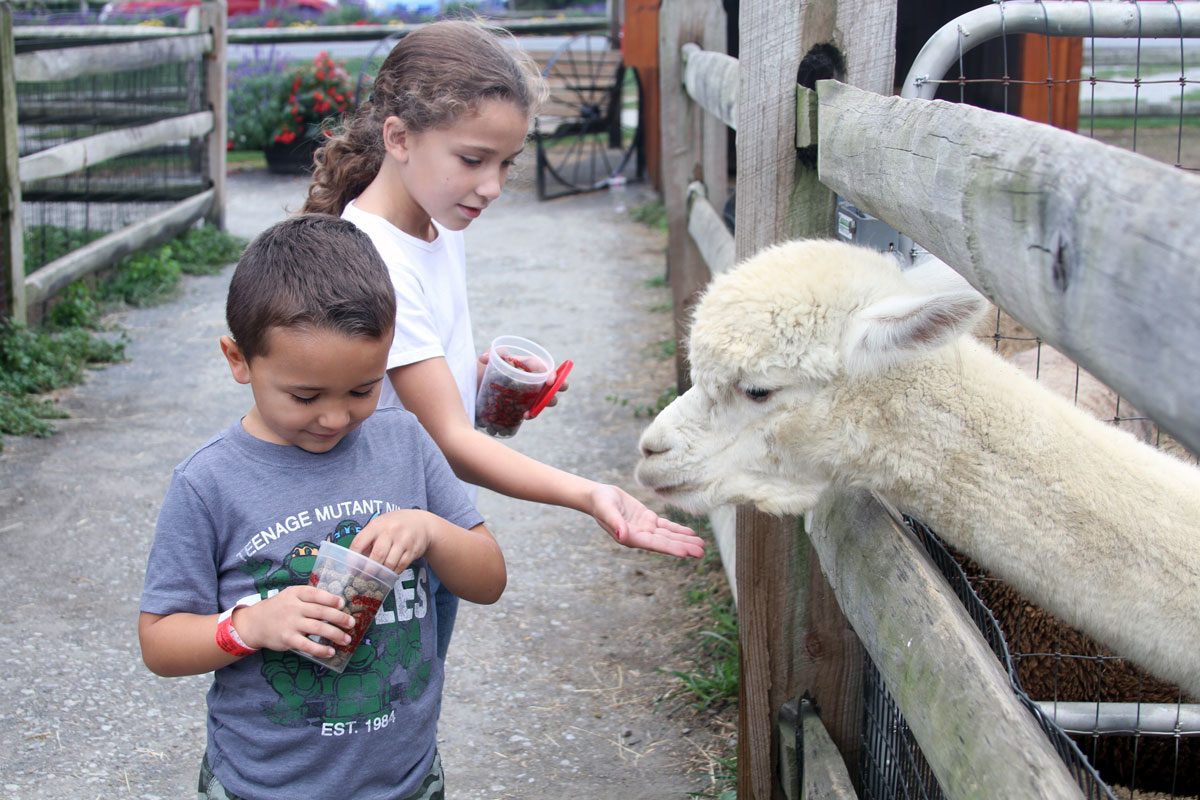 Educating visitors – especially youngsters – about agriculture is one of Cherry Crest’s goals.

While the maze is still the major draw, the Colemans have expanded their agri-tainment venue in numerous ways. Educating young minds on the workings of a farm has become an important part of the enterprise. For example, the Discovery Barn is home to the popular baby chicks hatchery and other interactive farm displays. An outdoor stage provides space for live demonstrations and entertainment. The Farm Animal Center and Animal Grove are filled with farm animals that visitors can pet and learn about. Visitors can truly revel in farm life by hopping aboard the Farm Tour Wagon that provides a close-up view of the cattle, poultry and farming operations.

For more action-oriented visitors, The Country Pig Races & Show is hosted in an arena-like area that features actors and a cast of racing piglets. There’s also the Shootin’ Gallery, which features a Paintball Range, Apple Blasters and Battle Zone.

The maze’s biggest competition probably comes from Cherry Crest’s Sproutsville Village, which made its debut two years ago and this year has expanded to include eight new attractions: a fire house, police station, theater, diner, farm house, bait & tackle shop, a camper and a faux lake. Kids love the pretend village that allows their imaginations to soar and social skills to expand. 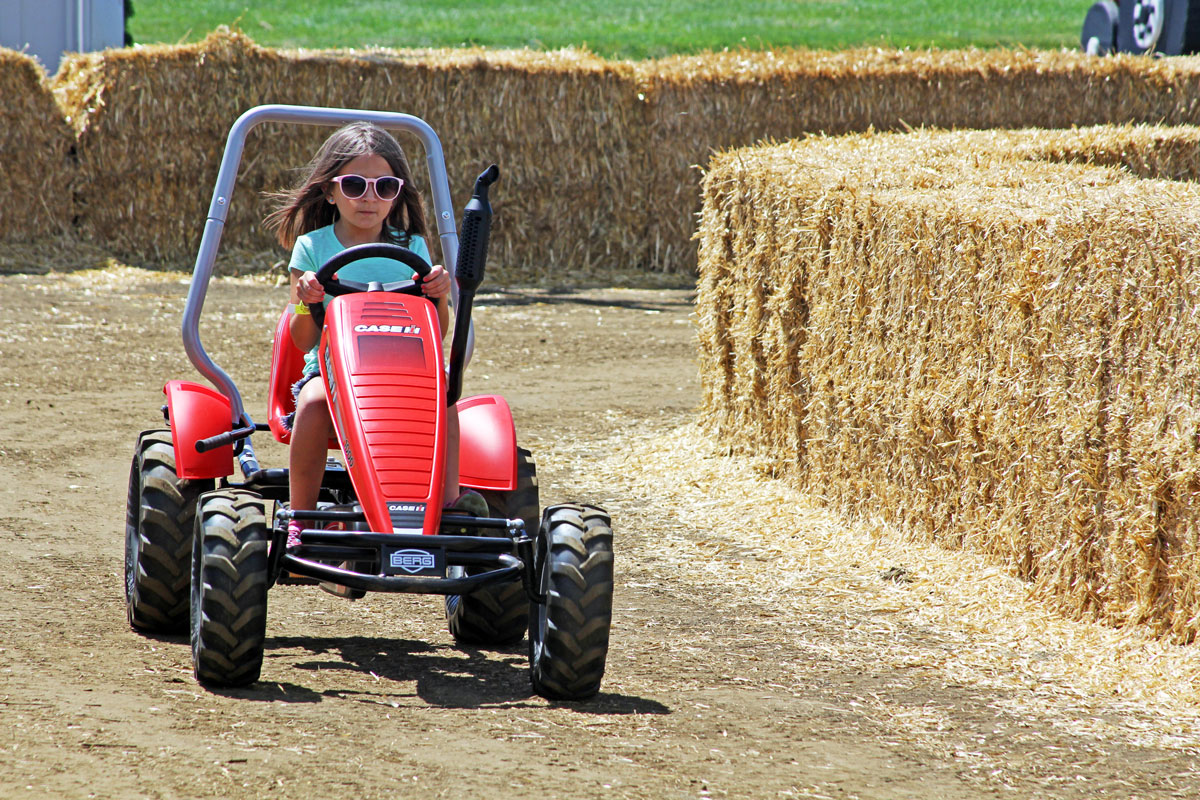 This year’s new attraction, Lil’ Farmers Playland, is equipped with swings, a corn crib, sand boxes and a giant slide that was crafted from a farm combine.

A day on the farm is sure to make you hungry and Cherry Crest has that covered, too. Visitors have access to nine different food corrals, wagons and cafés (including the Corn Café that is located inside the maze). Menus include burgers, fresh-picked sweet corn (roasted in husks), salads, hot dogs, wraps, cider donuts, kettle corn and fresh-squeezed lemonade. The School House Sweet Shop is home to 30 flavors of fudge.

Just as Cherry Crest has grown in size, so has family involvement. The Colemans’  daughter, Shelly Coleman Temple, is CFO of the adventure farm. Her sister, Sherri Coleman Groff, serves as COO. Sherri’s husband, Brian Groff, is the food and special projects manager. 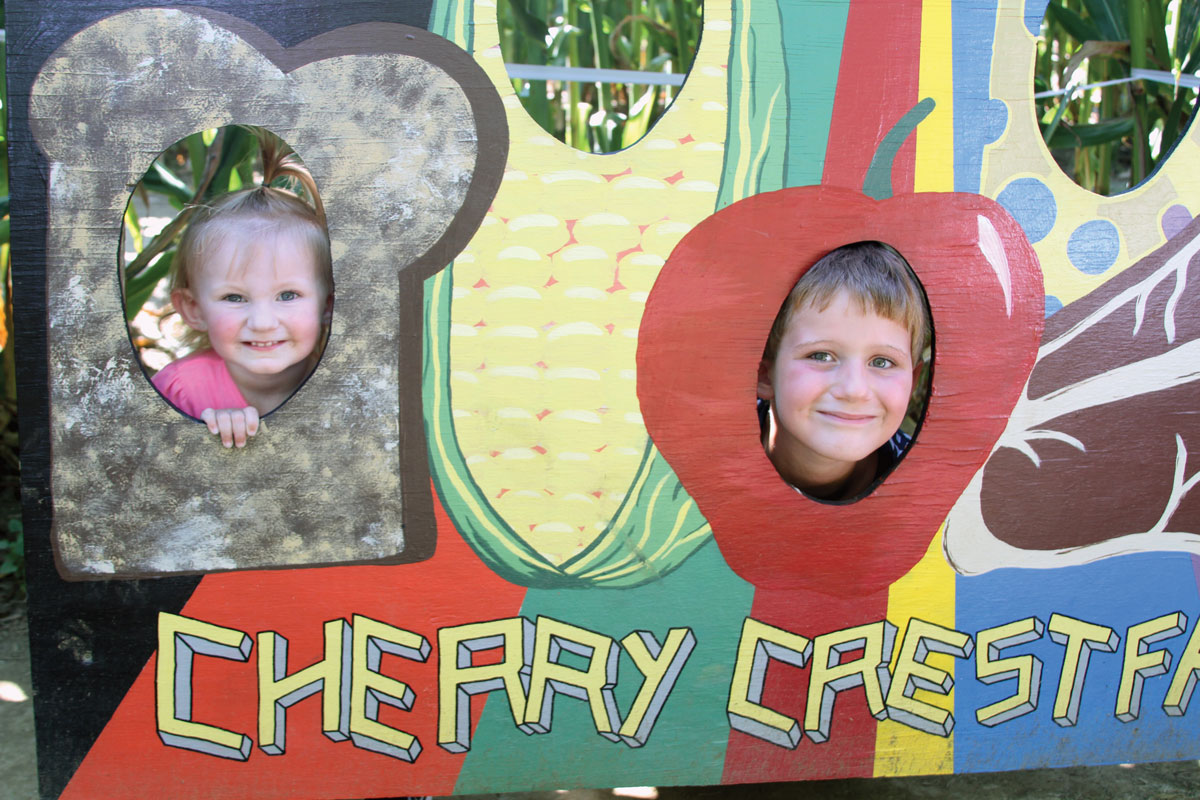 On the farm side, their son, Jared Coleman, works alongside Jack in farm management and is actively involved in the farm’s broiler operation. Their other son, Dylan Coleman, who has a degree in business, is assisting his father in the sale and application of their dust-control product – Dustkill – that is made from soy bean oil.

A third generation is learning the ropes – three of the Colemans’ grandchildren work on the farm on a seasonal basis. 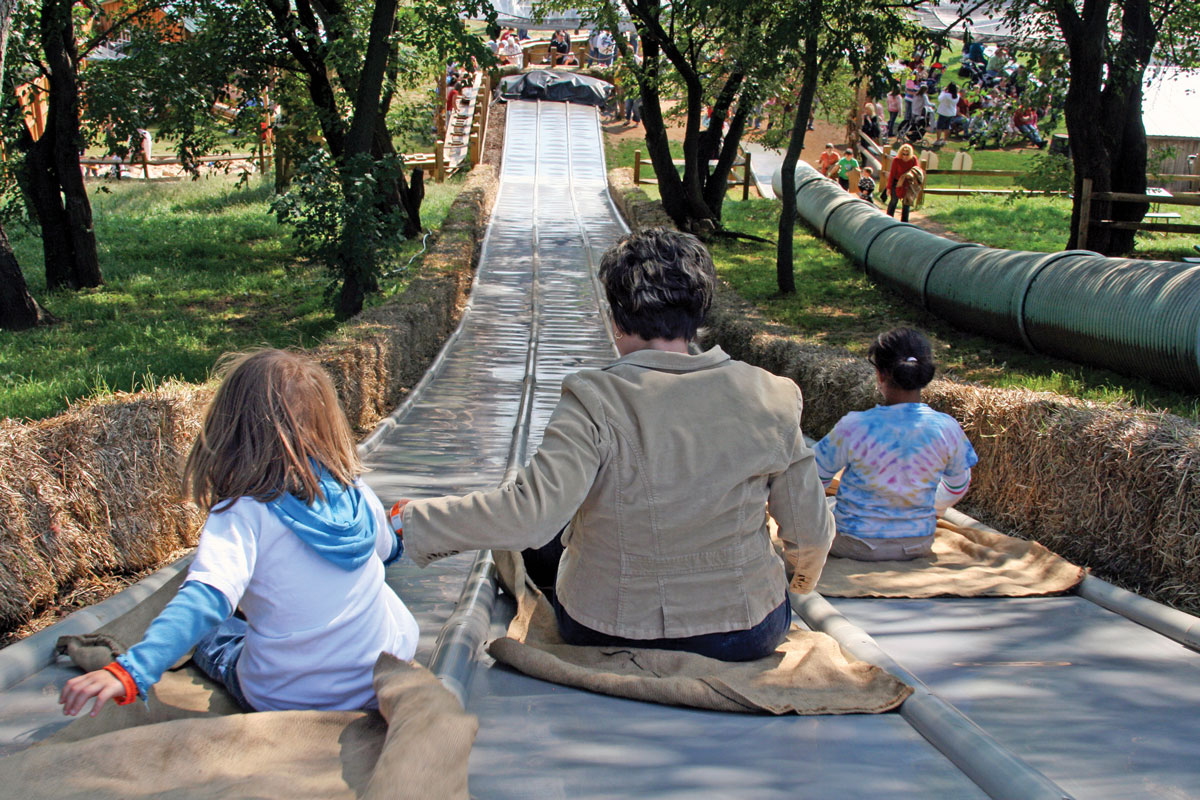 All the “rides” at Cherry Crest have a subtle tie-in to agriculture.

While CHERRY CREST’s Early Season was suspended due to COVID-19, the farm’s Summer Season activities, including the maze, opened July 3, just as Lancaster County moved into its green phase of reopening. The Colemans used the time to develop policies that will ensure health safety for visitors and employees alike.

The policies include screening employees before the start of their shifts, following local COVID-19 procedures and ramping up their already vigorous cleaning procedures. Hand sanitizer stations are situated around the farm and cashless transactions are handled with as little contact as possible. In addition, the number of guests in each  building is monitored and overall visitation is being kept to 50% of capacity. With access to 25 acres, visitors should easily be able to practice social distancing.

Donna and Jack Coleman moved to Lancaster County from New Jersey in 1987 with the intent of becoming dairy farmers. They not only realized that goal but they also became leaders in the agri-tainment arm of tourism.