The connection between chocolate and Valentine’s Day was a result of the newly found availability of edible chocolate treats. In 1861, British confectioner, Richard Cadbury, began selling his chocolate creations in self-designed, heart-shaped boxes that bore images of roses and cherubs. Marketed for the masses, the Valentine’s gifts were a hit, and the trend carried over to America. 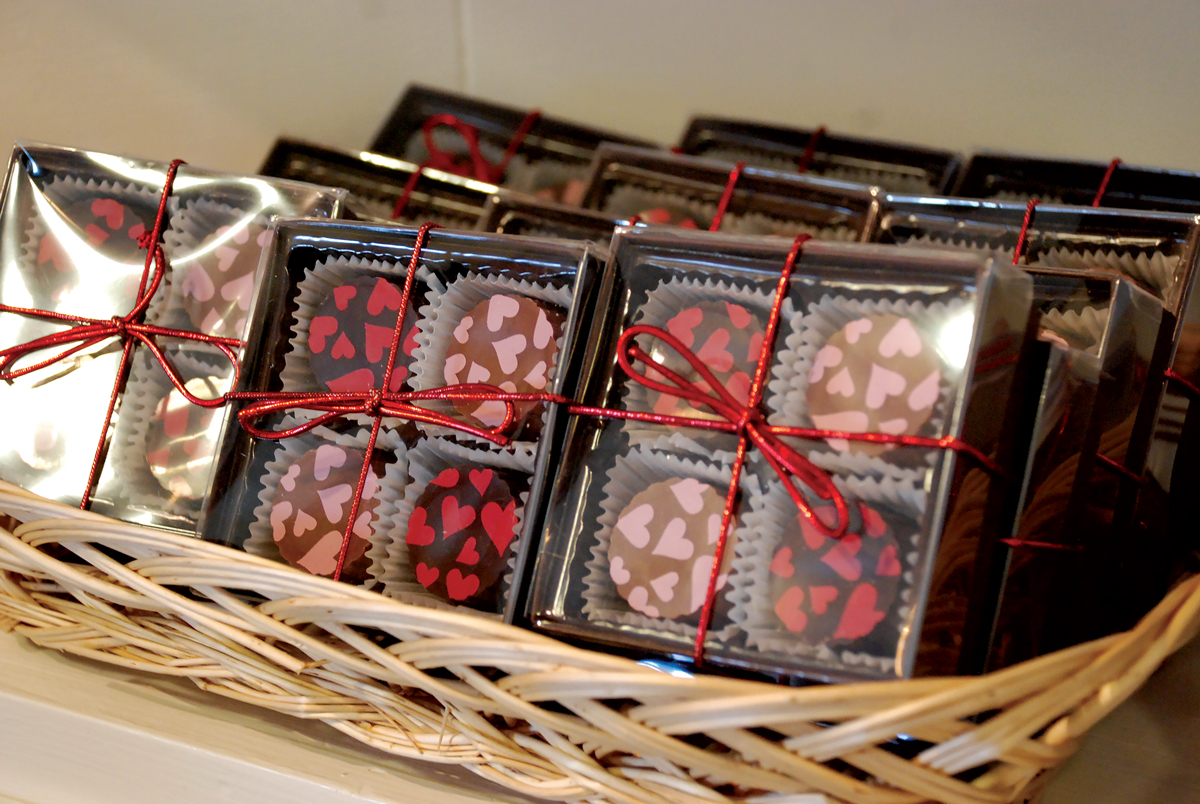 Centuries ago, chocolate was as valuable as gold. Aztec and Mayan cultures traded in cacao, and the elite sipped a warm drink of roasted beans with cornmeal, vanilla, honey and chilies. It wasn’t until the 1600s when Europeans embraced the decadent beverage concoction and a creative chocolatier found a use for chocolate remnants produced while making the drink that its popularity surged.
The luxury of “eating chocolates” was born, and the world has never been the same – U.S. chocolate sales topped $21 billion last year. That number reflects everything from Hershey Kisses and Kit Kats to the La Madeline au Truffe (a truffle crafted from rare French Perigord mushrooms as well as other high-end ingredients); custom-made by Knipschildt Chocolatier of Connecticut and priced at $250 each, it’s deemed as the world’s most expensive chocolate by Forbes magazine.
I first discovered chocolate as more than an impulse buy at the grocery store when mixing up elaborate cocktails. I wanted to make a spicy, Mexican chocolate martini at home, so I found a hunk of Taza Chocolate, Cacao Puro. My chocolate enlightenment was further advanced when I became friends with an employee of Mast Brothers Chocolate in Brooklyn.
I’ve learned that there’s more to modern chocolate than milk and dark. While Lancaster County embraces the modern, it continues to cling to its traditions with many of the founding companies still functioning alongside mom-and-pop institutions. 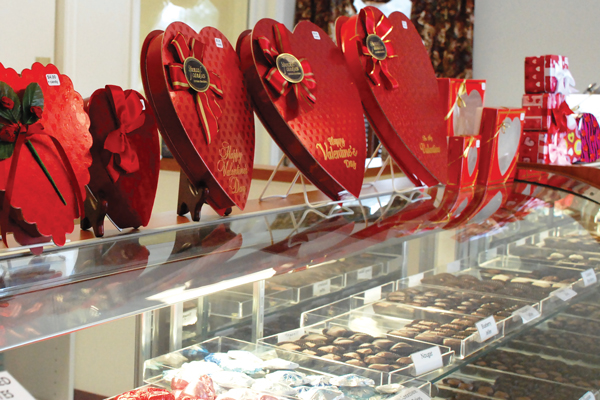 The story of Milton S. Hershey and his capitalization on milk chocolate is well known in this area, but he wasn’t the only chocolate maker to reap Pennsylvania’s rich abundance of fresh milk for his creations. In 1913, William and Frederick Klein left positions with Hershey and opened Klein Chocolate Company in Elizabethtown. According to local historians, the lure of fresh milk led the brothers to E-town where their “Lunch Bar,” a combination of milk chocolate and peanuts, gained fans and investors.
The fledgling company opened the doors for Mars, maker of M&Ms and Snickers, which took over the E-town factory in 1970 and fills the borough with the luscious aroma of chocolate.
The tradition of high-quality chocolates established by the Klein brothers lives on with Wendie Spence. Wendie, who learned candy-making from her mother and father while growing up in Kutztown, declares her chocolate uses secret Pennsylvania-German recipes that have been passed down from generation to generation. Originally started in Iowa by Wendie and her husband, Rob, Spence Candies moved to E-town in 2004. A building that once housed a gift shop was renovated to accommodate candy production and a retail shop.
Keeping with tradition, Spence uses local, fresh ingredients to create Butter Cream Croquettes, Caramellows and Cookie Butter Gems in small batches.

Lititz has been synonymous with chocolate since the early 20th century. Its annual Chocolate Walk event – held the Saturday of Columbus Day weekend – typically sees tickets sell out by Labor Day. Up until just a few years ago, any visitor within close proximity of the Wilbur Chocolate Company could get a noseful of the wonderful aroma wafting from the factory as it pumped out its popular Wilbur Buds – some say the predecessor of the Hershey Kiss – and other delights of milk and dark chocolate.
The Lititz factory along Broad Street is now closed and much of its production has shifted to other facilities. However, the parent company, Cargill, still operates a retail store in Lititz, where chocolate-making demonstrations are offered and candy to celebrate all the holidays and special occasions is sold – and, yes, where the famous Wilbur Buds are eagerly purchased by their fans.
The store is also home to artifacts from the Candy Americana Museum, which was started in 1972 by Penny Buzzard, wife of former Wilbur Chocolate President John Buzzard. Part of Mrs. Buzzard’s antique-show purchases and flea market finds – consisting of more than a 1,000 molds, tins and boxes – is on display, as are examples of early candy machinery, marble slabs, starch trays and copper kettles that were contributed by friends, and a selection from the 150-plus hand-painted European and Asian antique porcelain chocolate pots she amassed. 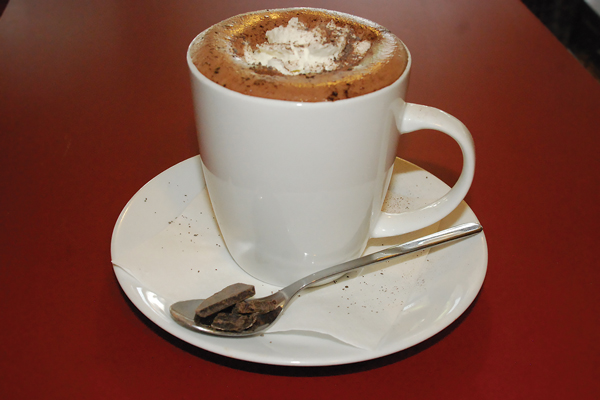 Along main street you’ll find Café Chocolate, where drinking chocolate is still king. Each hand-crafted drink is created fresh and fully customizable to each customer’s preference (a concoction called Frozen Hot Chocolate sounds intriguing). Café Chocolate, which has been owned by chocolate- lover Janice Dull since 2013, uses “high-quality, sustainable dark chocolate” to create its chocolate-based drinks, crepes, desserts, truffles, chili and other menu items. But before you indulge, be sure to savor their non-chocolate soups, salads, quiche and entrées such as salmon cake. The menu also offers vegan, gluen-free and sugar-free items.
It’s interesting to note that Lititz’s chocolate renown has attracted customers from the world of politics (Barack Obama, who stopped by Wilbur in 2008, while on the campaign trail) and the media (Mika Brzezinski from MSBNC’s Morning Joe, who was photographed at Café Chocolate for the cover of this magazine in 2011). I’m also sure that many musicians have sampled the delights of Wilbur and Café Chocolate while they were in town to visit Rock Lititz. As for me, I like The Turbo from Café Chocolate: classic hot chocolate with a shot of espresso. 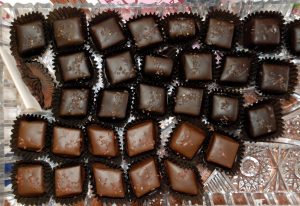 Lancaster City has been home to many small- to medium-size chocolate operations. The most recognized name is Miesse Candies, which was founded in 1875. With a focus on all-natural ingredients, like pure vanilla, real butter and fresh cream, the chocolates – then and now – are free of added preservatives, and in a nod to tradition, “fruits and nuts are hand-dipped the old-fashioned way.”
The Lancaster institution began when Daniel W. Miesse opened a shop on North Queen Street, selling candy, ice cream and baked goods, much of which he delivered by horse-drawn wagon. Miesse’s son, Roy, took over operations after studying confectionary production in France; his recipes are still used today.
Miesse Candies, which has been owned by Tracy Artus since 2011, has been a local favorite of chocolate lovers for over a century, but not without its share of tribulations. Chocolate lovers were dismayed in 2006, when fire ripped through the company’s small manufacturing facility in the city’s Cabbage Hill section. Employees escaped without injury, but the fire caused $2.25 million in damage. A year later, Miesse was back in operation. 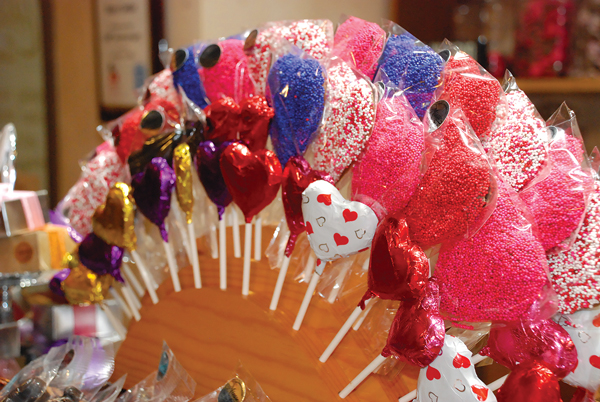 Miesse’s current location on Water Street opened in 2013 (tours are offered) and is joined by satellite locations at Overlook Town Center and Lancaster Central Market. Miesse’s ever-growing menu of treats – including chocolate and vanilla caramels, peanut butter cups and other novelties, as well as specialty items for weddings and other special occasions – is garnering a new generation of fans. My favorite is the Crisp & Chewy assortment. 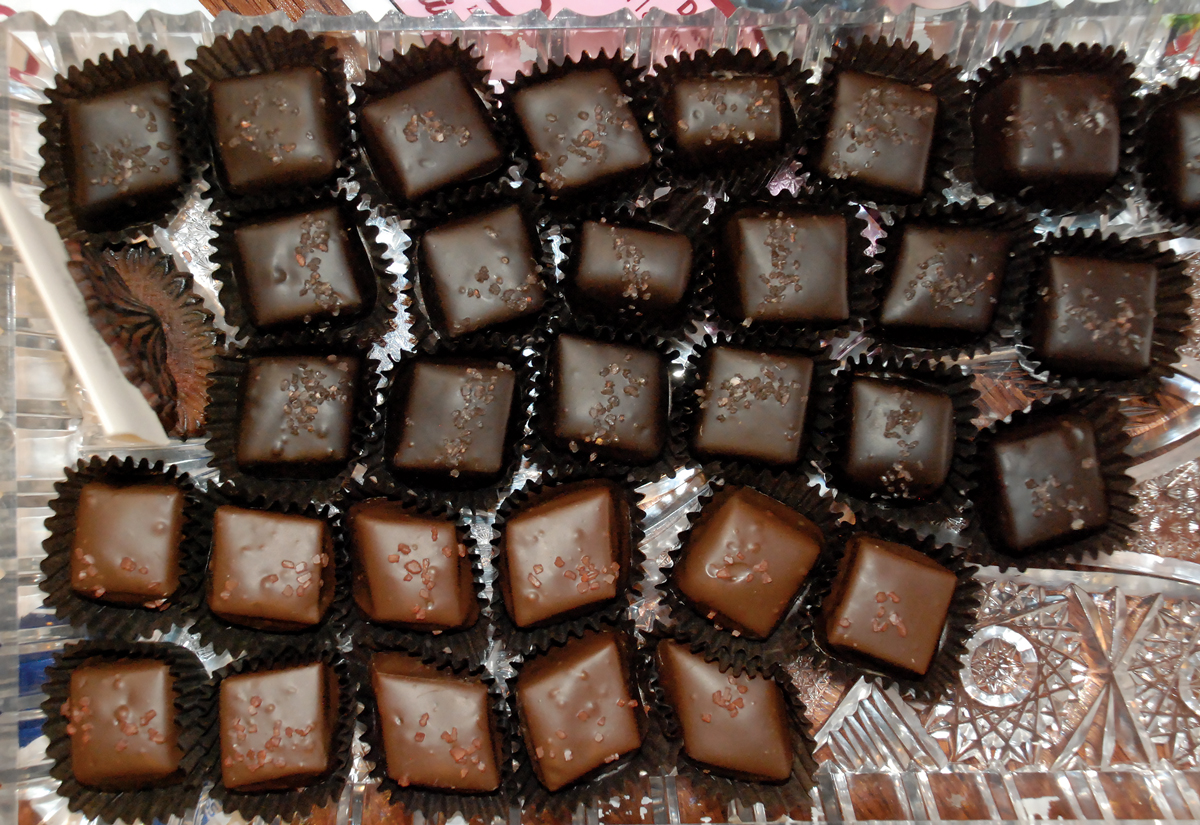