Low, mat-forming ground cover can serve as an alternative to turf, fill in the gaps between stepping stones, and beautify the problematic areas under trees and shrubs.

Readers who garden on larger properties are always looking for interesting ground-covering plants to reduce maintenance, cut back on turf and perhaps offer colorful flowers or interesting foliage. Likewise, gardeners with townhouse or patio gardens can add some punch to their displays by planting low-growing, spreading plants between stepping stones and pavers, under shrubs, and in the otherwise bare ground under shade trees. I have grown the following selections for many years. 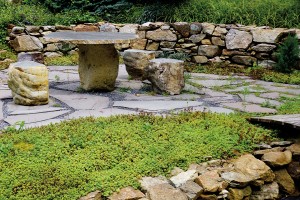 One of my favorite low-growing plants are the sedums, sometimes called stonecrop. There are many available, but I can confidently recommend several. I’ve had no deer or rabbit damage and they will grow under black-walnut trees. Seek out the following:

Another weed-smothering sedum that I’ve grown for years is Sedum spurium ‘John Creech’. Its small, scalloped, green leaves are topped with rose-pink flowers in late summer and fall. It is hardy, vigorous and gorgeous. An ideal choice for green roofs, rock gardens, and around stepping stones and rocks. To brighten up a corner, try Sedum rupestre ‘Angelina’. This quick-spreading ground cover has needle-like foliage that emerges chartreuse and then turns golden-yellow. In fall, it turns shades of orange and red. 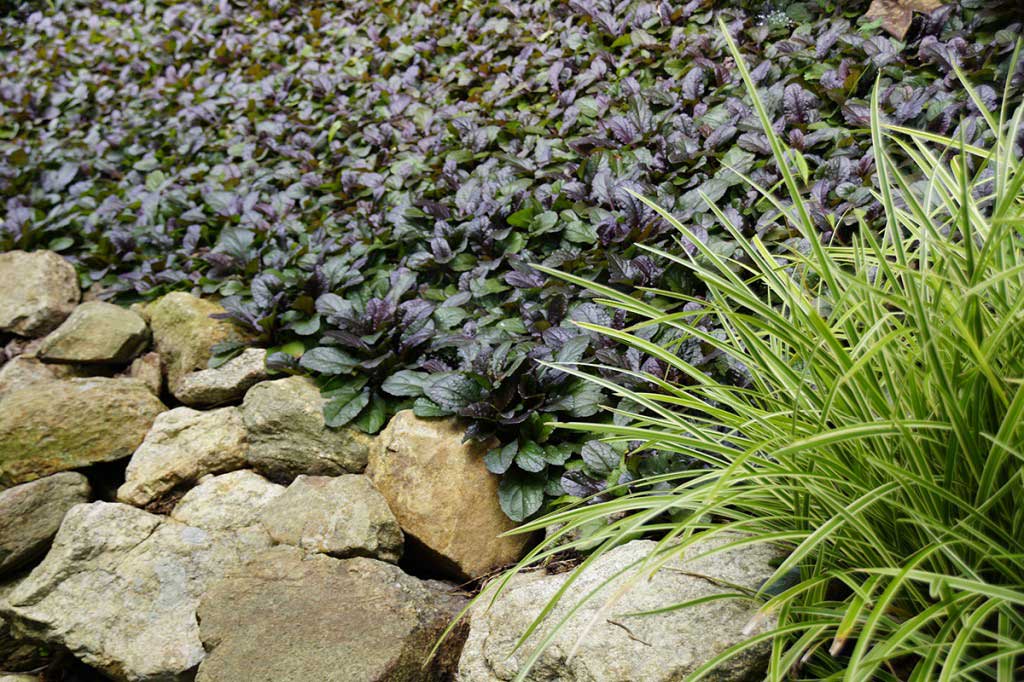 Doubtless, many gardeners consider ajuga to be a weed (that is, if you deem growing turf gardening). Admittedly, ajuga can be quite aggressive because of its spreading nature; when planted in perennial borders, it will make its way into the lawn. But, when planted thoughtfully, it is an invaluable Ω even highly ornamental Ω old war horse from the mint family. Bugleweed will grow in sun or shade, and tolerates moist but not water-logged soil. It is a good choice for those gardeners with frustrating clay and heavy soils. The species’ foliage is shiny and dark-green, but purple, bronze and variegated cultivars are widely available. All are showy in spring with vivid, dark-blue flowers and some cultivars have purple, pink or white flowers.

And, how can a gardener scorn a plant that rabbits and deer don’t touch and will even grow under black-walnut trees? I consider ajuga a desperation plant. It will fill in large shady areas where lawns are difficult to establish and can also be planted on banks or slopes, under trees or around shrubs. Spring bulbs such as snowdrops will mix in well.

Perhaps the most useful selections for covering a larger spot are ‘Atropurpurea’ and ‘Bronze Beauty’, which have dark-purple foliage. For smaller areas Ω for instance between stepping stones, or in a trough or rock garden Ω I am smitten with the adorable miniature Chocolate Chip or the unusual coal-black wrinkled ‘Metallica Crispa’.European Ginger

There is no lack of choices for shady areas. Perhaps the most elegant plant I can recommend is European ginger, Asarum europeum. It thrives in shady areas and is primarily grown for its glossy, leathery, heart-shaped, dark-green leaves, which remain evergreen in mild winters. The flowers are hidden by foliage and are not showy.

This very refined (and sometimes costly) plant takes time to establish but will flourish in humusy, slightly acidic, consistently moist and well-drained soils. The seeds are carried around by ants, and I am always pleased when it pops up here and there in the garden. It is easily transplanted in spring. The roots have a mild ginger aroma. It is not browsed and will grow under walnut trees. 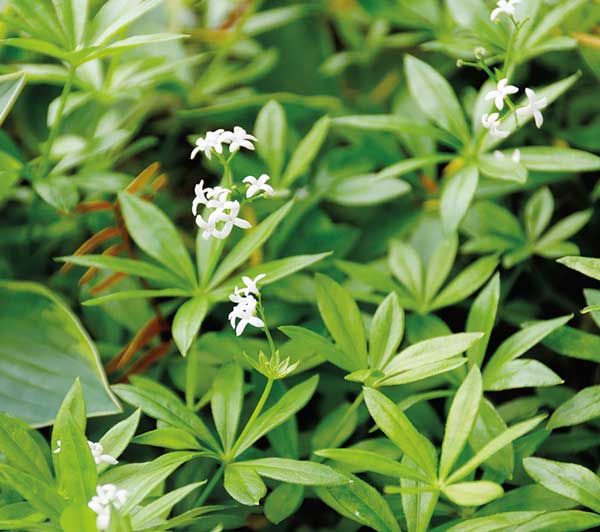 Also doing well in partial to full shade is the old-fashioned sweet woodruff, Galium odoratum. It will be dormant over the winter but quickly emerges in the spring, making an attractive ground cover as it spreads by both creeping roots and self-seeding. The flowers in May are white and very showy. The plants emit a strong odor of freshly mown hay when the foliage is crushed or cut. The aromatic intensity increases when dried, thus dried leaves are popularly used in sachets or potpourris. Its pressed foliage was used by German colonists to scent linens (in German it is called “waldmeister,” which translates as “master of the woods.”) Plants have also been used commercially in perfumes. The leaves are sometimes used to flavor teas and cold fruit drinks. It has traditionally been used to make May wine, a punch made from white wine flavored with woodruff, orange and pineapple.

For those who favor native plants, a good choice is Golden-star, Chrysogonum virginianum, a member of the daisy family, which is native from Pennsylvania to Florida but is now considered endangered here. It forms dense mats of grey-green, softly hairy foliage, and displays bright-yellow flowers in spring and sporadically throughout summer in sun or part shade in average soil and moisture. It makes a fitting ground cover for woodland gardens, native-plant gardens or naturalized areas, and a nice-looking edging for woodland paths. Golden-star also could be used in shaded areas of border fronts or rock gardens.

A little treasure that is very effective between stepping stones or in rock gardens is Mazus reptans, simply called mazus. I have seen it many times in public gardens, but I think it is underused and very useful in home gardens. Tiny mazus is easily grown and spreads very rapidly to form dense mats if kept moist (but not wet) in average or even heavy soil. It thrives in sun to partial shade and displays tiny, purplish-blue, tubular, two-lipped flowers with yellow and white markings in small clusters in late spring to early summer. There is also a white cultivar. Mazus tolerates limited foot traffic and is an excellent ground cover for areas where it can be left alone to spread or naturalize, such as banks, woodland gardens, along paths, or in moist areas near water gardens or along streams, pools or ponds. 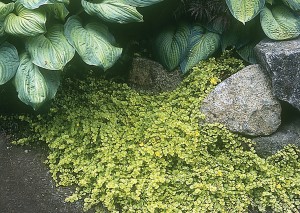 For colorful foliage punch, consider Lysimachia nummularia ‘Aurea’, commonly called Golden Moneywort or creeping Jenny. It is easily grown and vigorous, forming dense low-growing, creeping mats of brilliant yellow to chartreuse foliage. Profuse, cup-shaped, bright-yellow flowers appear in early summer. Unlike my other recommendations, creeping Jenny will tolerate saturated soils, making it a good choice for heavy, poorly drained soils. Naturally, it will not tolerate drought. It will brighten dull areas but can spread aggressively. It can be planted to cover or spill over stone walls. An interesting selection for hanging baskets, it is valuable for under planting, and draping over edges of containers and trough gardens. The yellow foliage provides excellent contrast and color for shady areas.

Another tough, underused plant is the so-called barren-strawberry Waldsteinia ternate, which features strawberry-like leaves arranged in rosettes, five-petaled, strawberry-like, yellow flowers and inedible berries. It spreads to form dense, compact carpets of foliage with yellow spring flowers in full sun to part shade. It is not fussy about soil.