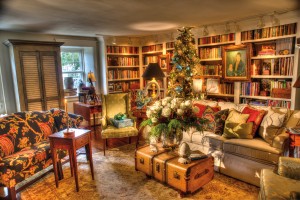 The living room reflects Kerry and Mark’s many interests: books, art, antiques and the decorative arts. The tree is trimmed in colors and ornaments that echo their love of the ocean. A large mercury-glass vase of white roses, magnolia leaves and greens sits atop a suitcase that once belonged to the silent-film star, Lillian Gish. Kerry transformed it into a coffee table.

Denver-born Kerry Kegerise spent his childhood in Kentucky and young-adult years in the Chicago area. But, in his heart, he always wanted to move back home to Lancaster County.
After earning a degree in healthcare administration, Kerry made his way back to Lancaster and a job at a local hospital. Several years later, Kerry’s career path took a detour. His goal was to own and operate his own business. An interest in floral design provided him with a premise. “My family thought I was crazy,” he admits. Kerry’s grandfather, however, had a different opinion and encouraged him to pursue his dream. So, he bought out a shop on Main Street in Denver and opened Country Lane Flowers. “I had no formal training,” he says. “I just liked working with flowers.” The naysayers even pitched in to help Kerry with the business. Still, even after 30 years, Kerry can remember how challenging it is to be a first-time business owner. “Many weeks were soup weeks,” he recalls.
Luckily, Kerry found a silver lining. Bill Donecker, whose multifaceted shopping mecca in Ephrata was slated to grow with the addition of The Artworks and adjacent Farmer’s Market at Doneckers, encouraged Kerry to open a stand in the former shoe factory. Kerry’s wreaths and floral arrangements became a hit with customers. The enterprise was so successful that Mr. Donecker made a quaint stone cottage near the store and restaurant available to Kerry. Through Doneckers, he moved into creating designs for upscale weddings and other functions.
Three years ago, Kerry realized another dream when he and his partner, Mark Clark, purchased a historic property on the edge of Denver. Ironically, Kerry used to play there as a child. “I’ve always loved it,” he says. “I dreamed of owning it one day.” A mill on the property dates to 1739. Denver’s history predates that by only four years, when the area was settled by Swiss immigrant Hans Bucher – hence Denver’s original name, Bucher’s Tal.
Built by Michael Bear, the mill initially functioned as a sawmill. By the 1800s, it served as a grist mill and was known as Union Mill. A fire damaged the stone structure in 1850; in an effort to salvage it, the third floor was razed.
“Union” was a reflection of Denver’s then name, Union Station. Residents tired of living in a town whose name referenced its train station and began a movement to change it. A young man by the name of Adam Brubaker took it upon himself to research post-office records and was enamored of the name “Denver.” There was only one other town in the country with that name and it was in the Rocky Mountains of Colorado, so it was assumed little confusion would arise. Townspeople liked the suggested name and on November 1, 1881, Union 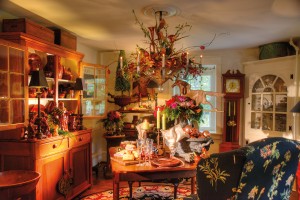 The cozy dining room holds more treasures, including a signature quilt (not seen) from Mark’s family, a redware-filled cupboard and a chandelier made by Denver tinsmith Charles Messner. In decorating the room for the holidays, Kerry utilized shades of red and pink for the floral arrangements that top the tables and are nestled in the chandelier. Note the pink-hued ornaments that fill a garden urn.

Station officially became Denver, Pennsylvania.
The mill’s name changed, as well, to Denver Mill. In addition to functioning as a mill – operations ceased in 1924 – the building was the site of the county’s first cold-storage facility. The enterprise not only rented cold-storage units to townspeople, but its owners sold blocks of ice via a horse-drawn wagon. “It was in business for 100 years,” Kerry notes.

The house – Denver’s first – was built in 1769 and was simply referred to as the “white house” by townspeople. The house was owned by three different generations of Bears over the years. The most recent owners were Elizabeth and Richard Cramer, who operated an antiques business in Missouri, and bought the property in order to have access to East Coast antiques shops and auctions. When they passed away, their daughters put the property on the market and Kerry made an immediate offer.
The Cramers had meticulously restored the house, plus built an addition that contains a solarium-like room on the first floor and a large master bath on the second. “I didn’t have to do a thing,” Kerry says of its move-in-ready condition.
The property is part of the Bucher Tal Historic District, which was named to the National Register of Historic Places in 1987.
Decorating the house was a joy. Kerry defines his look as “traditional mixed with things I like.” Thus, furnishings that include family heirlooms, plus purchases made at Doneckers and through auctions, mix with collections of redware from Ned Foltz, art, books, finds (such as suitcase that belongs to silent-film star Lillian Gish) and family mementos, including photos that date back to the Civil War. 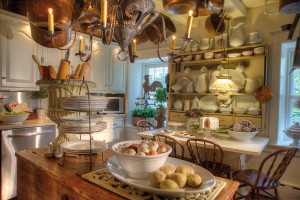 The remodeled kitchen pays homage to Kerry’s roots: The chairs were a wedding gift given to his great-grandparents, while the white stoneware belonged to his grandparents.

At Christmas, the décor engages all the senses. Magnolia, which is ordered from a source in the South, is used as the foundation for floral arrangements, swags and other design elements. Magnolia and eucalyptus fill the house with an earthy, intoxicating fragrance. Florals such as roses and tulips add an elegant touch. Non-traditional colors such as turquoise and pink provide the element of surprise where ribbon and tree ornaments are concerned. All must be in place by early December – the house fills with holiday music to put Kerry in the Christmas spirit – to ensure he will have the time to transform the homes of clients, as well as plan and host his annual holiday party.

Kerry purchased the property with the intent of moving his business into the mill. He also opened an antiques shop on the second floor. Now, Kerry’s career is taking yet another detour. Noting that smaller weddings are becoming a trend, Kerry looked at the mill in an all-new light. “It’s the perfect setting for more intimate events,” he says.
After being green-lighted by East Cocalico Township, Kerry has been working on turning the property into a bridal fantasy. The tree-filled portion of the property that is bounded by the Cocalico Creek has been thoroughly manicured. Kerry plans to set the mood by uplighting all the trees.
The mill itself will be transformed into a multifaceted venue that will feature a pub, lounge and second-floor ballroom. Verandas will expand the space. A period-looking cottage will be built to house Kerry’s floral-design business. An area is also being landscaped – patios and walkways are being reworked, using flagstone pavers and millstones – for outdoor ceremonies. Brides will have access to the first-floor solarium in the house. (Dwight Graybill of Cocalico Builders is the general contractor for the project; Bill Donecker is serving as a consultant.) Kerry plans to unveil Bear Mill Estate next summer. 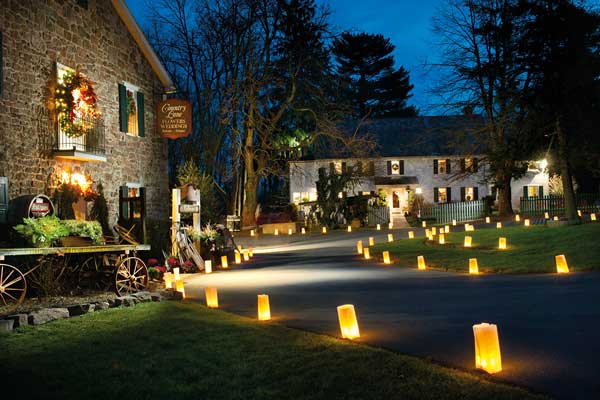 Prior to his annual holiday party, Kerry Kegerise decorates his home inside and out. On the evening of the party, he lines the driveway and walkways with luminaries.