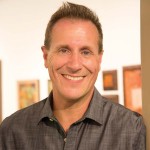 Cle looks around the building on South Second Street that sits just a few doors down from the historic Wright’s Ferry Mansion. Windows on the upper floor provide views of the Susquehanna River. The purpose of the building seems to always be evolving. Appropriately, it mirrors the fact that Columbia is in the midst of recreating itself, all the while it embraces its past. “I think we’re at the point where we are accepting Columbia’s history, and by that I mean all of it: the good, the bad and the ugly,” Cle maintains. “I feel like we’ve been climbing a hill for what seems like forever,” he says of Columbia’s search for an identity. “But you know what? I think we’ve finally crested the hill. Change is in the air. People are excited about what’s happening.” Indeed, walk around Columbia, and signs in vacant buildings announce what’s on the horizon.

Ever the entrepreneur, Cle has taken the Garth Frame Shop beyond his wildest dreams. Garth now stands for a collective enterprise that encompasses a frame shop, art gallery, café, community gathering place and events venue. 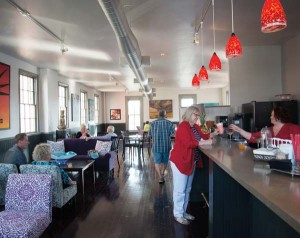 Originally a five-and-dime store, its owners rented the upper floor to the American Legion for $1 per year. Cle’s great-grandfather, along with Gen. Edward Shannon (another Columbian), founded the Amerian Legion in Paris in 1918. “To know that my great-grandfather once walked around this building is very special,” Cle says.

“Columbia was a great place to grow up,” Cle reminisces. “All the neighborhood kids played together. I remember how happy I was to finally get permission to ride my bike to Locust Heights Swimming Pool.” His parents’ words of warning stay with him to this day: “I might not see what you’re up to, but someone will.”

A graduate of Columbia High School, Cle attended the York Academy of the Arts, majoring in commercial advertising. After graduating, he moved to New York where he was a model, bartender, bouncer and graphic designer. By 1987, he was considering his next move. “I had given myself a five-year window to make it in New York,” Cle says. “I decided I had met too many people who were still waiting for their big breaks. That wasn’t for me. I had a good run, had a lot of fun and met a lot of people. Still, you’re always reminded of how special home is.”

Cle packed his bags and came home to Columbia. He married a Columbia girl (he’s single once again), bought an old house on Chestnut Street (it’s a work in progress), and opened a framing shop in the basement. He also became active in the community by serving on boards and committees dedicated to Columbia’s revitalization, as well as the borough’s zoning board and city council. He became one of Columbia’s most vocal and dedicated advocates.

Then, he took a break to concentrate on his own business. “I really wanted to get out of the basement,” he says. A friend owned the building at 22 South Second Street and offered Cle a rent-to-buy proposal. Cle jumped at the opportunity. In addition to framing, he began hosting exhibits of both established and up-and-coming artists. It became a Fourth Friday hot spot. The café and events venue spun off that success. 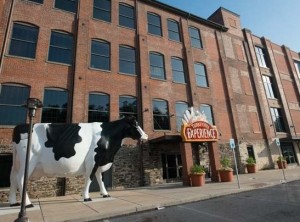 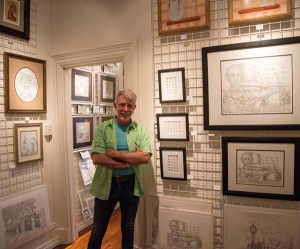 The work of artist Dale Weibley is exhibited at the Jonal Gallery, which he owns with his husband, John Novak. 653 Locust St. Jonalgallery.com.

It seems good things are coming Columbia’s way, too. It began with the Turkey Hill Experience, which attracts tourists and locals alike and provides a unique gateway from the north. Instead of seeing a blighted factory building, visitors can see adaptive reuse at its finest. Antiques shops have popped up on that side of town, most taking over vacant buildings that once served other purposes.

Artists have also discovered Columbia. “We have seven galleries of varying levels,” Cle reports. “Art and antiques have created a nice mix. We’re in our fifth year of Fourth Friday and like all things, it’s taken time for it to become a success.” A Facebook page, Create Columbia, has generated lots of buzz. “It’s exciting to have so many creative people settling in Columbia,” he observes.

Then there’s the river. “Columbia is really the only borough in Lancaster County that has access to the Susquehanna River,” he says. “Finally, we’re taking advantage of it.” He’s referring to Columbia Crossing, the beautiful visitor’s center and park area that sits in the shadow of the Veterans Memorial Bridge. The center provides access to the Northwest Lancaster County River Trail. A few miles south of town, at Turkey Hill, you’ll find the popular Enola Low Grade Rail Trail.

For being a sleepy river town, Columbia has certainly been a player in this country’s history. The tagline of Columbia’s latest visitor’s brochure – Museums, Treasures & Riverlore – says it all: “With a history that includes smuggling slaves, running whiskey, and burning our own bridge, you know you’ll have a good time.”

Columbia’s history dates to 1726, when Quakers from Chester County arrived on the shores of the Susquehanna. John Wright established the first commercial ferry service along the river, which inspired the town’s first name, Wright’s Ferry. The Wrights, as well as other Quakers, played an integral role in helping escaped slaves make their way along the Underground Railroad.

The Civil War would have crossed the Susquehanna River were it not for Union troops and townspeople purposely burning the covered bridge that connected Columbia and Wrightsville. A week later, the Battle of Gettysburg was waged.

Throughout the 19th century, Columbia played a major role in the industrialization of America. Manufacturing and transportation (the railroad and river traffic) made Columbia a vital part of the nation’s economy.

Getting to Know Columbia

Samuel Wright proposed the name “Columbia” in 1788. It honors Christopher Columbus. The name was officially adopted a year later.

The name change was part of the ploy to have Columbia become the nation’s capital. Alas, members of Congress voted, and Columbia fell one vote short to the swampland along the Potomac River that was christened Washington, D.C. (ironically D.C. stands for District of Columbia). Another close vote saw Columbia lose out to Harrisburg as Pennsylvania’s state capital.

Spend any amount of time with Chris Vera, the director of the Columbia History Preservation Society, and you’ll discover just how fascinating history can be. According to Chris, Columbia just might qualify as “grand central” for the Underground Railroad. He credits Stephen Smith and William Whipper (two black businessmen) for the role Columbia played in helping escaped slaves make their way to Canada. “They had the money, power and means to make people disappear,” Chris explains. By the way, Chris leads Underground Railroad walking tours of Columbia. They are offered Saturday and Sunday by reservation only. Call 572-7149 or visit columbiahistory.net.

In June 1863, Columbia was instructed by the Federal Government to use any means necessary to hold the covered bridge that spanned the Susquehanna between Columbia and Wrightsville. The government ensured its restoration or replacement should it be necessary. “We’re still waiting,” Cle remarks, referring to the June night the bridge was burned in order to thwart the advancing Confederate troops. “The last time the measure came to the floor [of Congress] was in the 1920s, and it was tabled,” Cle reports. So Columbia has an idea: Reimburse the town for its bridge, and they will use the funds to build a pedestrian bridge atop the bridge supports that remain in place. “It would connect the trails that travel through York and Lancaster counties,” Cle says.

Cle calls the real estate scene “amazing” and reports that inventory ranges from historic properties (Federal to Victorian) to row homes and mid-centuries on the outer edges of town. “If you’re into history, old homes, great architecture and are willing to take a chance on a town that’s growing, Columbia is for you,” he says. Admittedly, because Columbia is “land locked,” the tax base cannot expand, which challenges services and the school district. Cle, who is once again a member of the city council, hopes an increase in tourism and entrepreneurism can aid the cause.

Columbia is served by the Columbia School District (Park Elementary, two middle-school campuses and Columbia High School). A private school, Our Lady of the Angels, is also located in Columbia. 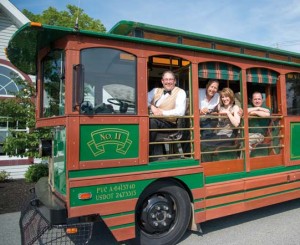 Let the Driving to Us

See the town via a trolley, which is operating thanks to a partnership between the Susquehanna Valley Chamber of Commerce & Visitors Center and Columbia Borough. The restored Victorian-era trolley is operated by RiverTowne Trolley Co., which is owned by Andre and Kelly Underhill. The trolley stops at 10 attractions. Tour guides are on board to share information about the town’s history. Days/hours of operation: Thursday-Saturday (through September 4), 10:30 a.m.-4:30 p.m. All-day access is available for $2. Parivertowns.com for details.

Galleries, studios, antiques shops and specialty stores stay open late on the fourth Friday of each month. Parivertowns.org or 684-5249. July 23-September 17 Lecture Series Each Saturday, the Columbia Historic Preservation Society will offer a lecture. Topics will include September 11, 1777, The Christiana Riots and The Colored Troops in the Civil War among others. Banner Hall, 21 N. Second St. Columbiahistory.net.

A craft beer, food truck and musical extravaganza! Nearly three dozen micro- and craft breweries are expected to participate in the celebration of Columbia’s brewing heritage. Tickets are $40. Locust Street from Second to Fifth streets. 12-4 p.m. Parivertowns.org or 684-5249.

Create Columbia is hosting this event that will bring Clarksdale, Mississippi’s tour de force of raw blues, Anthony “Big A” Sherrod, to the upper floor of Columbia Kettle Works for an evening of music. Beer and Cajun food will be available for purchase. Over 21 only. 40 N. Third St. 6-10 p.m. For details, visit Facebook.com/CreateColumbia.

Feet in the Street Art Show

Tour guides will share stories of those who are interred at historic Mt. Bethel Cemetery. 650 Locust St. 7-10 p.m. Reservations required. 684-6196. 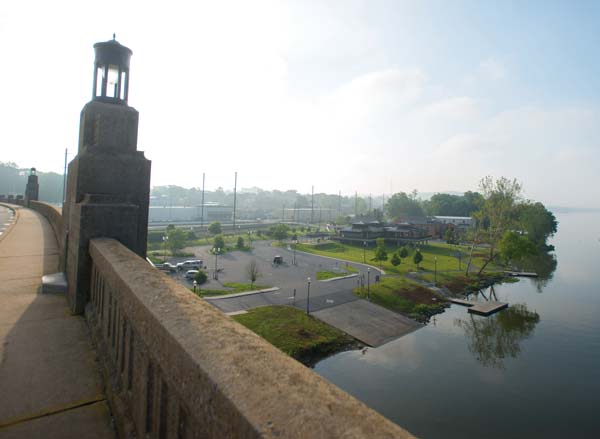