Are you looking for a fun and entertaining place to grab some breakfast or lunch and do some shopping for Saturday night’s dinner? If so, head for the Columbia Market House, where you can enjoy a bite to eat while listening to piano music or playing a game of chess or checkers. If you’re feeling brave, you can tour the market’s dungeon. Finally, you can assemble the ingredients for that evening’s dinner or buy a hostess gift for the dinner party you’re attending. 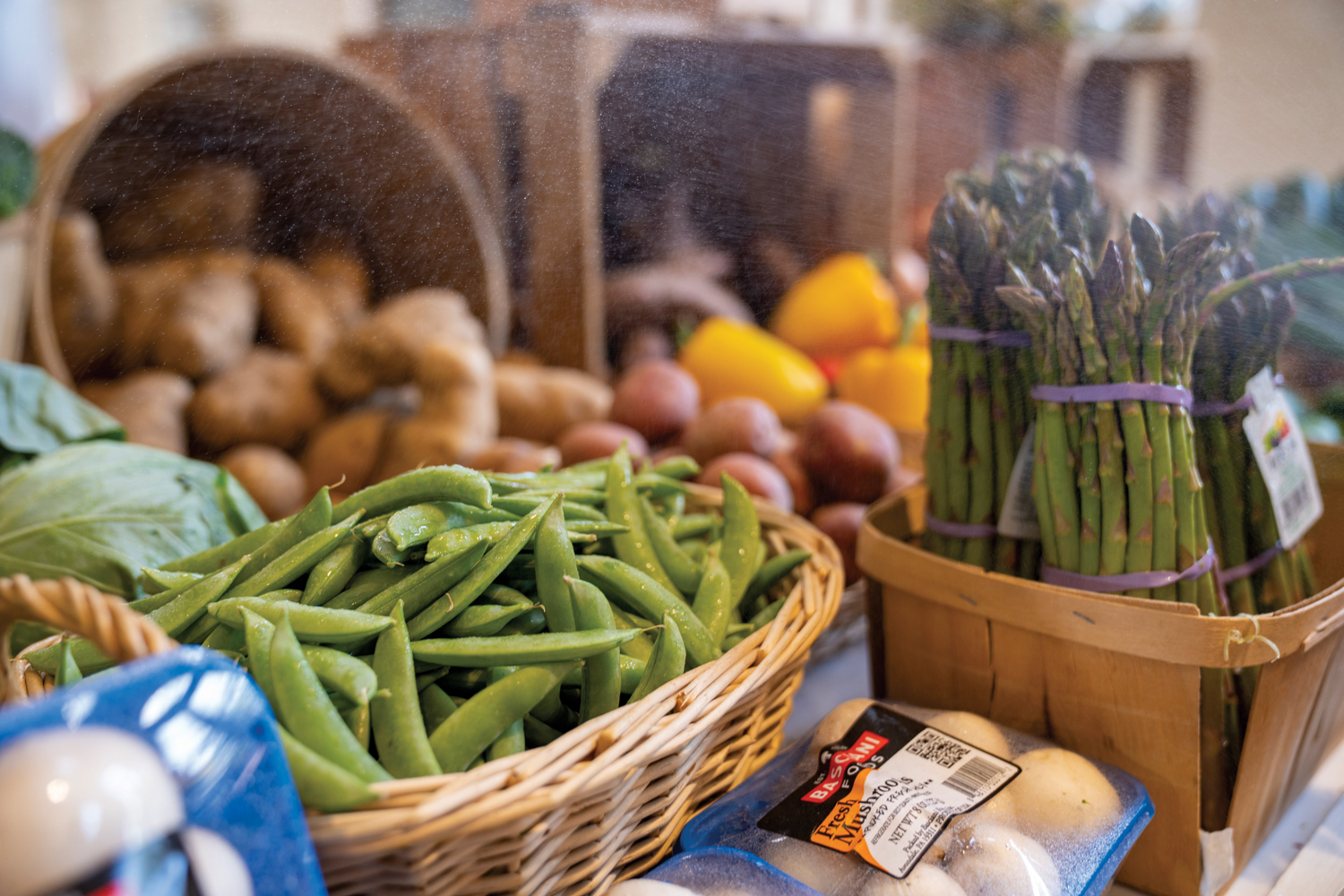 Fresh produce from Isidore & Maria’s, which offers a $20 fill-a-box promotion.

For Chris Vera, the new manager at Columbia Market House, the historic building at 15 South Third Street is all about community. “I believe this market is a community building,” he says of the facility that is owned by Columbia Borough and was beautifully renovated prior to its grand reopening in May 2021. “It’s a farmers market on Saturdays, but it can serve as a place for community events,” he explains, adding that private celebrations can be held there, as well.

Chris proudly proclaims that he represents the second generation in his family to serve as market manager. His mother, Renae Sears, not only had a stand at the market, but she also served as its manager. “I worked at my mom’s stand as a kid – she had a hot dog stand and I would make Bachman’s pretzels to sell. When it closed in the early ’90s, her dream was to reopen this market. She was able to fulfill that dream and now I’m following in her footsteps,” Chris says, noting the family’s next generation is involved, as well. “I have a niece, Lauren Schoenly, who’s a standholder.” 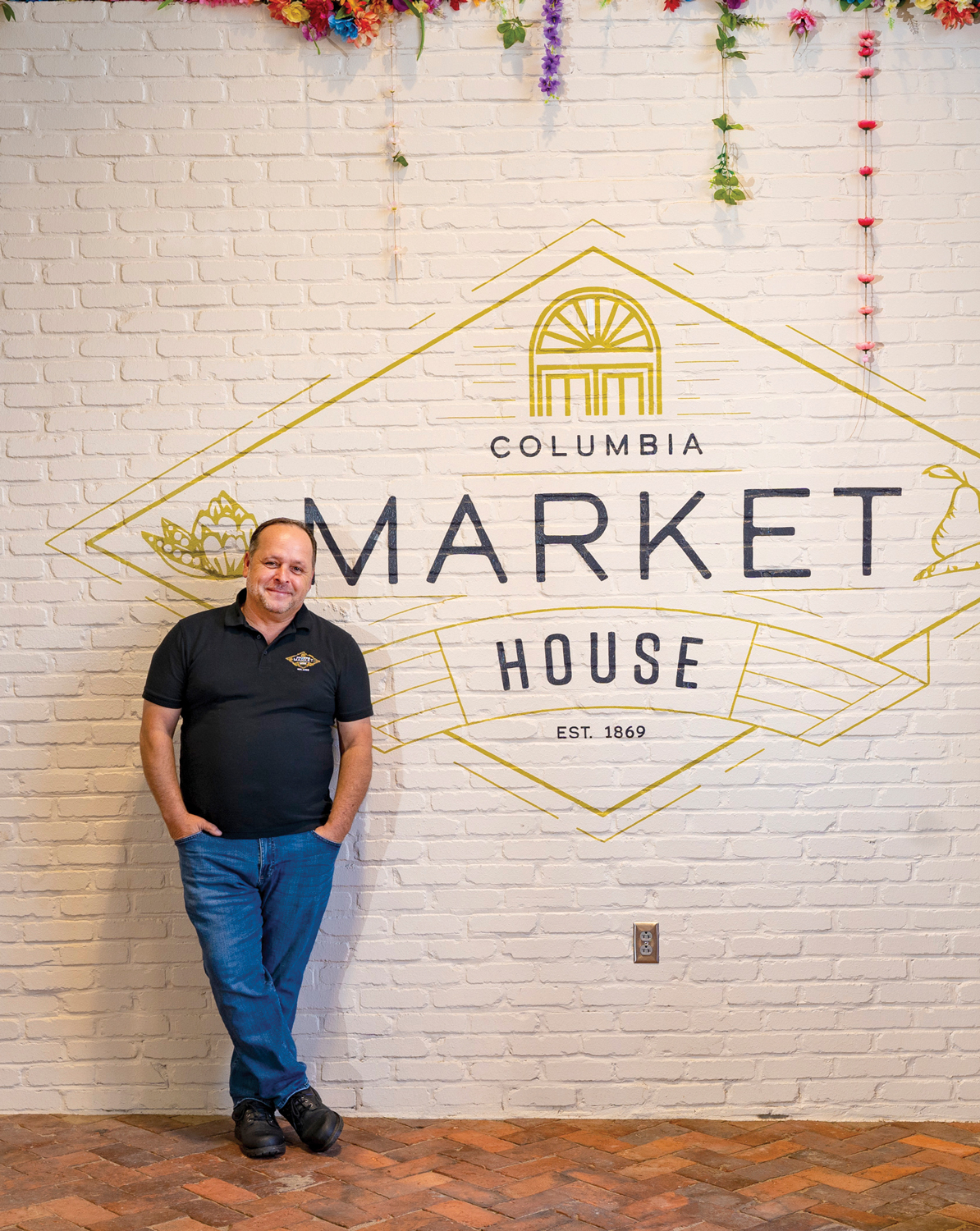 Chris Vera followed in his mother’s footsteps when he was named market manager in July.

As market manager, Chris can share his other passion – history – with visitors. Built in 1869 on the site of an earlier open-air market, the market house features a large and open interior. Look up and you’ll notice the arched Howe trusses that mimic those used in railroad bridges during that time period. While the market is rooted in history – remnants of the original brick flooring can be seen in some areas of the building – the renovated interior looks right at home in the 21st century, as it’s flooded with natural light thanks to both tall and clerestory windows, as well as the massive doors that are topped with windows. The white interior further enhances the bright and airy feel. Tables and chairs fill the central portion of the space, while vendor stands encircle the seating areas. 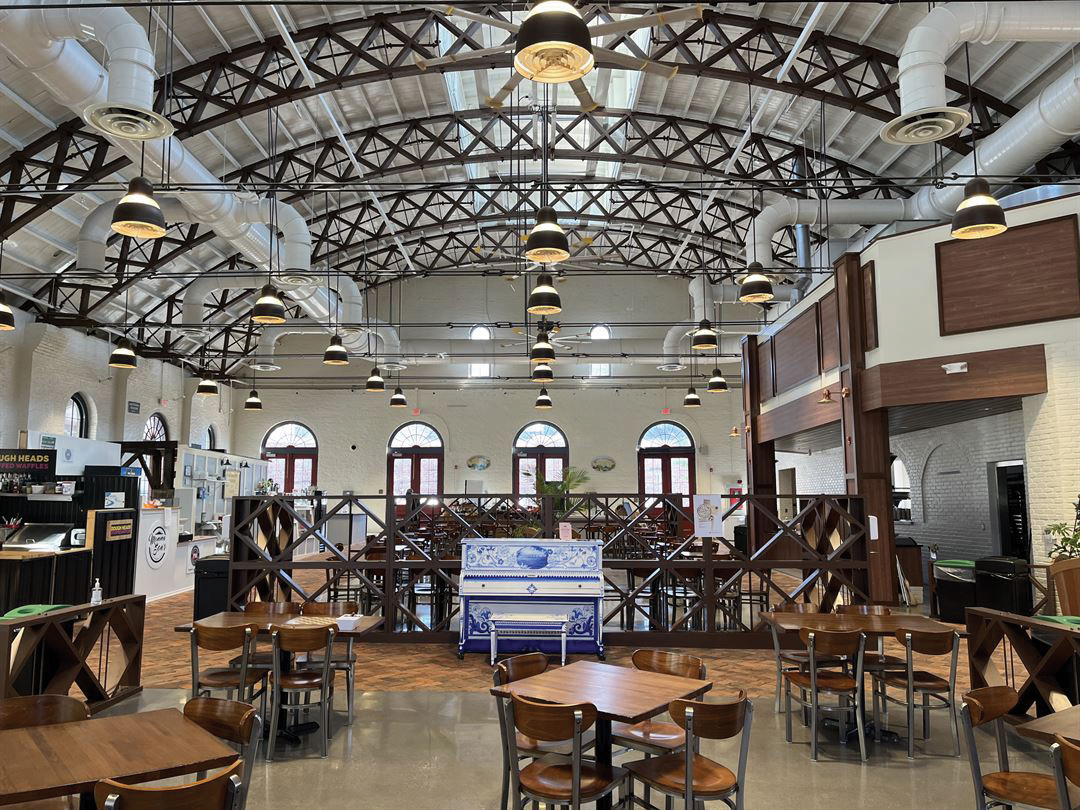 The central portion of the market house is devoted to seating, while its outer rim is encircled by vendor stands. Photo courtesy of Columbia Market House.

Adding to the ambiance is a hand-painted upright piano courtesy of Create Columbia (Janette Toth-Musser was the artist). Chris says sometimes people – Danielle Holsinger, for example, is a regular – will play it on market day. “What I love about this market is that people talk with one another. The chatter of voices is the best sound you can hear. The piano music doesn’t overpower that,” he says.

The market house also has a unique attraction – a jailhouse dungeon that was added to the lower level in the late 1800s. “The dungeon’s cells were used to temporarily house prisoners; it eventually closed in the early 1900s,” Chris says. Since then it’s been the source of scary tales and paranormal sightings, which is yet another of Chris’ interests. “I give tours of the dungeon on Saturdays from 9 a.m. to 2 p.m.,” he reports. 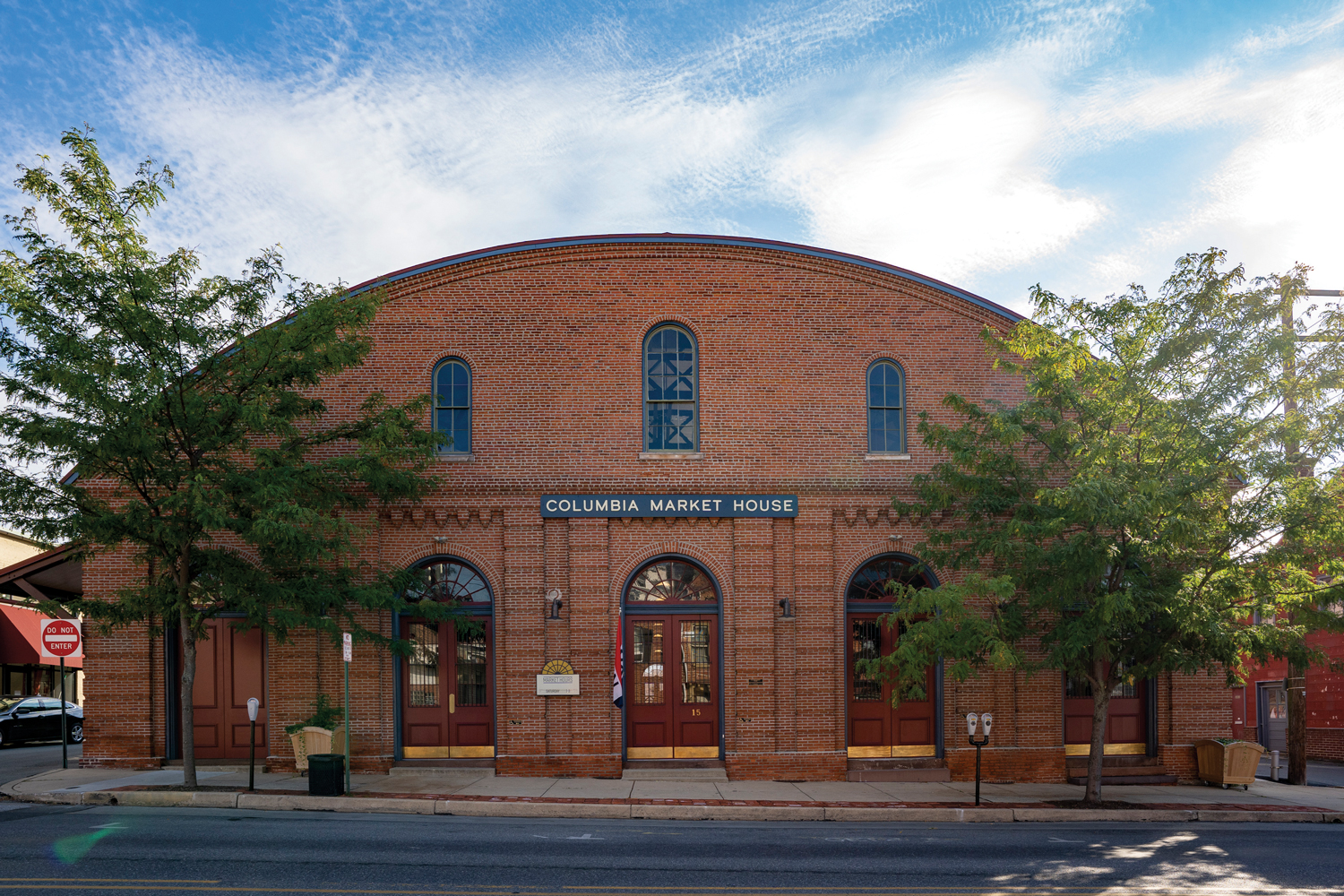 The market house dates to 1869. In the late 19th century, jail cells were installed in the basement of the building. Market manager, Chris Vera, provides dungeon tours on Saturdays from 9 a.m.-2 p.m.

When the 9,400-square-foot market opened in 1869, and for some time afterward, it was home to 180 indoor stalls and 37 outdoor stalls that were protected by the projecting roof. “At that time there were no grocery stores or supermarkets, so this is where people bought their food – it was basically the biggest grocery store in town,” Chris says. “And, Columbia was a busy town; there were five different railroad lines coming through town. Columbia was the industrial hub of the county.”

The success of the market was not destined to last. Conveniences such as modern grocery stores prompted consumers to change their shopping habits. After several attempts to rebrand itself, the market closed at the end of 2017 to prepare for its next chapter. After an extensive construction and renovation project, it reopened in May 2021, at which time it was managed by CHI St. Joseph Children’s Health. The organization left that role in June (2022). 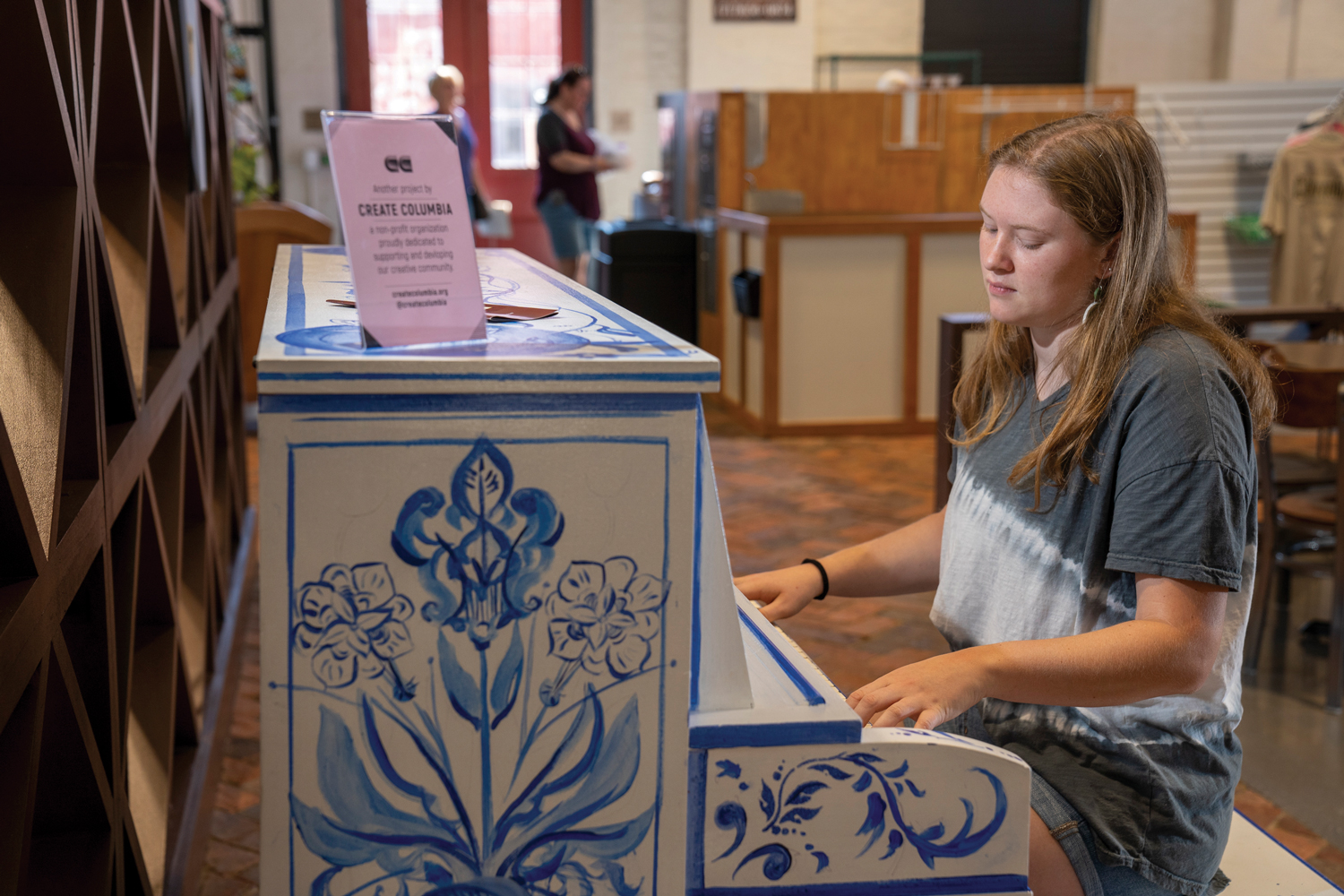 Danielle Holsinger often stops by the market house on Saturday mornings to play the piano that was a project of Create Columbia.

Chris, who also serves as president of Columbia Historic Preservation Society and Museum, began serving as market manager in July. “I want to bring back the farmers market feel of the past. I want people to walk this market – you can buy the ingredients for your dinner here, and do it at an affordable price,” he stresses and points to the “sharing box” that is available at Isidore & Maria’s. Customers fill a box with vegetables and fruits for $20. “It may be too much for your family, so you can share it with friends, neighbors or extended family members,” Chris remarks. 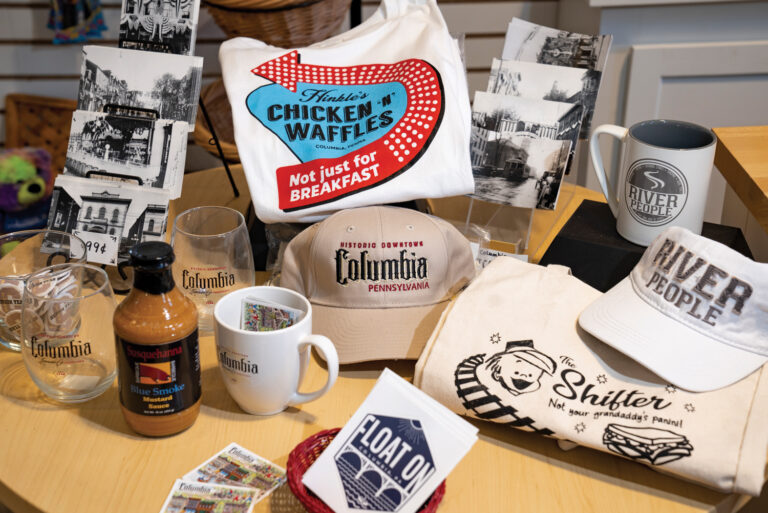 Murphy’s Mercantile offers T-shirts, hats and other items that relate to Columbia and the Susquehanna River. 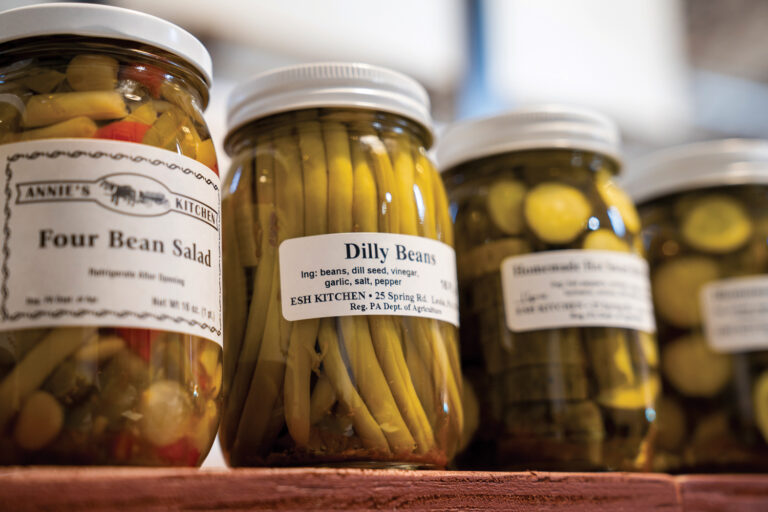 Loreto’s offers its famed family recipe for Italian gravy/sauce, as well as items such as pasta. 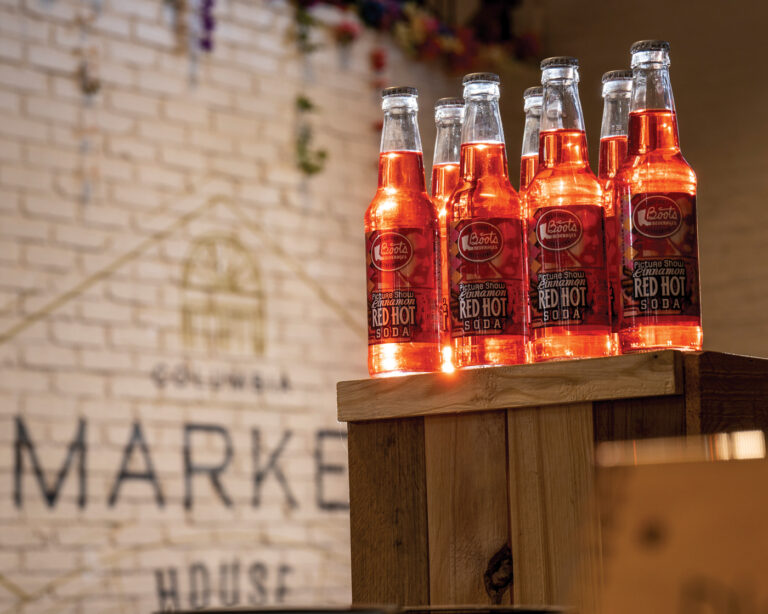 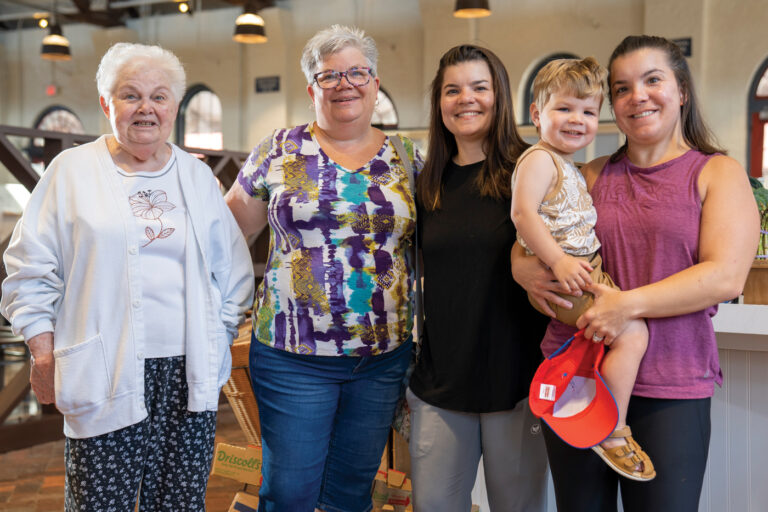 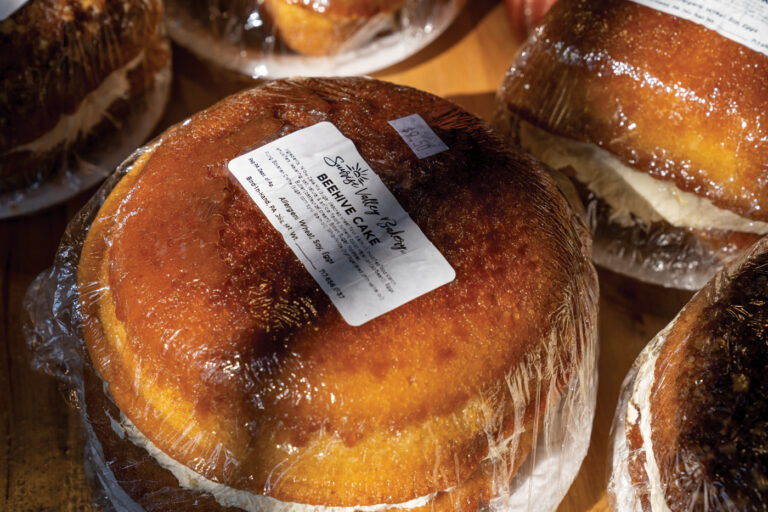 A beehive cake from Lantz’s Goodies. 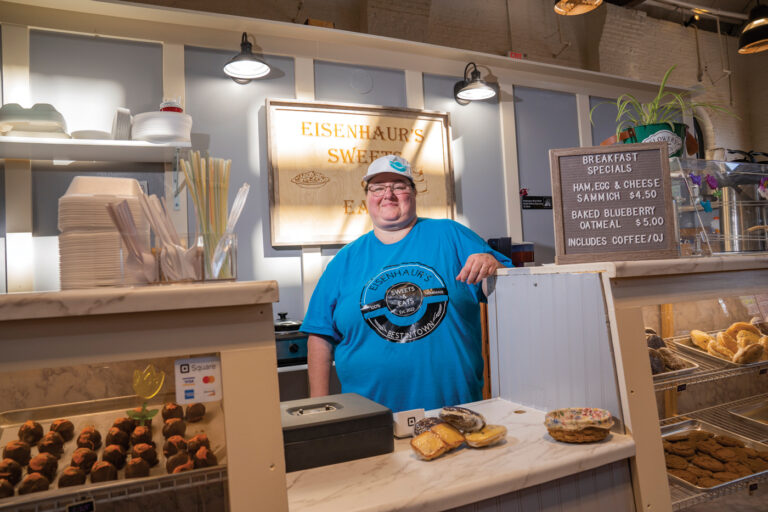 Mindy Eisenhaur will be taking over the market’s service kitchen. 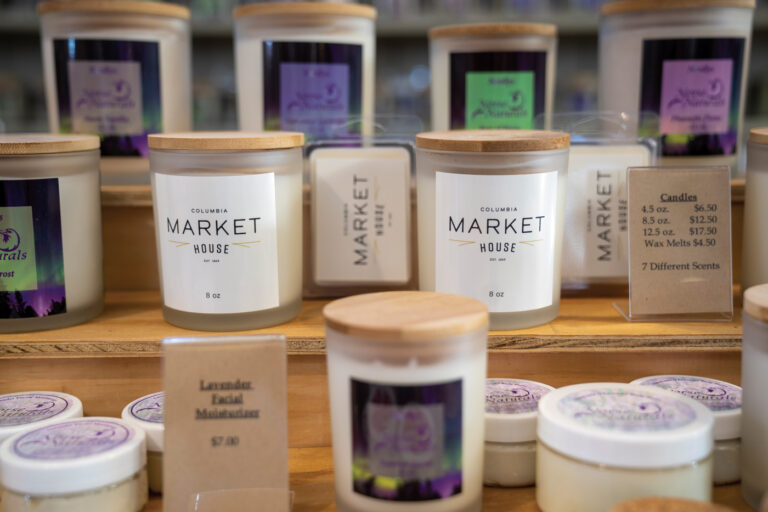 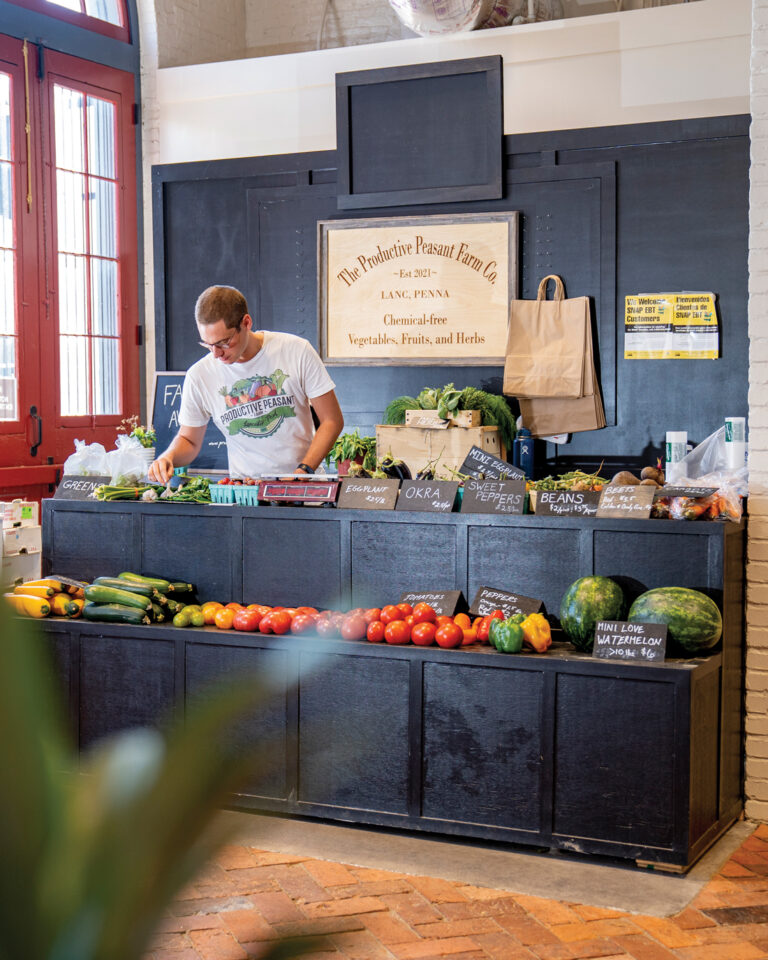 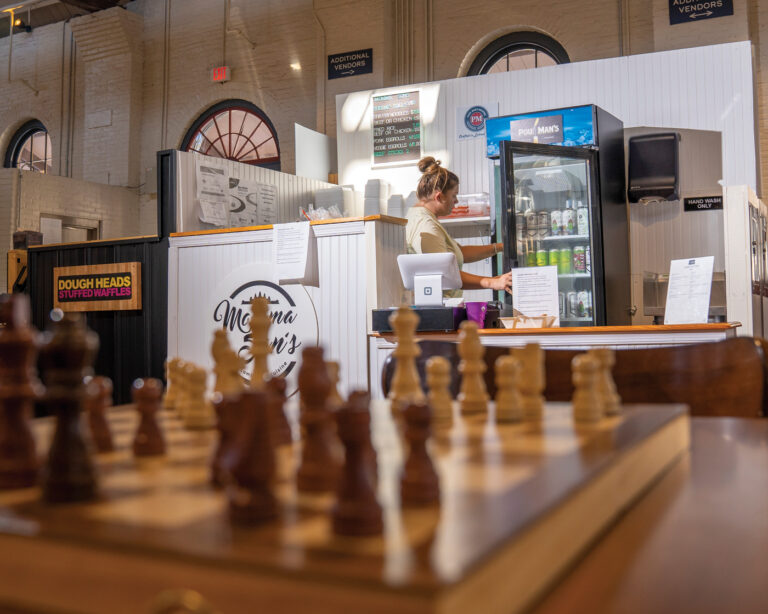 You can play chess while enjoying a brew from Pour Man’s, Cambodian fare from Momma Son’s and stuffed waffles from Dough Heads.

The latest buzz is that Eisenhaur’s Sweets & Eats will be taking over the restaurant kitchen that was formerly occupied by Gypsy Kitchen. Owner Mindy Eisenhaur (who once cooked in the kitchen of the local VFW) is excited about the opportunity and plans to expand her menu. The service kitchen can also be used for private parties, plus Chris would like to see the space become a community kitchen that can be used by food trucks or other small vendors/organizations, with Eisenhaur’s Sweets & Eats serving as the anchor.

Columbia Market House will be the scene of a haunted dinner and tour of the dungeon on Saturday, October 22. Cost is $25 per person (event is limited to 50 people). Reservations can be made by calling 717-572-7149. Additionally, on October 28 and 29, area nonprofits will have booths set up at the market house for a fundraising opportunity.

Columbia Market House is located at 15 S. Third St. At present, it is open to the public on Saturdays from 7 a.m.-3 p.m. For more information, visit columbiapamarkethouse.org or Facebook.

The market house dates to 1869. In the late 19th century, jail cells were installed in the basement of the building. Market manager, Chris Vera, provides dungeon tours on Saturdays from 9 a.m.-2 p.m.