What a grand time: the 80s decade. Big hair, huge shoulder pads and legwarmers ruled. Flashdance and Fame … Michael Jackson and Madonna … Dynasty and Dallas. What were we thinking?

Now that the 80s brat-packers and mall chicks have grown up to become parents and responsible citizens, what better time to revisit their misspent youth and fashion faux pas! Time for a happenin’ 80s throwback party!

YWCA Lancaster took the great 80s to the max with a party that benefited the 127-year-old organization’s Childcare Services. For decades, working women have relied on the organization to provide flexible, nurturing care for their children – a service that impacted over 600 children, from infants through 12 years, in 2015.

Guests were encouraged to don their fave 80s attire or adopt an iconic celebrity look. Dancing (to those fabulous 80s hits) and indulging in retro mall food (Cinnabons, pizza bites and an Orange Julius-inspired cocktail) were also on the agenda. Adding to the buzz was the surprise of the party’s location, a closely held secret that was revealed only a week before the event.

A spacious warehouse in Greenfield Corporate Center became a one-night shrine to the 80s, with dueling DJs spinning the most memorable hits of the decades. Luxe Salon & Spa offered complimentary hair makeovers, teasing bangs to 80s heights, crimping and creating side ponytails for all who dared.

Who knew we would remember the dance moves to Michael Jackson’s Thriller video (with a little help from two moonwalking Michael Jackson impersonators)? Professional singers and dancers from American Music Theatre – assembled by local actress Sarah Timm – also conjured up Madonna’s Material Girl and scenes from Dirty Dancing, while the two Michaels staged a dance-off of Billie Jean and Beat It. In between, the dance floor was filled with Valley Girls, Blues Brothers and others wearing their sunglasses at night (Ray Bans, of course). 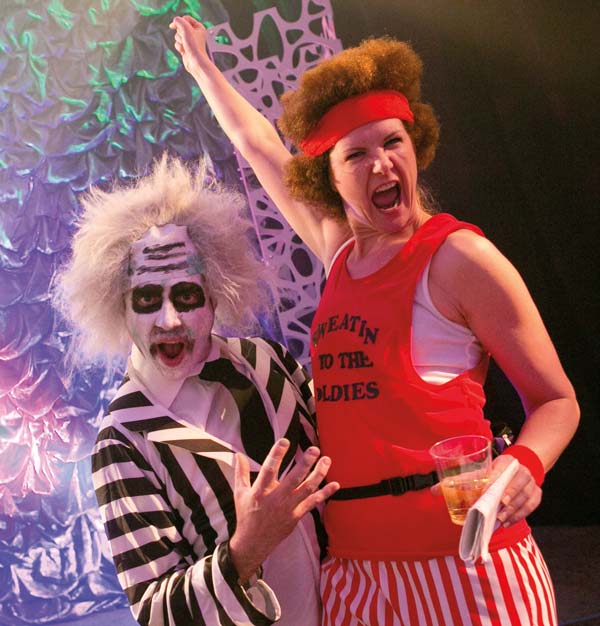