“The single most important addition to the [Lancaster County] farming system was tobacco.”

Many people enjoy a casual puff on a cigar now and then. To this, I say, no foul. It is common knowledge how “big tobacco” was shredded during the 20th century. Most would say, rightly so, but then again, tobacco played an important part in the agricultural development of our area, and the popularity of recreational cigar smoking is only growing.

After the Civil War and until the 1920s, tobacco was an “important income source on a per-acre basis” for the Lancaster Plain, as delineated by the Pennsylvania Agriculture History Project. From 1920 to 1960, the area saw a decline in tobacco farming and an increase in dairy and poultry farming. Fields rich with flowering tobacco in my youth are now sown with corn and soybeans.

Still, tobacco has an important impact on our economy and our lifestyle today. The Lancaster Leaf Tobacco Company on Pitney Road is North America’s largest processor of dark, air-cured tobacco. Specialized cigar shops and lounges have recently popped up around the area, offering discerning customers specific experiences and elevated products. The act of looking down upon cigar smokers – for the most part – has lessened as the practice has become an upscale pastime everyone can enjoy (within legal limits). So, grab a stogie … 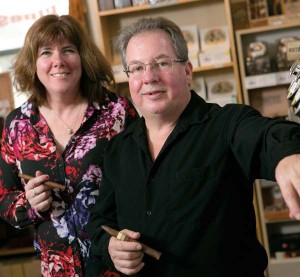 John Hay Cigars dates back to 1882, when it was a label under the WW Stewart & Sons brand. John Hay, who was Private Secretary to Abraham Lincoln and Secretary of State to Presidents William McKinley and Teddy Roosevelt, enjoyed cigars enough to allow the Pennsylvania company to use his name on a product line. Founded in Newmanstown, with major production moving to Reading in 1898, the tobacco specialists now call Kitchen Kettle Village their home.

Still family owned, John Hay Cigars is operated by David and Lauren Patrick. The husband-and-wife team started selling cigars at the Intercourse tourist attraction in 2004. Operating from a small table, they soon graduated to a building and, after 12 years of success, have plans for a smoking lounge (complete with poker tables) in 2016.

John Hay Cigars is known for its locally sourced products. “Our Statesman Series is locally made from a Pennsylvania Broadleaf tobacco mostly grown in Lancaster County. The tobacco is very thick and elastic, and they are a treat to enjoy,” says Lauren.

The shop offers traditional Statesmans as well as many different flavored cigars — including a Pennsylvania Dutch root beer! The most popular flavor is Amish Spice. They also carry imported cigars, including a proprietary line of Dominican, hand-rolled cigars using PA Broadleaf tobacco. 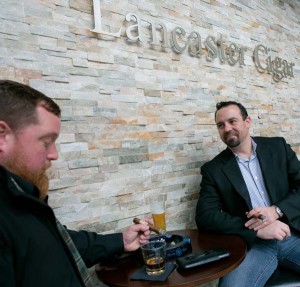 Friends James Diener (left) and Mike Cardina like the fact that Lancaster Cigar Bar provides a setting in which they can smoke cigars, enjoy a beer or cocktail and sample the tapas-inspired menu.

Aficionados Mike Cardina and James Diener recently met up at the newest hot spot for cigars, Lancaster Cigar Bar — also known simply as Lancaster Cigar — to have a few puffs and enjoy a drink. That’s the draw, a full bar, a selection of craft beers and a tapas menu. The combination — with cigar sales and enjoyment — is truly unique to the area. It’s what brought the friends to Lancaster Cigar. Mike, my longtime friend and a local Realtor, and James, who works HVAC with Vertex Mechanical, met years ago on the porch of Quip’s Pub. They immediately started talking cigars.

“I read about this place described as ‘designated for cigar smokers,’ and I wanted to check it out,” says Mike, referring to Lancaster Cigar. “It’s the first place in Lancaster dedicated to cigar smoking where I could also get a beer.”

Lancaster Cigar is owned by Daniel Falcon, a self-described “aficionado of premium cigars.” He saw the demand for a venue where cigar lovers could enjoy a premium cigar with a fine cocktail or craft beer. The food has a Latin flair, featuring small plates served with Cuban rice, black beans, plantains and avocados. 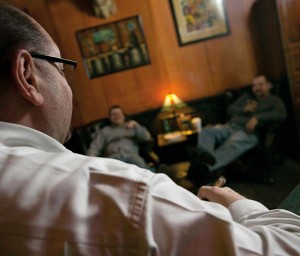 Shaun Sponagle (white shirt), who co-owns D&S Cigar Lounge with Dave Brownsberger, enjoys a cigar and camaraderie with some guests.

Just outside the city limits, in Chelsea Square, is where you will find one of the more popular destinations for cigars. Hinging on the love of celebration and the ideal of timeless camaraderie, D&S is the passion of Dave Brownsberger and Shaun Sponagle, who opened the storefront in August 2011. The two have been friends since junior high school and describe themselves as sharing a similar vision as “opposite ends of a coin.”

D&S is a bit of a hidden jewel, tucked into a seemingly monotonous strip mall. The warm space contains four wall-mounted humidors and a walk-in humidor in the back. The overstuffed, leather chairs beckon to a cigar smoker, enticing him or her to power off the cell and enjoy some quiet time. Or, you can go in the opposite direction and surf on the free Wi-Fi or catch up on the latest news or sports on the two plasma flat screens.

If you’re looking to amass a collection of cigars, but don’t want to be bothered with a humidor in your house, D&S also rents small personal humidors to conveniently store your favorite smokes. 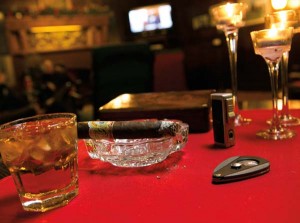 Members of the Elks Lodge #134 are afforded the privilege of being able to smoke cigars in the lounge.

For those looking for a cigar-friendly place to sit back and relax, you might consider joining the Benevolent and Protective Order of Elks, commonly referred to as the Elks. The Lancaster Lodge of the fraternal organization goes beyond offering a smoking lounge. “A lot of the people I got to join the Elks did so because they can come here to enjoy a cigar,” says member Michael Shoemaker.

I had reached out to Michael after I had heard the Elks holds cigar-pairing dinners. The Lodge does indeed host such events; however, due to state law, a guest must be signed in by a member and cannot purchase their own alcohol (members are free to purchase drinks for anyone in attendance). Michael estimates the cost of a dinner ticket will be approximately $60 when the Lodge restarts the adult-only events later in 2016. “Typically, we’ll have a cigar provider offer several cigars for the dinner, usually for before, during and after,” he notes. 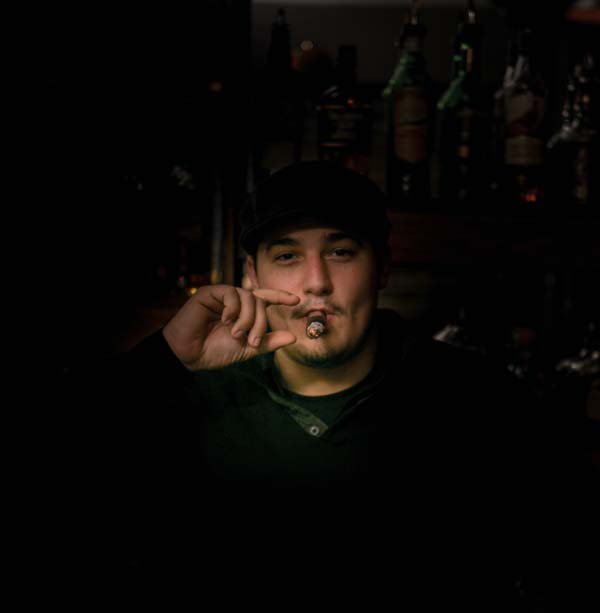