Six years ago, Becky and Terry McKim became empty nesters. “A year into it, we began contemplating our next move,” says Terry.

Baby Boomers. They continue to impact the way of the world. Now ranging in age from their early 50s to early 70s, the “baby” part of this generation’s title was dropped years ago. They simply became known as “boomers.” But, it seems other buzzwords – Perennials and the Ageless Generation – are replacing boomer in describing the generation that came of age in the 60s. This is a generation that loves to work and play. They’re doting grandparents. They’re involved in their communities. Education is on-going. They remain an economic force as they redefine retirement.

The new buzzwords define the McKims to a “T.”

Married for 37 years (they met on the playground as third graders), they are the parents of a son and daughter and the grandparents of two boys and four girls who range in age from 2 to 8. Together, they work for Gage Personnel, which has offices throughout the region; Terry is the director of operations, while Becky is the business development manager.

They raised their children in a farmhouse they completely remodeled. The one-acre property included gardens, a swimming pool and a rental house. “We were spending our weekends doing nothing but yard work,” Becky recalls of life after children. “We hadn’t used the pool in two years. When the kids lived here, it was perfect, and we all loved it, but now that it was just the two of us, it became a burden that kept us tied down.”

In Terry’s estimation, “Our lifestyle had outgrown the property.”

So, the two began searching for a new homestyle that would complement their new lifestyle, which included discovering new restaurants, taking in productions at EPAC and the Fulton, becoming First Friday regulars and treating themselves to weekend getaways. Retirement communities didn’t appeal to them. The only thing they planned to retire was the lawnmower.

They came up with a very short check-list for their next home. “It had to be unique, low-maintenance and offer a fun and lively environment,” Terry says. Attending Open Houses didn’t yield results. “We didn’t see anything that made us want to move,” Becky recalls.

The check-list took them to downtown Lancaster, where a warehouse was on the market. “We almost went in that direction, but in the end, we thought it would be more of a project than we’d like to tackle,” Terry explains.

Then, Becky thought of Stoudtburg Village in Adamstown. “We looked at it 20 years ago, when it was first being built,” Becky says of the German-inspired village that was launched by Ed and Carol Stoudt. Visually, the village borrowed from Bavarian-style architecture. Conceptually, the premise was for small business owners to open shops on the ground floor of the buildings they owned or rented and live on the upper floors. Becky, who was formerly a personal shopper at Doneckers, loved the concept as she had always entertained the idea of opening a fashion store of her own. But, the house with a big yard won out, and the family put down roots in Ephrata. 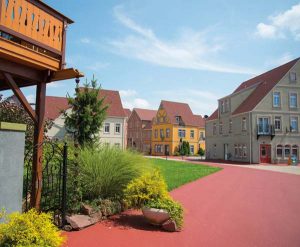 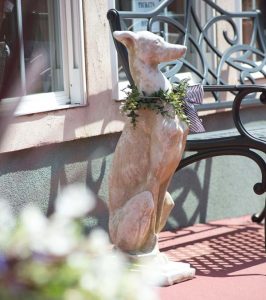 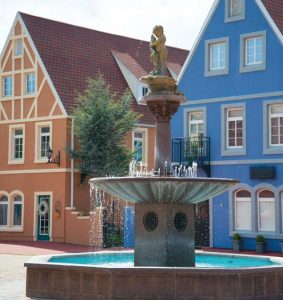 Stoudtburg Village is comprised of Bavarian-inspired buildings that provide shopkeepers with retail space on the ground floor and living space on the upper floors. The village is home to antiques shops, bed-and-breakfasts, a salon, a restaurant and other similar-type businesses.

The Mckims decided to check out Stoudtburg Village for a second time. They were happy to discover that Bob Achey was building new single homes on the undeveloped land adjacent to the village. The McKims chose a building lot that offers a view of the village, as well as a pond and woodland.

They then worked with Bob on tweaking the design of one of the models that was being built on the property. “We really wanted to put our spin on downsizing,” Terry says.
The McKims’ tweaks created an open first floor, eliminated a dining room, enlarged the windows on the first floor and allowed for flex spaces (the basement gym can easily become a shop or office, and the very large closet on the second floor could become a nursery, a small third bedroom or an in-home office). A patio creates an outdoor room that’s perfect for relaxing or entertaining. “And, there’s no grass to cut,” Terry points out.

The McKims were then assigned the task of choosing a color for the stucco that defines the look of the village. “We were given color charts, and the two of us studied them in separate rooms,” Becky explains. Incredibly, when the meeting reconvened, each had chosen the same color; Becky describes it as “Barney Purple.” “I don’t know where that came from,” she laughs. “My favorite color is red and Terry’s is green.”

Inside, the very contemporary charcoal-and-white color scheme is accented with pops of purple. “We figured if we’re going with purple, we need to fully embrace it,” Becky says. The color scheme balances perfectly with the black leather furnishings, stainless appliances and LVT floor.

From a décor perspective, minimalism rules. “We gave so much furniture away,” Becky says. “I figure the more storage you have, the more stuff you accumulate.” She has even downsized her wardrobe.

As you might imagine, living in a purple house has come to define the McKims. “If we meet someone new from the village, all we have to say is ‘we live in the purple house,’ and they know exactly where our house is,” says Terry. Visitors to the village can’t resist having their photos taken in front of the house. “It’s very popular with Baltimore Ravens fans,” Terry adds. Wedding parties from Stoudt’s gravitate to the fountain in the village’s plaza and to the McKims’ house for photo ops. “It’s fun; we get to meet a lot of nice people,” Becky says.

The Mckims love living in the village. They appreciate its diversity, explaining that residents range in age from their 20s to 70s. “More families are moving here,” Becky notes. Being so close to the turnpike allows residents easy access to jobs in Harrisburg and Philadelphia. They like that they can pop into the Village Haus or walk to Stoudt’s restaurant and brewery for drinks or dinner. Walking has become a favorite pastime. “We walk through the village, over to Stoudt’s and around Adamstown,” Becky reports.
They are hopeful that the retail atmosphere in the village will come back to life; the economic recession impacted businesses in the village, and recovery has been slow.
A new builder has set up shop in the village. Late last year, Keystone Custom Homes purchased the remaining lots. Its entry in the 2017 Parade of Homes claimed first place in six categories, resulting in Best of Show honors in its price division.

The village’s plaza has become a social center thanks to impromptu get-togethers or Party on the Plaza musical and food events that are sponsored by the Village Haus (typically on Friday evenings), which attracts visitors as well as residents.

The McKims are excited that the village’s Task Force is planning events such as the Christmas in the Village celebration (December 2; check the village’s Facebook page for details) that will include a wine walk, open houses, carriage rides and musical entertainment provided by a choir from Albright College. “It’s so pretty here at Christmas,” Becky says. “It looks like something out of a Charles Dickens’ novel.” 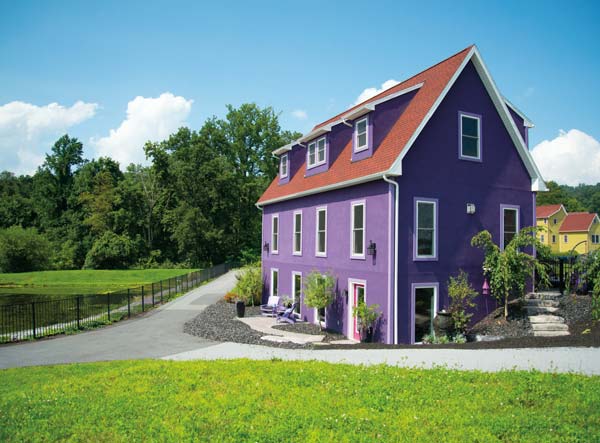