Inspired by European bistros, C’est La Vie makes its home in the heart of Downtown Lancaster – across the alley ...Read More

Bistro-style Dining in Downtown Lancaster
Valentine’s has always been a popular day to become engaged and even married. In fact, Thanksgiving through Valentine’s is referred ...Read More

Love!
Valentine’s Day is all about chocolate. But what happens if your significant other dislikes the “most popular sweet treat” in ...Read More

Open since March 2019, Decades combines amusement, food and drink and a bit of nostalgia. This boutique six-lane bowling alley and arcade boasts a full-service restaurant and bar and makes its home in the former Stahr National Guard Armory building. 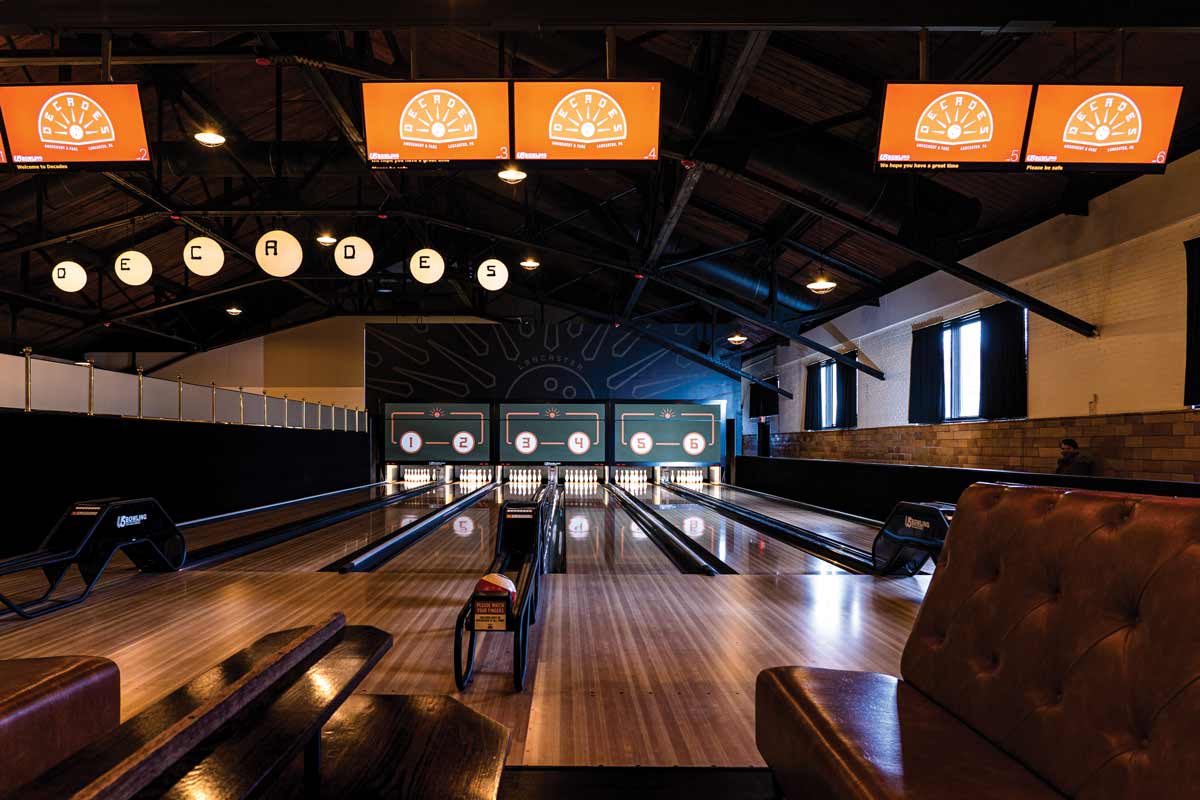 The former Stahr National Guard Armory, which dates to the 1920s, is now home to Decades, an amusement center and bar/restaurant.

“We knew we wanted to be in downtown Lancaster. There’s a lot of art, theater and restaurants but not a lot of amusement-type places. There aren’t a lot of buildings downtown that can accommodate a bowling alley, so we were glad we found the armory. We walked in here and knew that we found the place,” says Chris Trendler, a partner and Decades’ general manager. Other partners include Jonathan Yeager and Adam Ozimek. If their names sound familiar, they are the team behind Joycat Events, which is best known for Lancaster Craft Beerfest, which is tentatively slated to return on August 28 after a year’s hiatus due to the pandemic.

The building was constructed in two phases in the 1920s and ‘30s and is on the National Registry of Historic Places. The National Guard left the space in 2010; it served as the performance venue for Theater of the Seventh Sister for several years. Today, the space is filled with the sounds of bowling balls colliding with pins, laughter as guests challenge one another at arcade games and the conversational buzz of guests sharing food and beverages. “In our unique space, you have an interesting experience even before you order food,” Chris says. 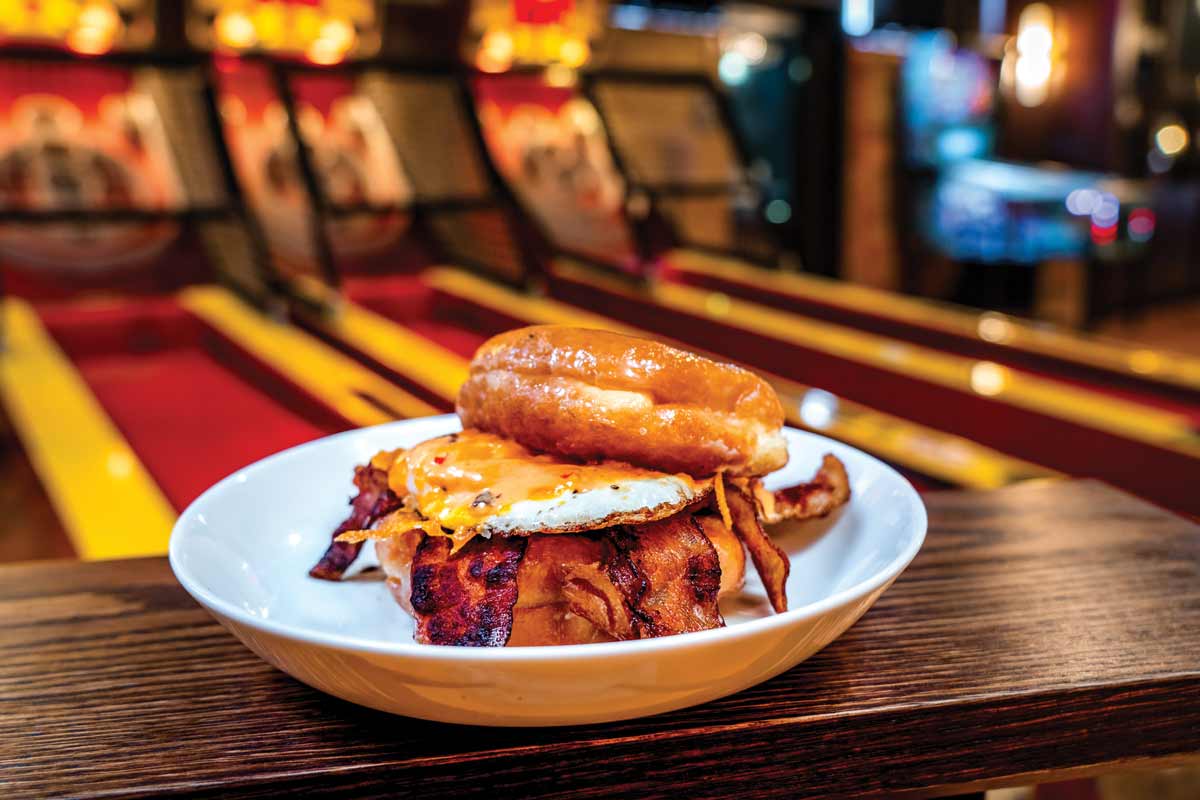 The venue’s name, Decades, is intended to instill a sense of nostalgia. The ambience is high-end and on-trend. Crystal chandeliers hang over the seating area in the bowling lanes but there’s a bit of an industrial feel with the exposed black metal beams and lofty wood ceiling. Natural light filters in from windows on the wall containing the large bar. It’s not a sports bar, but there are two TVs near the bar. “We want to encourage people to interact with one another but we also know that some people like to keep up-to-date on their team’s score,” Jonathan says.

The mix of experiences – bowling, arcade, food and drink – was part of the partners’ vision from the onset. “It’s a very social experience,” Jonathan notes. “Decades is a great place for couples as well as groups of friends. People have come to think of us as a fun date place – the games are a great way to break the ice.”

The regulation-size bowling lanes use string-set pins – Jonathan says they’re easier to maintain and are what most entertainment venues have in place. Scores are tallied on digital screens above the lanes. The COVID-19 policy is generally to use every other lane. 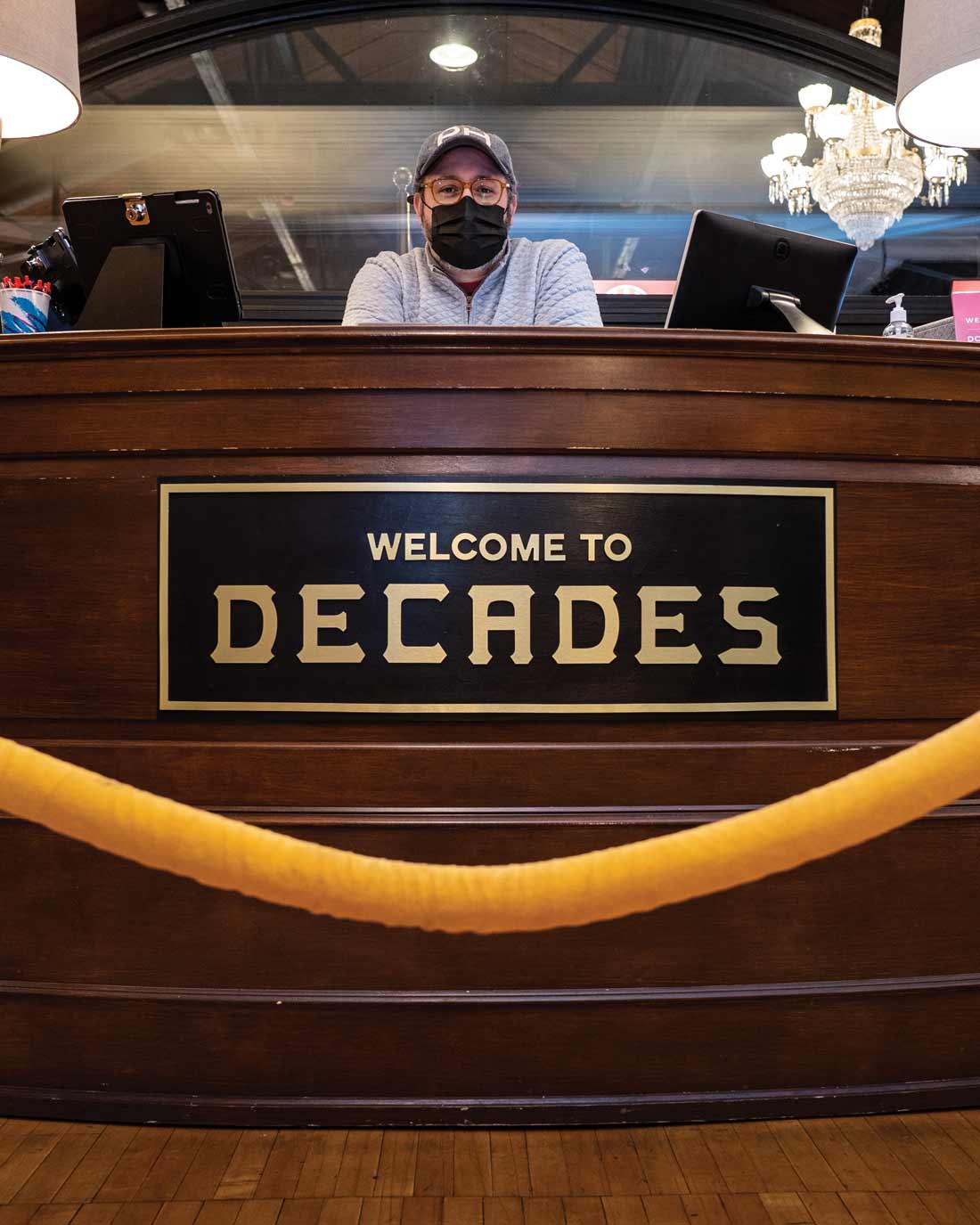 Jonathan Yeager is one of the owners of Decades, along with Chris Trendler and Adam Ozimek.

As for the arcade, it features a variety of 30 retro arcade games, which operate on a token system. (A token machine is available, so there’s no need to bring quarters.) Video games include Donkey Kong, Centipede, Pac-Man and Super Mario Bros. “Adam and I grew up playing video games,” Chris explains. “When we decided to do Decades, we had a wish list of the games we wanted to find.”

There are also some basketball hoops and Skee-Ball, which Chris says is popular and a favorite of nearly everyone no matter their age group. He also reports that the #12-ranked Skee-Ball player in the U.S. can sometimes be found at Decades rolling a few games. 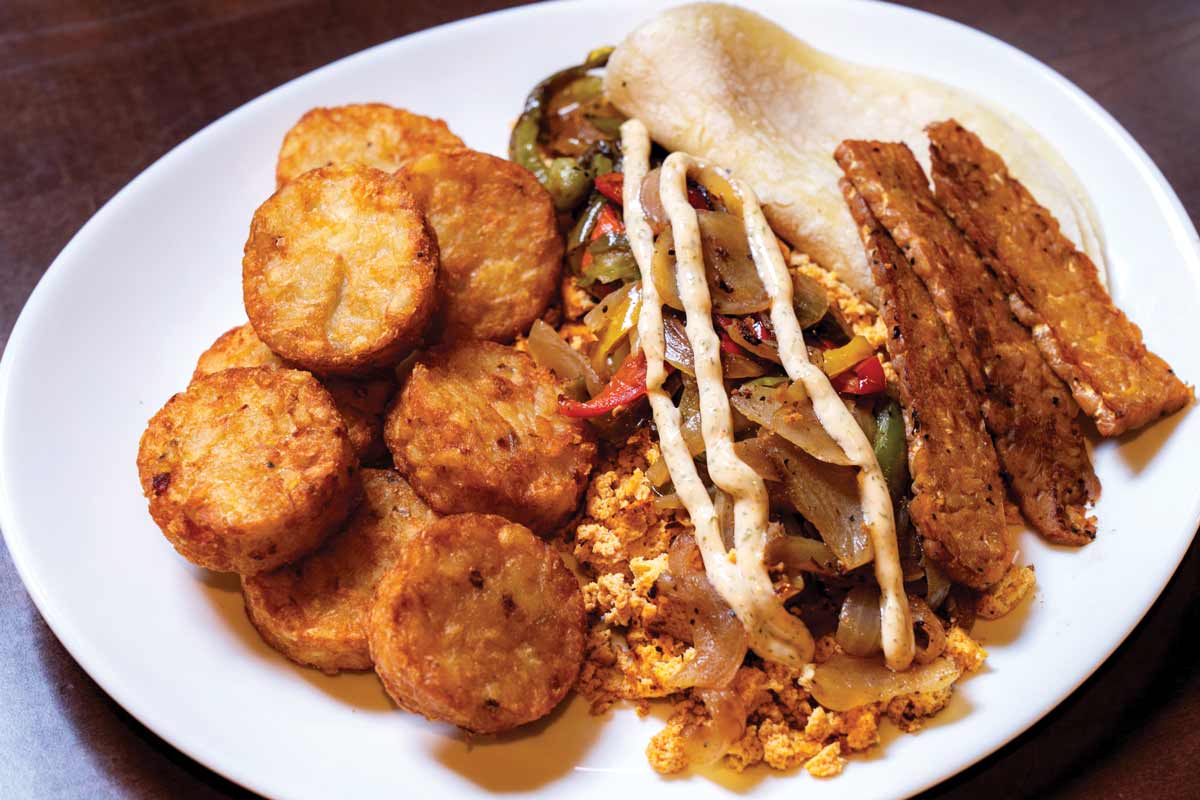 The menu has shifted a bit during the pandemic and now focuses on fare that does well for both take-out (including breakfast) and dine-in (when permitted). Wings (including vegan wings) and Decades’ signature smash burgers (beef burgers that are prepared in a different way than traditional burgers) are popular items. The menu also includes harvest salad, brisket chili, skillet cornbread, vegan Nashville hot chicken sandwich, chicken and waffles (also available as a vegetarian entrée), pimento mac & cheese and hand-cut fries.

As for dessert, blondies or beignets (with a chocolate coffee reduction) are on the menu. Bar selections include sommelier-selected wines (Chris’ area of expertise), 24 microbrews on tap and some fun cocktails.

There’s also a kid’s menu. While children are welcome, those under 8 must have adult supervision at all times.

Jonathan also points out that Decades is a great space for business and team-building events, as well as other social events. 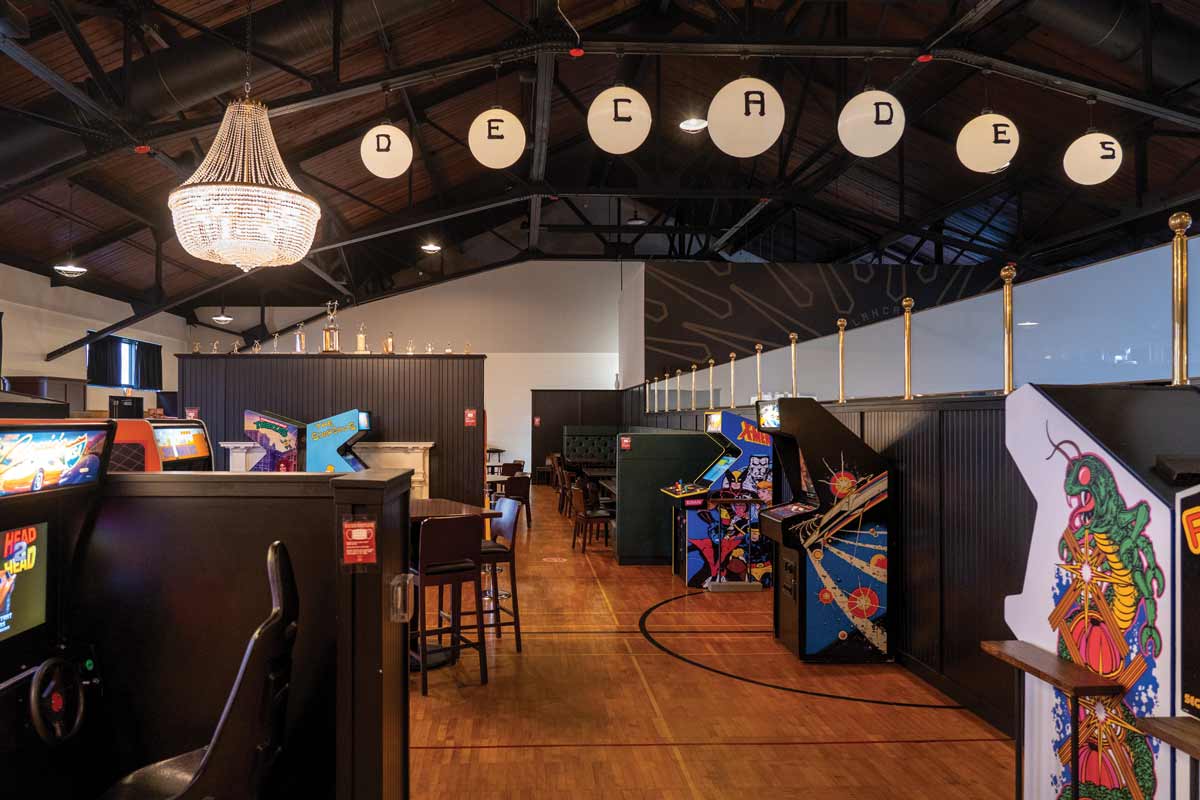 Decades is located at 438 North Queen St., Lancaster. Hours have shifted during the pandemic – check the website or Facebook for the most up-to-date hours. Take-out food is available and can be ordered via the website. Pickup can be made at the restaurant or through delivery services such as Uber Eats, DoorDash or Grubhub.  Reservations for dine-in can be made on their website. Call 717-282-1421 or visit decadeslancaster.com or Facebook.

The former Stahr National Guard Armory, which dates to the 1920s, is now home to Decades, an amusement center and bar/restaurant.