The Designer: Tim Arpin launched his business, The Gilded Lily, 27 years ago. The company offers services ranging from floral design to gardenscaping. However, The Gilded Lily may be best known for its container gardens and seasonal décor. “Most of my clients have me do designs for all four seasons,” Tim notes. And, most give him free reign. “They like the element of surprise,” he says. Tim’s services don’t stop at the design phase: He maintains the displays throughout the season and removes (and recycles) them when a new season arrives.

The Client: Holly Shaffer, who formerly worked in downtown Lancaster, always admired Tim’s displays at Christiane David’s gallery along N. Prince Street. One day Tim happened to be working on a display outside the gallery, and Holly asked for a card. She is now among one of Tim’s regular clients. Last fall, he decorated the entrance to her home with a fall harvest design that included whimsical hints of Halloween. The doorway’s color scheme added to the fall look, as did Holly’s dog, Chloe, a rescue who has found her furever fashion sense courtesy of Pittsburgh-based ChicDoggieBoutique.com.

The Look for Fall 2015: According to Tim, fall lends itself to everything from “bountiful harvest to all kinds of Halloween.” You can even combine the two by interjecting spiders, owls, witches, etc., into your harvest display and pulling them out once Halloween is over.  Tim, who begins his fall installations in mid-September, reports that the lengths Lancaster residents go to decorate for the season have not gone unnoticed in the industry. “I have a supplier in the Midwest who always asks, ‘What do you do with all this?’”

Pumpkins Aplenty: The standard carving pumpkin is no longer the decorative element for fall. According to Tim, seed companies are continually reintroducing heirlooms and developing and hybridizing new varieties of pumpkins, squash and gourds. As a result, new colors, shapes, textures and sizes are enticing buyers. Tim purchases his pumpkins, squash and gourds from the Abner Miller Farm (Farmdale area), which utilizes organic methods to grow their crops.

Plants Galore: Until recently, chrysanthemums and asters were perceived as the definitive plants for the fall garden. Today, the choices seem endless. Even mums and asters are keeping pace from a color perspective. Plants to look for include ornamental cabbage/kale, Jerusalem cherry, ornamental “chili” and “black pearl” peppers, kalanchoe, pansies, Swiss chard, yucca, ajuga, heuchera, millet, sorghum and dianthus. “I grew a deep-purple color of dianthus especially for fall,” Tim remarks. Plants, such as ivy, vinca and ferns, can also transition into fall.

Color Trend: Go beyond black and orange and use one or the other with purple, golden yellow or burgundy for a more sophisticated fall look. And, the surprise color for fall is …
pink (think earthy as opposed to the pale and tropical hues we associate with spring and summer). Color can also be added through lighting. “By early October, it’s dark by 7 p.m., so we’re craving some light,” says Tim, who names orange, purple and gold as his favorite lighting colors for fall.

Texture: Elements such as corn stalks, hay bales and wreaths not only add texture, but they can also add varying heights to a display. Tim points out that pinecones and nuts are becoming popular decorative elements for fall and easily transition into holiday.

Beyond Residential: Seasonal decorations aren’t the sole domain of homeowners. Businesses are also using seasonal décor to prompt passersby to stop and take in the scenery. The Christiane David Fine Art Gallery in downtown Lancaster is one such example. “I purchased a painting, and it started a conversation,” Tim recalls. That was five or six years ago, and since then, Tim has been adding his artistic touch to the outdoor areas of the gallery. “We’re both known for our love for and use of color, so it’s been an interesting collaboration,” he says. “Again, she doesn’t tell me what to do, so I just design something and she then coordinates the art that appears in the windows,” Tim explains. The displays have attracted fans for both artists. “I receive constant feedback,” says Tim, whose work can also be seen – both indoors and outdoors – at the Hamilton Club.

For more information about The Gilded Lily, visit arpinsgildedlily.com or call 575-8567. 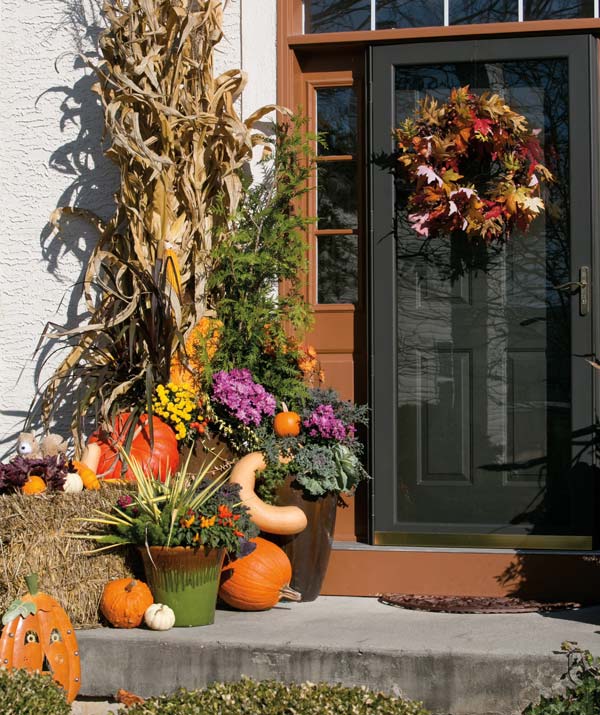 Holly’s front entry features a pumpkin and black color scheme, which provides the perfect backdrop for her harvest/Halloween décor. Tim likes such an approach to decorating. Halloween elements can easily be added and removed, enabling such displays to be on view from mid-September to Thanksgiving.