Cuba has intrigued me for years. The largest island in the Caribbean, I first glimpsed it on our honeymoon cruise. Before that, I learned about Cuba in history class in connection with the Cold War and the failed Bay of Pigs invasion. I knew little else other than the fact that, until recently, the United States had an embargo with Cuba on trade and travel.

The loosening of travel restrictions that was announced last year excited both my husband, Tom, and me. We were anxious to explore Cuba for several reasons. First, travel is in Tom’s blood. His great-grandfather, O.H. Shenk, founded the now-defunct Ridgeway Tours in 1920. Tom grew up in the industry and began working in travel right out of high school. A photo of Tom’s great-grandfather and grandfather appears in Joan Hess Siegrist’s book, Mennonite Women of Lancaster County, and shows them having dinner with a tour group in Cuba in 1923. A highlight of that trip was a tour of Milton Hershey’s estate and the company’s sugarcane and cocoa fields. Also making it personal is the fact that my late father was a car buff, and Tom and I both like antique cars. We knew that a lot of  ‘50s-era cars are still on the road in Cuba.

My curiosity about Cuba’s cars was piqued by a Discovery Channel series called Cuban Chrome, which delves into how they are kept on the road. It’s rather incredible, considering that, for the most part, Cubans do not have access to American car parts.

To our amazement, an opportunity to visit Cuba came up rather suddenly late last summer. We set sail for our week-long Cuban adventure in mid-September onboard Fathom Travel Ltd.’s  Adonia out of Miami. A division of Carnival Corporation, Fathom focuses on social-impact travel and sails to the Dominican Republic and Cuba on alternate weeks. The Adonia has a maximum of 700 passengers; the week we sailed there were 600 passengers.

It’s not your typical cruise. There are no glitzy shows or performances in the evening. Instead, entertainment consists of group games by the pool, movies, karaoke or music by the ship’s band. One night, a Cuban band performed.

There’s still the attentive staff and wonderful dining one expects of a cruise. But, there’s a twist that’s in line with the mission of social-impact travel. The cruise staff was known as impact guides, and during his daily ship-wide greeting to guests, the captain addressed those on board as “travelers.” During our first day onboard, Becca, our head impact guide, explained that there’s a decided difference between tourists and travelers –  tourists stay within their comfort zones, while travelers immerse themselves in the local culture. She challenged us all to be travelers and get outside our comfort zones on this journey. And, we did. 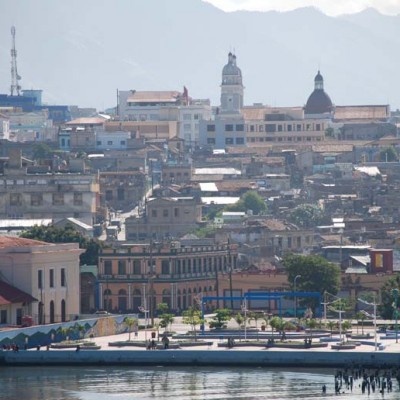 This view of Santiago de Cuba was taken as our ship was coming into the harbor. A park-like plaza can be seen in the foreground. The twin spires of the Cathedral of Our Lady of the Assumption, which is located in the town center, can be seen toward the top center of the photo. 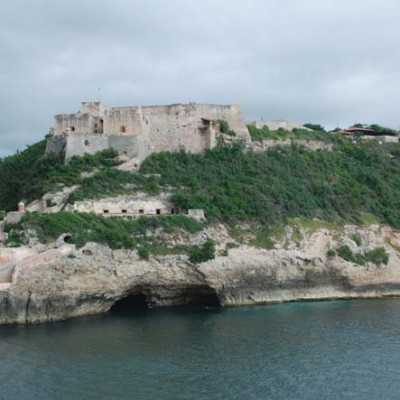 The El Morro castle, or fort, at the mouth of the bay that leads to Santiago de Cuba’s harbor. 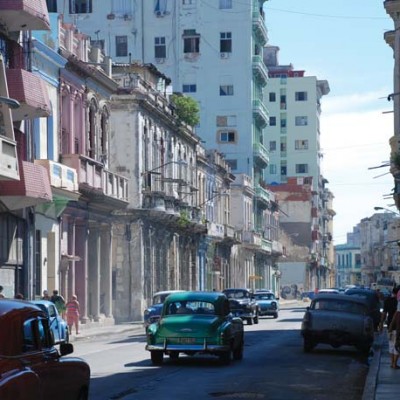 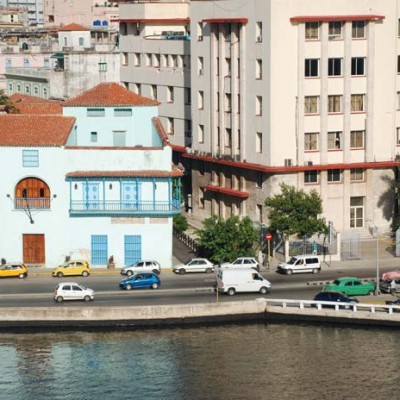 A veiw of Avenida Carlos M Cespedes by the harbor in Old Havana. The photo was taken from our balcony on the Adonia. 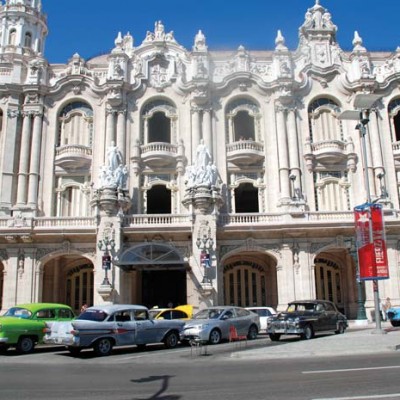 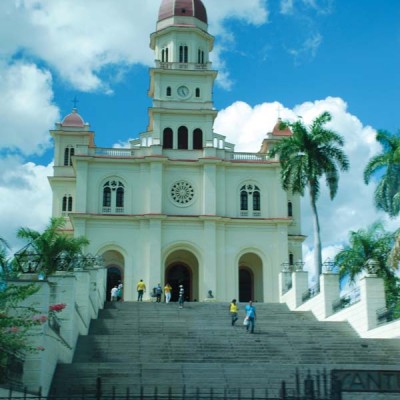 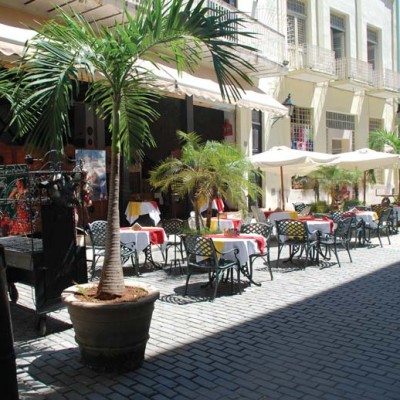 A sidewalk cafe at El Meson de la Flota near Plaza Vieja in Old Havana. The old cannons to the left in the photo are used to block vehicular access during certain hours and are commonly seen throughout Old Havana. 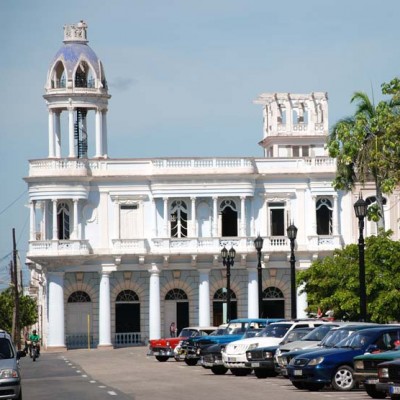 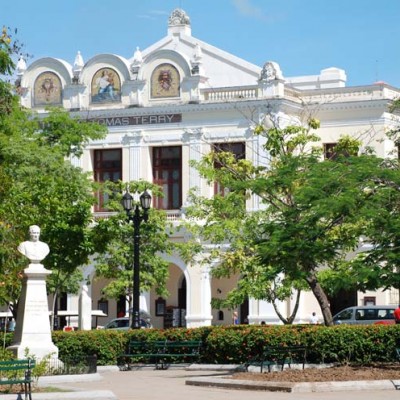 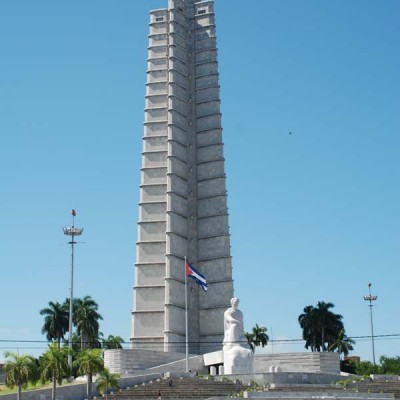 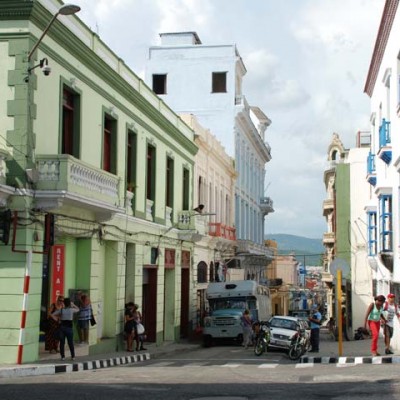 A view of Havana’s streetscape.

Our first port was Havana, Cuba’s capital city, where we were fortunate to have two days for exploring. The entrance to the harbor is guarded by stone forts originally constructed in the 16th century. One of the forts, El Morro, is perched on a rocky promontory along with a lighthouse. A large marble sculpture known as The Christ of Havana is located in a park near the fort. The main street along the piers was filled with the wonderful ‘50s-era cars that we were looking forward to seeing.

After going through immigration and currency exchange, we exited the building and found ourselves in Old Havana, one of several Unesco World Heritage sites we would visit. That day, however, we opted to take a tour that focused on Ernest Hemingway, who wrote The Old Man and the Sea while living in Cojimar, Cuba. Such tours are included with Fathom’s itinerary, plus there are optional tours to purchase.

We explored the Plaza de Catedral with its imposing cathedral before venturing to Cojimar for a tasty lunch in a waterside restaurant that Hemingway frequented. We strolled to the dock area where he kept his boat and then headed to Finca Vigia. Unlike his home in Key West, you can’t go inside, but doors and windows are open for viewing and photo taking. Except for key pieces of artwork, which were removed after his death by his widow, Mary, it looks like Hemingway could walk through the door. Furnishings, hunting trophies and books are all there (and exposed to the vagaries of heat and humidity). I climbed up the adjacent tower to see his writing studio with its amazing view of the surrounding area. It was quite an interesting tour.

The following day we enjoyed two of our hobbies: antique and classic cars and trains. We hired one of the classic cars, a 1956 Mercury, to show us such Havana sights as the capital building, the newly restored Gran Teatro de la Habana, and the Central Railroad Station, which was built in 1910 and is being restored. A park near the station is set up like a mini-museum with some old steam locomotives.

One of our other destinations was the Plaza de la Revolución, where Pope Francis celebrated mass in 2015, and which served more recently as a gathering place for Cubans paying tribute to Fidel Castro after his death in November. The architecture in Havana was incredible, and that includes the Hotel Nacional de Cuba. Built in 1930, it’s been declared a national monument. Before Castro’s Revolution, Havana welcomed celebrities such as Frank Sinatra and Ava Gardner, who were guests at the hotel.

We also did our own walking tour after lunch. Exploring the cobblestone streets, we found a post office to send some postcards home (they arrived in our mailbox in early November), wandered through narrow streets and talked to locals, including a few vendors.

Cuba has four deep-water ports, and we visited three of them (the fourth being Guantanamo). Established in 1819 on the Caribbean coast, Cienfuegos was our next port of call. It became a trading place for sugar cane, tobacco and coffee. Its central area, which has maintained quite a bit of its 19th century character, has been designated as a World Heritage site. We not only strolled the streets, but we were also treated to a performance by a local choral group in the Tomas Terry Theater, built in 1863, 11 years after Lancaster’s Fulton Opera House.

On to our final port, Santiago de Cuba, where we took an optional tour to El Cobre, a small town in the foothills of a mountain range. The nearby El Cobre copper mine, like nearly most of Cuban enterprise, is owned by the government and was shuttered in the early 2000s. The town is best known for its church, El Santuario de Nuestra Señora de la Caridad del Cobre, and its “Virgin of Charity”. Pope John Paul II visited in 1998, as did Pope Francis in 2015.

The church and its setting are stunning, and the people are warm and welcoming. We were treated to a performance by a steel drum band (Ave Maria performed on steel drums is quite breathtaking!) and dancers in native costume.

Our tour also included a stop at the former Bacardi distillery in Santiago. Although the rum manufacturer fled Cuba after Castro’s regime took over, the distillery continues to produce rum, but under another name. Heading back to the ship, we took one final look around the town and harbor before bidding farewell to Cuba. Thankfully, we had a day at sea to put our experiences into perspective and share thoughts with fellow travelers.

In many ways, this trip to Cuba was like stepping back in time due to the ‘50s-era cars and donkey- and horse-drawn carts that share the streets with more modern non-U.S. made vehicles juxtaposed with drivers of those vehicles using cell phones.

Since we returned home, some significant developments have occurred: Fidel Castro died in November; however, his brother Raul continues as president. While Fathom has announced that it will be discontinuing its Cuba cruises in June, one of the line’s sister companies may be adding a stop to Cuba. Royal Caribbean recently announced that it will be offering cruises beginning in April. Norwegian Cruise Lines also plans to offer sailings, but no details have been released. 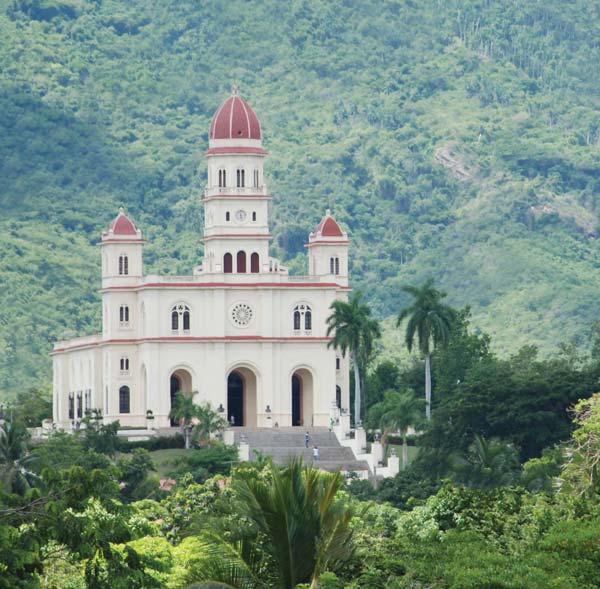 El Santuario de Nuestra Señora de la Caridad del Cobre was built in 1926. It was declared a minor basilica by the Catholic Church in 1977.