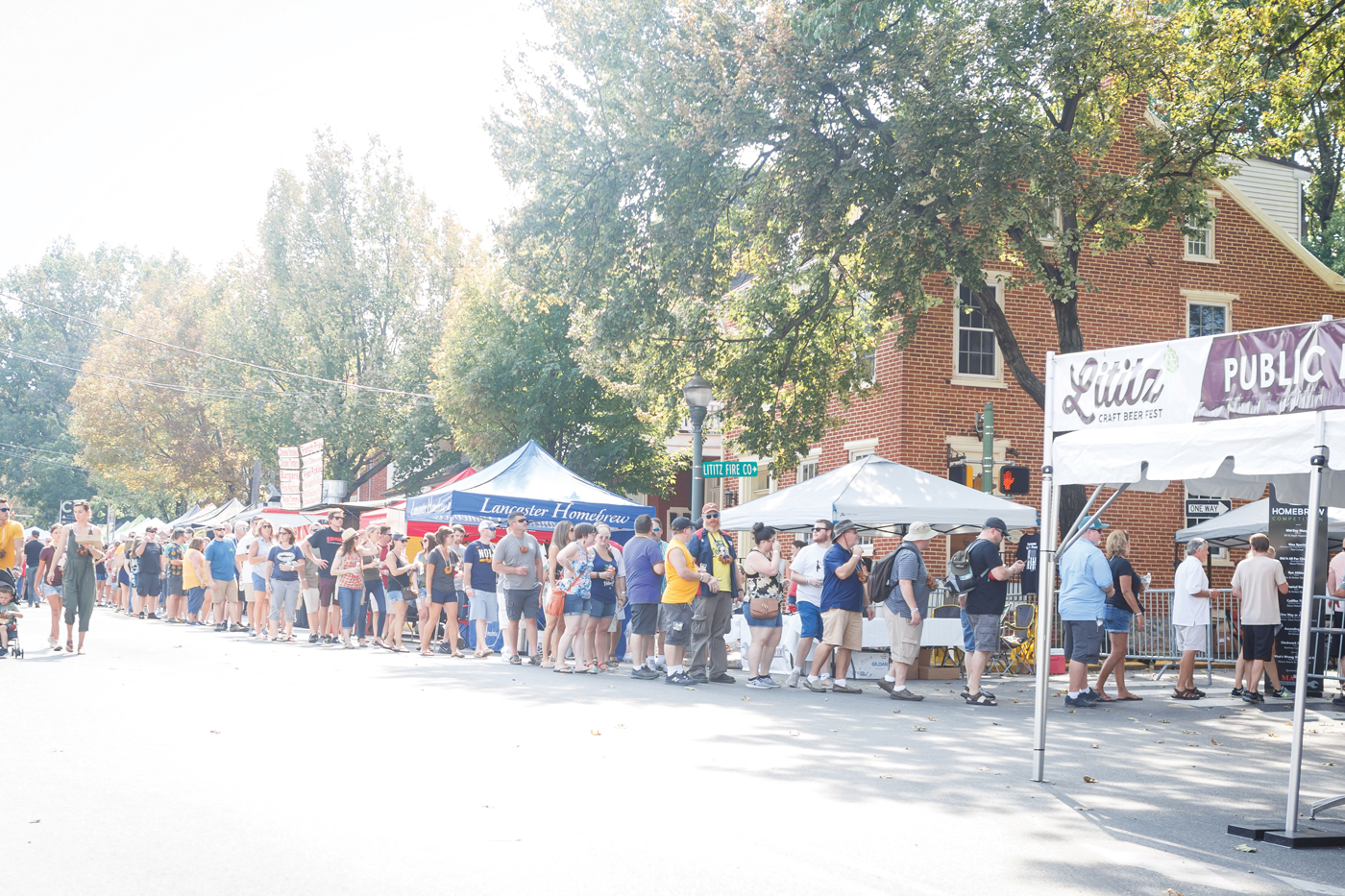 Get your tickets early! The Lititz Craft Beer Fest is always a sell-out!

When Jason Best visited a small beer fest in western Pennsylvania, his gears started turning. As a member of the Lititz AMBUCS – a chapter in a national organization with a mission to inspire and provide mobility and independence for everyone – he knew there was a need for a greater inflow of cash to fund philanthropic projects. A few weeks later he visited another festival and the beer fan knew he had to bring the idea to Lititz.

The idea worked. Thanks to a lot of hard work – and much trial and error – the Lititz Craft Beer Fest is now one of the most sought-after tickets in the beer-fest world.

A booming beer fest is an accomplishment in itself; the greater achievement is the more than $431,000 the Lititz AMBUCS has been able to raise and donate to local charities through ticket sales. 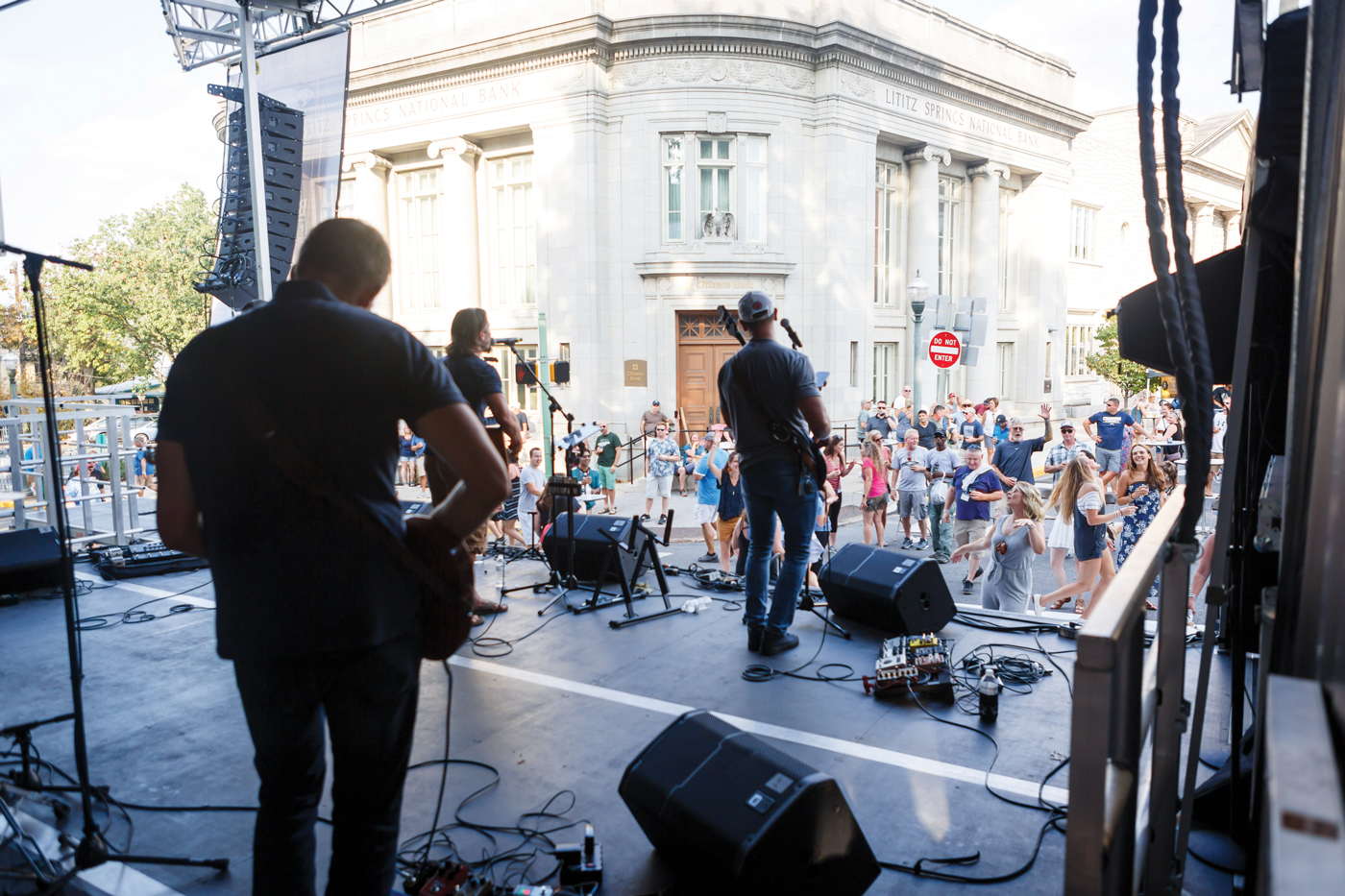 Jason joined the Lititz AMBUCS in 2005, when the community-minded business organization coordinated the Lititz Business Expo, which was the primary source of funds for all its benevolent works. Although the event raised between $12,000 and $15,000 annually, members recognized that the overall interest in business expos was on the decline. “It was big in the ’90s,” says Jason. “But we got to the place where our funds were on life support.”

Fast forward to 2013, when Jason and some other members were impressed by Rock Lititz’s Dawn of the Lititz Dead 5K Zombie Run to benefit Lititz Springs Park. More amazing was the fact that the event concluded with participants entering a miniature street fair that included beer, food and music. Beer. Food. Music. In the streets of Lititz. 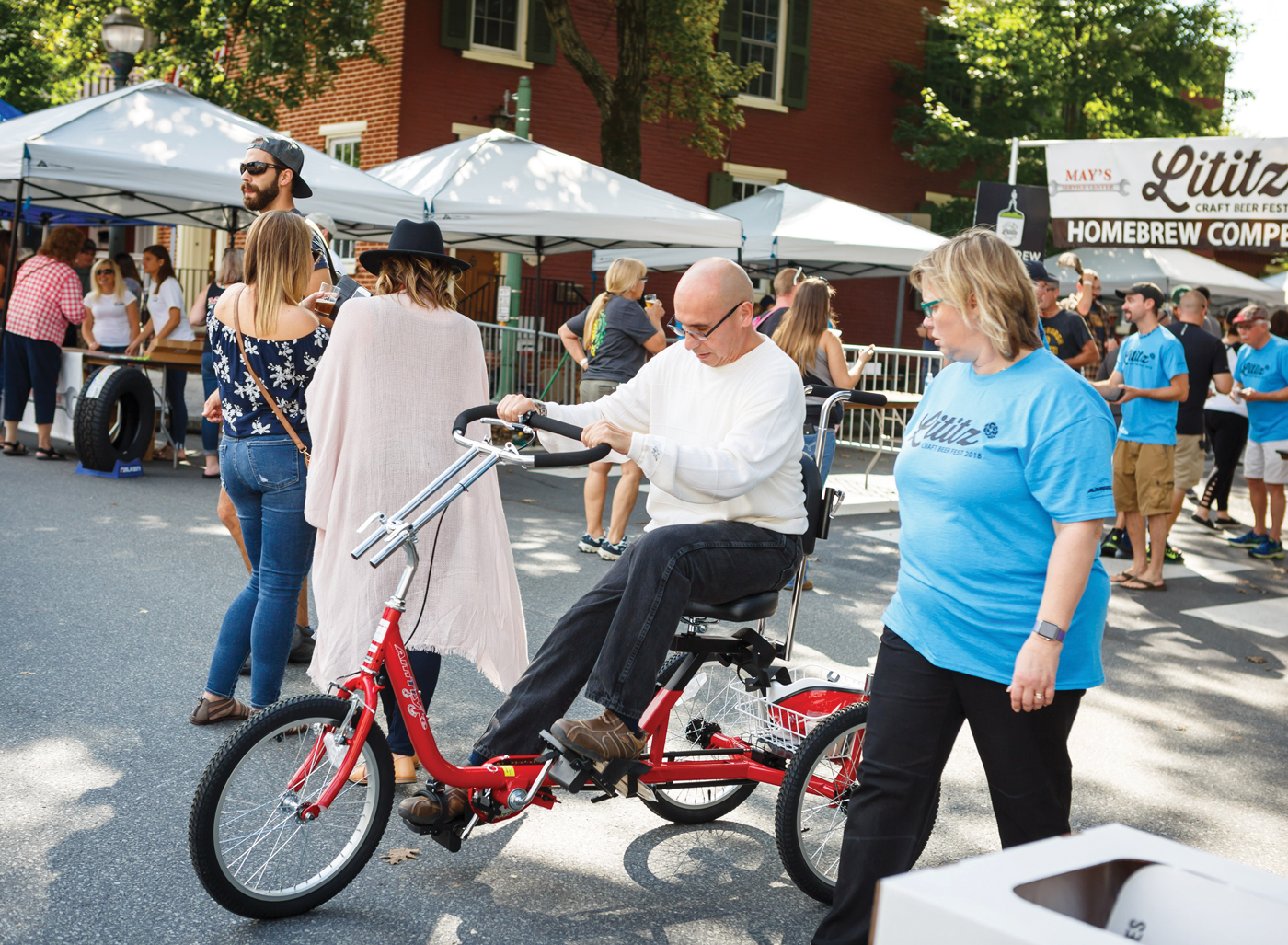 Army veteran, Manny Gonzalez, who was injured during deployment to the Middle East, is one of nearly 600 veterans across America who has received an Amtryke through AMBUCS.

“How did they get this approved?” Jason remembers questioning. The event prompted him to realize “this was our window of opportunity.”

At the next board meeting, Jason and friend and fellow AMBUCS member, Patrick Moulds, presented the idea of a local beer fest as a means to raise funds for the nonprofit. Everyone thought it was a great idea. “We didn’t know what we didn’t know,” admits Jason. “That first year was pretty rough.”

“Yeah, we got beat down pretty good,” adds Patrick, as the two talk about the origins of the Lititz Craft Beer Fest with current Lititz AMBUCS president, Kim Gingrich. “We went in thinking we had some idea of how a beer fest works,” recalls Patrick. “I remember we came out of our first meeting with a distributor and [realized] we didn’t know what we had gotten into.” 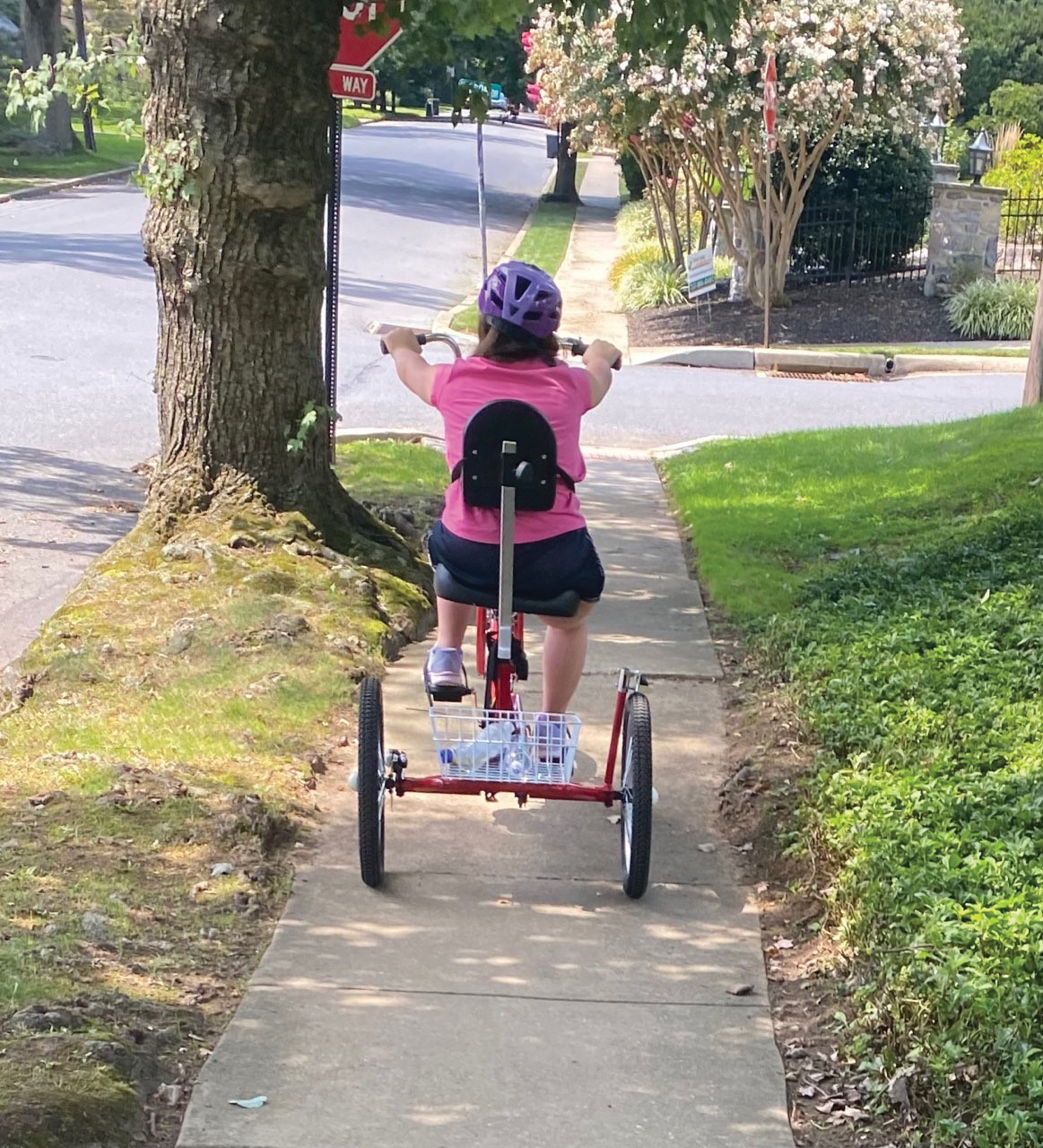 Thanks to proceeds from 2019’s event, the Lititz AMBUCS was able to aid 19 organizations and seven programs, award scholarships and provide Amtrykes to people of all ages in Lancaster and Lebanon counties.

The organizational team, which started as Jason and Patrick and now includes many others, had to learn state and local laws, create relationships with vendors and breweries and navigate many unknown intricacies. “We stepped into a world which we knew nothing about,” remembers Jason. Patrick recalls feeling overwhelmed.

Yet, the first Lititz Craft Beer Fest was a resounding success. Patrons loved it, and it brought in some much-needed funds – the one-day, 2014 event hauled in $57,000.

Lititz AMBUCS donates the money it raises to other local nonprofits. Jason explains that prior to the fest, “we were doling out $250 checks to these folks and I felt like there had to be more. It felt like we weren’t even putting a dent in the need that was out there.” 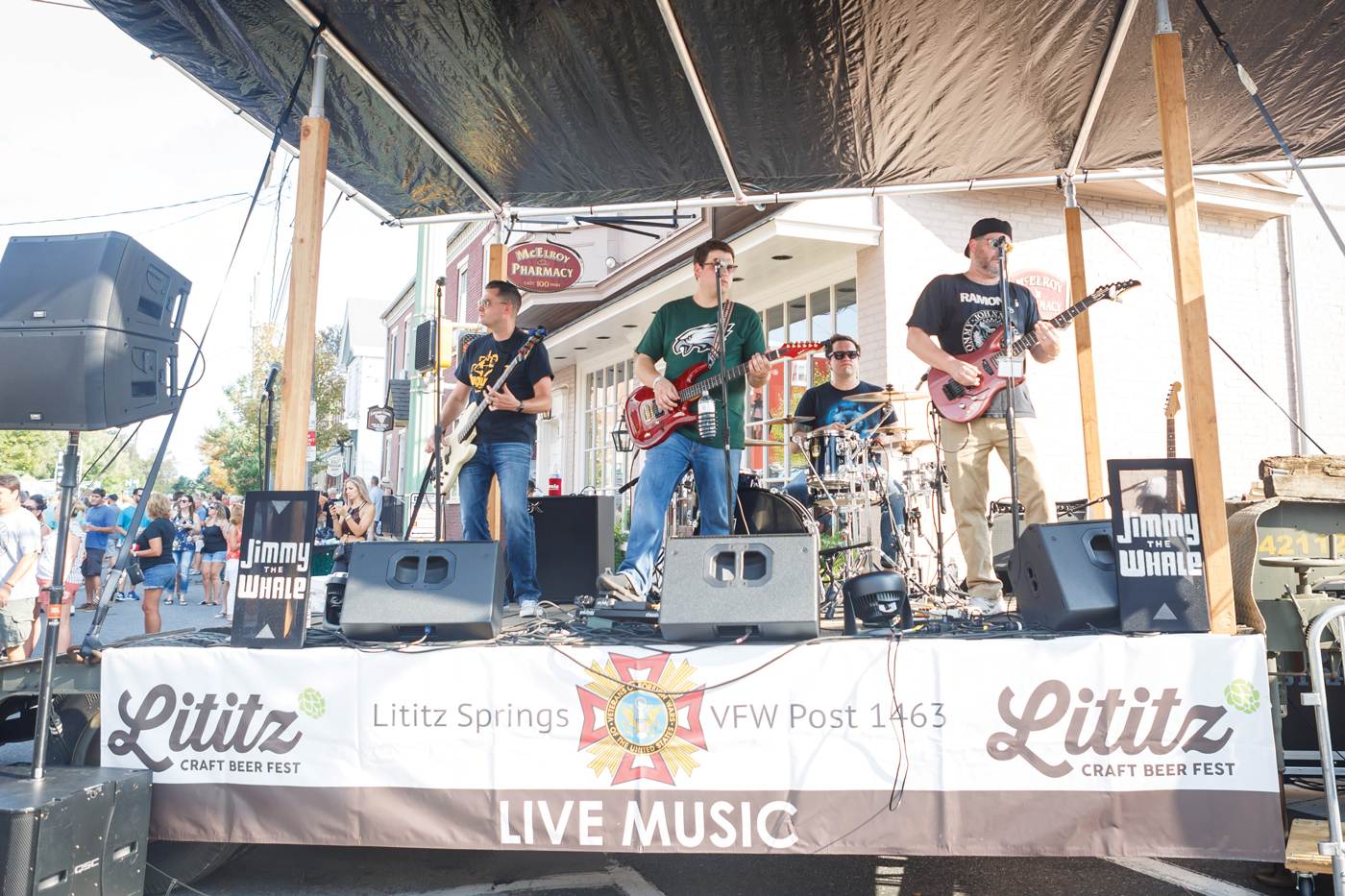 In 2019, the fest raised more than $98,000 after expenses, which ultimately found its way to 19 organizations and helped fund seven local programs including the Lititz Walk for PA Wounded Warriors, Lititz Hometown Christmas and EMS training scholarships. Local services benefiting from the perennially sold-out event include Aaron’s Acres, VisionCorps, TeenHope, United Disabilities Services and many others. To date, funds raised at the beer fest have accounted for $431,000 in charitable donations.

One of the most important cogs in the beer-fest machine is the Warwick Community Ambulance Association, which provides the nonprofit status for Pennsylvania Liquor Control Board requirements, supports the fest with an on-site presence and receives approximately one-quarter of the funds raised. For Jason and the other members, the ability to provide money to the ambulance association is key for a healthy community. Lititz AMBUCS has been a sponsor of the Warwick Community Ambulance Association since 1957, long before the idea of a beer fest was born.

“We have a great relationship with the organizations we support. Some even come and help as volunteers at the brew fest,” says Kim, who has tapped local resources to supply the human power to help run the event by taking tickets, replenishing water stations and filling the other small jobs on fest day. “For example, we have parents of children who go to Aaron’s Acres who come help. And, our people go in and help with some of their programs.” 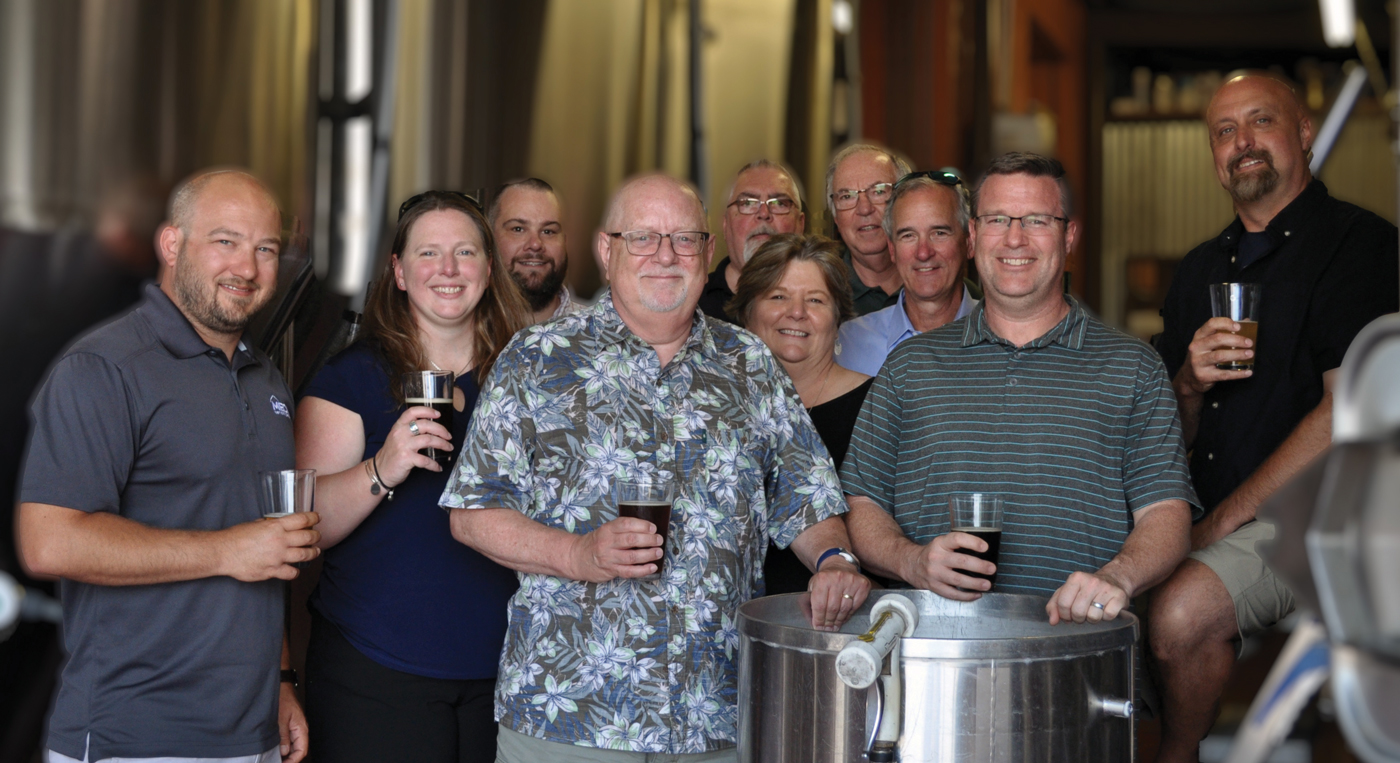 Members of the Lititz AMBUCS celebrate the success of 2019’s beer fest.

The three are quick to note the support the event receives from business sponsors, fellow community organizations and a large list of local volunteers – 2021’s volunteer list numbers over 300 people. “One of the neat things about Lititz is there is such a huge list of people who are ready to help with anything you need. If they don’t know someone, they are going to find someone,” says Patrick.

The National AMBUCS mission statement charges members to inspire “people to conquer challenges related to mobility and independence, through a nationwide network of volunteer chapters, working in partnership with physical, occupational and speech therapists.”

Part of the mission includes providing Amtryke adaptive tricycles to those who need them, as well as scholarships for therapists who aid folks with mobility challenges. In Lititz, this directive is headed by Tryke Team co-chairs, Tanya and Scott Myers. This year the local branch gifted a record 19 Amtrykes to neighbors. This is all due to the efforts of the beer fest. Prior to the fest funds, Lititz AMBUCS could manage only one Amtryke per quarter. “That has topped our record,” says Kim. “We could have never given away 19 Amtrykes in the past.” 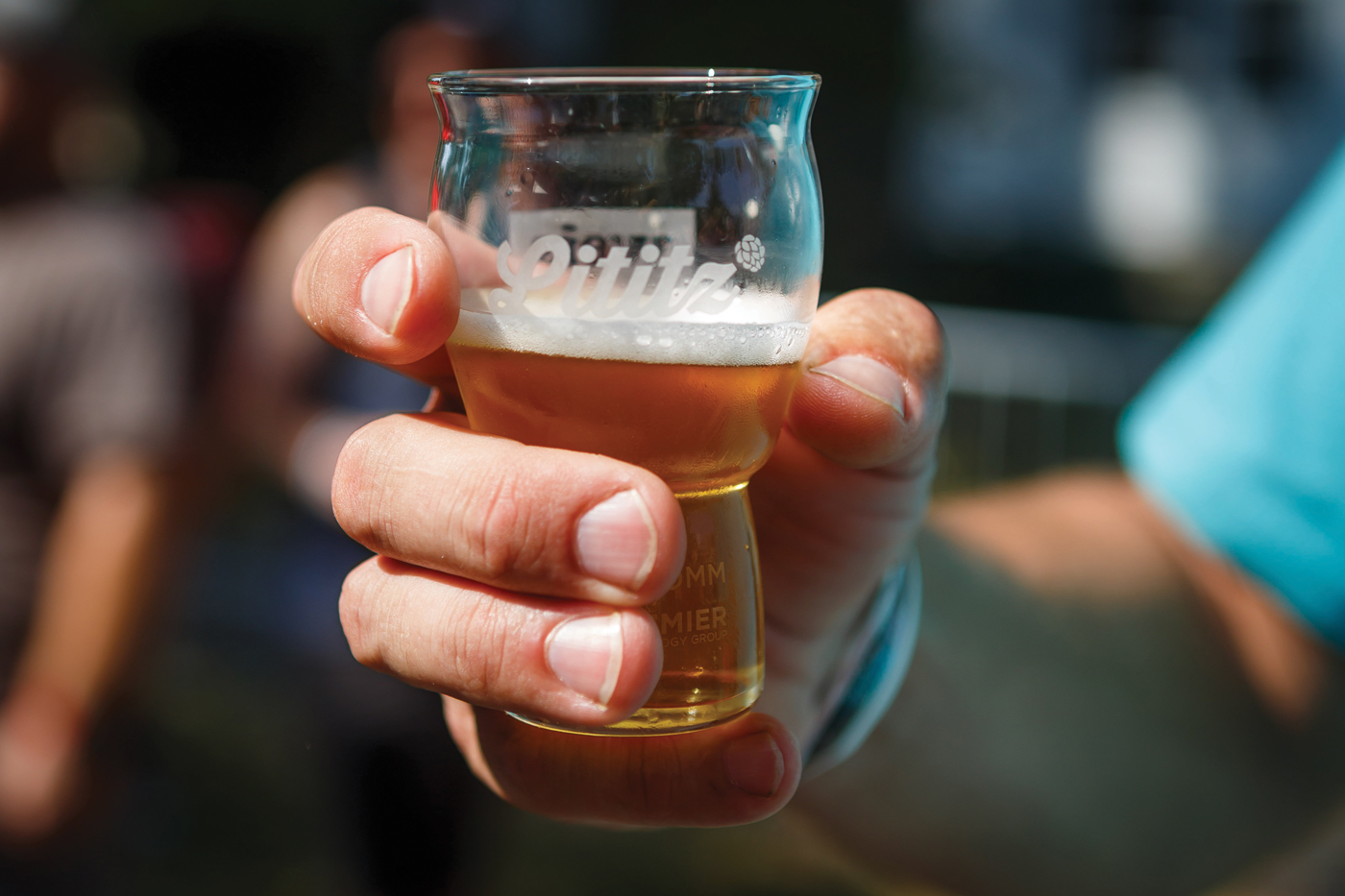 Amtrykes follow the national organization’s belief that everyone should have the opportunity to enjoy the fun and freedom of riding their own bike. These custom-designed rides offer a bike-riding experience to those who cannot operate a traditional bicycle and are specifically created and adapted to meet the needs of each rider. The national organization has provided over 40,000 Amtrykes to riders of all ages in the United States. The majority of these Amtrykes, which range in cost from $800 to several thousand dollars, depending on a rider’s needs, have been purchased by local chapters like Lititz AMBUCS and donated free of charge. The Myers’ involvement in AMBUCS is comprehensive – not only do they serve as volunteers but their professional roles as therapists are essential to the Lititz community. “The importance and usefulness of their work can’t be understated,” says Jason.

The Myers are pediatric physical therapists by vocation and work with local families to place Amtrykes, ensuring each recipient gets a ride to meet his or her individual needs, whether they have cerebral palsy, polio or other physical challenges. Their work is present in local schools and through private practice. “A lot of our clients do not have access to affordable tricycles and other equipment,” explains Tanya. “They are so appreciative to get out and do the things others are doing. They just love to be free and just get out and move.”

Each bike is built to the individual’s needs. For example, those who have limited use of their legs can have a hand crank installed. Younger riders can work on their balance while an adult steers with a handle if needed. Special seats can be installed and adapted. Base units of the Amtryke come in a myriad of sizes and shapes. 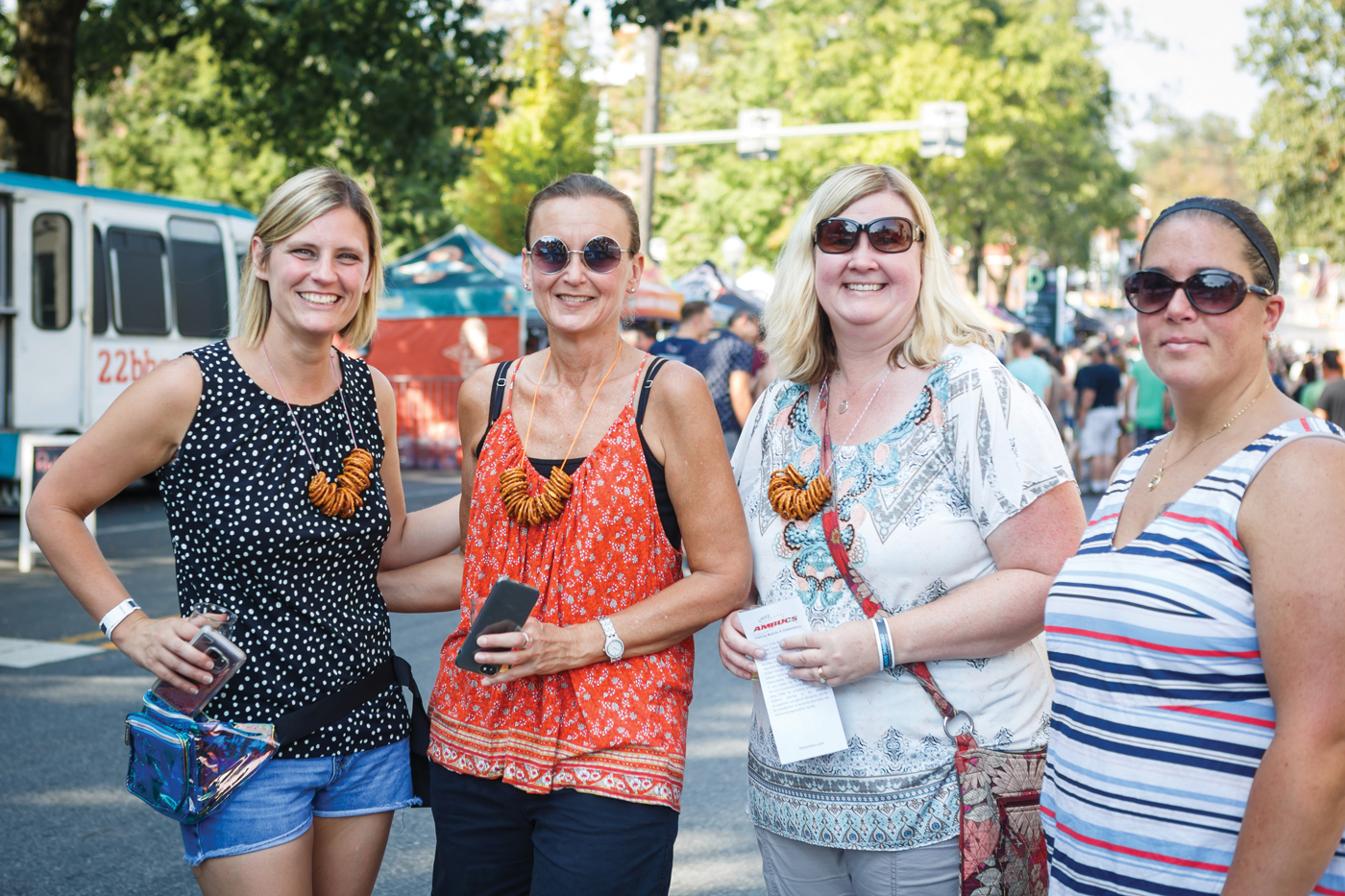 The ladies are loving craft beer! According to the Brewing Association, 31% of those who imbibe are women.

The Lititz branch distributes Amtrykes to residents of Lancaster and Lebanon counties. The program is another way proceeds from the fest stay local. “Being there when we give an Amtryke just melts your heart,” says Kim. “The kids are so excited because they can spend more time with their families. They have a bike they can operate.”

“And, these just aren’t for kids,” adds Jason. “In 2018 we donated an Amtryke to a U.S. Army veteran who busted up his leg in one of the entanglements in the Middle East.”

Nationally, AMBUCS has provided Amtrykes to nearly 600 veterans. The organization is willing to provide a Road Show upon request (more info can be found at AMBUCS.org/riders/veterans) and bring a “trailer-full of trykes and adaptations, free of charge,” to help create a veteran-focused program in any community. “It’s an important thing to note because veterans facing mobility issues are an underserved portion of our community,” says Jason.

Beyond Amtrykes, AMBUCS helps to provide items such as speech devices, entertainment/educational consoles and therapeutic aids for students working with therapists like Tanya and Scott Myers. Scholarships for physical and occupational therapists are also one of the pillars of AMBUCS’ giving. National AMBUCS awards scholarships to students pursuing degrees in physical therapy, occupational therapy, speech language pathology and hearing audiology. A portion of the money raised by the fest adds to the more than $9.3 million in scholarships the national organization has awarded to more than 16,000 students. 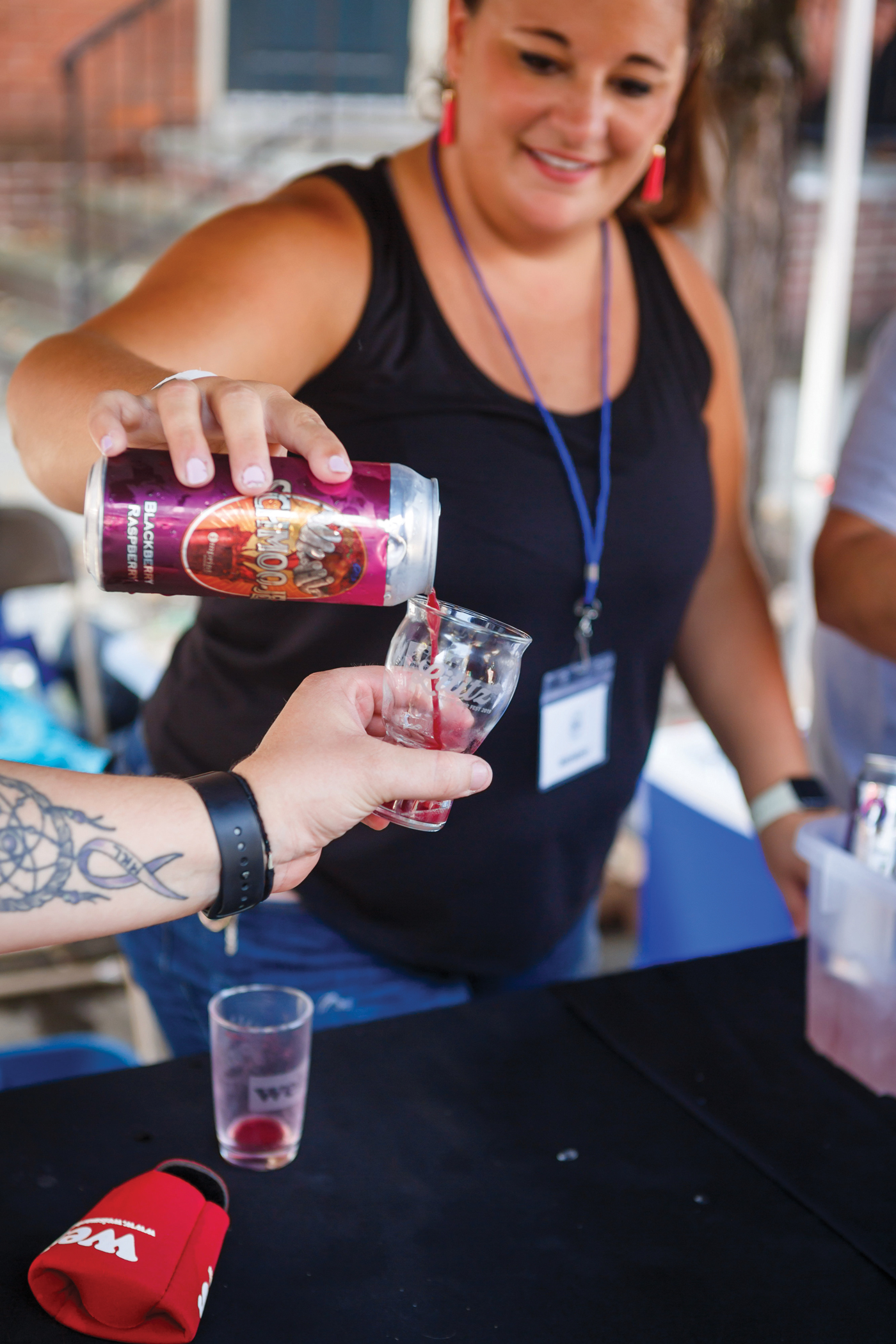 More than 50 craft brewers will be represented at this year’s beer fest.

Because of some changes due to COVID-19 restrictions, this year’s event – September 25 and 26 – is a one-off beer celebration covering two days with three event times. That means there are three times the number of tickets to go around, potentially tripling the money to be raised for area charities and civic organizations. Saturday’s sessions will begin at 11:30 a.m. and 4:30 p.m., while Sunday’s will start at 2 p.m. Instead of happening on the streets of downtown Lititz, this year the fest will be temporarily relocated to the TAIT facility at 401 West Lincoln Avenue. (Jason and Patrick say the plan is to return the fest to the streets of downtown in 2022.)

Each year the festival brings in over 50 breweries from around the world. New breweries for this year include names like Dancing Gnome Brewery from Pittsburgh; Big Oyster Brewery of Lewes, Delaware; and Human Robot Brewery from Philly.

The Lititz AMBUCS is always open to new members. The club holds meetings on the first and third Wednesdays of each month. “We are always looking for new members that have a passion for helping to inspire mobility and independence for others. We have opportunities available to assist with programs at all levels: committee chairs, fundraising or simply providing new ideas,” explains Kim.

“Anything that promotes access to people with disabilities, we are all over that,” adds Jason. “That’s our thing: to help the people who are helping people with developmental and intellectual disabilities.”

For information about Lititz AMBUCS, email info@lititzAMBUCS.com or visit lititzambucs.com. There is also a Lancaster City chapter. For information, visit lancasterambucs.com. 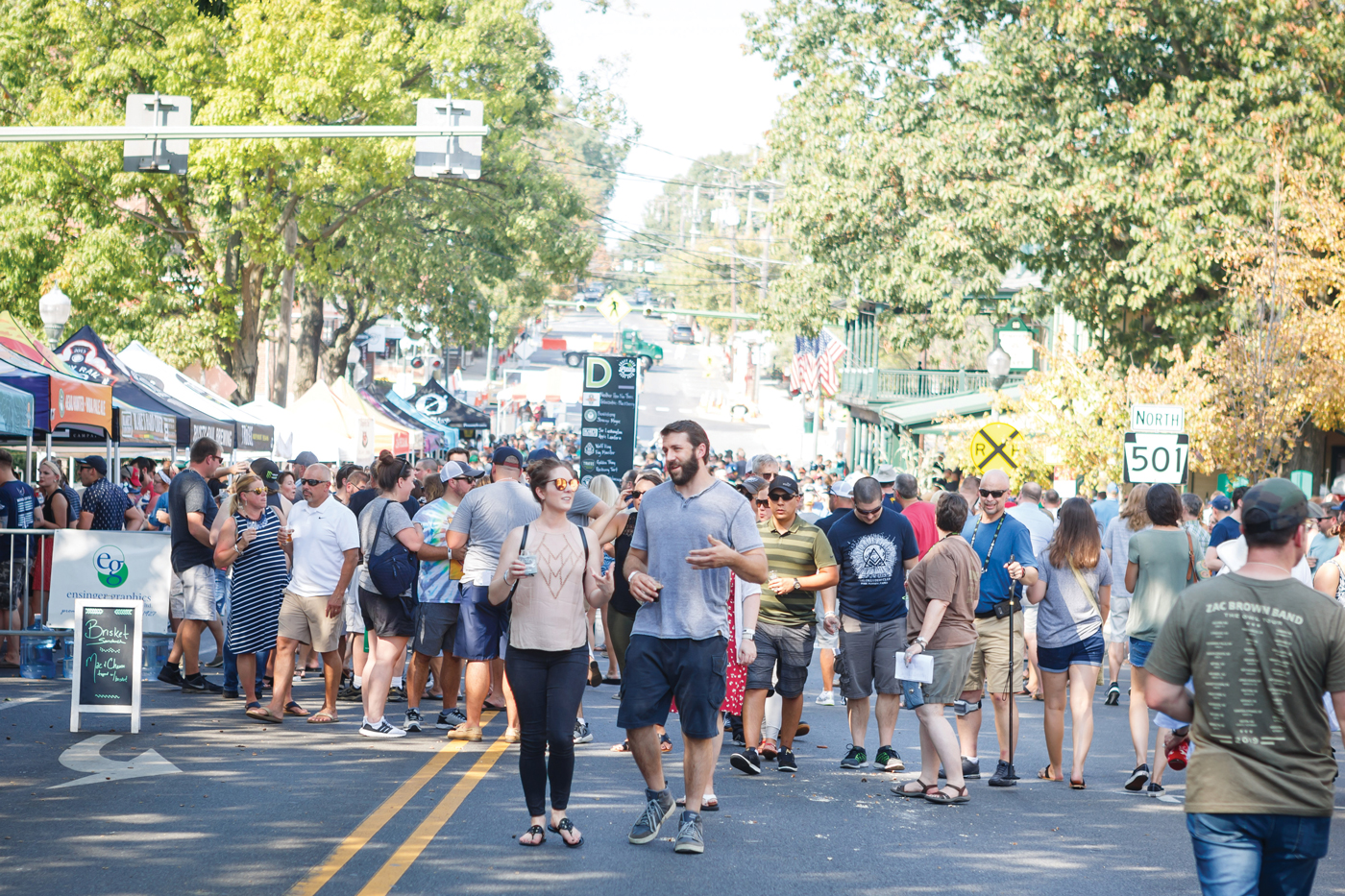