When Listrak’s owner, Ross Kramer, dreams, he dreams big. Just check out the 93,000-square-foot headquarters he and his father, Howard Kramer, built at 100 West Millport Road in Lititz. It’s a sprawling, modern center of technology and talent, laser-focused on helping Listrak’s 1,000-plus clients deliver email, text and marketing messages to promote their brands and sell, sell, sell. 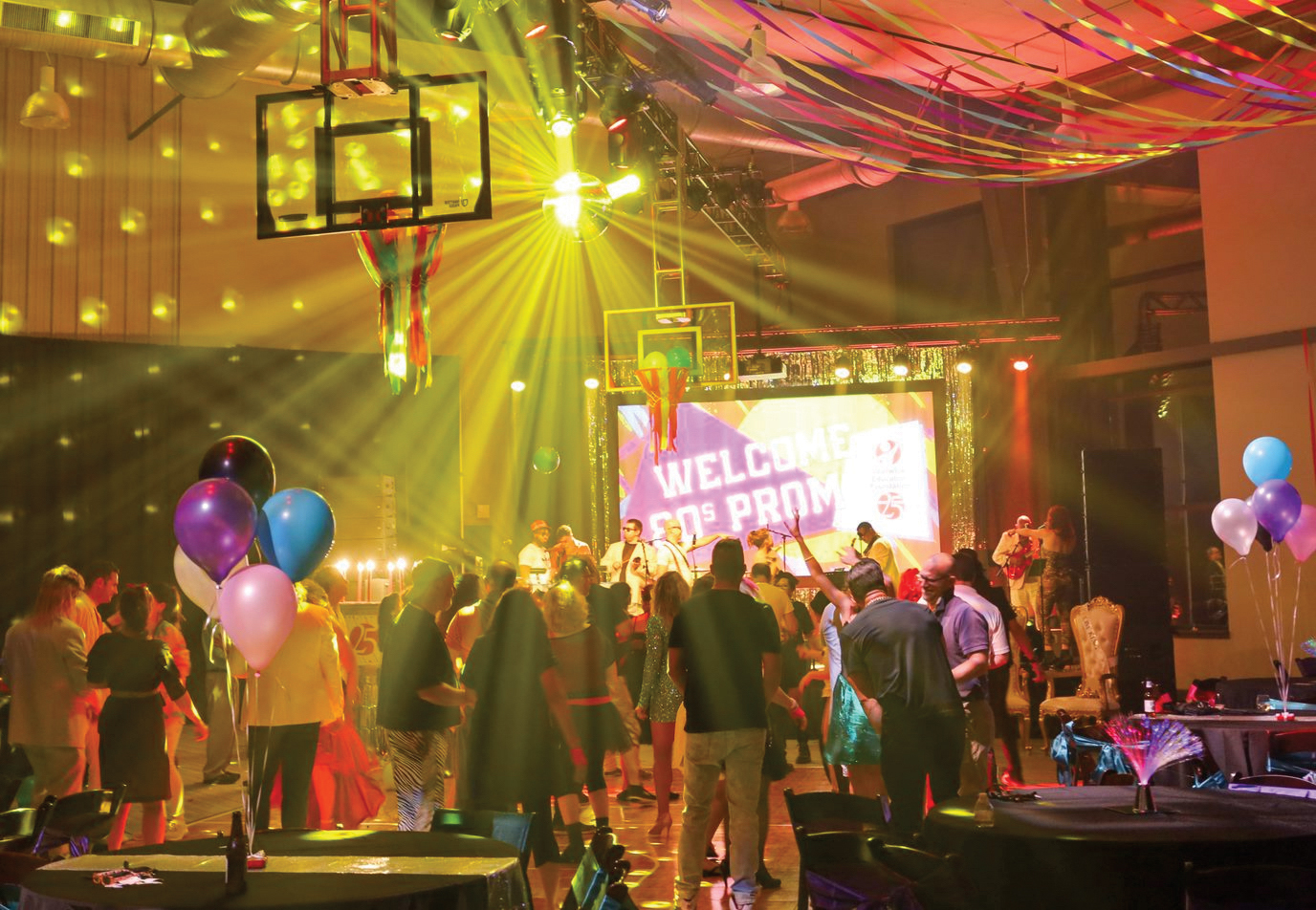 Listrak’s Lititz headquarters was the scene of two back-to-back “Back to the ’80s” benefits – one for the Schreiber Center for Pediatric Development and the other for the Warwick Education Foundation (WEF). Party fare was served and dancing was held in a space that was transformed into a high school gymnasium, with the basketball court serving as the dance floor.

But Listrak’s headquarters is more than a workspace. It’s a space for celebrating. And celebrating was on Ross’s mind when he offered two of his favorite nonprofit organizations – Warwick Education Foundation and Schreiber Center for Pediatric Development – the deal of the decade: a party space, fully decorated and themed, for their annual fundraisers. In other words, back-to-back parties that shared a common theme, while entertaining and fundraising with their own unique guest lists of patrons. Synergy at its best!

The two organizations’ plans for their mutual ’80s Prom Night-themed events were actually formulated for two nights in 2020, but – well, you can guess the rest of that story. Post-pandemic, the party-goers were primed for a major celebration, so in May 2022, they picked up where they left off and got into the spirit of dressing in ’80s style, big-time.

The wait was well worth it! Guests were dazzled by the ’80s-centric decorations and props, overseen by the creative team at Stray Production Services. The Stray crew set to work on creating a cool entrance to the party space that would set the mood and provide a perfect photo op: a graffiti tunnel that harkened back to ’80s pop culture, including MTV, the ubiquitous boombox and posters of the hottest bands of the time. Stray’s event designer, Melody Strayer, confides, “We even put a few ‘Easter eggs’ in the graffiti – some of our employees’ names, the initials of the Listrak owners, Ross’s college and more.” 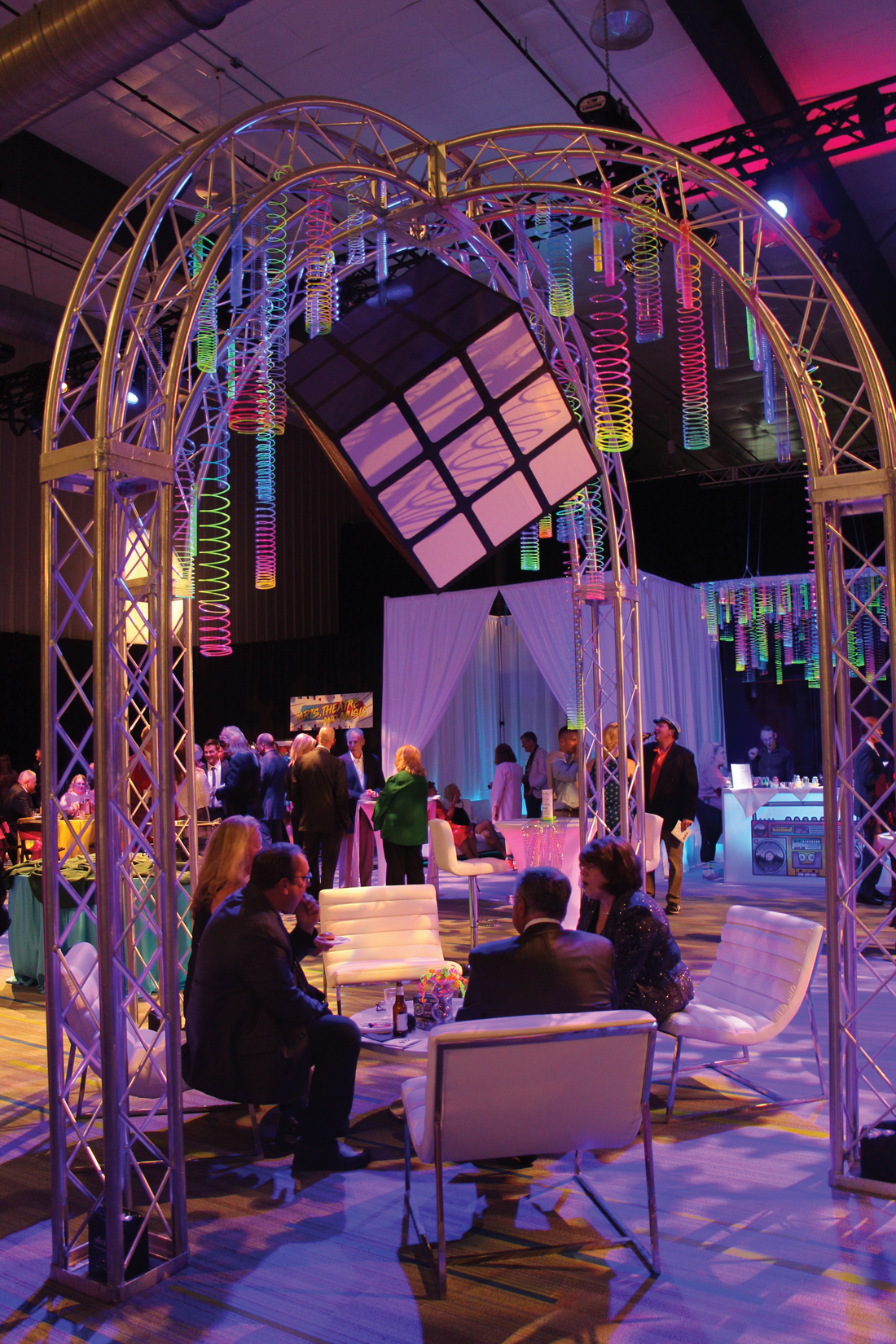 At Schreiber’s event, guests began the evening with cocktails and a silent auction that were held in a space that was decorated with a giant Rubik’s Cube and neon Slinkies.

“Listrak has such a cool space that lends itself well to separate cocktail and banquet areas,” Melody observes. “We knew that we wanted the banquet area to have a completely different feel than the cocktail area; the idea to turn it into a 1980s gymnasium-prom was born from a Stray brainstorming session.”

She recalls, “Much of the budget had already been allocated for big builds like the graffiti tunnel entrance, and there wasn’t enough left over to source fancy linens and chairs. I was specifically trying to figure out how to make folding chairs work with the overall design, and someone said, ‘What if we turned it into a prom in the gym?’ since lower-budget linens and chairs would be typical for an event like that.”

The idea was a winner with the Kramers and morphed into adding basketball hoops and miles of streamers, thus turning the dance floor into a basketball court. “One thing I love about Listrak and the Kramers is that they are always up for nonconventional ideas, and they give our team so much freedom to run with the vision,” says Melody. “Our prom was complete with matching prom king and queen thrones, sashes and crowns – a perfect selfie opportunity!” 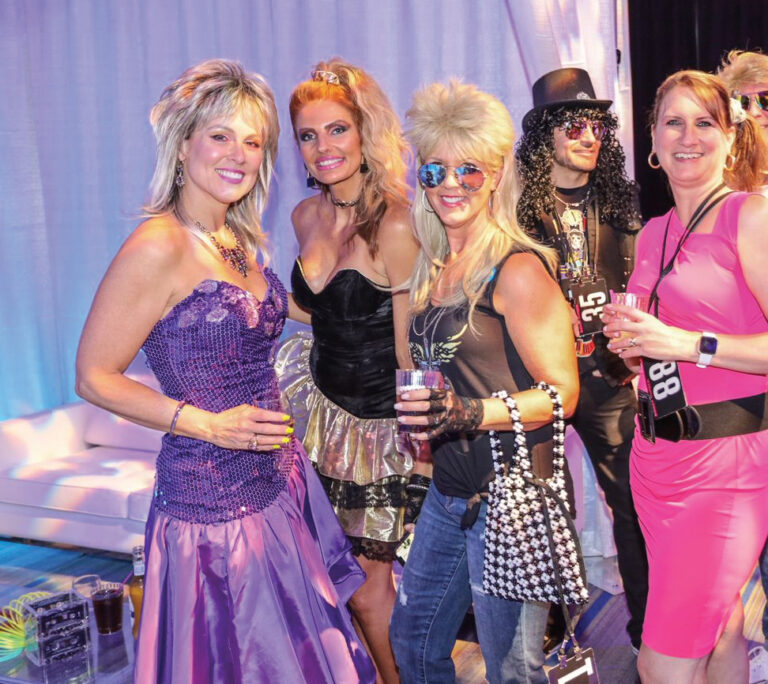 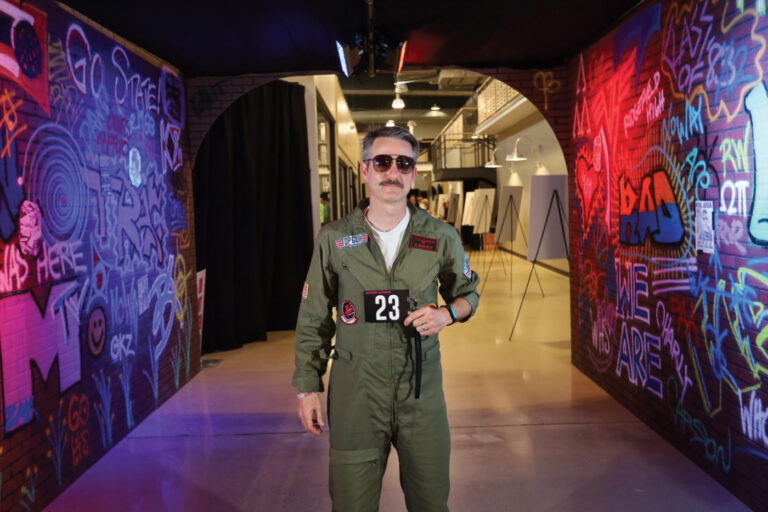 Who knew Top Gun would be both nostalgic and current? Welcome to the WEF party, Maverick! 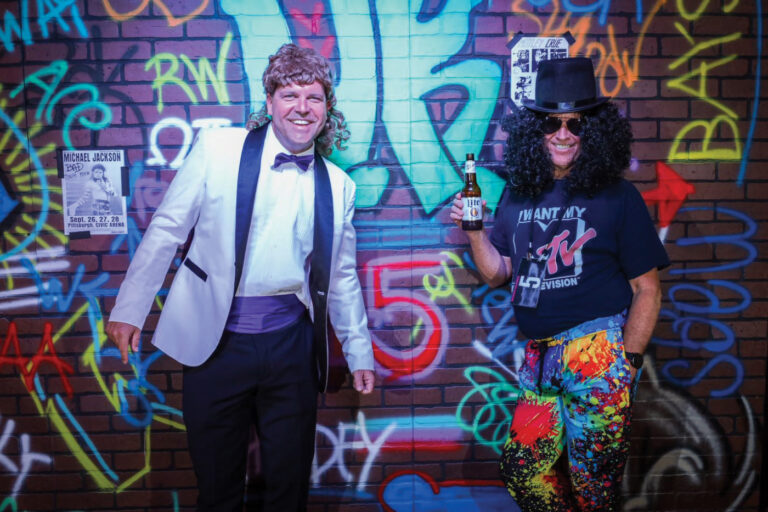 Listrak co-founders, Ross and Howard Kramer, got into the spirit of the festivities and appeared as Prom Dude and Slash from Guns N’ Roses. The backdrop is a graffiti tunnel that was created by Stray Production Services. 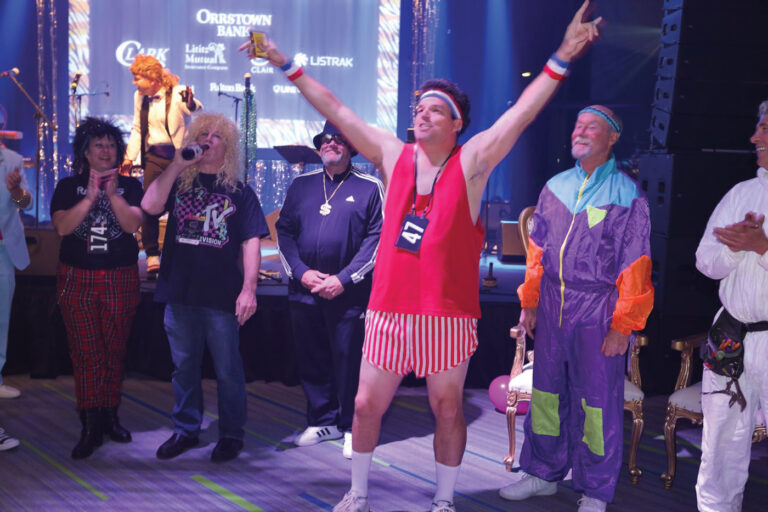 Winner of the WEF costume contest! A Richard Simmons look-alike! 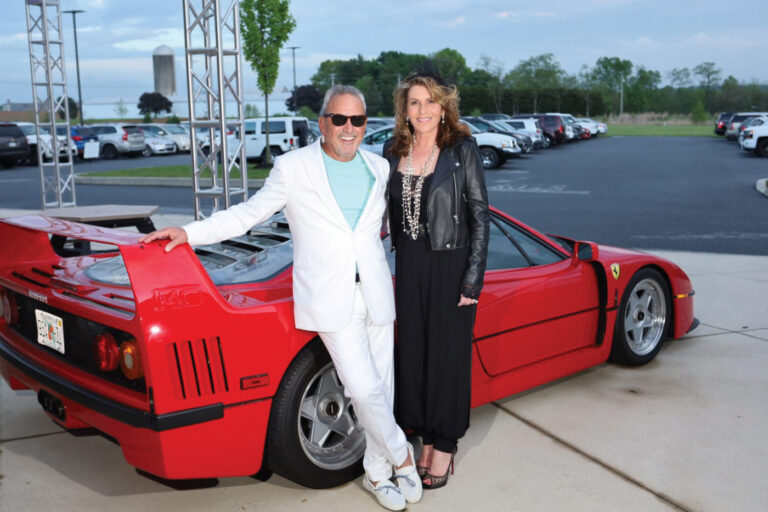 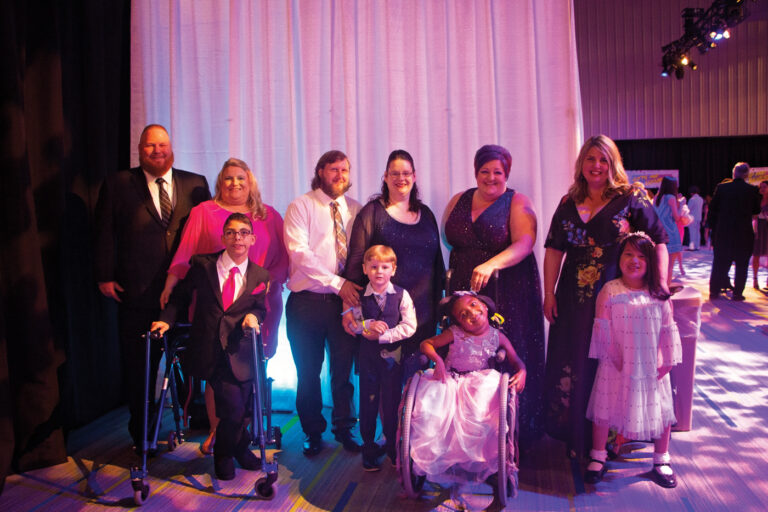 The reason for Schreiber Pediatric’s event – helping these and many other families obtain pediatric therapy for their children. 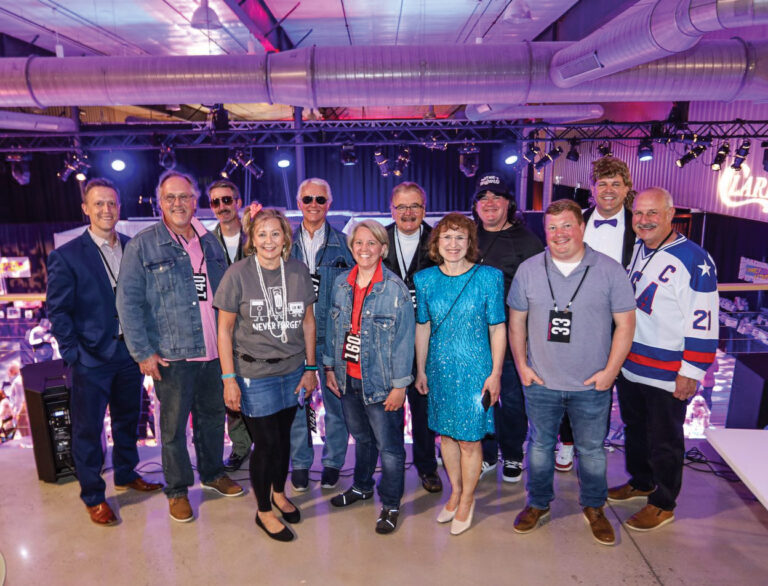 Warwick Education Foundation’s board of directors was thrilled with the success of their fundraiser.

Listrak’s in-house party-planning committee worked in tandem with Stray Productions, as they sourced most of the nostalgia-inspired centerpieces including Rock ’em Sock ’em Robots and fiberoptic lights. Stray’s crew suspended a giant Rubik’s Cube and a sea of neon Slinkies in the cocktail areas to enliven the bar and seating areas.

A six-piece horn band announced the end of the cocktail hour with The Final Countdown, leading guests into the “gymnasium” for a live auction, dancing, party fare and a costume contest that propelled a Richard Simmons look-alike to stardom.

Warwick Education Foundation, which held their party on Friday night, was celebrating 25 years of providing over $2.4 million in teacher grants. Those grants are used to support Warwick School District educators’ efforts to go beyond their budgets to create innovative learning opportunities. For example, Bonfield Elementary School’s Emily Craig, a reading specialist, was able to provide every one of her students with a book to read as a family and a reading calendar. She also brought guest author speakers into the classroom. Students of Warwick High School’s Sarah Martens received solar-panel kits to help them better understand how the sun can power at least a part of our future energy needs.

After Friday night’s Bon Jovi and Madonna look-alikes departed and retired their spiked wigs, t-shirts and fishnets, Listrak’s party space was spotlessly cleaned and the tablecloths were changed. Twenty-four hours later, a new crowd of ’80s-clad partiers was on hand to support an equally compelling cause at Schreiber Pediatric’s 38th-annual gala: providing therapy to Lancaster County’s children who have special needs.

After two years of putting his party plans on ice, Ross Kramer was able to say to the appreciative crowd, “Thank you for being part of our dream.”

Listrak’s Lititz headquarters was the scene of two back-to-back “Back to the ’80s” benefits – one for the Schreiber Center for Pediatric Development and the other for the Warwick Education Foundation (WEF). Party fare was served and dancing was held in a space that was transformed into a high school gymnasium, with the basketball court serving as the dance floor.