Lancaster City resident Salina Almanzar’s stacked portfolio of multifaceted work is rooted in drawing connections. From connecting with her neighbors, her family and their history, and Latinx heritage to connecting with educators, kids and the community at large, her work is bridging gaps and connecting communities with a unique artistic flair. 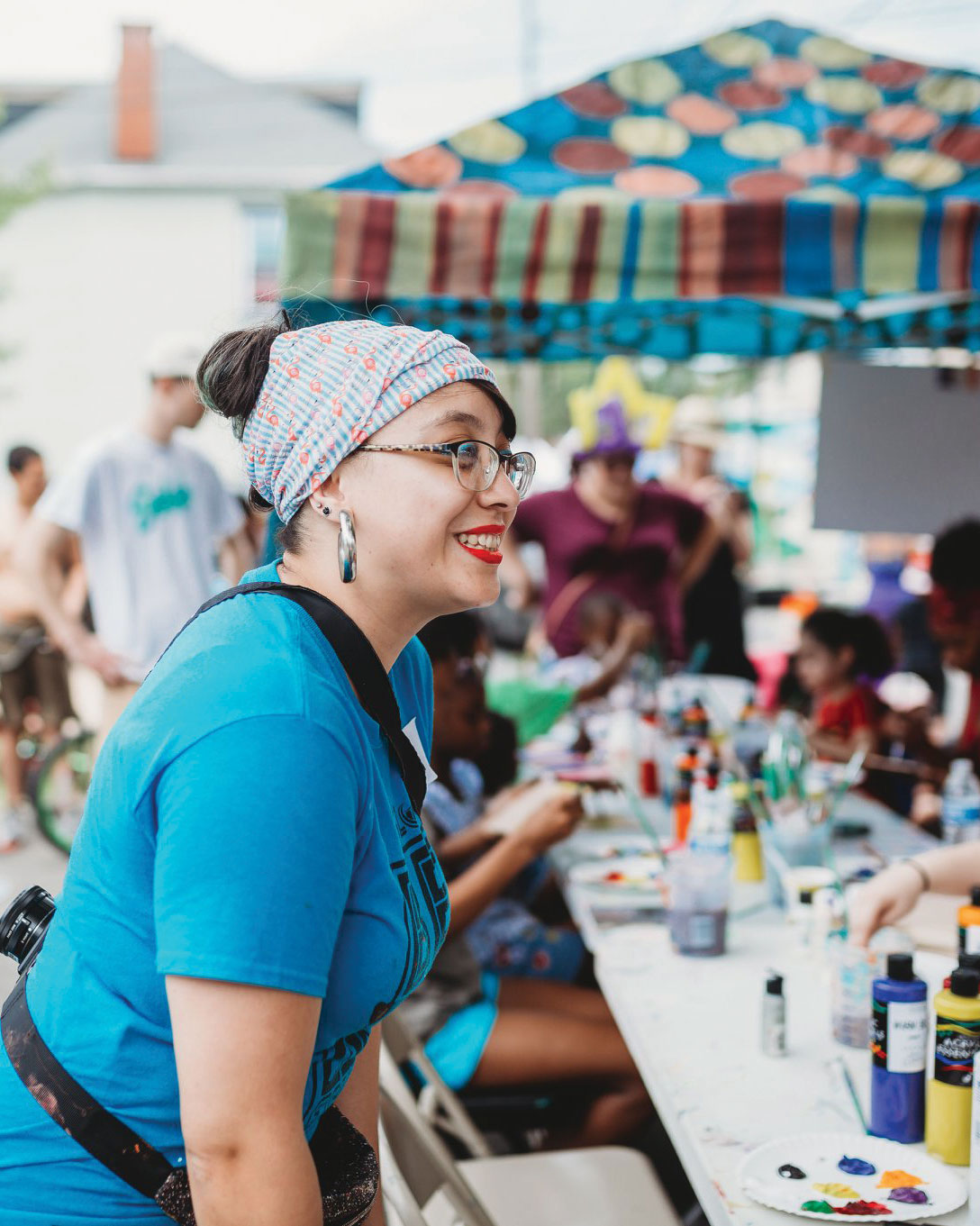 Born and partially raised in the Bronx, New York, Salina calls Lancaster home and has spent most of her life in the southeast area of the city. When talking about Lancaster, she explains, “The deep sense of community and collaboration [here] is really important to me in my community-based art practice. That ease of connecting with neighbors and even city council members or the mayor makes it such a different experience than if I was an artist in a big city.”

The Artist at Work

Make no bones about it, Salina is putting the work in. Professionally speaking, she wears quite a few hats, all the while pursuing her personal artwork. She is not only the youngest, but she is also the first Puerto Rican woman to be elected to the School District of Lancaster’s school board. She is also a studio tech at Franklin & Marshall College, a job she has held since she was a student wrapping up her bachelor’s degree. “I graduated in 2013 with a BA in Studio Art and English Lit and basically never left! It’s been such a blessing,” she says of her work with F&M, where she often helps with programming and outreach, connecting city neighborhoods with the college. 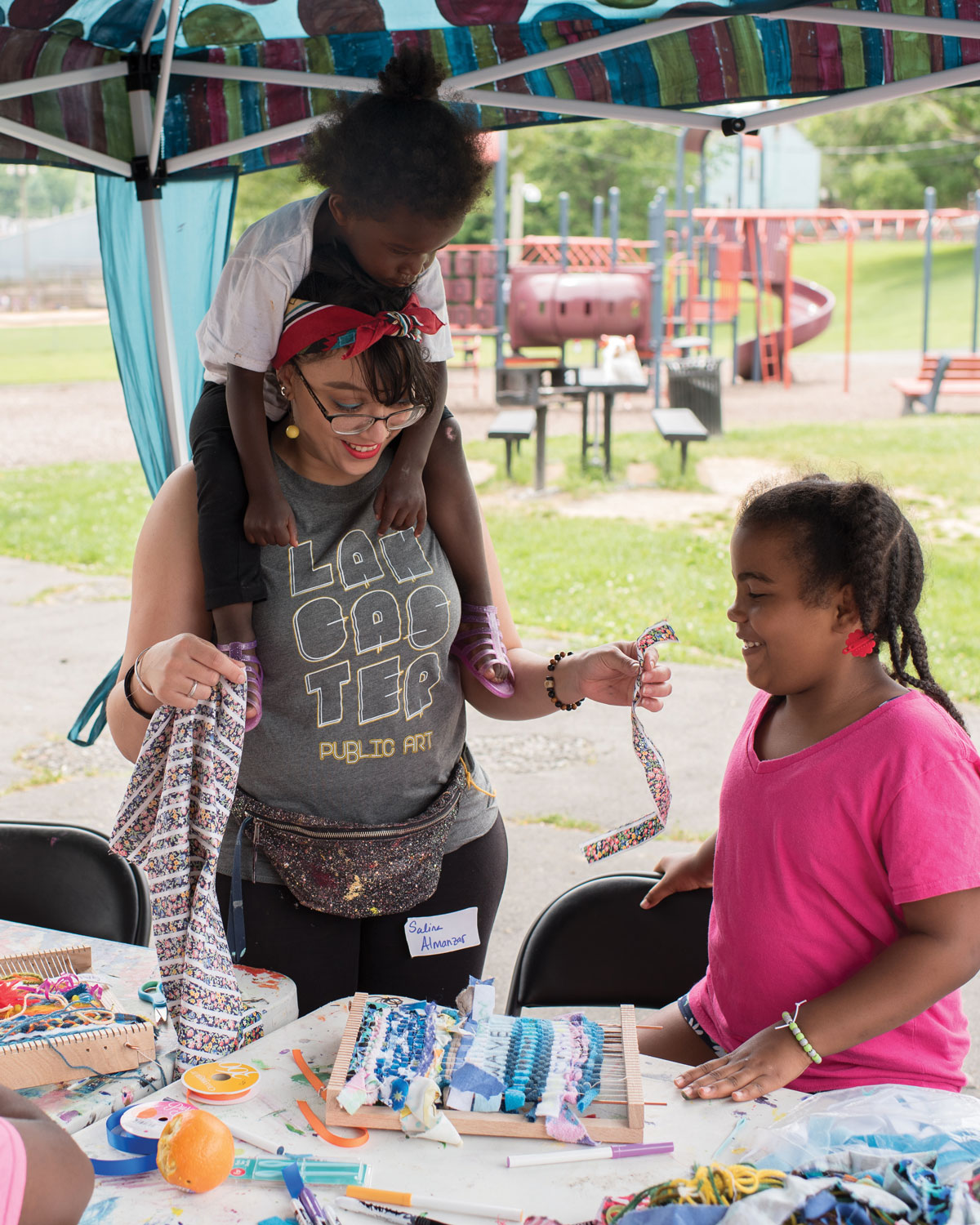 Salina’s education in the arts didn’t stop there. She went on to receive her master’s degree in Arts Administration from Drexel University with a thesis on “examining creative placekeeping in the Latinx community here in Lancaster.” She maintains a position as an adjunct professor at the university as well.

Putting that knowledge and experience to work, she has also been working as a teaching artist in community through Lancaster Public Art (LPA) for two years. True to form, LPA “focuses on equity, livability and excellence to promote neighborhood connectivity, create meaningful collaborations and magnify Lancaster’s distinct sense of place” as its mission. Additionally, Salina receives support from Lancaster County Community Foundation (LCCF), the Baldwin Fellowship, and serves on several local committees including (but not limited to) the South Central PA Partners for the Arts and the Latino Empowerment Project.

Much of Salina’s work has been focused in the southern end of the city and the neighborhoods in which she was raised. Through LPA, she has co-created a mural on the side of the Water Street Mission building entitled “This Neighborhood is …” Right across the street from the mural – at the newly renamed Culliton Park – she has also hosted Art Pop events and free art and craft workshops through LPA’s PACE program. “The work in Culliton Park has been challenging because of the history of trauma on Water Street. So many folks I interact with have heavy burdens, and it’s amazing to see how a listening ear and some paint can shift attitudes,” she says of her time there. “I see folks living in transition in the park or battling addiction alongside some of the most adorable and enthusiastic kids ever. There’s a part of me that wants to help everyone, but I know I can’t,” she explains. 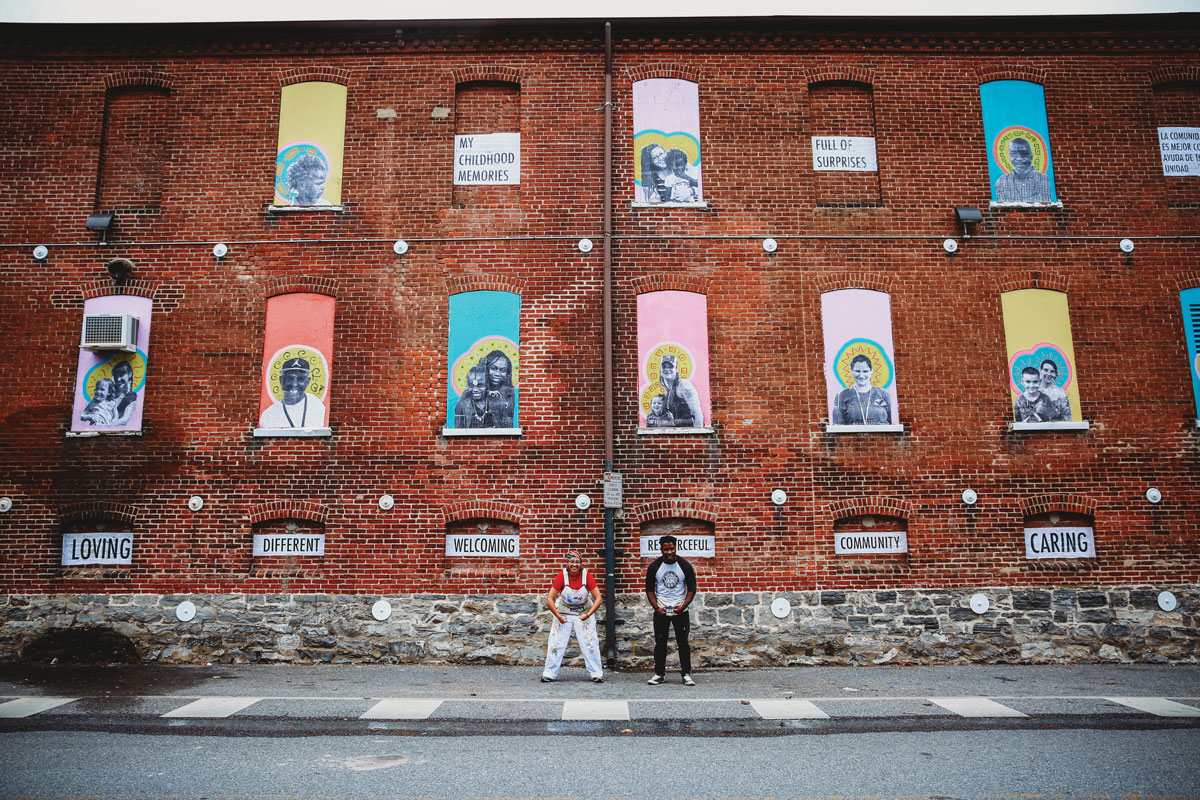 Salina and her “fiancé/art partner in crime,” Osmyn Josef Oree, pose in front of their Water Street installation. Neighbors were invited to answer the fill-in-the-blank question “This neighborhood is ___” as well as sit for portraits by the artists. The results were included in the mural. Photo by Michelle Johnsen.

With plenty of work on her plate, Salina is far from being in it alone. In addition to the love and support of her family, “my fiancé and art partner in crime, Osmyn Josef Oree, works closely with me as a photographer and collaborator,” she points out. “Last year, our mural project on the Water Street Mission was recognized by Americans for the Arts as one of the top 50 public art projects in the nation,” she continues. The couple plans to tie the knot next year.

Their mural project included a lot of community engagement. Neighbors and park regulars contributed to the subject matter and were asked to sit for portraits that would become part of the building’s façade. “The most rewarding thing is seeing folks’ faces light up when they see their work on display or their faces reflected in a mural,” she says of the work on Water Street. 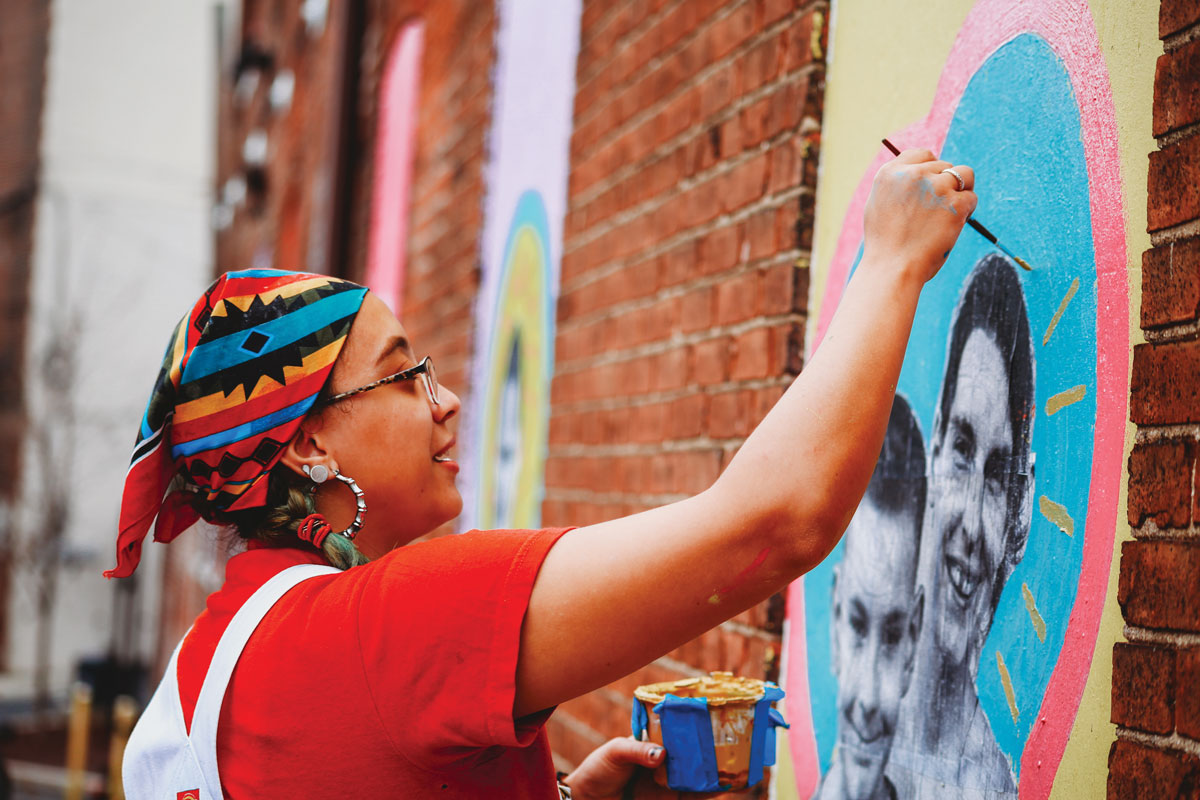 alina works on one of the mixed media portraits of local residents for the “This Neighborhood is …” mural project on the façade of the Water Street Mission building. Photo by Michelle Johnsen.

Another enterprise coming to fruition for Salina is the opening of Café Pa’lante, the proposal for which she just received the third-place ranking in the Great Social Enterprise Pitch (a Central PA business plan competition that emphasizes social and environmental impact). A Latinx café and cultural space, Café Pa’lante will utilize traditional brewing methods and cooking. The café will also serve as a place for education and community in the heart of Southeast Lancaster City. “This has been a dream of mine for quite some time, so I’m eager to get started!” Salina says of the project.

In keeping with her professional work, much of Salina’s personal artwork draws life from connecting with her culture and community. “I feel so humbled and rewarded when I see folks recognize themselves in my work. A lot of my work has to do with finding my identity and exploring the history of my family, as well as Puerto Rico and the Dominican Republic; so often, these stories are left out of mainstream retellings of history,” she explains.

Salina was recently named a Baldwin Leadership Fellow through LCCF and with that title plans to begin a project she has been aching to do. “I will be documenting the stories of Puerto Ricans in Lancaster, asking folks to talk about how they got here, how they make it their home, and what they want to see in their future,” she explains. 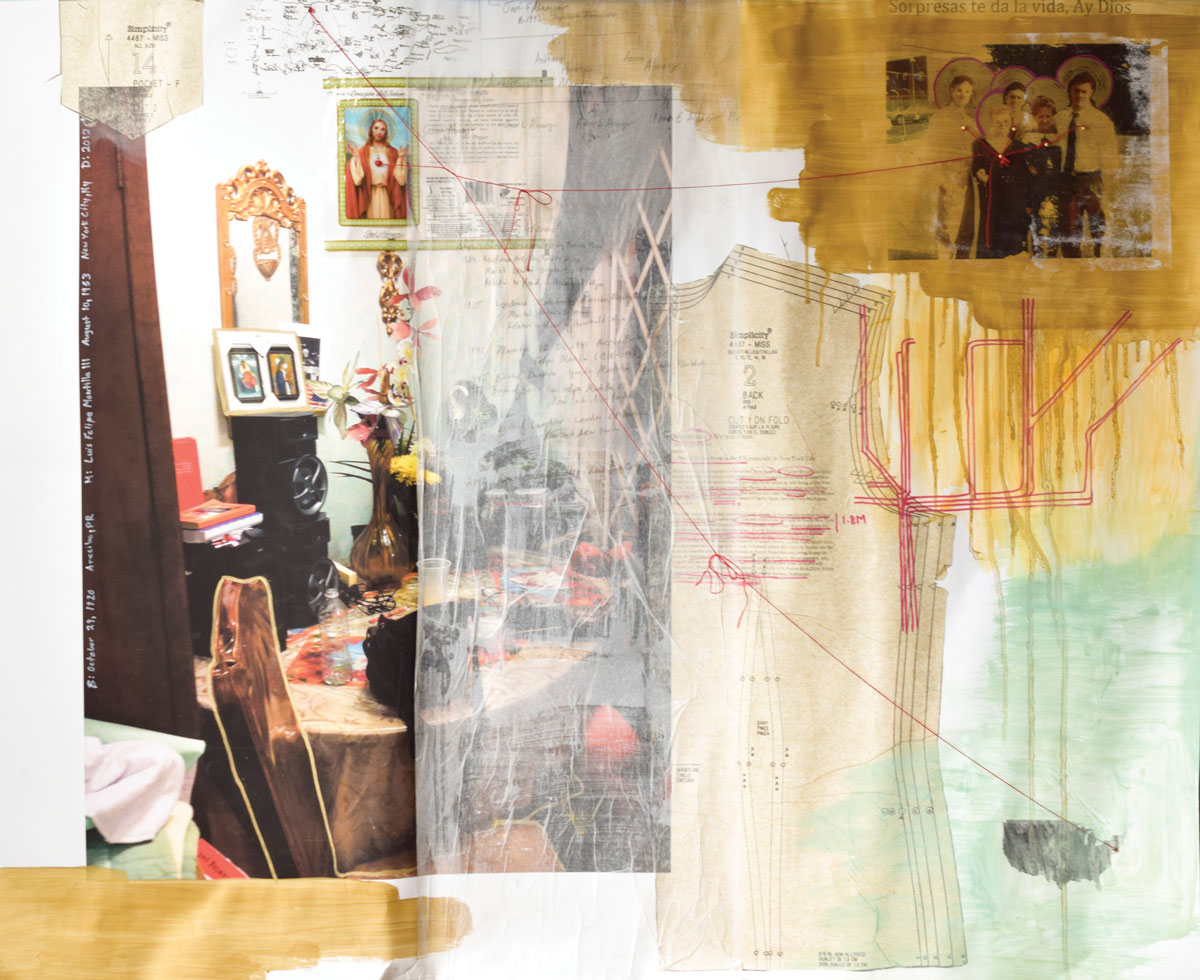 Salina’s personal work reflects the mapping of her connection with her family’s history, Latinidad culture and Dominican and Puerto Rican heritage, through collage and mixed media. She often sources material from her family momentos and photos. 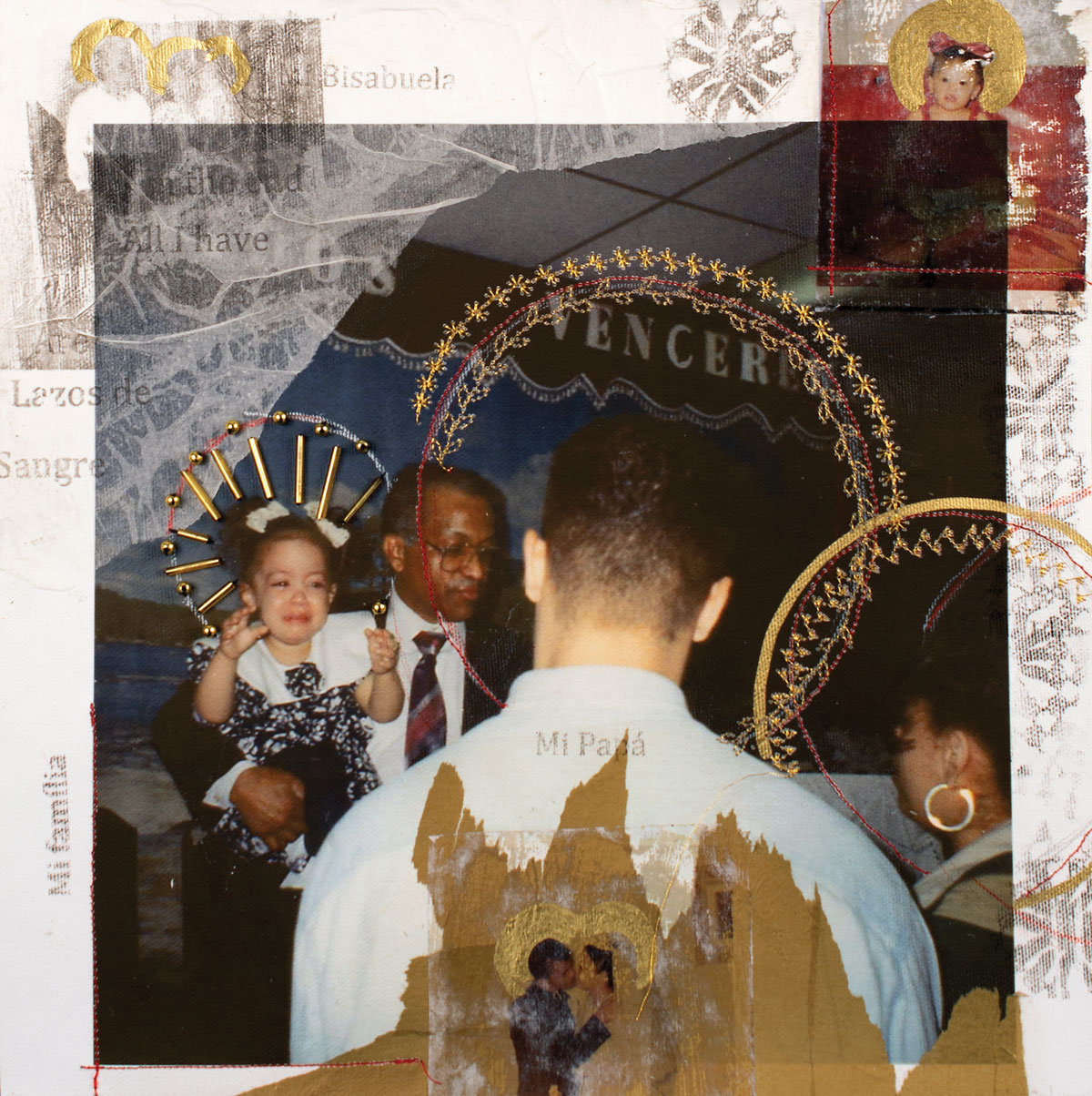 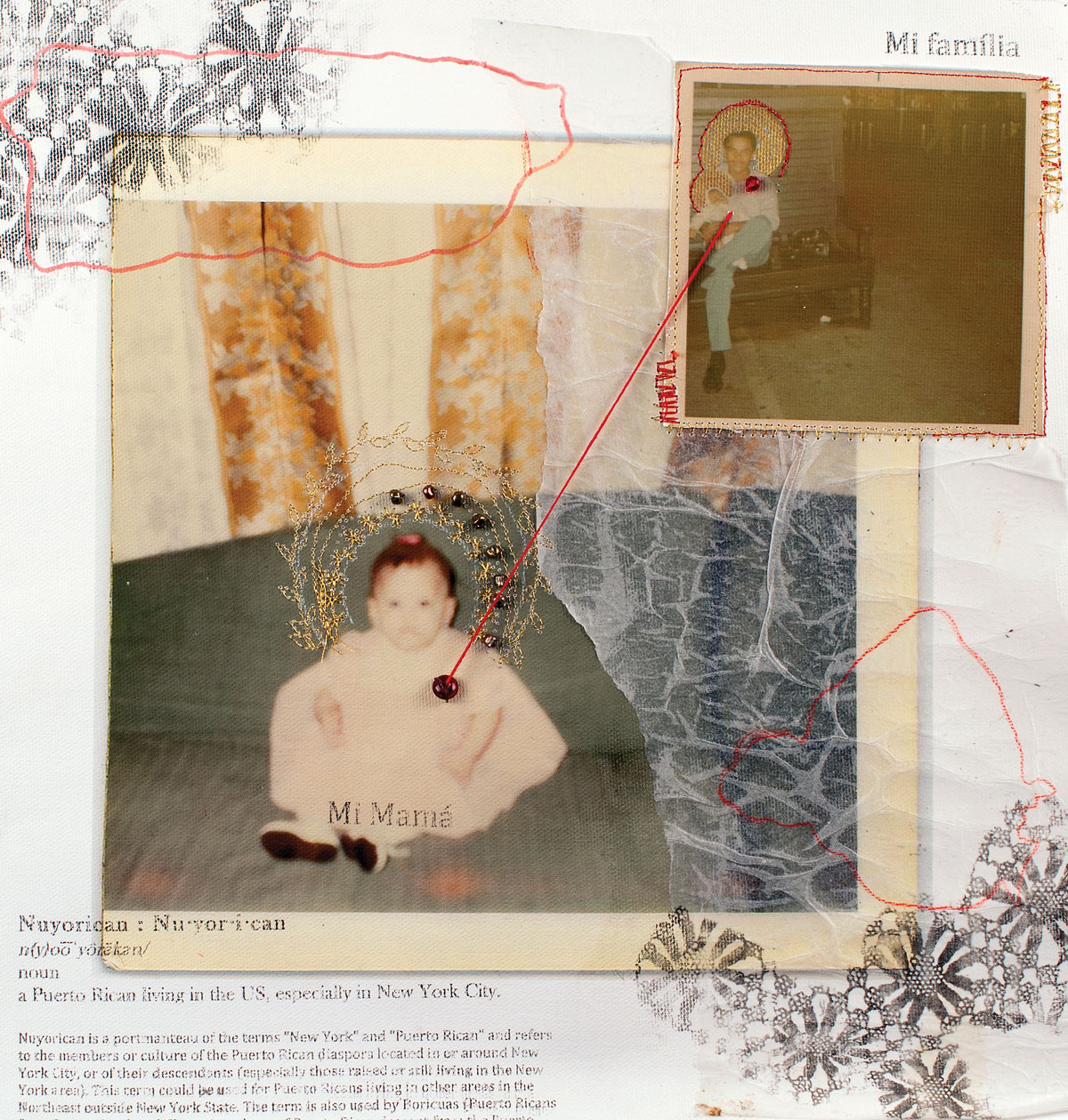 As a Latinx Lancaster transplant, Salina’s work often explores the intersections of identity and finding one’s place. “Lancaster City and County are so rooted in generational histories of belonging and, when you’re a transplant, you can sort of feel like an outsider. Much of my personal art practice is rooted in understanding Latinidad as it exists in these in-between spaces,” she explains.
Salina’s take on the role art plays in the community is, “Art is the language we use to communicate who we are, what we value and who we want to be as a community. I think public art projects are great ways to bring communities together. Art allows us to connect across differences.”

alina works on one of the mixed media portraits of local residents for the “This Neighborhood is ...” mural project on the façade of the Water Street Mission building. Photo by Michelle Johnsen.