Have you ever visited a beautiful winery and with a delicious sip of wine thought to yourself, “I would love to own a winery.”?

I have – many times. My husband and I dream about what grapes we’d grow, who we’d court as investors, what our tasting room would look like and what we’d name our winery.

When I learned Gap’s Twin Brook Winery was for sale, I posted a link to the listing on my Facebook page with the caption, “Anyone interested in buying a local winery?” From the comments I received, it’s clear I am not the only one with this dream.

But owning a winery does not equate to sitting back with your feet up and sipping wine every day. According to Joyce Rigby, the former director of vineyard operations at Hauser Estate Winery near Gettysburg, it is hard work and a labor of love.

She says the first step in considering any winery purchase is to partner with a consultant to assess the health of the vineyard and the winery’s operations. “You need an expert to take a look at things like: Has the vineyard been taken care of? Does the soil drain well? Does the winery have the right equipment? What varieties of grapes do they grow, and are they right for our climate and the location of the vineyard?” She also notes that hiring the right people is important, especially for a new owner without a background in grapes. For example, hiring a vineyard manager from the East Coast is much more beneficial than bringing in someone from California, who will be unfamiliar with East Coast pest and climate challenges.

Joyce, who is also an adjunct faculty member in the enology and viticulture program at Harrisburg Area Community College, says an in-depth economic analysis is necessary, too. Buying a winery is a big investment – Twin Brook hit the market at nearly $3 million dollars – and one of the mistakes she has seen is a successful businessperson in another field buy a winery figuring he or she can be equally “fruitful” in the wine business. “A business plan is imperative, but you have to be in it for more than the money,” she stresses. “(Owning a winery) is not easy. It’s not easy at all.”

Tim Jobe, Twin Brook’s current general manager and winemaker, explained that owner Richard Caplan’s decision to sell is based largely on the fact that the 23 acres of vines on the property are getting old and need to be replanted. Tim says vines in this part of the country last between 30 and 35 years, and Twin Brook’s vines were planted in 1985. (Caplan purchased the 60-acre property in 1983; it had previously produced corn and soybeans and was also a dairy farm.)

Tim’s hope is that the property can continue as a winery. “The vineyards are capable of producing really good grapes, and we have made some really good wines,” he says. “The vineyard could go forever with someone who wants to replant and get it all done.”

Over the years, Twin Brook, which grows both vinifera and hybrid grapes, has produced many award-winning vintages, and Tim points out that the gorgeous property should be a selling point. “One of the successes is how beautiful it is,” he says. “People love coming here, even if they are just sitting outside drinking a bottle of wine.”

The 67 acres of land feature the vineyard, winery and tasting room, a farmhouse built in the 1750s (where the Jobe family currently lives), a gazebo, an organic garden and two greenhouses, one of which has been used as an event space.

Listing agent Anne Lusk, of Sotheby’s International Realty, says that although this is the first winery she’s listed, the Sotheby’s brand has a Napa-based office that only sells vineyards, and they have helped guide her through the process. Anne, who is a wine enthusiast, says she hopes to find an experienced buyer  who can use the property to produce fine wines well into the future. “We’d like nothing more than to have a new steward of the property and a new steward of the legacy,” she remarks.

Anne says she’s had some serious potential buyers inquiring about the property. “I literally have gotten inquiries globally,” she says with excitement, mentioning calls from Croatia, the United Kingdom and  Canada, as well as from all over the United States. The ultimate buyer, she theorizes, is someone who is “extremely well-funded. When you’re buying a commercial entity, you need to have plenty of reserves, and banks want to see that you have quite a bit of money down and that you’re an established business entity,” she says, adding that she asks for a pre-approval letter before showing the property. (She also allows a professional courtesy to those already operating within the industry.)

All of this means that, unfortunately, I will not own a winery any time soon. But I can still dream of “Aurand Point Vineyard & Winery,” right?

June 6, 2-9 p.m. Wine & Jazz Festival. Longwood Gardens. Nearly 20 regional wineries will be on hand. Musicians will be performing throughout the gardens. Longwoodgardens.org.

Fridays through September, 6-8:30 p.m. Wine by the Vine on Deck. Vineyard at Grandview, Mount Joy. Kick off the weekend with wine and music. Thevineyardatgrandview.com. 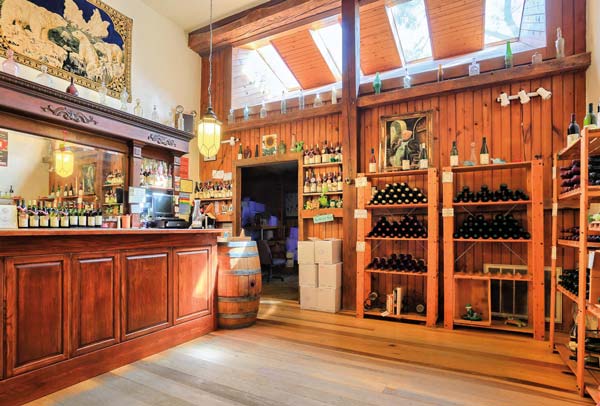