After 250 years as a private estate, an extensive project entailing meticulous restoration and renovation has transformed Elizabeth Furnace into a one-of-a-kind venue for weddings and other events. The historic property has never looked better! 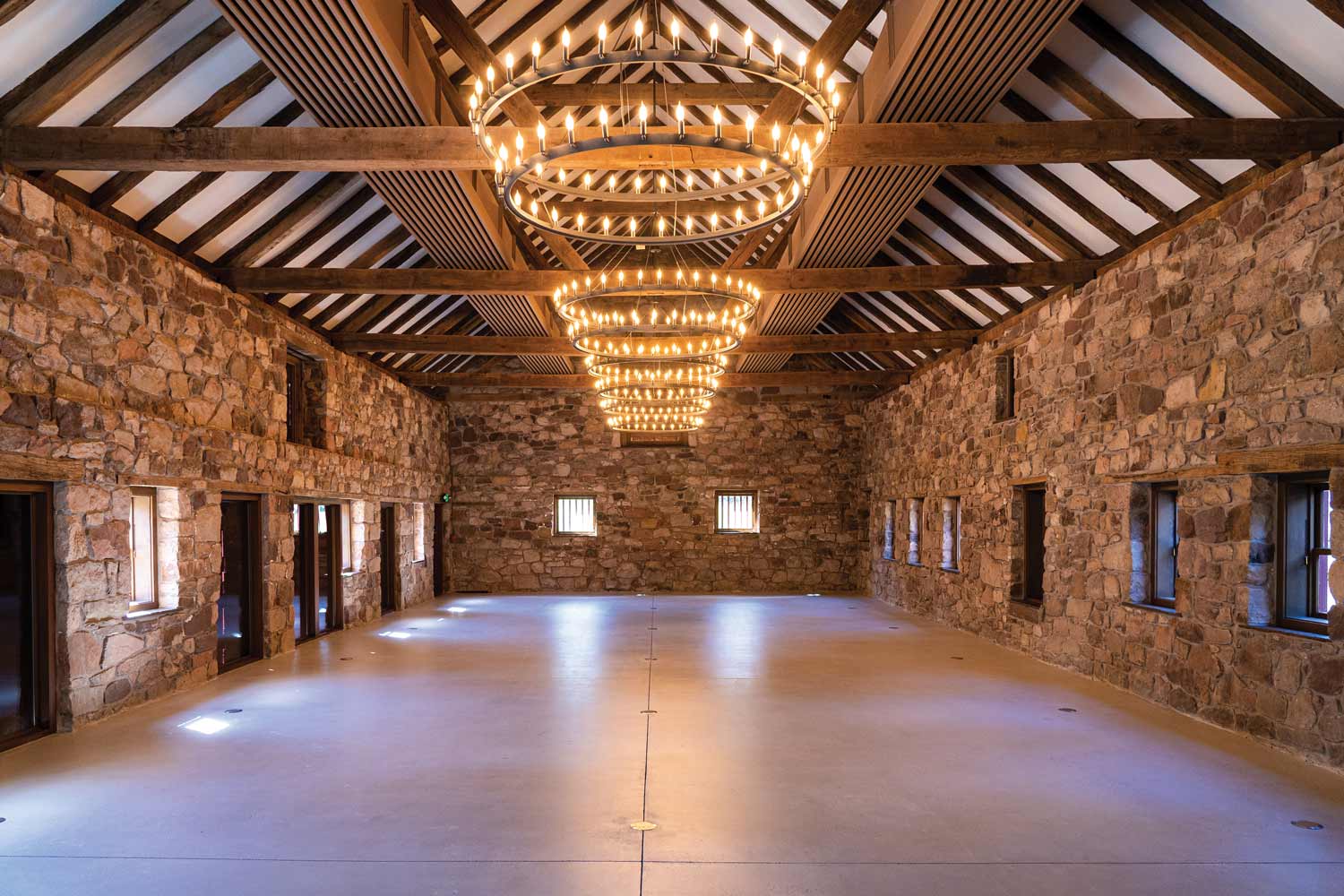 The Stiegel Stable’s roof was raised and its trusses and rafters were preserved to create a dramatic open space for receptions and events within its original stone walls, dating to the 1760s.

Standing among the impeccably restored buildings and the manicured grounds of Elizabeth Furnace, one can almost imagine its past: the sights, sounds and smells of a bellowing charcoal furnace, producing molten iron for casting of stoves, pots and other utilitarian products; teams of horses drawing wagons of charcoal and ore to power the furnace; scores of men laboring over the iron ore’s production; and families working in the communal gardens and kitchens at a time when Pennsylvania was a British colony.

Today, on the 34-acre property located north of Brickerville, little evidence remains of the hard lives those colonists endured in the latter half of the 1700s. The restored stone-and-wood Stiegel Stable now gleams with a new slate roof, while the newly constructed contemporary Pavilion that is adjacent to the stable offers 21st-century amenities. The preserved Charcoal Barn, with its rustic stone walls and floor, is illuminated with elegant iron chandeliers. One of the former stone tenant houses has been restored and is nattily furnished in leather couches. After four years of intensive work, Elizabeth Furnace has been transformed into one of Lancaster County’s most intriguingly beautiful event venues. 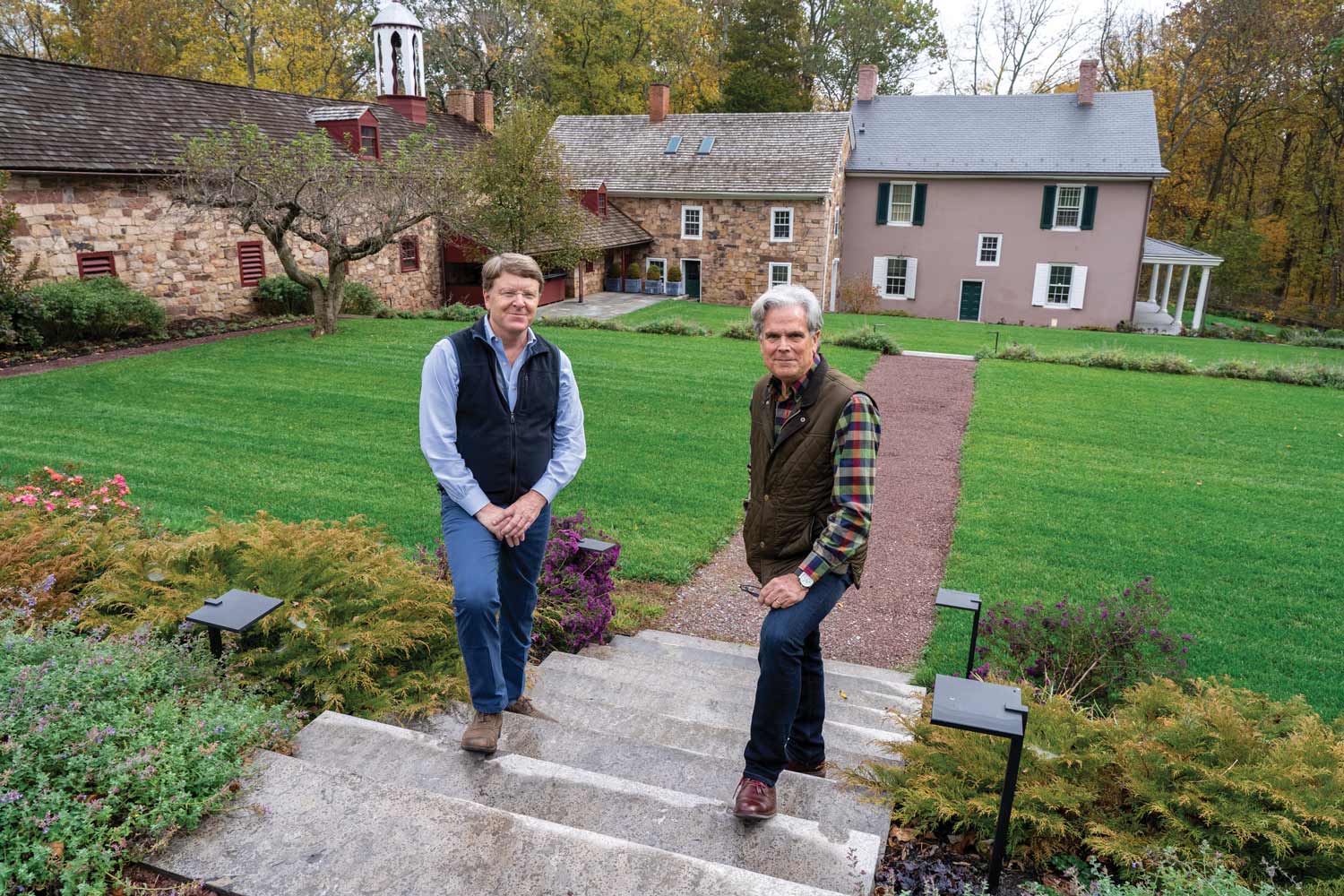 Seventh-generation owner, Craig Coleman (left), and head of design, Jim Bubb, who has spearheaded the project for the last four years and was painstakingly meticulous with regards to the blend of historic preservation, inspired design and attention to detail.

At the heart of the transformation are two seventh-generation members of the Coleman family – brothers Craig and Bruce. Craig fondly recalls robust Thanksgivings at the family homestead, the Stiegel-Coleman House, which dates to 1757-1788 and is registered as a United States Park Service National Historic Landmark. “The family relatives would converge for the traditional feast and to go pheasant hunting on the property’s surrounding acreage,” recalls Craig, who is now a Maine resident. “It was a wonderful tradition.”

Craig and Bruce bought out their cousin Bill Coleman’s interest in the mansion and estate in 2013. (Bill Coleman owns nearby Elizabeth Farms.) Their vision was to restore the property to be a self-sustaining investment as an event venue. “From an early age, our parents instilled in us that we were stewards, rather than owners, of this special property. We didn’t want to see this legacy end with our generation,” Craig says of the National Historic Landmark, which is one of only five in Lancaster County and one of 2,500 in the nation to be awarded that status. 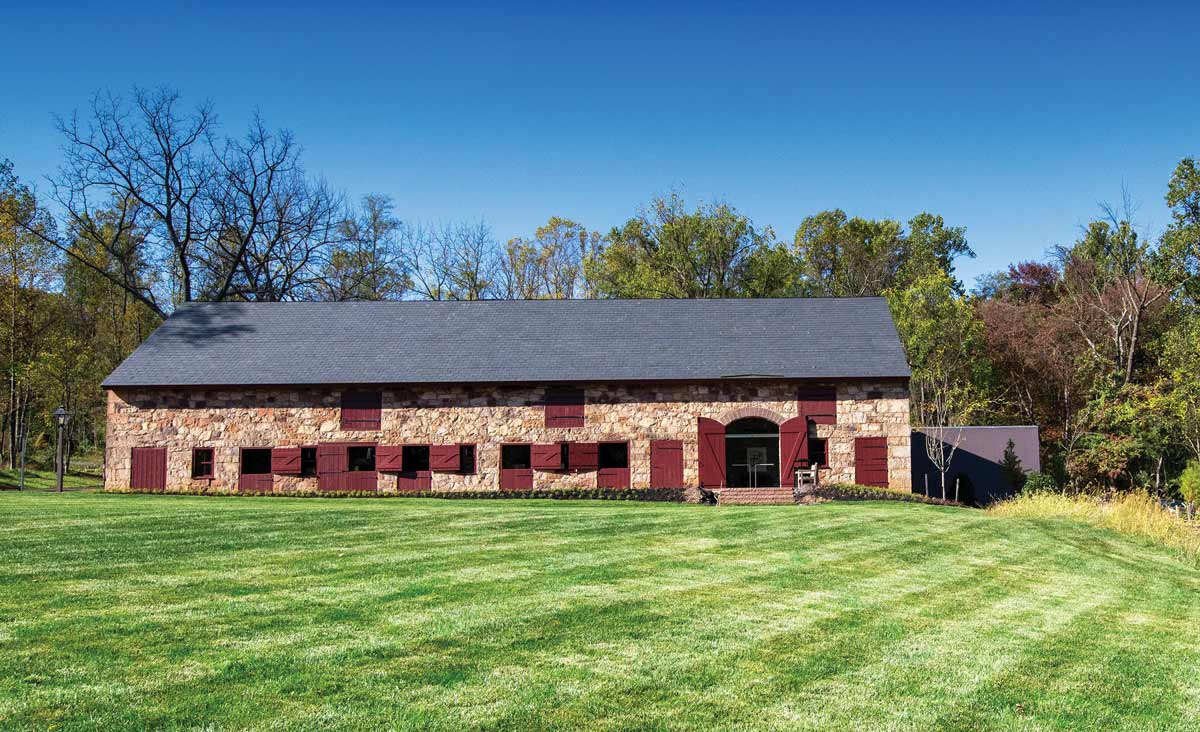 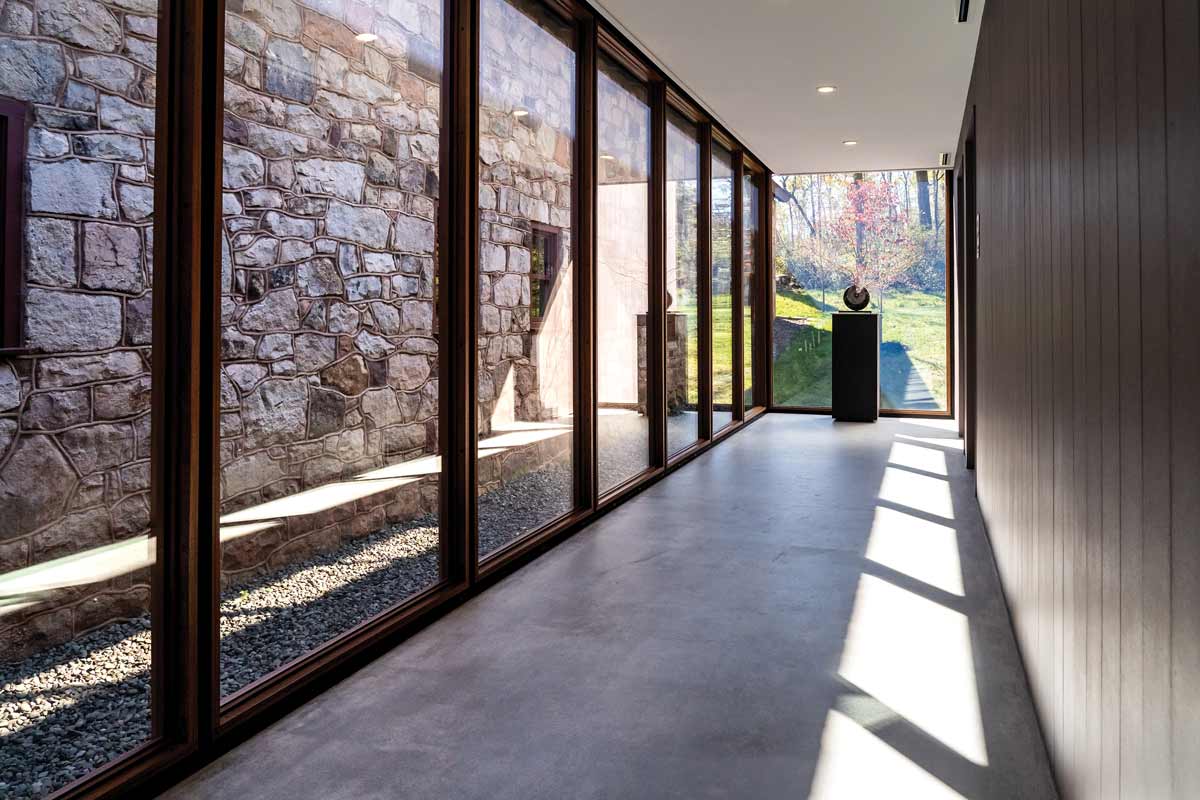 Connected to the Stiegel Stable, a newly designed Pavilion holds a Bridal Suite, restrooms and a catering space.

“This place is authentic with a huge capital A,” Craig says as he walks the grounds. “In fact, the ‘newest’ of the 12 buildings still standing on the property is the Coleman House, which dates to 1788.

“Authenticity, however, does not come easily or inexpensively. It takes a village,” he says, explaining he carefully chose his team from among Lancaster County’s foremost talent. Jim Bubb, owner of Virginia-D.C.- and Lancaster-based BubbDesign, was tapped as head of design and project manager. He was tasked with meeting the stringent requirements of historic preservation, while gracefully adapting the site to an event venue’s contemporary needs. 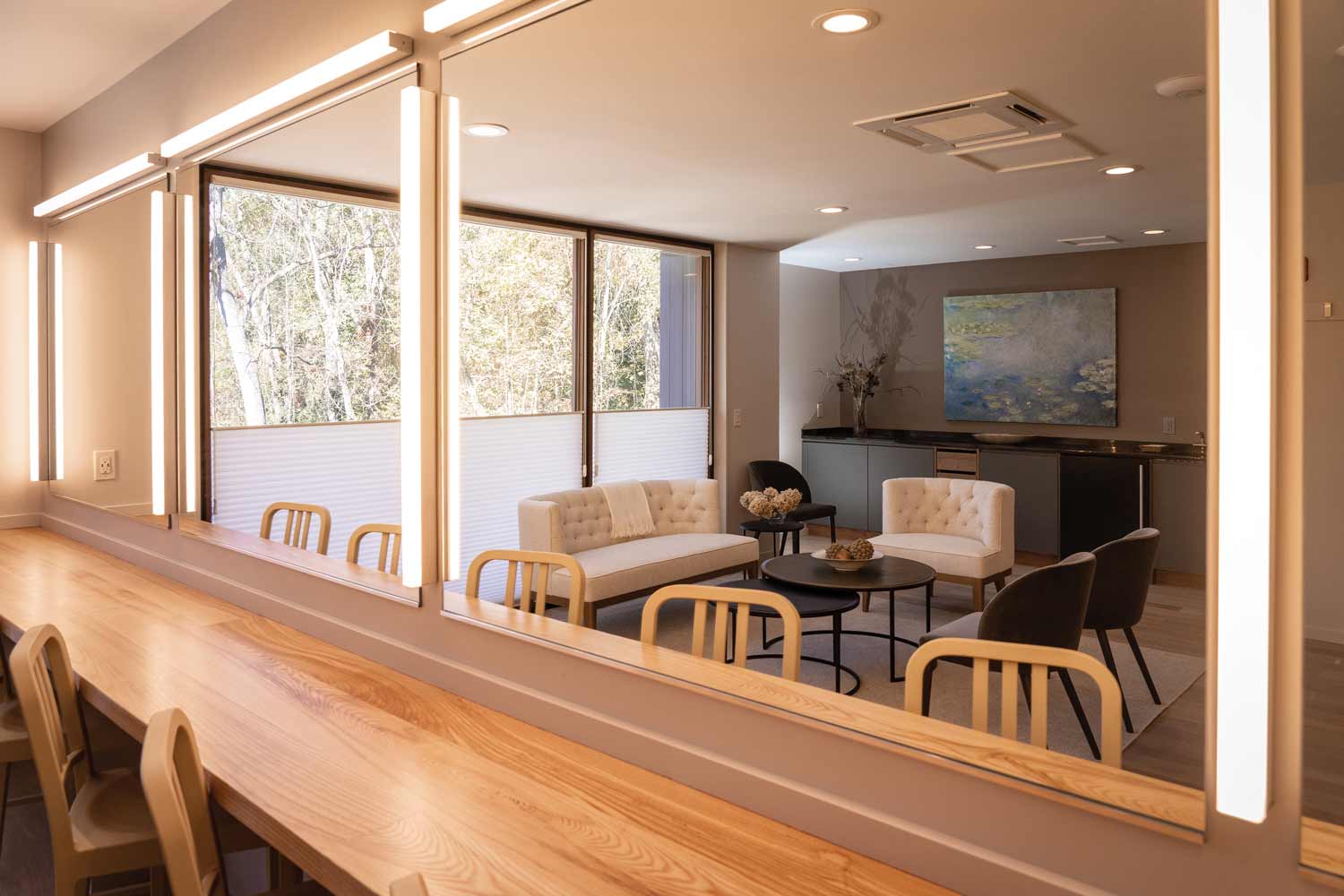 The Bridal Suite in the new Pavilion, which is adjacent to the Stiegel Stable, provides luxurious space for the bride and her maids to prepare.

As for the general contractor, Manheim’s Stable Hollow Construction was a natural fit, allowing its Amish craftsmen to apply their barn construction knowledge and traditional methods. Authenticity, indeed. 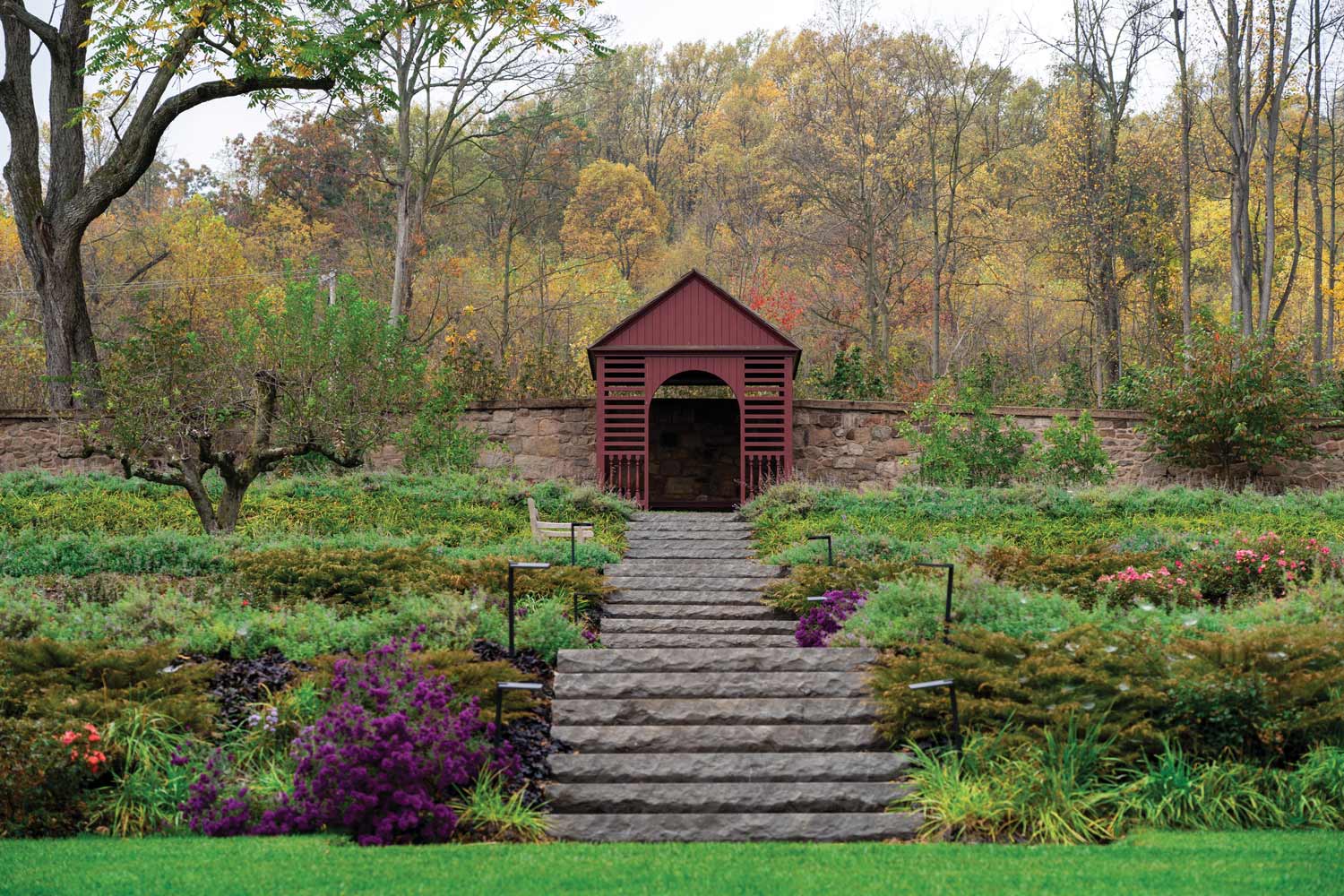 Tiered formal gardens offer beautiful surroundings for guests and a grand entrance for the bridal party as they assemble for vows at the Garden Folly.

Describing his four years at the helm of the project as a “once-in-a-lifetime opportunity,” Jim is familiar with every inch of the property’s restored structures. “At 2 o’clock, the play of light and shadow in this hallway is extraordinary,” he promises, attesting to the perception of detail his work demands. Every hinge, lighting fixture, handrail and door pull, for example, was selected with his reverence for historic preservation, while understanding contemporary aesthetics and practicality. He explains, “Sensitivity, respect and knowledge of construction techniques make a perfect marriage of the past and present.”

Marriages of the human kind are intended to be in Elizabeth Furnace’s future. For receptions, the Stiegel Stable boasts air conditioning, a heated floor, a soaring ceiling open to the original and restored trusses and rafters, dazzling tiered chandeliers and shuttered stable doors that allow couples to “create all sorts of different moods by playing with the light,” says Jim. 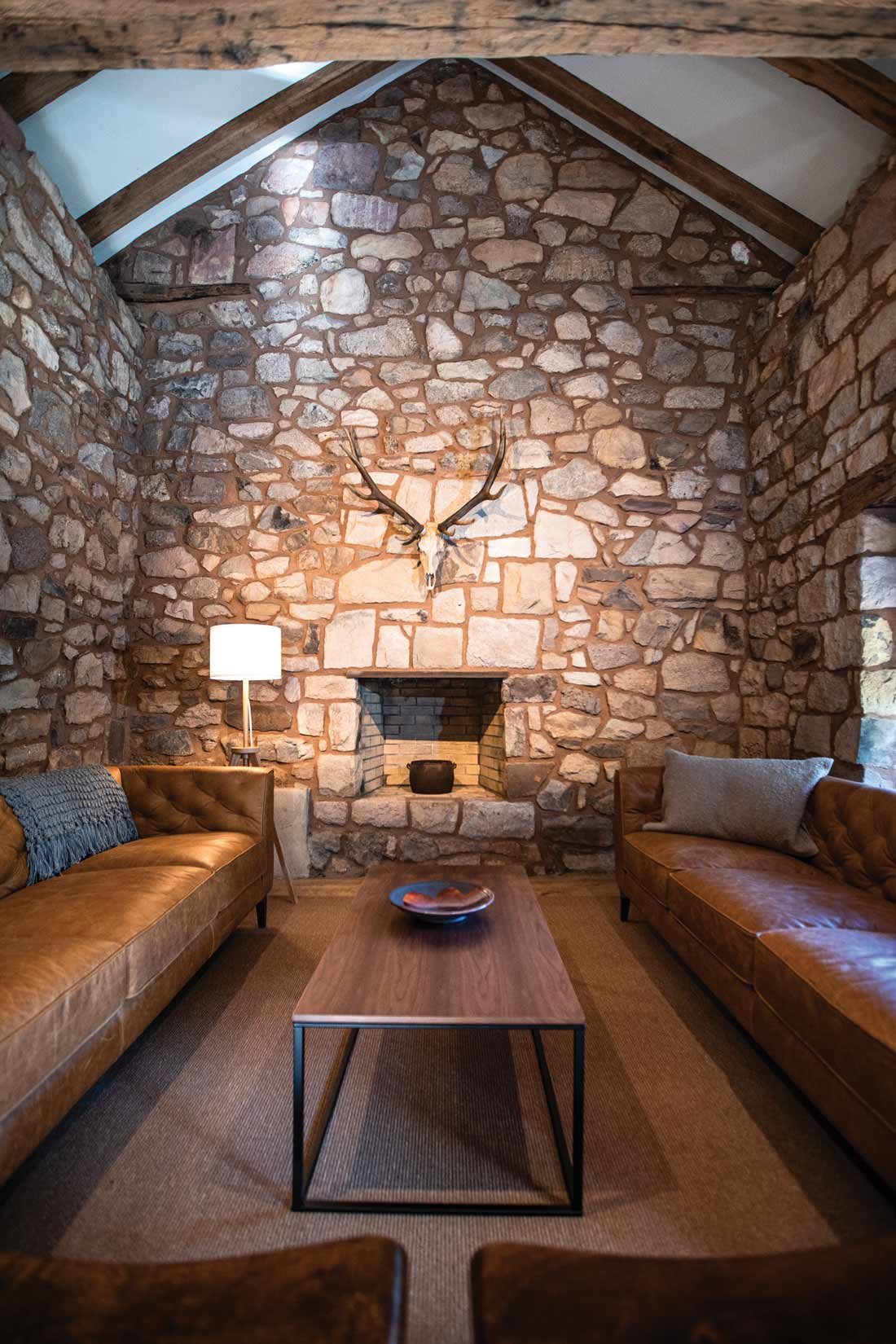 The Gentlemen’s Quarters is a rustic, masculine space with dry bar, fireplace and leather couches for the groom and his gang to chill.

Adjoining the stable is the newly constructed Pavilion that provides dressing/makeup rooms for brides and her attendants, restrooms for guests and catering facilities. The two entities seamlessly transition from the centuries-old to minimalist modernism. The groomsmen have their own remote manly digs for pre-wedding primping and toasting the man of the hour.

A few steps away from the stable and through the Ice House are the tiered formal gardens, where guests may be entertained as the bride and groom make their way to the garden’s architectural feature – the Garden Folly – for their ceremonial vows. The original Charcoal Barn has also been restored for more intimate gatherings, with the option to open the sliding barn door for an indoor-outdoor event.

Twenty-five years before the American Revolution, John Jacob Huber had been granted a 400-acre tract of land on the northern edge of what is now Brickerville. He built a blast furnace on the property and began casting five-plate stoves. One of his employees was Heinrich Wilhelm Stiegel (later to be known as Baron von Stiegel). The ambitious Stiegel, who had married Huber’s daughter, Elizabeth, bought out his father-in-law and with the financial backing of investors from Philadelphia, began construction on a series of buildings that comprise the estate. He also rebuilt the furnace and named it in honor of his wife, who tragically died 10 days after giving birth to their second daughter in 1758. Within a year, he was married to Elizabeth Holtz, who hailed from Philadelphia. 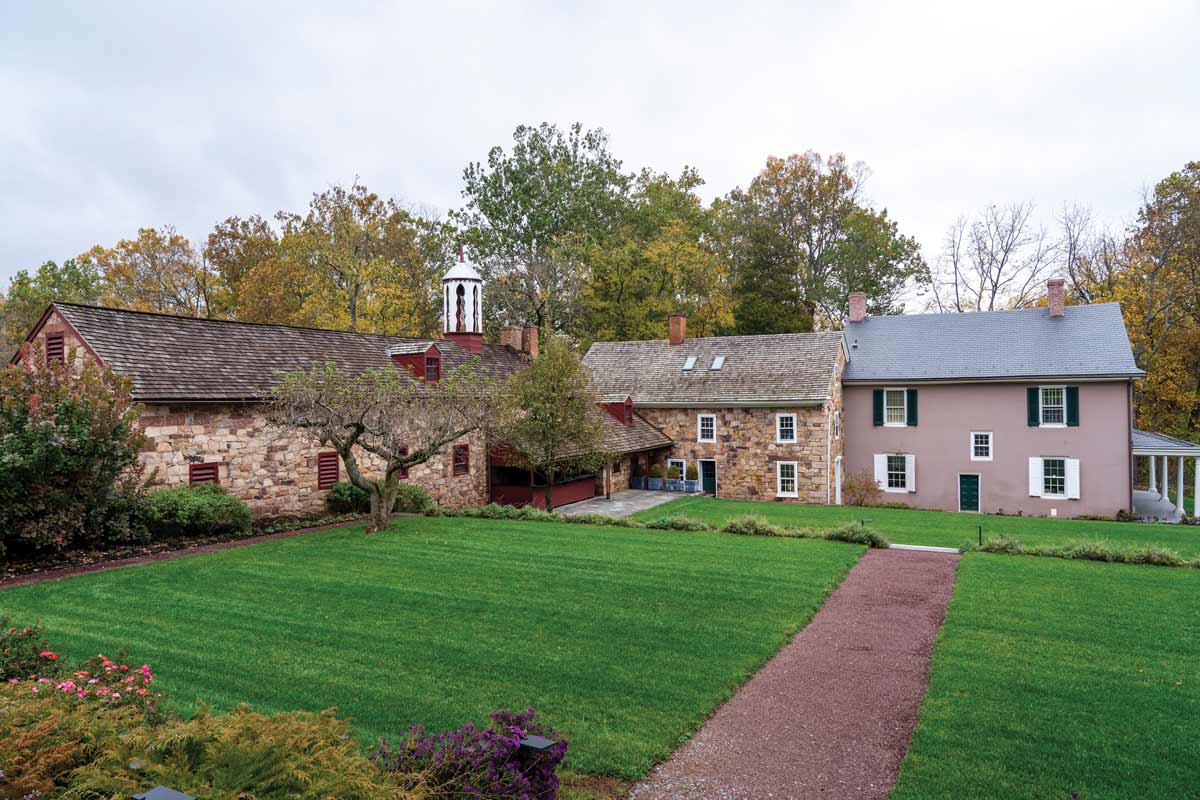 The Elizabeth Furnace complex dates to the mid-1700s; the Stiegel-Coleman Homestead is a United States Park Service National Historic Landmark.

Stiegel also purchased other forges in the region, helped to establish and plan the town of Manheim and became a renowned glassmaker.

Alas, Stiegel’s empire came crashing down and he was committed to debtor’s prison in 1770. He never recovered his fortune or business acumen and relied on the kindness of family and friends until his death in 1785.

With the demise of Elizabeth Furnace, Robert Coleman, who was originally from County Donegal in Ireland,  offered to lease the operation. Under his direction, the furnace was once again profitable, enabling Coleman to buy it outright. He, too, added other furnaces in the region to his holdings, becoming Pennsylvania’s first millionaire. 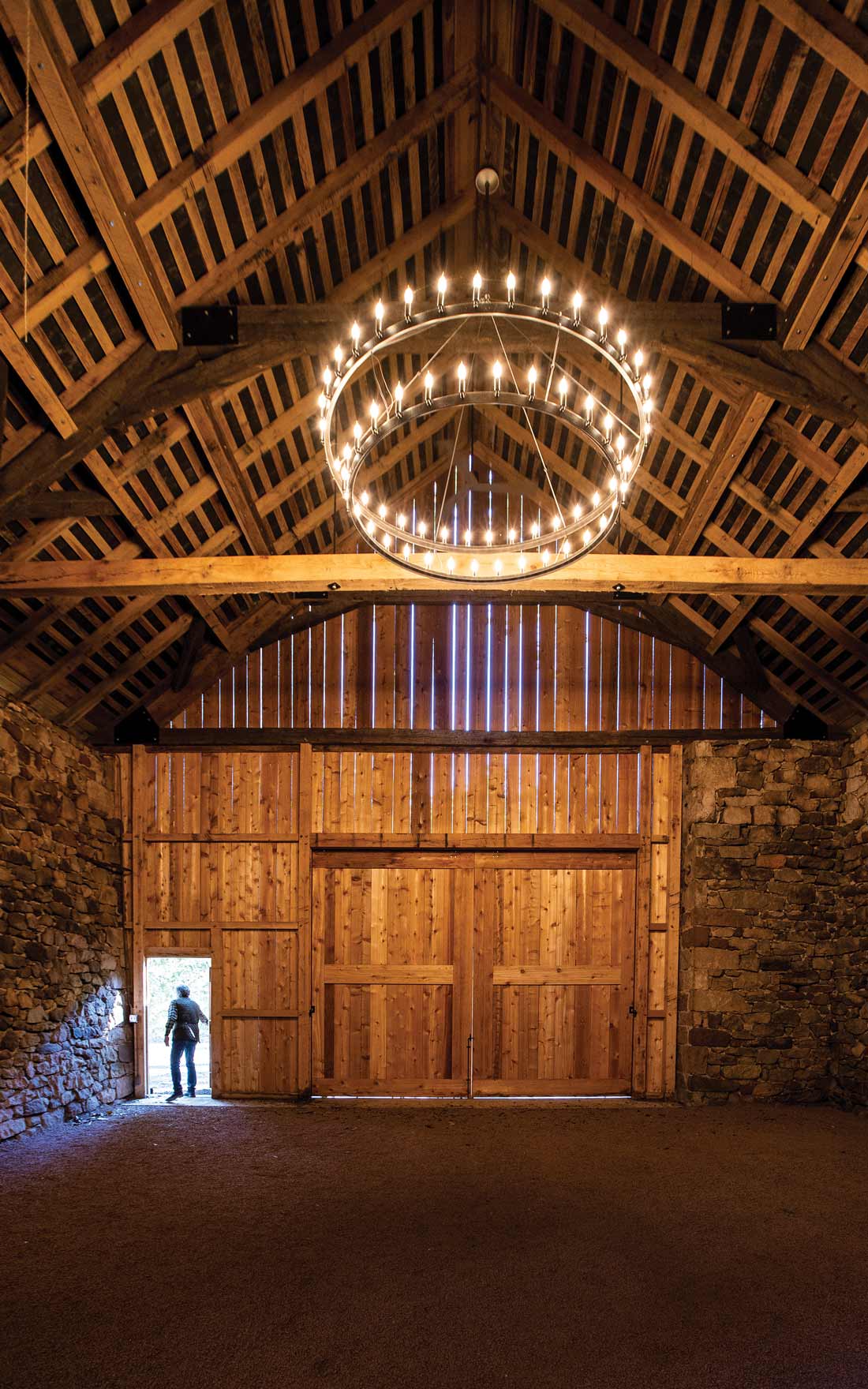 The original Charcoal Barn has been transformed into a rustic-elegant venue, with crushed-stone floor, cleaned stone walls and new timber walls that admit rays of sunlight.

Coleman also made his mark in the industry by supplying munitions to the Colonial Army. When he found himself on the short end of a contract, General George Washington sought to rectify the situation by sending 75 Hessian POWs captured at the Battle of Trenton to Elizabeth Furnace, providing Coleman with needed manpower. The Hessians also dug what is called the Hessian Ditch – a canal that carried water from the Furnace Hills to the iron furnaces. 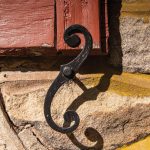 A shutter dog, used to hold shutters in place in the 1700 and 1800s, and the uniquely detailed stonework’s raised rib mortar.

Interestingly, it was Robert Coleman who made it possible for Stiegel to be released from prison. Coleman, who didn’t speak German, recruited the German-speaking Stiegel to communicate with and manage the Hessian POWs.

Of course, you can’t mention Robert Coleman without noting that his daughter, Ann, was the ill-fated fiancée of James Buchanan. Legend holds that Ann became disenchanted with Buchanan paying more attention to his law practice than to her and, after hearing rumors of him visiting another woman upon his return to Lancaster from a business trip (it was all a misunderstanding), she broke the engagement and set off to visit her sister in Philadelphia, where she suddenly and mysteriously died.

According to Craig, Robert Coleman was opposed to Ann’s pending marriage to Buchanan and ultimately barred him from attending her funeral. Buchanan vowed to never marry, as his sentiments went with Ann to her grave. To this day, Buchanan remains the only bachelor president in U.S. history.

In the centuries since Robert Coleman became the iron master of Elizabeth Furnace, seven generations of Colemans have called the property home. Craig and Bruce are excited to share this historic and beautiful property and see it become a one-of-a-kind setting for celebrating life’s special events. 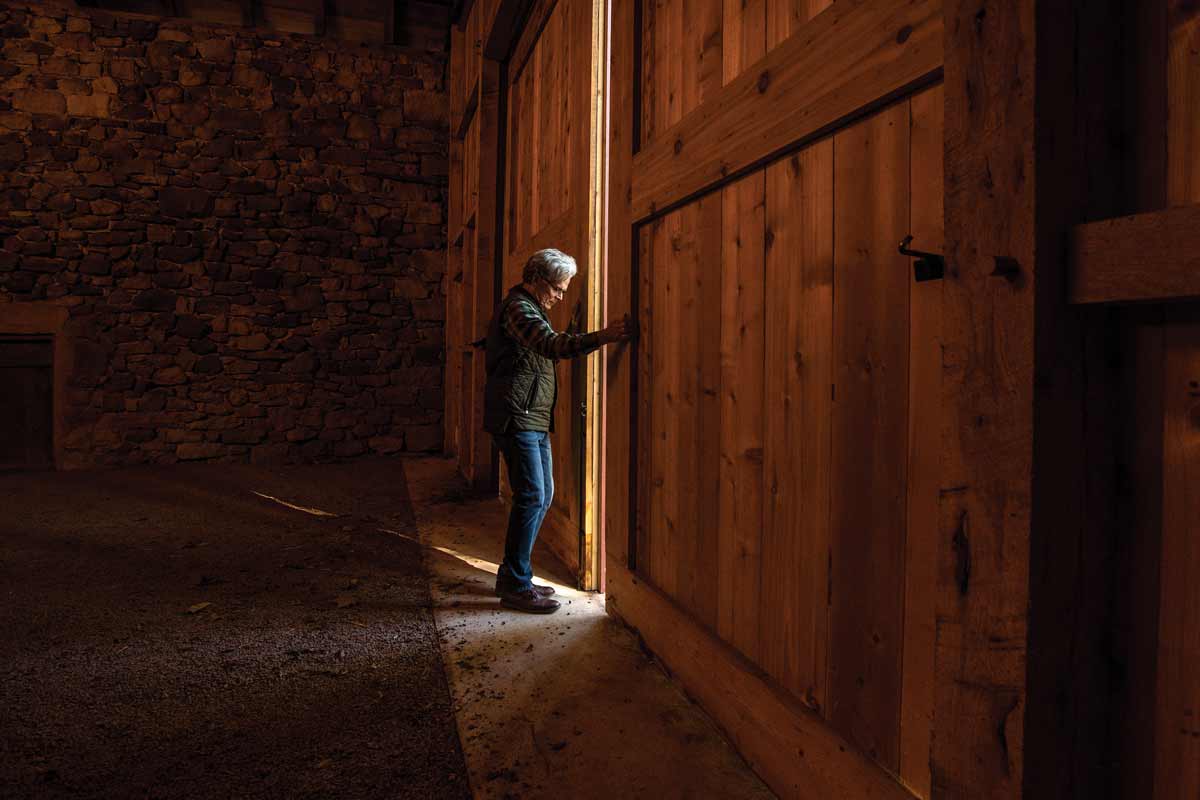 The Stiegel Stable’s roof was raised and its trusses and rafters were preserved to create a dramatic open space for receptions and events within its original stone walls, dating to the 1760s.