A year ago, Manor Township’s riverside low-grade rail trail made its much-anticipated debut. According to the township’s manager, Barry Smith, the trail’s reception has surpassed expectations. “The range of users is stunning,” he marvels. 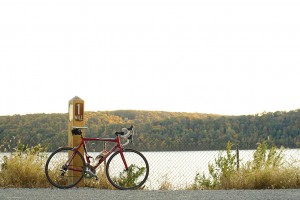 Barry, who deems the project the “most exciting thing I’ve ever been a part of,” is a frequent visitor to the trail in both a biking and dog-walking capacity. “I talk to random people to get their reactions,” he explains. As a result, he’s talked to “people from all over the country and we’re getting rave reviews. A couple I met from Boston have walked similar trails all over the country and decided to check out ours when they were here for a wedding. They put it in the Top 5!”

Obviously, word is getting out about this riverside gem. Last September and October, the trail, which is accessible from River Road at Turkey Hill and travels along the Susquehanna for more then five miles, attracted an average of 2,800 visitors each weekend. Thanks to the pleasant summer weather we enjoyed, Barry is confident those numbers are holding, if not growing. “I’m always amazed to see who’s using the trail,” he says. “Some days I go by and the parking lot, which holds 70 vehicles, is filled beyond capacity. Early mornings are very peaceful and you’ll find people running, biking or walking their dogs. During the week, you’ll see everyone from preschool groups to seniors from local retirement communities exploring the trail. On weekends, young families are very evident. People use the trail to train for races: The women’s cross-country team from Millersville trains on the trail. I’ve seen people in wheelchairs on the trail.” 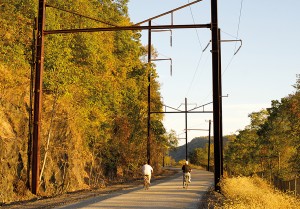 The Enola Low Grade Rail Trail is situated beside and above the Norfolk Southern tracks that continue to handle rail traffic. The clay/crushed-stone surface is very user-friendly.

Indeed, there’s something for everyone. Scenery is, of course, the star attraction and at this time of the year, it’s gorgeous. The trail follows the meandering Susquehanna, which is over a mile wide at Turkey Hill. Bordering the trail are the massive, tree-covered stone cliffs that constitute Turkey Hill. At times, an eerie sound is emitted – no, it’s not a bigfoot-like creature, it’s the modern-day windmills that help to generate electricity for the hill’s namesake Turkey Hill Dairy. In addition, three unique aqueducts carry water that spills from the top of the hill and makes its way under the trail and into the river. “Our goal was to retain as much of the character of the area as possible,” Barry notes.

On occasion, trains negotiating the adjacent tracks whiz by. According to Barry, train lovers will appreciate the perspective the trail provides. “The trail is above the tracks, so it’s neat to be able to look down on trains as they pass by,” he reports.

Wildlife is another draw: Trail users can watch as fishermen work their favorite spots in the river or look up and catch eagles soaring high above the trees. “People flock here with cameras,” he adds.

History buffs will also appreciate the opportunity the trail provides to learn while getting in some exercise. “We devoted a lot of research into the history of the area,” Barry points out. The trail follows the route of the Atglen & Susquehanna Branch of the Pennsylvania Railroad. Once considered a feat of engineering, the line was built between 1903 and 1905. Operations ceased in the late ‘80s. In 2006, the line’s present owner, Norfolk Southern Railway, expressed a desire to divest itself of the property and opened discussions with Manor Township regarding the purchase of the line’s 207 acres. The sale was finalized in 2012. 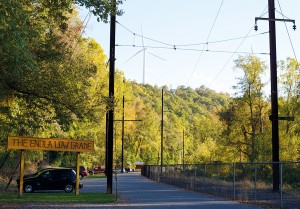 State grants and a $1.25 million contribution from Norfolk Southern enabled the township to develop the trail, which will eventually join with a nearly 24-mile route that will traverse other jurisdictions in the Southern End, culminating in the Christiana area. The funds have helped the township “pave” the trail with a unique surface that is composed of clay and finely crushed rock. Barry says the mix, made by York Building Products, “has held up as advertised. The beauty of the surface is that it’s user-friendly for walkers and bike riders alike,” he adds, pointing out that it’s not only kind to human joints, but also to the tires of road and mountain bikes, as well as wheelchairs.

The budget also allowed for the construction of viewing platforms and the inclusion of picnic tables. Norfolk Southern did stipulate that a fence needed to be in place to separate the trail from its track. An unobtrusive, black chain-link fence was used to meet that requirement.

The history of the area as it pertains to railroading is portrayed through displays that share facts and vintage photos. The project also allowed the township’s Public Works crews to exercise their creativity. Finding many of the line’s concrete mile markers in disrepair, crew members salvaged and restored them. Two watch houses were also renovated, as was a Pennsylvania Railroad caboose that dates to 1947. According to Barry, touching on history in a recreational area is “more of an art than a science. You want to provide interest without clutter.” 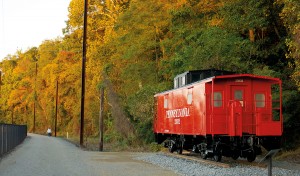 The area’s railroading history is reflected in a restored caboose – essentially an office on wheels – that was purchased from a collector in Marietta.

The acquisition of the caboose was inspired by a trip that Barry made to Florida for the Phillies’ spring training. “We checked out some rail trails down there and saw that a caboose was being used as a café along one of them. I thought a caboose would be a great addition to our trail.” Coworkers began searching for a caboose and found one in Marietta. Its owner had purchased 20 cabooses and had three left. He oversaw its transport and delivery. From there, Public Works personnel executed its makeover. An outside company installed the section of track on which it now stands. “It’s now a favorite backdrop for pictures,” says Barry, referring to everything from selfies to commemorative group photos.

One thing that you won’t find is trash cans. “We expect visitors to carry out what they bring in,” Barry remarks. So far, the policy is nearly golden. “We check out the trail once or twice a week and rarely find much trash. I’d guess about 97% of people abide by the rule,” he says. 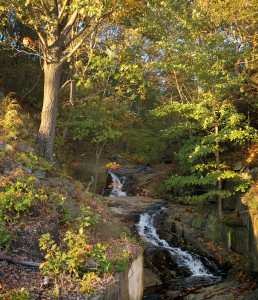 Mann’s Run is one of three waterways that spills down the cliffs that comprise Turkey Hill. Aqueducts guide the water under the trail and into the Susquehanna River.

Manor township officials are excited about what the future holds for the trail. On the drawing board is the restoration of the bridge that spans the Conestoga River near the Safe Harbor Dam. Architectural drawings portray it as resembling more of a boardwalk than a bridge. “It’s going to be spectacular,” Barry says. “We’re confident it’s going to happen and are hopeful for completing it in 2016.” Future development will warrant additional parking areas along the trail.

The township also hopes to delve into other historical aspects of the area. “We have a tremendous Native American history in that area,” Barry points out.

The township is also becoming aware of the economic impact the trail is having on small business. “Go to Columbia and you’ll notice cars with bike racks at places like restaurants and the Turkey Hill Experience. The same thing is happening with restaurants in Millersville. I also notice more cars with bike racks at the Central Manor Bakery & Grille. I understand there’s a spike in business at bike shops, too.”

So, you know what they say about dismissing things in your own backyard? Barry hopes that the Enola Low Grade Rail Trail will make you aware that “there’s so much to do right here.”

For information about the rail trail, which is open from sunrise to sunset, visit  their Facebook page. 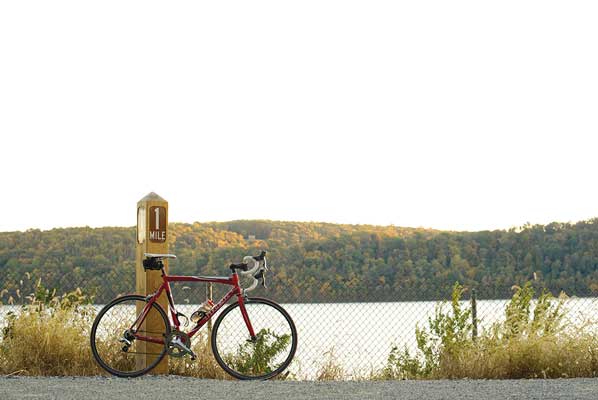