Rollin’ Into the Future of Bicycles
Search
September 26-30
The Midway is located in the downtown area of Ephrata and extends along Main Street and a section of State Street. Non-agricultural exhibits are located in several downtown buildings. Agricultural and commercial exhibits, shows, etc., are headquartered at Tent City in Grater Memorial Park. Shuttle service is available between the two locations. The Midway opens at 10 a.m. daily, however, the rides open at various times during the week. Judging generally gets underway at Tent City during the late morning.
Admission is free; there is a fee to park in downtown lots (proceeds benefit area scout troops).
Details: Ephratafair.org

Welcome to the largest street fair in Pennsylvania and the oldest fair in Lancaster County! The fair is already crowing over the fact that next year will mark its 100th anniversary.

It all began in 1919, when Ephrata wanted to welcome its soldiers home from the war front with a special celebration. Area businesses devised a one-day celebration along Main Street as a way to say thank you to the returning soldiers and generate funding for the community park.

The event proved to be so popular that a harvest theme was used to carry it forward in 1920. By 1922 the fair had grown to three days and was given an official name: Ephrata Farmers Day Fair. Ten years later, the fair was incorporated as the Ephrata Farmers Day Association. It grew to four days and gained a parade!

Over the course of the next two decades, the fair continued to grow to the point that agricultural and commercial shows and exhibits could no longer be accommodated in the downtown area. In 1956 they were moved to Grater Memorial Park, where they took up residence in what is called Tent City.
The move allowed the downtown area to expand into a street fair complete with rides, concessions and vendors. Community groups also set up food stands in the downtown area.

Grater Memorial Park is also teeming with activity. Beef and dairy cattle, swine, lambs, goats and more are judged throughout the week. Bakers compete for admission to the Pennsylvania Farm Show.

Ephrata also features a cheesecake competition. Tent City is also home to the popular food stand operated by the Ephrata Area Young Farmers Association, as well as others that are sponsored by various community groups. On Tuesday evening, Tent City will kick off festivities with a Bar-B-Q Pork Chop dinner.

On Wednesday evening, the entire town turns out for the Ephrata Parade. If you’re not familiar with the parade route, all you need to do is drive through Ephrata on Sunday afternoon and follow the chairs that have been placed along the curb in order to reserve prime viewing spots. Reserving those spots got so out of hand at one point that Ephrata was forced to decree that no chairs will be placed along the curb before noon on the Sunday before the parade. The parade also embodies community spirit in a unique way: An endeavor called Parade Night Food Collection supports the Ephrata Area Social Services Food Bank.

Besides taking in the Midway and the events at Tent City, there’s plenty to keep you entertained. The Baby Parade is held on Saturday of Fair Week; this year marks its 57th edition. There’s a tug-of-war contest, as well as tractor pulls and a talking turkey contest. Wednesday is reserved as Senior Cititzens Day, while Thursday is Kiddies Day. There’s also a Family Fun Night. There’s bingo, too.

Attendees will also be treated to a sneak peek of the festivities that are planned for 2018. They will be able to pre-order a commemorative anniversary book. A quarter-toss game that hearkens to the early days of the fair will serve as a fundraiser for the centennial celebration. And, this year’s parade will salute the upcoming anniversary by adding a 100th celebration category. “The Ephrata Fair has set Ephrata apart and has stood the test of time,” says Beth Quickel, who is chairing the 100th Anniversary Committee.

No doubt the celebration will pause to salute Lancaster County’s own Miss America (1954), Evelyn Ay, who began her quest for the crown by winning the Miss Lancaster County pageant, which was traditionally held in Ephrata on the Saturday night of Fair Week. She went on to become Miss Pennsylvania and to this day is the only state representative to become Miss America. 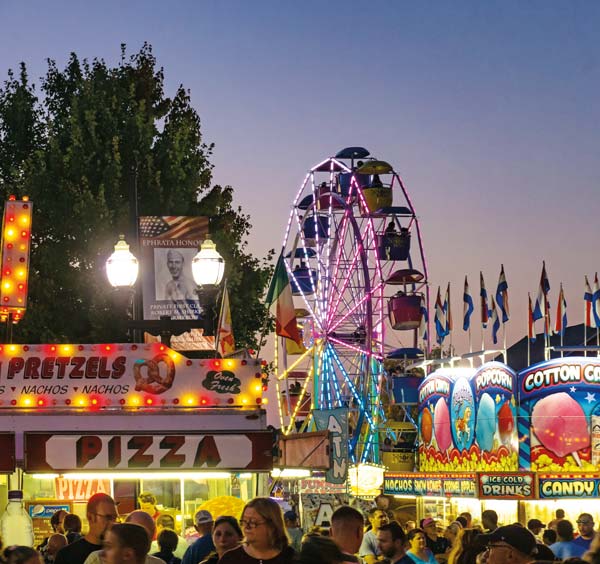