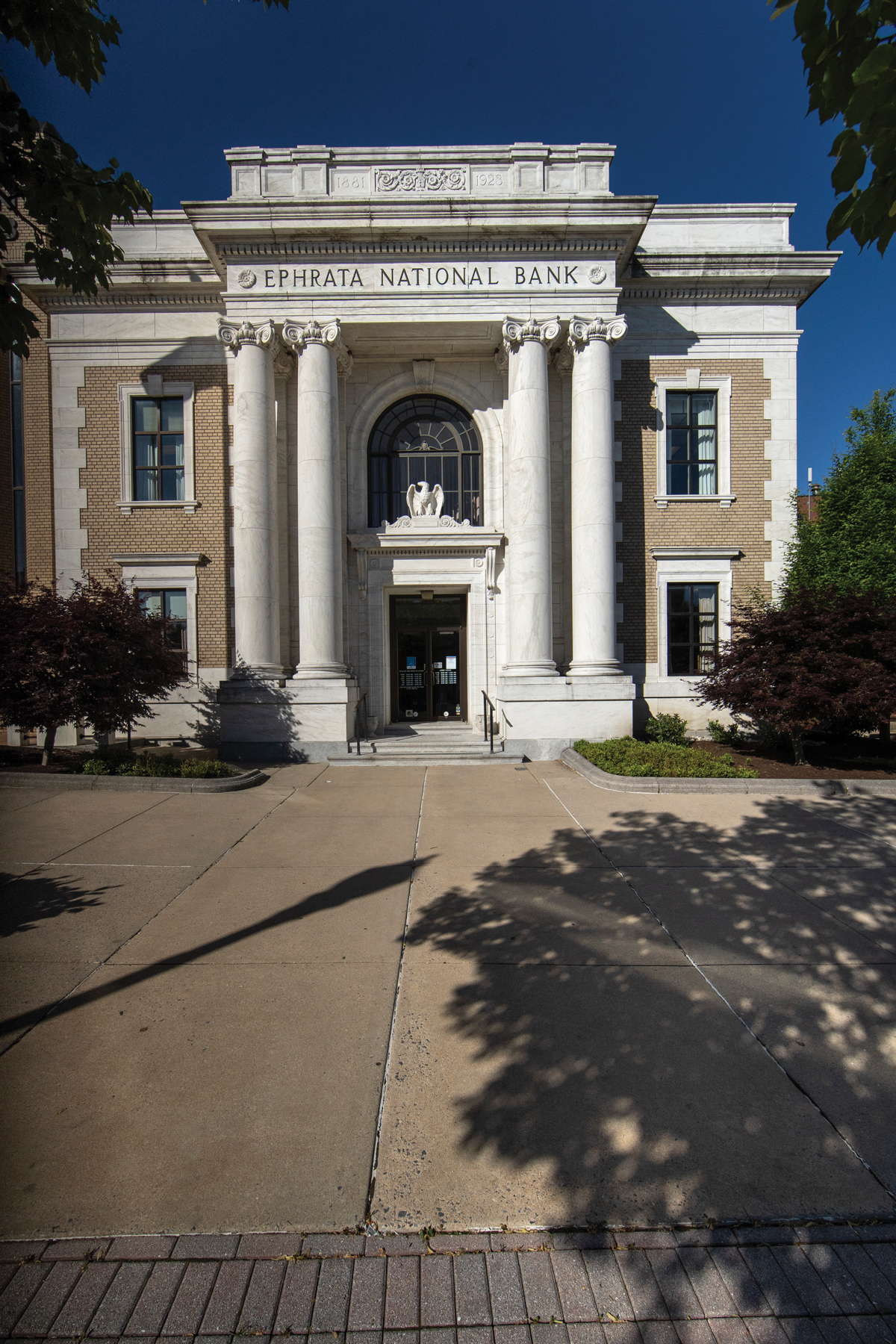 Designed by architect C. Emlen Urban, Ephrata National Bank reflects the symmetry of Beaux Arts styling. It opened to the public in 1925.

It says quite a lot when customers feel as if they are personally connected to their bank. In the case of Ephrata National Bank, it’s not unusual for customers to present the bank with memorabilia they possess or come across hidden away in an attic.

At one time, every small town in Lancaster County was home to a community bank. Ephrata was no different; in fact, its slogan was “Your Bank.” Unlike other small-town banks, Ephrata’s is the only original to survive.

Ephrata National Bank’s roots extend back to 1881. William Sener, a 19th-century entrepreneur, founded Lancaster’s first electric company, and his home on Charlotte Street was one of the first in the city to be wired for electric. He also owned coal and lumber yards in Ephrata, which prompted him to see the need for a bank. With the backing of 75 investors (each contributing $100), Sener founded Ephrata National Bank.

Nine years later, the bank hired a teller, 18-year-old J. Harry Hibshman, who would go on to become the bank’s fourth president, serving until his death in 1964. Hibshman was a frugal man, never owning a car and always walking to work from his home that was located a few blocks away from the bank. He also never accepted more than $10,000 a year as his salary. However, he was a savvy investor. At the time of his death, he had amassed a blue-chip portfolio that was valued at $1.5 million. 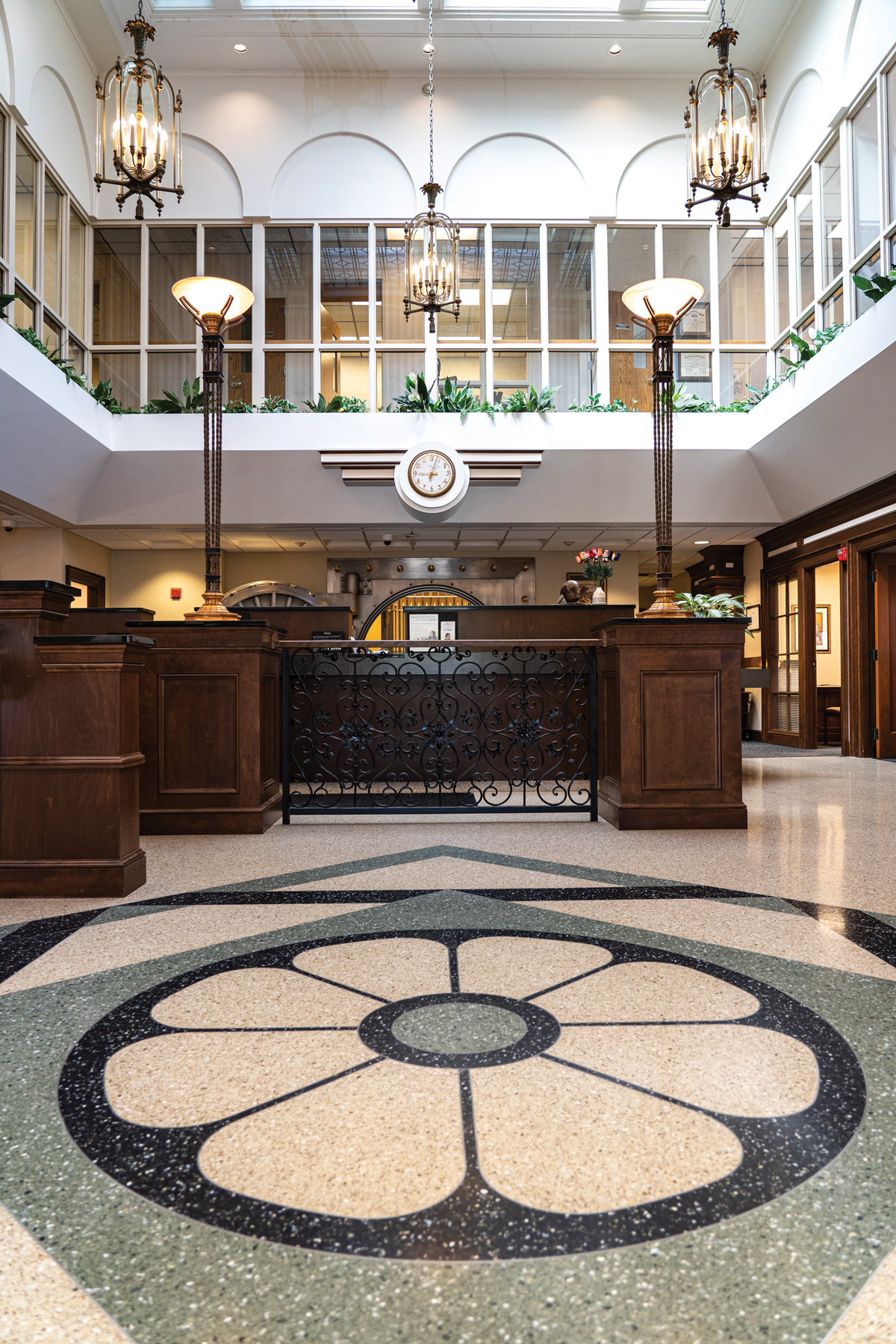 Jim Brown worked with the Manheim firm Roman Mosaics & Tile Company to design a terrazzo floor. The floral accents reflect the design elements that are found in the original stained glass that tops the ceiling and admits light through a skylight.

Hibshman’s frugal philosophy extended to the bank and according to the bank’s archives curator, Jim Brown, it successfully carried the bank through the Depression.

Always one to value education — Hibshman was a member of the school board for 47 years — and with no heirs, he established his legacy by creating a very special scholarship program for Ephrata High School seniors. In his will, he deemed that all of the yearly dividend payments from his stock holdings be paid out in scholarships. He also specified that prospective scholarship recipients must go through a rigorous interview process that entails meeting with the bank president, the mayor, the district superintendent, the high school principal and the school board president. 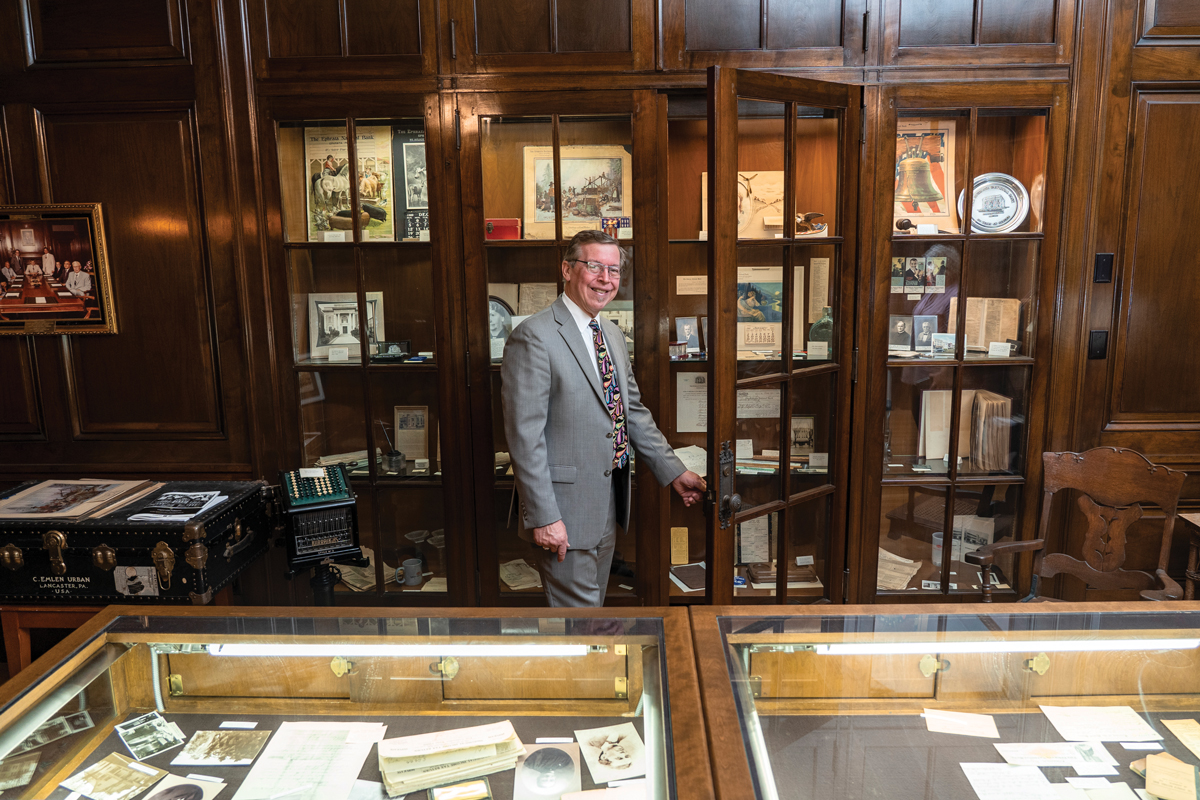 The original board room serves as the Archives Room. Curator Jim Brown spends 45 minutes with new employees in an effort to acquaint them with the bank’s history.

In 1965, eight 4-year scholarships ($500 for each year) were presented. Since then, the fund has grown substantially (and the amount awarded to each student has grown as well). By 2015, the 50th anniversary of the scholarship program, 3,968 students had received $23 million in scholarships courtesy of J. Harry Hibshman. In 2019, 80 students received scholarships.

In its first 40 years of existence, the bank made its home in several buildings along East Main Street. In the early 20s, that all changed when esteemed architect C. Emlen Urban was charged with designing a proper bank building. The Ephrata project would be Urban’s fourth and last bank assignment. The Beaux Arts design utilized materials such as Vermont marble, English bond brick and walnut hardwoods. Stained glass covered the ceiling, filtering the sunlight that entered via a skylight. Chandeliers hung from the ceiling. The vault was state of the art. The cost to construct the building was $240,000.

In 1925, it was truly something to behold. In fact, on opening day, 10,000 visitors passed through its imposing entrance to view the impressive vault around which the building was constructed. The vault’s frame and door together weigh 26 tons. Ten mules were needed to transport it from the train station to the building site. 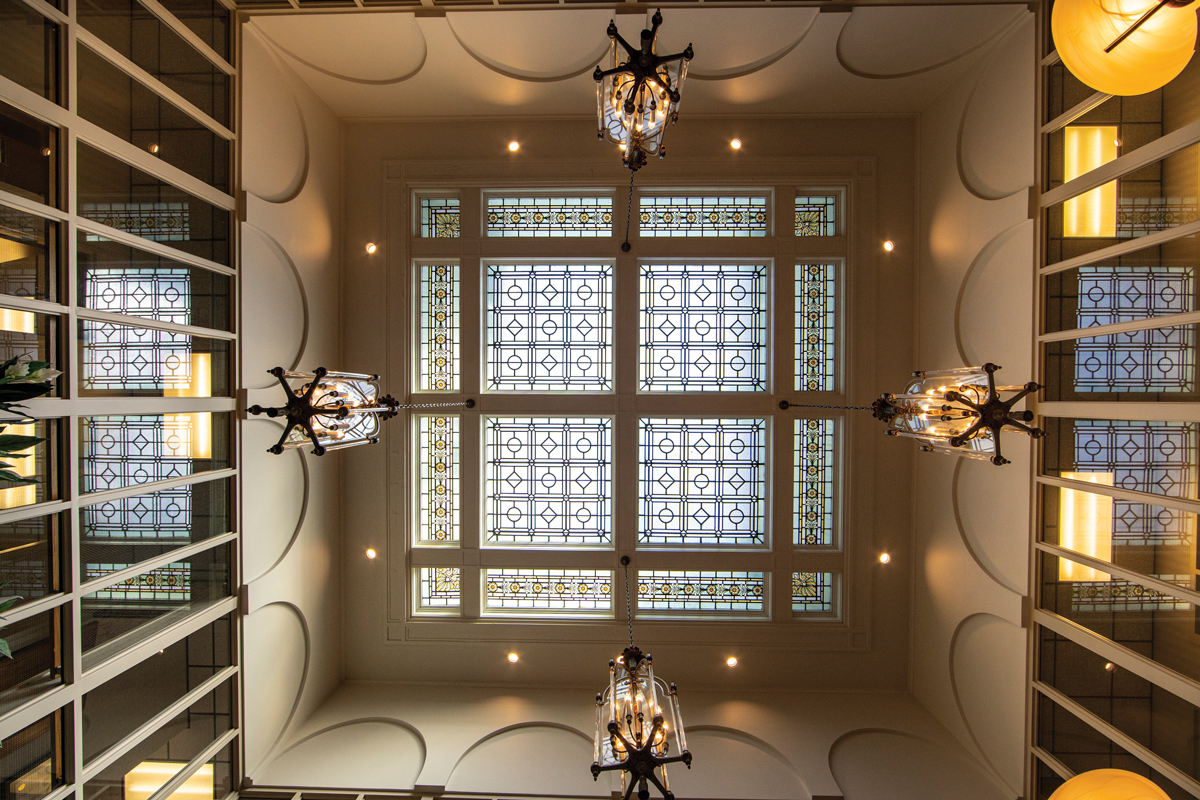 The stained glass skylight and chandeliers are original to the building.

To mark the occasion, children were given banks and women were presented with roses. “It truly is a privilege to work in this beautiful building,” says modern-day teller, Penny Fasnacht.

The growth of the bank prompted remodeling/expansion projects in 1960 and again in 1981. In 2011, another project sought to recapture Urban’s vision. Many of the original elements were in place, including the lighting fixtures and skylight. Jim, who also serves as the director of facilities for the bank’s 13 branch offices, brought back the Urban aura with terrazzo floors and gilded ceiling moldings. Items such as an original check-writing deck also resurfaced. “It’s really satisfying to bring history back to this building,” he says.

Speaking of history, the archives, which were launched by Paul Brubaker, are fascinating. “We’re always collecting,” Jim says of acquiring items such as bank notes that come up at auction to calendars and other memorabilia that customers provide. Former bank presidents and their families have been very generous in providing items from their tenures at the bank. A steam trunk that once belonged to Urban is on loan to the bank courtesy of Barb Palm. “You know, when small-town banks are acquired by larger banks, all that history gets lost,” Jim says. “Items may get thrown in boxes with all good intentions, but inevitably the boxes disappear.”

Another chapter in the bank’s history will be written later this year, when Aaron L. Groff, Jr., who began as a teller 52 years ago, will relinquish the presidency of Ephrata National Bank to Jeffrey S. Stauffer. 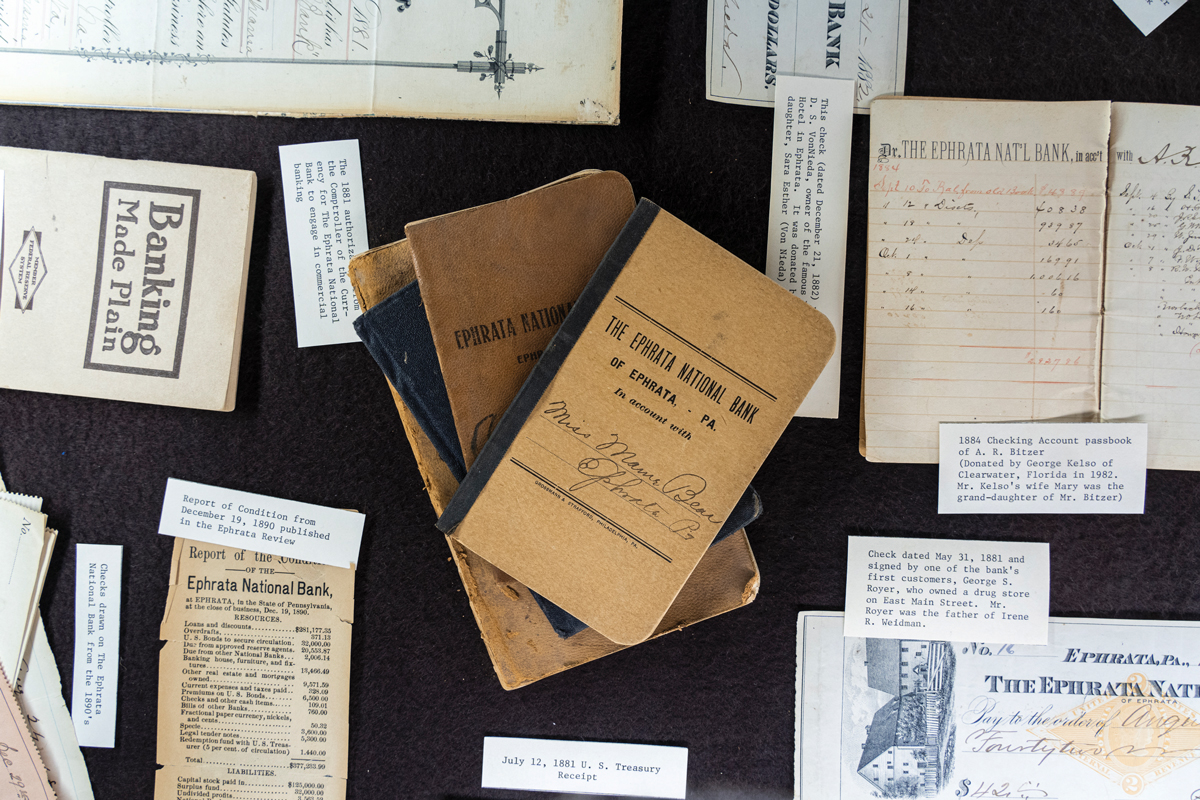 The Archives Room and a showcase in the public area of the bank are filled with memorabilia and artifacts that date back to the beginnings of Ephrata National Bank.

As you might guess, Ephrata National Bank, which now has branches and free-standing locations in Lancaster (as far south as Georgetown), Berks and Lebanon counties, has a customer base that includes a sizable portion of the Plain community. As a result, the bank’s brand of customer service extends to providing branches with horse ties and in some cases, sheds, all of which provide access to water. The sheds are equipped with electrical outlets that allow Plain customers to charge their iPhones. “Times are changing,” Jim says.

The answer to that observation would be yes and no. Sit in the reception area that provides access to the bank from the rear parking lot, and you’ll hear Sue Shenk greet everyone by name. It’s a tradition that has carried over from the days when the bank employed greeters at its branches. I ask Sue if she knows everyone who comes through the door. “Just about,” she replies. “A lot of customers are in here every day or at least every other day. If I don’t see them, I worry about them.”

The stained glass skylight and chandeliers are original to the building.