Many local manufacturers — both large and small — have opened up their doors and now allow visitors to take a unique look at what goes on behind the scenes; from farm equipment to snack foods, musical instruments to handcrafted furniture, factory tours provide a fun way to learn about what people are making in the Susquehanna Valley.

Pennsylvania is no stranger to world-famous manufacturing. Lancaster’s Armstrong World Industries has been supplying homes with flooring since 1891. Crayola has provided kids with colors since 1885. Pittsburgh is a city whose entire identity is based around the steel industry.

There’s a reason why cable channels such as History and Discovery run seemingly endless loops of shows like How It’s Made and Modern Marvels. Humans are curious animals. It’s not just enough to wonder what is inside a Twinkie, but how did it get in there? So, if you’re looking for something interesting to do this summer, take a factory tour. 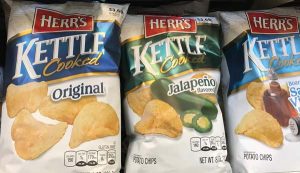 As proud members of group “barbecue,” my family and I stepped into a small theater attached to the Herr Foods visitor’s center for a short film on the history of James Stauffer Herr. With the assistance of his wife, Mim, Mr. Herr started the snack company by purchasing a small potato chip company and the one vehicle that was used to supply local Lancaster purveyors. This was in 1946. Herr Foods now goes beyond potatoes, and on our tour we learned about sourdough pretzels, tortilla chips and some of their newest products like Veg-ables!

Walking the tour, we moved from building to building, first stopping at the pretzel facility where thousands of crunchy snacks rolled past on conveyor belts. Our vantage point from above the production floor allowed us to see the entire operation and the seemingly endless collection of packaging materials ultimately bound for places all over the East Coast. Once in the potato chip packaging area, my mouth started to water. Employees oversaw bag after bag of freshly filled chips that featured an array of flavors (hot sauce, Old Bay, salt-and-pepper, etc.). Our tour guide donned safety gear, opened the door to the frying room and pulled fresh, warm chips from the belt and deposited them in our cupped hands.

Depending on the amount of questions the group poses, tours take just over an hour and come with a to-go snack. 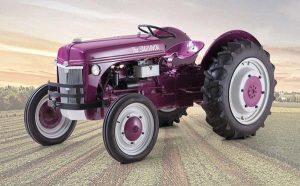 New Holland Agriculture’s Survivor Tractor – a fully restored 9N purple tractor – is touring dealerships around the country this year. The purpose of the tour is to raise awareness and funding for cancer research. The initiative kicked off last year when New Holland purchased the tractor from the owners of Wolgemuth Auction in Leola. Together, the companies donated the proceeds of the sale ($32,000) to the Ann B. Barshinger Cancer Institute. The tour is also being held as part of New Holland’s commemoration of the 100th anniversary of the first mass-produced tractor.

As much an American icon as its big green competitor, New Holland Agriculture has been supplying hardworking men and women with farm equipment since 1895. While New Holland tractors have been featured in music (Backroad Song by Granger Smith) and spotted on CBS’ The Amazing Race, most Lancastrians associate the big, blue machines with their tiny namesake borough in the eastern part of the county.

At the age of 26, Abe Zimmerman – described by the factory tour guide as a mechanical genius – opened New Holland Machine Company, which became the foundation for the global giant New Holland Agriculture. Zimmerman started with a wind-powered, stationary corn cob mill, which sold for $18 in 1899. Not satisfied, he went on to develop a hit-and-miss engine and patented a tapered water jacket in 1903, which made the machine “freeze proof.” Along with a dozen other pieces of early equipment, an example of the engine is on display at the start of the tour where visitors don reflective jackets, safety glasses and headsets.

Following the blue lines painted on the floor and led by a retiree from the plant, guests are led through the baler assembly line – the tractor-pulled piece of gear, which packs hay into manageable rolls for transportation and storage – from start to finish. Every piece of the baler is manufactured on-site. Computer-aided lasers cut thick sheets of metal. Employees hand-feed powerful brakes to bend and form pieces. Powder coating rooms turn raw materials into lustrous, finished pieces.

The tour takes over an hour, and there are no stops. Today, red and yellow New Holland balers come in all shapes and sizes, the hallmark of the agricultural industry in Lancaster County … and beyond! 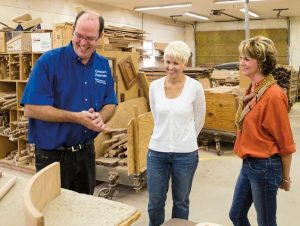 Technically located in Lancaster County, but still a participating member of the York Factory Tours program, George’s Furniture is off the beaten path in Marietta. This informal tour provides a behind-the-scenes look at the family business’ woodshop and how George’s Furniture creates its beds, tables and chairs.

Our tour started off with a demonstration of strength as owner Chris Horst lengthened a section of a large dining room table and promptly sat on the metal and wood guides suited for expansion leafs. I expected to at least pick up a few pieces of shattered wood – if not Chris himself – but the table easily held his weight. Flipping over this and every piece of George’s Furniture reveals the signature of the craftsman who created it. It is a mark of pride and dedication to quality not often seen anymore.

The short tour concludes in the showroom where visitors can see some of the earliest pieces created by founder George Martin, who started the business in 1970. 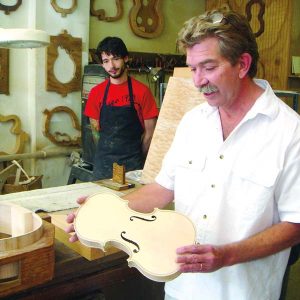 Across the river, York holds the self-proclaimed moniker of Factory Tour Capital of the World. Who knew? I’d always known the Harley-Davidson factory tour was a big draw, but after learning children under the age of 12 are only able to visit the Tour Center and are not allowed on the factory tour, I decided to go another route with the family.

I found Bluett Bros. Violins on the York visitor’s guide website and gave a call to schedule a visit. On-site we were met by Mark Bluett, who has been running his business as a Master Luthier since 1984. A personable soul, Mark let us in on his history of instrument-making from his first attempt that was scuttled into his mother’s fireplace at the age of 12, to his recent Peabody Institute contest-winning violin, which beat out the sound of classic, collectable violins.
Mark’s hands have fashioned over 1,600 instruments to date. Not limited to violins, his shop produces guitars, cellos and many other unique stringed instruments. On display was an ornate Bouzouki, an instrument with ancient roots now popular with Irish folk music (see the “Tartan Terrors”).

Bluett Bros. Violins is a small shop, and it seems the tour lasts about as long as you want to stay and listen. As our tour was ending, Mark asked if we wanted to see his stock of horse hair used for making bows. From a cardboard tube he pulled out a long horse tail blonder than any I’ve ever seen on anyone’s head. It was a highlight of the day for the kids.

Over the last four months, Uptown & Down writer Michael C. Upton has been scouring the county in search of the best appetizers Lancaster area restaurants have to offer. He’s been posting to Instagram, Facebook and Twitter with the hashtag #LanCoTizer. Join in the fun! Take a photo of the appetizer you order, post and tag with #LanCoTizer. The September edition of Uptown & Down will take a closer look at some of these amazing eats. Instagram.com/p/BTolQmbDoIB 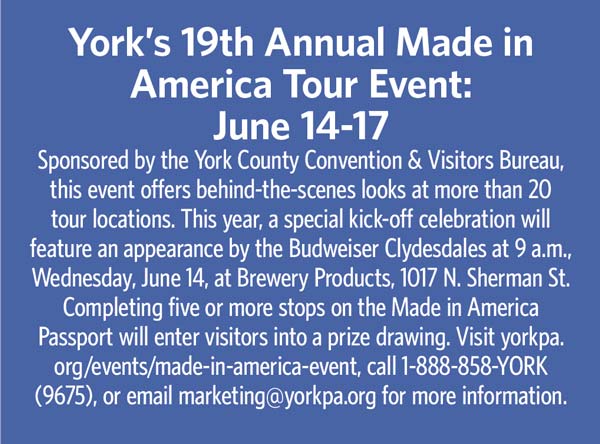