Regardless of who wins the presidential election, a new fashion influence will be inhabiting the White House. Will it be Hillary Clinton and her practical pantsuits or Melania Trump and her European sense of style?

While it may seem to be a frivolous question, consider that the election’s outcome will inevitably have an effect on Seventh Avenue and ultimately trickle down to department stores, Main Street boutiques and e-commerce. Retail plays an integral role in the nation’s economy, and its performance is not only charted on a monthly basis, but it’s also a regular topic on news shows and financial channels.

Like the polls indicated in early September, the electorate – or in this case, the designers participating in New York Fashion Week– were equally divided between Clinton and Trump. Two distinct looks ruled the runways: strong/powerful and pretty. Ironically, a relatively new designer may have pinpointed what women really want to wear: women want to look strong and powerful and pretty. The designer’s name? It would be Ivanka Trump. 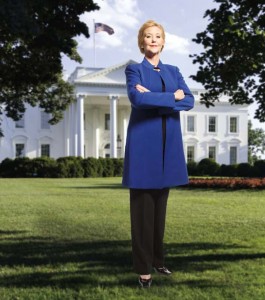 Saturday, October 1, was an unusually busy day at the Park City Bon-Ton. Women waiting to check out couldn’t help but notice the cobalt-blue jackets that were on display next to the service center in the suiting department. “Look, mom, a Hillary Clinton jacket. You should get it,” said a girl, who appeared to be a tween, to her mother. “Why would you say that?” the mother – obviously not a Hillary fan –replied.

Another shopper, who appeared to be in her early 60s, loved it and bought it on the spot. A millennial-aged shopper also brought one to the counter, but she hesitated when her boyfriend pointed out that it was Hillary-esque. She decided to buy it anyway and accessorize it with a sparkly red elephant pin. “Why can’t she just wear a dress sometimes?” the millennial asked wardrobe consultant and Ralph Lauren specialist Carol Biechler of Hillary’s fashion choices.

Carol replied with an answer that Baby Boomers would appreciate. The fact of the matter is the women of this generation have gone from being hippies to, well, being hippy. The long, loose jackets favored by Hillary Clinton skim the body and hide a multitude of “issues.” And, as Hillary has often admitted, her legs are not her best asset, which is probably why she favors pants.

Still, Hillary’s no-nonsense-pantsuit look has evolved. Internet rumors credit Anna Wintour, the editor of Vogue, for recently taking Hillary under her wing for some fashion coaching. Indeed, the fruit-inspired colors have been replaced by neutrals and strong hues such as cobalt, red and black.

Jill Brown, a PR specialist and event planner, channeled Hillary for our photo shoot. “I can rock a pantsuit,” she laughed when asked if she’d take on the assignment.

This year’s presidential campaign prompts Jill to think back to her days as the PR director for Doneckers. “We helped many of our customers choose gowns for the inaugural balls,” she says.

Jill wears a cobalt-blue jacket and black shell by Arthur S. Levine for Tahari. Pants by Tommy Hilfiger. Jewelry from Relativity. All courtesy of the Bon-Ton (bonton.com). 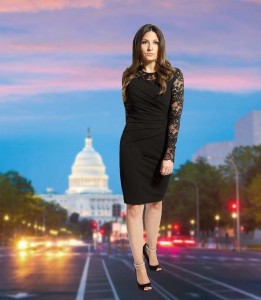 At 5’11”, Melania Trump could probably wear a potato sack and look impeccable.

Now 46, Melania’s look has changed since her January 2005 wedding to Donald Trump. The former model, who became a U.S. citizen in 2006, has gone from wearing the brightest of colors to favoring hues ranging from cool neutrals to dramatic black. She was also known to wear pantsuits at one time, only hers entailed bustiers and tight-fitting leather pants.

Now, however, haute couture is her calling card. According to an article in the New York Times, she “has definitely moved in a more refined, elegant direction over the past 10 years.” In Carol’s estimation, she “has created a ladylike look for herself yet has retained some of her European sultriness.” Consider her latest look that entails form-fitting dresses that are topped with matching coats that she wears like a cape, creating a very businesslike, but chic, look.

Melania also likes to honor her European (Slovenia) roots through fashion. She’s her own stylist and apparently likes to shop online. The white, bell-sleeved dress she wore to deliver her convention speech is from Serbian-born, London-based designer Roksanda Ilincic. According to various Internet sites, she ordered the $2,195 dress through net-a-porter.com. She paired the dress with nude heels from Christian Louboutin.

If Melania ever gets into a quandary about what to wear, she can always turn to her step-daughter Ivanka. Again, according to Internet innuendo, Ivanka wore a $138 dress from her ready-to-wear collection during her endorsement speech at the Republican Convention.

Briana Hess is somewhat of a “foreigner” in Lancaster (or, as locals like to say, “She’s not from around here”), as she hails from Alabama. She’s the assistant editor of Lancaster County magazine and is a member of this year’s Leadership Lancaster class.

Briana wears a black cocktail dress from Ivanka Trump. Details include a ruched waistline and illusion lace neckline and sleeves. The heels – with rhinestone ankle straps – are from Nina New York. Earrings are from Betsey Johnson. The Bon-Ton is this area’s exclusive source for Ivanka Trump fashions. 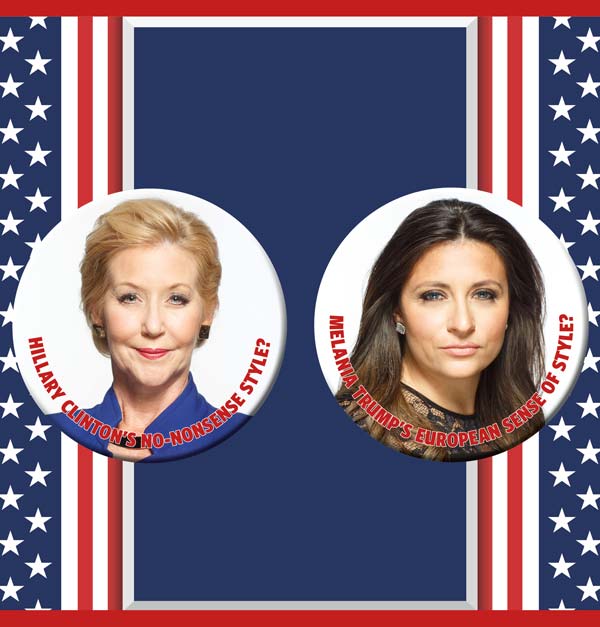